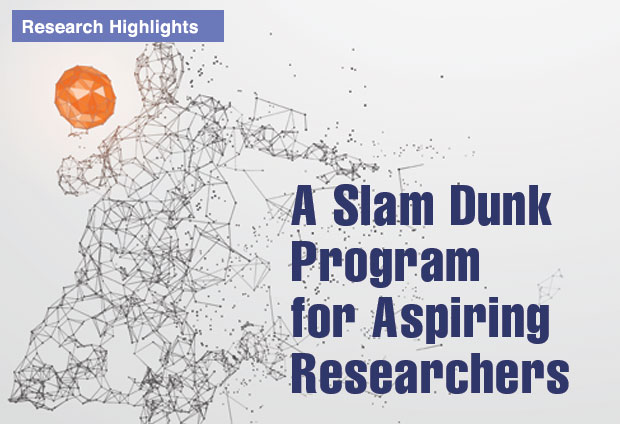 The postdoctoral research experience is a pivotal one for many scientists. During this time, they dig into the deepest technical details of their disciplines to advance scientific understanding. One challenge postdocs face is aptly communicating their often highly technical research to nonexperts in their field. To help them overcome this challenge, two years ago, the Laboratory’s University Relations and Science Education Office, led by Annie Kersting, launched a friendly competition. Called the Research Slam, the competition invites postdocs to each give a three-minute presentation about their research for a chance to win monetary prizes.

The Research Slam is orchestrated in two rounds. Workshops, seminars, and web resources are available to help postdocs prepare their presentations. Finalists also benefit from one-on-one coaching and have the opportunity to present to judges Director William Goldstein and members of his senior management team. Kris Kulp, director of the Laboratory’s Institutional Postdoc Program, says, “The biggest benefit of the Research Slam is helping postdocs improve their communication and presentation skills. The event forces them to think about the most important aspects of their work.”

First-prize winner Ashley Campbell agrees with the tenet of the competition. “The experience pushed me to be a better communicator. As scientists we have a duty to effectively relay our findings to the world,” she says. Altogether, 13 finalists were chosen from the 49 entrants who competed in the 2017 Research Slam. The diversity and quality of their research is well represented by the four prize winners, who presented on subject matter ranging from biology and particle physics to nuclear science and biosensors. 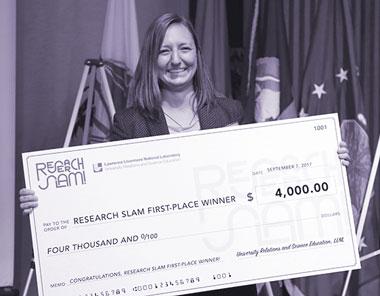 Ashley Campbell, a postdoctoral researcher in the Laboratory’s Nuclear and Chemical Sciences Division, was the 2017 Research Slam first-place winner.

In January 2016, Campbell, a postdoctoral researcher in the Laboratory’s Nuclear and Chemical Sciences Division, visited the Luquillo Experimental Forest (LEF) in Puerto Rico—the only tropical rainforest in the territorial United States—to collect soil samples for her study into how climate change is affecting smaller scale ecosystems. (See S&TR, April/May 2016, Uncovering Dirty Secrets about Soil Carbon.) She says, “We are investigating how microbes in the soil survive in an ever-changing environment.”

Microbes living in the soil feast on organic matter and regularly expel greenhouse gases, such as carbon dioxide or methane, as byproducts of their metabolic processes. Microbes are a vital part of carbon cycles, which maintain the balance between natural carbon emissions and carbon stored in soils. However, what the microbes eat—and thus how much carbon dioxide they release—varies depending on environmental conditions.

Funded by a Department of Energy (DOE) Early Career Research grant awarded to Laboratory biologist Jennifer Pett-Ridge, Campbell and postdoctoral colleagues from Lawrence Berkeley National Laboratory and the University of California at Berkeley created an experiment to analyze whether new or old carbon sources are preferentially eaten by microbes under varying conditions. The scientists placed soil in jars under 4 different environments and monitored them for 44 days. They found that microbes prefer new carbon sources, such as just-fallen leaves, because they are easier to break down. However, in oxygen-rich environments the microbes will also eat older carbon sources because they can make the oxidative enzymes needed for digesting it. When oxygen is lacking for extended periods of time, the microbial community adapts. Campbell says, “Iron-cycling microbes can pop up in these environments. Microbes will use iron as an electron donor or acceptor (in lieu of oxygen) to help them eat.” 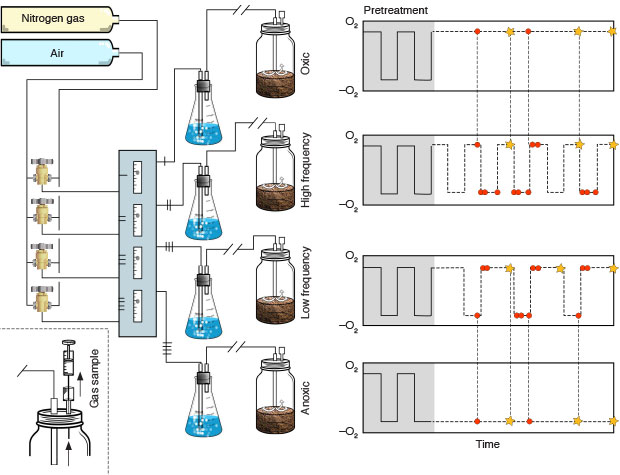 Microbes under 4 different soil conditions were monitored for 44 days to determine whether microbes preferentially eat new or old carbon sources. The red dots and stars indicate times when the microbes were harvested—occurring immediately before and after a redox switch, for example, when fluctuating from oxygen-deficient (anoxic, –O2) to oxygen-rich (oxic, O2) conditions and vice versa. (Rendering by Alex Paya.)

Looking forward, the team plans to analyze LEF soils harvested after the 2017 hurricane. Campbell says, “We want to evaluate how soils respond to hurricane conditions and how microbes change after a natural event.” Ultimately, the results of Campbell’s research may provide insight into global phenomena arising from climate change, and may also be useful for climate modeling.

The Universe and Neutrinos

Prevailing theory suggests that at the time of the universe’s birth, the Big Bang created an environment wherein matter and antimatter existed in equal quantities. However, since the two substances annihilate one another, scientists struggle to understand why the universe today consists primarily of matter. Neutrinos—tiny, nearly massless particles with no charge—may be at the heart of solving this cosmic puzzle.

Research Slam second-place winner Jason Brodsky, also a postdoc in the Laboratory’s Nuclear and Chemical Sciences Division, is involved in a multi-institutional collaboration called the neutrinoless Enriched Xenon Observatory (nEXO) to better understand the nature of the neutrino. “The nEXO project is looking to prove the existence of neutrinoless double beta decay—otherwise known as neutrino self-annihilation,” he says. “If we can prove that neutrinos can annihilate themselves, it would validate a particular theory of the universe.” (See S&TR, July/August 2016, A Detector to Study the Neutrino's Nature.) 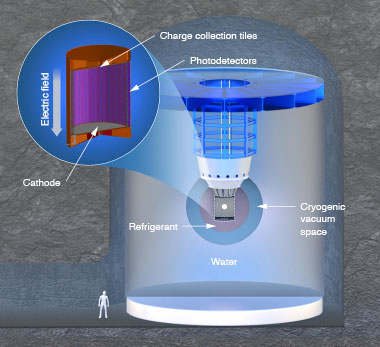 Researchers are working on the engineering requirements for the neutrinoless Enriched Xenon Observatory detection vessel, which will include a central time projection chamber (inset) and a containment system comprising a low-radioactivity refrigerant, a cryogenic vacuum space, and a water tank equipped with photomultiplier tubes to track and reject background signals. (Rendering by Ryan Chen.)

Neutrino self-annihilation would require that the particle and its antiparticle are one and the same, defying conventions outlined in the Standard Model of physics. Brodsky and colleagues are designing a large, heavily instrumented tank filled with enriched liquid xenon-136 for detecting the decay. “The size of the container will help us have a clean center that is far from everything else in the chamber to prevent signal interference and better enable us to detect the decay process,” he says. “Today, the big focus is on the detector’s engineering requirements.”

With nEXO clearly on its way to becoming a reality, Brodsky is excited for what the future holds. He says, “I like thinking about the influence my research could have on future science and technology.”

Two Research Slam participants, Tony Nelson and Allison Yorita, tied for third-place honors for their work in criticality safety and bioscience, respectively. Nelson, a postdoc in the Laboratory’s Nuclear Criticality Safety Division, presented on his efforts to improve the safety of fissile material operations through improved benchmarks for intermediate-energy systems—that is, those that include a nuclear material and a small amount of a moderator, such as water or oil.

In the mid-1940s, a ball of plutonium known as the Demon Core caused two fatal accidents when it was unintentionally brought to critical mass inside a laboratory. Today, nuclear safety engineers use computer simulations to plan and test fissile material operations. Criticality engineers test the simulations’ accuracy using data from benchmark experiments wherein physical materials are brought to their criticality point. The lack of benchmarks for intermediate-energy systems is a major concern. Nelson says, “A certain amount of a fissile material by itself may not be critical, but when it is combined with another element, it can potentially start a nuclear fission chain reaction and release radiation.”

In a project funded by the DOE Nuclear Criticality Safety Program, Nelson and colleagues from Livermore and Los Alamos national laboratories, the Naval Nuclear Laboratory, and L’Institut de Radioprotection et de Sûreté Nucléaire in France designed a test bed to quickly and easily establish missing benchmarks. The design includes stacking uranium plates, polyethylene, and the material to be benchmarked (in this case, hafnium) using remote-controlled machines. Plates are gradually added to the system until it reaches its criticality point. Experimental results are then compared to those from computer simulations to validate radiation transport software. Nelson says, “Our test bed is unique because we can easily adjust the energy and swap out the material we are studying.” 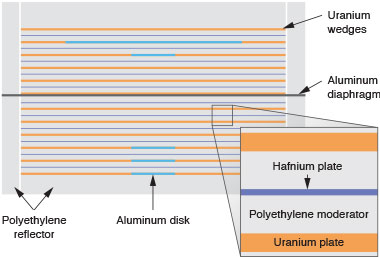 To improve intermediate-energy nuclear benchmarks, Laboratory postdoc Tony Nelson has developed a test bed wherein uranium, polyethylene, and hafnium plates are stacked in a repeating pattern to slowly bring the assembly to critical mass. A polyethylene reflector surrounds the assembly.

The final Research Slam winner, Yorita, is a postdoc in the Laboratory’s Materials Engineering Division who is using her expertise to help rehabilitate victims of the nation’s opioid crisis. Although scientists understand the basic physiological response of drug addiction, they have not discovered which parts of the brain are most affected. Funded through the Laboratory Directed Research and Development Program, Yorita is developing a sensor to monitor the brain’s chemical interactions and possibly help researchers determine the cause of drug addiction. (See S&TR, October/November 2016, Peering into the Brain with Chemical Biosensors.)

Yorita’s device is designed to “listen” to chemical interactions using an enzyme known as glutamate oxidase. “In experiments, an electrode array containing glutamate oxidase is implanted into the brain of a specimen,” explains Yorita. “We then apply a voltage to the electrodes. When the enzyme layer reacts with a specific chemical, it generates hydrogen peroxide, which creates a spike in the electrical current. We are evaluating different areas of the brain and the frequencies at which these signals are being released.” In addition, Yorita is studying how to extend the life of the device in vivo via an enzyme stabilization material. The goal is to increase the device’s lifetime to one year—the amount of time it generally takes to treat opioid addiction.

Slam Ramps Up in the Summer

For Campbell, Brodsky, Nelson, and Yorita, the postdoc Research Slam not only allowed them to more effectively communicate their work, it also brought visibility to their projects. “If you put effort into it, the program can help expand your capabilities,” says Campbell. Brodsky adds that strong communication skills, such as those developed through the Research Slam, are essential to advocating the necessity of basic science research. 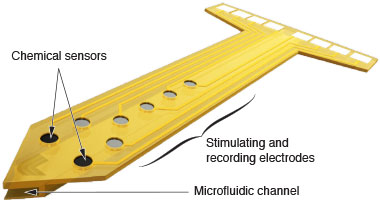 Biosensors are fully packaged devices slightly wider than a human hair. Using membrane coatings for chemical sensing, the sensors can “listen” to chemical and electrical signals in the brain.

Entries are submitted each summer, and the next event is scheduled for October 2018. Kulp urges postdocs who have previously entered the Research Slam but did not win to re-enter the following year. In fact, Campbell participated in her first Research Slam in 2016, learned from the experience, and came back to win one year later. Says Kulp, “It’s a lot of work, but the program serves as a valuable tool for improving presentation skills and boosting career development.”