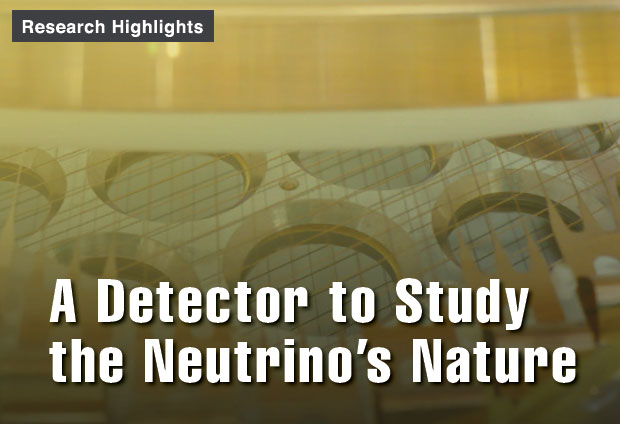 A Detector to Study the Neutrino’s Nature

Scientists have encountered many mysteries in the search to find and understand elementary particles, the most basic units of matter. Some elementary particles, such as the electron, are relatively well understood, while others, such as the elusive neutrino, present the physics community with many unanswered questions. One of those questions concerns a process called neutrinoless double beta decay (NDBD)—a radioactive decay process that, if detected, would have significant implications for the field of particle physics. Livermore physicist Mike Heffner says, “Furthering our understanding of neutrinos and their properties could provide tremendous insight into the fundamental makeup of our universe.”

The neutrinoless Enriched Xenon Observatory (nEXO) collaboration is poised to dive deeply into the behavior of neutrinos, the lightest massive particles known to science. Funded by the Department of Energy’s (DOE’s) Office of Science and the National Science Foundation (NSF), the nEXO collaboration is a joint effort among Lawrence Livermore, SLAC National Accelerator Laboratory, Stanford University, and several other U.S. and international institutions to detect the NDBD phenomenon and further characterize the neutrino. The Nuclear Science Advisory Committee, which advises DOE and NSF on basic nuclear science research, recently identified detecting NDBD as top on its list of scientific priorities for the near future. A selection process is underway to award a grant to the project that shows the most promise, and nEXO collaborators have their eye on the prize.

An Imbalance in Matter

Vastly abundant in the universe, neutrinos are produced by nuclear fusion in stars and through radioactive decay. In addition, countless neutrinos created during the Big Bang still travel through the universe. With no electric charge and nearly no mass, neutrinos interact so weakly with matter that they are extremely difficult to detect and measure. In fact, each second billions of neutrinos pass through a human body and everything around it at nearly the speed of light without disturbing anything.

The current understanding of elementary particles, as described in the Standard Model of physics, dictates that all particles—matter—with mass and charge have a complementary antiparticle—antimatter. Yet neutrinos may not follow this tenet. In 1937, Italian physicist Ettore Majorana postulated that a particle with no charge could function as its own antiparticle. Scientists theorize that the neutrino may be such a particle, and if so, the nEXO project aims to confirm it. “A central, still unanswered question is why the universe is largely composed of matter instead of equal parts matter and antimatter,” says Giorgio Gratta, a professor of physics at Stanford University and the nEXO spokesperson. “If we can determine that the neutrino is a Majorana particle, we can gain insight into this mystery.”

Neutrinos are known to come in three distinct “flavors,” each with a different mass, and they can oscillate between the states. Physicists postulate that if an extremely light neutrino exists, there might also be an extremely heavy neutrino that has never been observed. “If the neutrino is a Majorana particle,” Heffner explains, “the very heavy form of the neutrino would have decayed rapidly just after the Big Bang. As the universe developed, this asymmetry would have magnified, resulting in the imbalance between matter and antimatter that we observe today.” 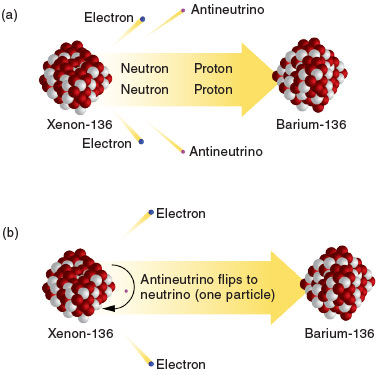 (a) In the double beta decay process, two neutrons simultaneously convert to two protons, emitting two electrons and two electron antineutrinos that share the energy generated from the decay. (b) During neutrinoless double beta decay (NDBD), the nucleus would emit only electrons, which carry the full energy of the decay, because the antineutrinos would have been reabsorbed as neutrinos.

In normal beta decay, a neutron decays into a proton with the emission of an electron. The emitted electron is accompanied by what physicists identify as the neutrino’s antiparticle, or antineutrino. Some isotopes undergo the rarer process of double beta decay, in which two neutrons simultaneously convert to two protons, emitting two electrons and two electron antineutrinos that share the energy generated from the decay. If the NDBD phenomenon exists, the decaying nucleus would emit only electrons, which carry the full energy of the decay, because the antineutrinos would have been reabsorbed as neutrinos. Thus, NDBD is only possible if the neutrino is a Majorana particle.

“A previous experiment searching for NDBD, called EXO-200, provides the basis for our work,” says Livermore mechanical engineer and nEXO project manager Allen House. Similar to its predecessor, the nEXO detector will use a vessel filled with liquid xenon, chilled to approximately –108 degrees Celsius. Heffner explains, “The liquid is enriched with xenon-136 (136Xe), one of a few dozen nuclei that undergo standard neutrino double beta decay. Xenon-136 was selected because of its relatively high-energy release during double beta decay and its qualities as a detector material.” Whereas EXO-200 contained about 200 kilograms of enriched xenon, nEXO will use 5 tons (5,000 kilograms)—the entire amount of 136Xe produced annually through global production of xenon. “The more xenon, the more likely we’ll see NDBD,” says Heffner.

In the detector, when a xenon atom undergoes double beta decay, it emits two electrons. These electrons will then interact with other xenon atoms, producing fluorescent light, or scintillation, and a cloud of electrons. Photodetectors that line the nEXO vessel will detect the light, while the charge of the electron cloud will be transported and recorded with the help of an electric field. By detecting both the light and charge separately, the detector provides information about the time, three-dimensional location, and energy deposit of the decay. Heffner says, “With NDBD, we won’t see the neutrinos at all. If all of the decay energy has gone into the electrons, the signal would look like a little spike at the end of the electron energy spectrum—if we see that spike, we’ll know the neutrino is its own antiparticle.”

For nEXO, Livermore researchers are providing project management, leading the engineering efforts, and spearheading simulation work. Staff scientist and simulation expert Samuele Sangiorgio is using high-performance computers to understand how much background radiation the experiment can tolerate. These data will inform decisions regarding the choice of construction materials and the design of the detector components. “Simulations can also tell us how signals form in the detector, should an NDBD or a background event occur, and we can use this information to improve the experiment’s sensitivity,” says Sangiorgio. Livermore’s simulations group is also working with universities to model the detector’s components before manufacturing. 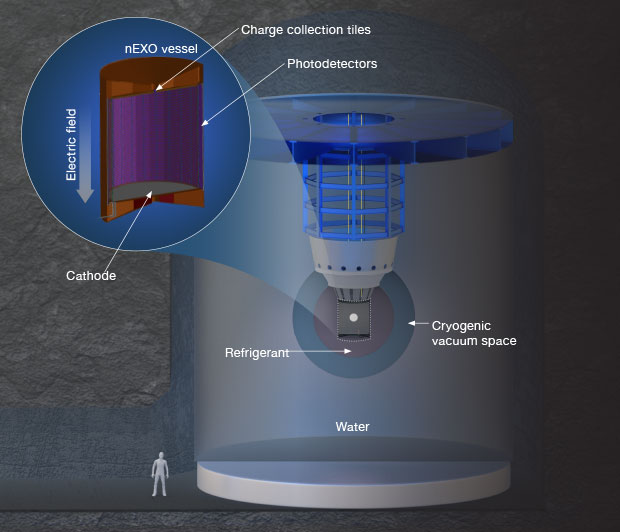 The nEXO vessel will contain 5 tons (5,000 kilograms) of enriched liquid xenon for observing the NDBD process. (inset) Inside the vessel, photodetectors will record scintillation light produced from the decay process, while an electric field transports the electrons to collection tiles that record their energies. To reduce the risk of interference from background radiation, nEXO will be located underground and have a containment system comprising a low-radioactivity refrigerant, a cryogenic vacuum space, and a water tank equipped with photomultiplier tubes to track and reject background signals. (Rendering by Ryan Chen.) 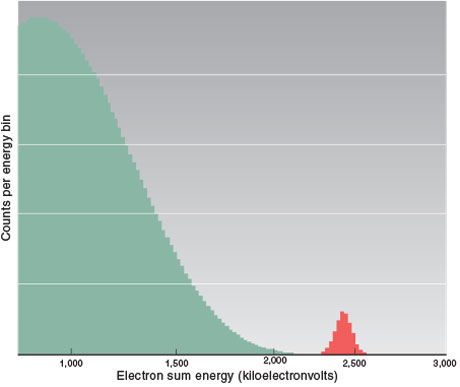 The expected location for the nEXO detector is Canada’s underground Sudbury Neutrino Observatory (SNOLAB), one of two facilities where scientists discovered that neutrinos have mass. (This research won the 2015 Nobel Prize in physics). The detector will be located 2 kilometers underground in a mine shaft to protect it from background radiation signals produced by cosmic rays. In addition, the natural radioactivity of the surrounding rock could mask the NDBD signature. To reduce the risk of interference from these sources, the detector vessel will be surrounded by a containment system comprising a low-radioactivity refrigerant, a cryogenic vacuum space, and a water tank equipped with photomultiplier tubes to track and reject background signals.

“Our nEXO project is uniquely equipped to take on the challenge of revealing NDBD and characterizing the neutrino,” explains Heffner, whose own work is funded through Livermore’s Laboratory Directed Research and Development Program. “We’re bringing together DOE resources, scientific and academic institutions from the San Francisco Bay Area, and national and international collaborators, including researchers from Canada, China, Germany, South Korea, Switzerland, and Russia.” Gratta says, “This project exemplifies the idea that physics knows no boundaries—irrespective of political events, scientists from all over the world are united in their common pursuit of advancing fundamental science and understanding the elusive neutrino.”