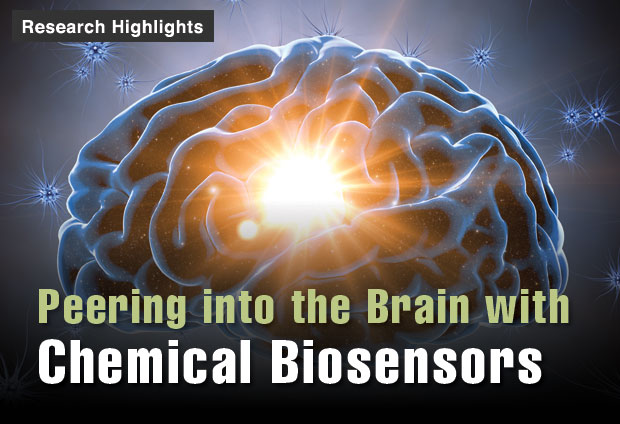 Peering into the Brain with Chemical Biosensors

The human brain is a biological marvel that, when functioning properly, allows people to survive in endlessly changing environments, engage in complex behaviors, and live full and productive lives. Scientists estimate that the brain consists of between 80 and 100 billion neurons, with as many as 100 trillion interconnections among them. Impressively, more than 100 types of chemicals called neurotransmitters carry signals across these interconnections from one neuron to another, enabling the human body to carry out its requisite tasks.

For as much as scientists know about the brain and its sophisticated workings, many more aspects of this impressive organ remain a mystery. Measuring biochemical changes within the brain, for example, is slow and difficult. In fact, no tools exist today that allow scientists to continuously measure real-time changes in neurotransmitters, or most other chemicals in the body, for extended lengths of time. Yet research on conditions such as Parkinson’s disease, chronic depression, post-traumatic stress disorder, and drug addiction suggests that their causes are related to imbalances in neurotransmitter production and behavior.

A group of researchers, led by Lawrence Livermore chemical engineer Vanessa Tolosa, is working to address the need for better technologies to study the chemical fluctuations in the body. Her team is developing biosensors that can be implanted in the brain to measure neurotransmitters as well as other signals of brain activity. In addition to Tolosa, the team includes Livermore’s Anna Marie Belle, Allison Yorita, Anna Ivanovskaya, Jeanie Pebbles, Supin Chen, Brian Baker, and Shalini Mabery, as well as collaborators from Aqua Regenerative Therapies, LLC, and the University of Illinois at Urbana–Champaign.

The work, funded by the Laboratory Directed Research and Development Program, could result in a powerful new tool for scientists to explore the etiology of brain diseases and a real-time monitoring capability for patients to manage their health conditions and adjust their treatment to match their brain activity. Biosensor implants could also open the door to groundbreaking treatments that target specific organs in the body while leaving the rest untouched. Such sensors could also provide an alternative to pharmaceuticals, which circulate throughout the entire body, increasing the risk of side effects. 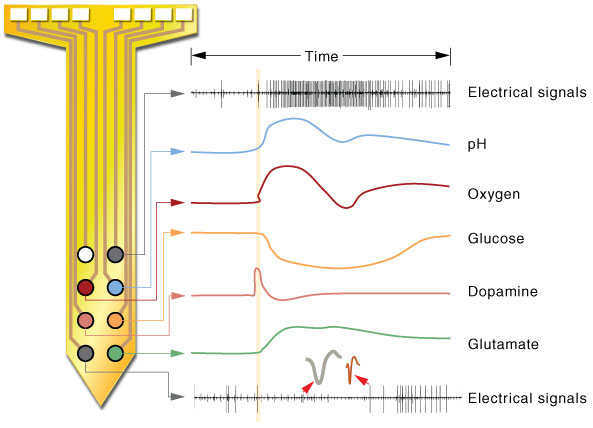 Livermore researchers are developing a real-time biocompatible sensor array capable of simultaneously measuring several biomarkers—pH, oxygen, glucose, electrical activity, and neurotransmitters such as dopamine and glutamate—in the brain. No such sensor exists in the marketplace today.

One Sensor, Many Measurements

“More than 500 quadrillion chemical reactions happen in our bodies every day,” says Tolosa, “across all size scales, from the single-cell level to the multi-organ level.” Many diagnostic technologies, such as electrocardiography and electroencephalography, can record the body’s electrical signals in real time through external sensors attached to a patient’s skin. However, sensors that measure continuous, real-time chemical changes are much more difficult to engineer because they must be implanted in the body’s internal tissues. Eventually the body rejects the sensor as a foreign object—a biologically incompatible material—limiting the device’s lifetime.

Glucose sensors for diabetics are the most advanced real-time chemical monitoring system on the market (and the only sensors produced on a large scale), but they last only seven days before the body’s defense mechanisms render the sensors ineffective and they must be replaced. Tolosa says, “Our goal is to develop continuous, real-time, biocompatible sensors that can measure multiple biomarkers on a single platform and that will last considerably longer than today’s commercially available sensors.” The team’s sensor will be able to simultaneously measure physiological changes such as pH; oxygen level; glucose; electrical activity; and neurotransmitters, including dopamine and glutamate, which are indicators of a person’s ability and motivation to learn and form memories.

Previous work by Tolosa and others in Livermore’s Neural Technologies Group has led Laboratory researchers to develop flexible, polymer-based implants capable of recording electrical signals in the brain and providing deep brain stimulation to help treat neural disorders such as depression. Lawrence Livermore makes these custom-built devices in-house, using the same photolithographic process that the electronics industry uses to manufacture integrated circuits. Tolosa’s group is building on this past success by incorporating biosensor sites on the implant that can record chemical changes, as well. Biochemical indicators on the sensors react with the target chemical to produce a measurable signal. 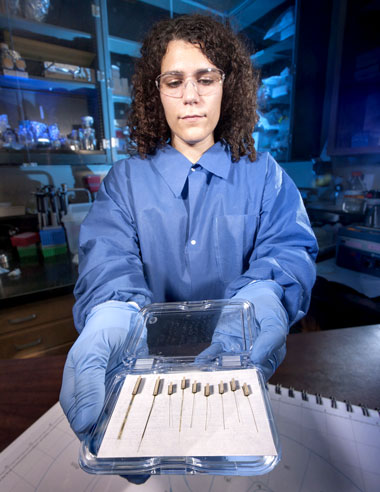 In her laboratory, chemist and postdoctoral scholar Anna Marie Belle is custom-building, testing, and characterizing biosensor prototypes. Detecting the target neurotransmitter requires establishing its specific electrochemical signature. Some important neurotransmitters are non-electroactive, meaning they do not have electrochemical signatures. To be detected, these neurotransmitters, the most common being glutamate, must react chemically with other molecules deposited within the biosensor. As part of the device testing process, Belle uses an enzyme known to react exclusively with glutamate to produce hydrogen peroxide. The hydrogen peroxide then reacts electrochemically with the sensor to release an electron whose signal is detected, amplified, and recorded by the sensor. More electron detections mean a higher glutamate level. 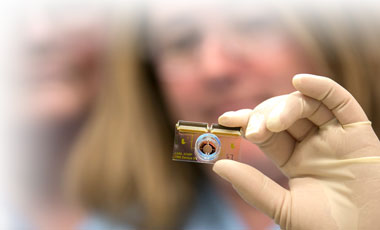 Biosensor prototypes have been tested on Livermore’s iCHIP (in vitro chip-based human investigational platform)—a miniature external replication of the human body, integrating biology and engineering with a combination of microfluidics and multielectrode arrays. (Photo by Julie Russell.)

The team has tested their biosensor prototypes in animal brains and on iCHIP (in vitro chip-based human investigational platform), a silicon-based platform developed at Livermore that mimics several biological systems of a human body. (See S&TR, March 2014, Biosecurity Gets a Boost with Human-on-a-Chip.) Currently, Belle is characterizing glutamate sensors—studying their responsiveness and lifetime in vivo and proving that the device selectively measures glutamate and not chemical artifacts. The tests are done by surgically implanting these biosensors into the brains of live rats, then recording and analyzing sensor signals several times a day over a period of days using a measurement platform that Belle developed. These biosensors detect very small, localized changes in glutamate concentration, providing far more data than current diagnostic techniques.

Belle’s preliminary analysis of the data will help determine the efficacy, accuracy, and endurance of the prototype devices. Eventually, scientists will be able to use these advanced sensors to answer questions such as: how do the concentrations of neurotransmitters change as animals (and, eventually, humans) engage in various activities? How do stimuli and neurotransmitter measurements correlate in normal brains compared with those suffering from disease; drug addiction; post-traumatic stress disorder; or deep, chronic depression?

In addition, chemical biosensors may play a role in developing electroceuticals—bioelectronics medicine. Livermore has unique capabilities in protein engineering, biocompatible materials, advanced manufacturing, sensor development, and computational modeling that are poised to place the Laboratory at the forefront of this new area of biomedical research. “No one knows why electroceuticals work,” says Tolosa. “What’s missing is a way to monitor organs and the changes in neurotransmitter release and other chemicals during nerve stimulation.” Although in its early stages of development, the Livermore biosensor could one day help reveal the root causes of various diseases and provide advanced treatments, allowing more people to live full and productive lives.