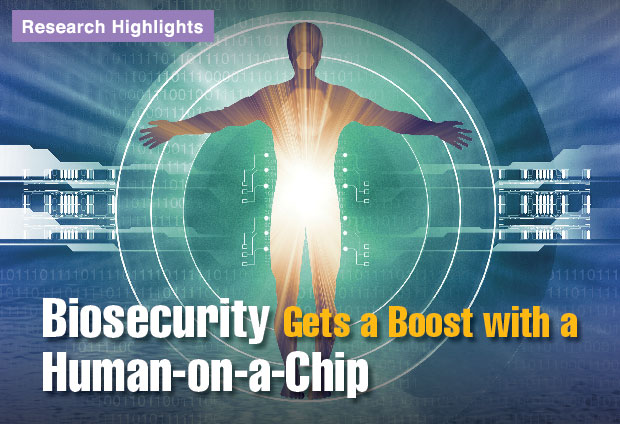 The human body is a marvel—a complex, interconnected network of organs, tissues, and vessels controlled by chemical reactions and electrical impulses. So complicated is this system that many scientists and researchers dedicate their careers to better understanding how the body functions, adapts to outside stimuli, heals after disease or trauma, and reproduces to create new life. Advances in modern medicine, drug discovery in particular, rely on the continued study of the human body to develop treatments for health problems ranging from high cholesterol and chronic joint pain to the effects of chemical exposure. However, the drug development cycle, from initial research and formulation to clinical trials and commercialization, can take years. Even after such lengthy study, about 90 percent of new drugs ultimately fail because they have unanticipated but serious side effects.

At Lawrence Livermore, a research team is working on an investigational platform that could speed development of medical countermeasures for biosecurity applications and improve the overall drug discovery process. The in vitro chip-based human investigational platform (iCHIP) combines primary human cells, tissue engineering, and microfluidics to reproduce the body’s physiological response under an array of conditions.

“iCHIP is an integrated system for testing human response,” says Satinderpall Pannu, who leads the iCHIP team of engineers, biologists, and chemists. “It includes electrical stimulation and recording, nutrient and oxygen perfusion via fluidic delivery, optical analysis, and quantitative measurements of cell health and viability.”

Thus far, the team has demonstrated the platform’s effectiveness on isolated human dorsal root ganglia (DRG) nerve cells, which form part of the peripheral nervous system. As envisioned, the complete iCHIP system will contain tissue from the stomach, liver, heart, kidney, brain, blood–brain barrier, immune system, and lungs, effectively creating what Pannu calls a “human-on-a-chip.” This technology has the potential to dramatically reduce the time needed to establish countermeasures against biological, chemical, and radiological agents and to bring new therapies to market. 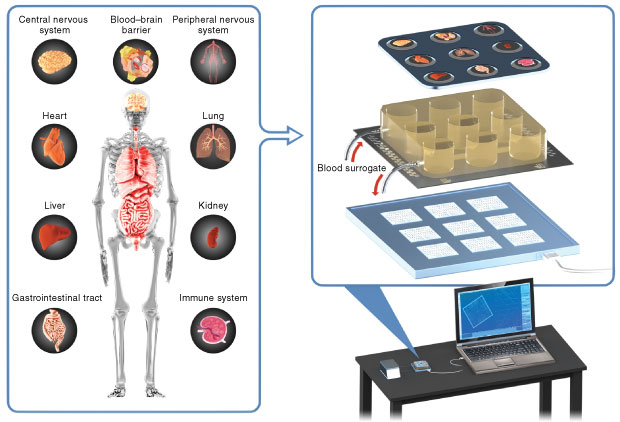 The integrated in vitro chip-based human investigational platform (iCHIP) will contain human tissue from each of the body’s major functional systems. Tissues are placed in tiny experimental wells on top of the microelectrode array.

From Retinas to Root Ganglia

According to Pannu, the current drug development process lacks an accurate and efficient experimental method for identifying whole-body effects of new pharmaceuticals. “Initial tests are conducted on animals, and regulations require testing new compounds in two species before experiments move to humans,” says Pannu. “Animal testing also involves many ethical considerations, plus animal-based models do not accurately replicate the physiological response of humans.” For example, Vioxx, a medication for arthritis and other chronic pain, showed a protective cardiac effect in rats. However, five years after the Food and Drug Administration approved the medication, it was withdrawn from the market because it increased the risk of heart attack and stroke in humans. iCHIP is designed to replace the animal-based testing model in favor of one that is physiologically relevant to humans and takes into account a larger human population, providing a more realistic picture of a drug’s effectiveness and potential side effects in advance of clinical trials.

The iCHIP technology builds on Pannu’s previous work on a retinal prosthesis designed to function inside the eye. (See S&TR, June 2012, Neural Implants Come of Age; October/November 2009, Restoring Sight to the Blind with an Artificial Retina.) The artificialretina has a microelectrode array embedded in a flexible polymer, allowing the device to move naturally in the environment and conform to the live tissue around it. The microelectrode array in iCHIP is incorporated into a microfluidic device optimized to sustain cell health and is part of a suite of tests that can monitor cell activity. The microelectrodes stimulate and record tissue response; chemical sensors measure cellular function; and fluid exchange mechanisms deliver oxygen, nutrients, and test compounds to the tissue.

The iCHIP team, which is funded by Livermore’s Laboratory Directed Research and Development Program, built its platform using DRG nerve cells—the sensory receptors of the body— to replicate the peripheral nervous system. DRGs are composed of sensitive neurons that are activated by pressure, temperature, and chemical stimuli. They thus serve as an excellent model for studying the neurotoxic effects of chemicals in the body. For the iCHIP research, the Livermore team obtains human DRG tissues through a partnership with AnaBios Corporation—a company with extensive expertise in human tissue–based assays. The DRG tissues are derived from organ donors, and unlike tissues grown from stem cells, they are completely mature. Their fully developed pathways provide a more reliable response to stimuli.

“One of our important achievements was increasing the viability of neurons on the platform from 2 days to more than 18 days,” says Livermore cellular biologist Kris Kulp, who leads the cell culture and assay development team. “We modified the surface chemistry of the platform to promote cell growth and adhesion, adjusted cell seeding density and the population of support cells, and tightly controlled media concentrations to extend cell function.”

The team is conducting experiments to interrogate cells for a prolonged period. The ability to monitor neuron response over time is a significant advance over traditional neurobiology assay methods, which rupture the cell membrane and kill the cells. Says Kulp, “By developing methods to repeatedly monitor cell response after chronic exposure to low levels of specific chemicals, we can model realistic exposure conditions and begin to develop countermeasures.” 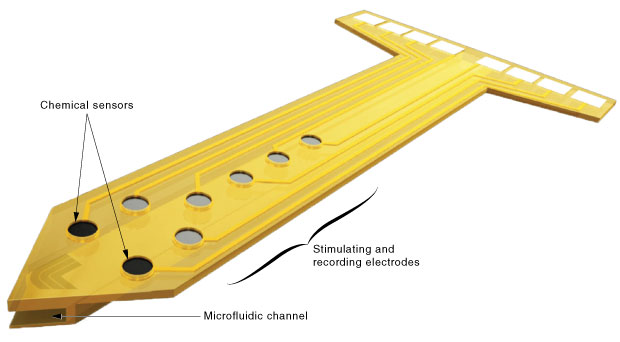 In initial validation studies for iCHIP, the team exposed DRG cells to capsaicin—a component in chili peppers that is responsible for the burning sensation that occurs when specific nervous tissue receptors are activated. For the experiments, the human DRGs were plated into tiny experimental wells on top of the microelectrode array. “Traditional assays measure the response of only one cell at a time,” says lead platform engineer Elizabeth Wheeler. “With iCHIP, we can record the response of many kinds of neurons simultaneously, giving us a better understanding of a chemical’s overall effect on the peripheral nervous system.”

Stimulating neurons triggers openings in the cell membrane, which control the movement of sodium, potassium, and calcium into and out of the cell. Ion movement across the cell membrane generates a voltage, or action potential, that can be measured. In the capsaicin experiment, the team recorded the resting and action potentials of cells exposed to low levels of the irritant for several minutes, noting changes in electrophysiology and calcium fluxes. “Our tests compared favorably to published results derived from traditional assay methods, suggesting that our platform will replicate the response of tissue in vivo,” says Kulp. “We will perform more validation assays to ensure that we can consistently achieve the right balance of neural and support cells and that the cells always respond the way we expect.”

For the next round of tests, the team will collaborate with the Laboratory’s Forensic Science Center (FSC) to measure tissue response to toxic agents and determine the mechanisms of toxicity. These experiments are the first step toward developing robust and effective medical countermeasures to known chemical agents. FSC is one of two U.S. laboratories that are internationally certified to identify chemical-warfare agents. Founded in 1991, the center supplies analytical expertise to counter chemical, nuclear, and biological terrorism and to verify compliance with international treaties.

The iCHIP technology paves the way for bioengineers in the future to anticipate and understand new and emerging biosecurity threats and develop therapies that can be translated to humans without adverse consequences. It also provides a foundation for designing human tissue–based assays to rapidly assess new drugs.

The project team is now focused on adding tissues from the central nervous system and the heart and on developing a three-dimensional vasculature scaffold, which will act as a “circulatory system” for the device. The scaffold will be built using additive manufacturing techniques and integrated with microsensors for more in-depth cell monitoring. “The scaffold will enable us to deliver reagents in a more realistic fashion,” says Pannu. “We will also be able to create a cell culture that contains more physiologically relevant cells and tissues to better answer questions about cellular processes, communication, and response to stimuli.”

In the future, the team wants to develop a method to either sustain multiple cell types in a single well or place them in electrically and chemically interconnected wells to diagnose intercellular reactions to stimuli. By building a human-on-a-chip, Pannu and his team are poised to revolutionize the way researchers analyze emerging biological and chemical threats and accelerate work on countermeasures to stop them.