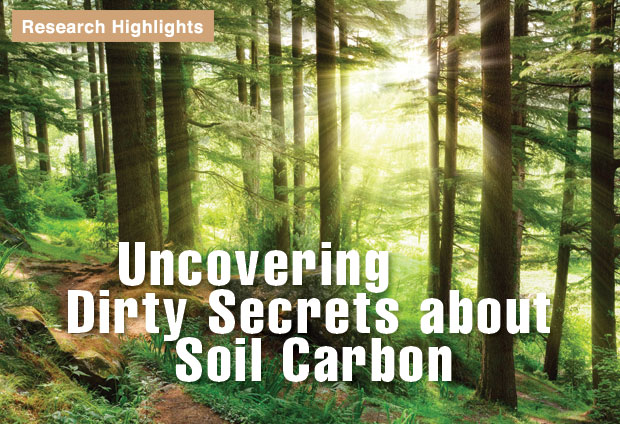 Two-thirds of the carbon in the terrestrial biosphere (land inhabited by living organisms) is stored underground as soil organic matter (SOM), a complex mixture of molecules that results from decaying plant and microbial cell material. During decomposition, carbon within SOM is either retained in the soil or released into the atmosphere as carbon dioxide (CO2). This carbon reservoir is so huge that even small increases in decomposition rates could accelerate climate change. Yet scientists still question the fundamental mechanisms that regulate decomposition rates at the level of individual microbial cells and mineral particles.

Bringing together the capabilities of two advanced, high-resolution imaging technologies, the nanometer-scale secondary ion mass spectrometer (NanoSIMS) at Livermore and the scanning transmission electron microscopy (STXM) instrument at Lawrence Berkeley National Laboratory, a Livermore-led team has uncovered some of SOM’s secrets at the microscopic level. The researchers’ discoveries provide crucial information for improving climate models and managing soil resources. Project leader and Livermore biologist Jennifer Pett-Ridge says, “By investigating the mechanisms of soil decomposition, we can more accurately predict the effects of shifting climate conditions on soil carbon sequestration and then incorporate these data into climate models.”

Funded through Livermore’s Laboratory Directed Research and Development Program, the Department of Energy’s Office of Biological and Environmental Research (OBER), and the Livermore Scholar Program, the work was conducted by Pett-Ridge, NanoSIMS laboratory lead Peter Weber, former graduate student Marco Keiluweit (now a faculty member at the University of Massachusetts at Amherst), and their collaborators at Oregon State University and Lawrence Berkeley. They carried out three projects that provide new information about the processes that influence soil decomposition. In one project, the team tracked the fate of nitrogen-rich organic compounds that are decomposed by microorganisms dwelling within forest-floor litter. A second examined the critical role of the element manganese in decomposing leaf litter. The last illustrated how organic compounds exuded from roots into the soil affect organic matter–mineral complexes and can lead to net soil carbon loss. 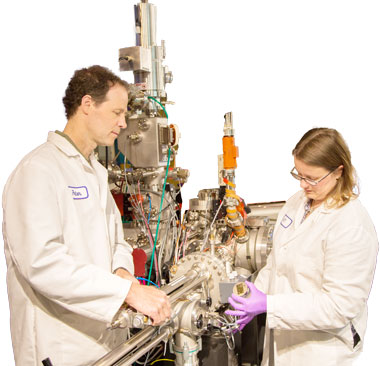 Livermore researchers Jennifer Pett-Ridge and Peter Weber prepare a sample for testing in the nanometer-scale secondary ion mass spectrometer (NanoSIMS), one of only a few such instruments in the world dedicated to isotope imaging in microbial biology and soils research. (Photo by Lanie L. Rivera.)

Nitrogen-rich amino sugars, such as chitin, are a major component of the cell walls of soil fungi, whose thread-like structures, called hyphae, provide an important source of organic carbon and nitrogen in many forest soil ecosystems. Despite its abundance, little is known about how microbes decompose chitin and how its breakdown products become stabilized in soil.

To follow the decomposition of soil fungal cell walls, the research team tagged chitin with a rare isotope of nitrogen (15N), which allowed them to trace what happens as chitin undergoes microbial decomposition. They mixed the 15N-labeled chitin with soil rich in organic matter from the U.S. Forest Service’s H.J. Andrews Experimental Forest in Oregon and let the mixture incubate. After three weeks, the team used two complementary nanometer-scale imaging instruments to determine how the 15N-labeled chitin had become incorporated into the soil. The synchrotron-based STXM instrument at Lawrence Berkeley’s Advanced Light Source helped measure the molecular composition of the soil microstructures. The researchers then used NanoSIMS to assess where the 15N isotope had migrated.

The Laboratory’s NanoSIMS is one of only a few such instruments in the world dedicated to isotope imaging in microbial biology and soils research. The machine uses a finely focused primary ion beam to erode ions from a sample’s surface. These secondary ions are then analyzed to reveal the elemental and isotopic composition of the sample’s uppermost atomic layers. Combined results from NanoSIMS and STXM show that soil bacteria assimilate the nitrogen from the chitin, then resynthesize and incorporate it into their own bodies. When the bacteria die, their cellular materials (particularly proteins and lipids) adsorb onto iron-oxide mineral surfaces.

An incubation period longer than three weeks is needed to understand what happens to these nitrogen-rich organic coverings over long timescales. Questions exist as to whether the cellular materials remain tightly bound to the iron oxide for months or years, making them chemically unavailable to microbes, or whether they can easily re-enter the nitrogen cycle. Answers to these questions have implications for understanding the available sources of nitrogen in ecosystems and how organic matter becomes stabilized in soil. Pett-Ridge says, “If this mechanism causes nitrogen-rich organic matter to be tightly held in the soil, then the system has a means of holding onto its organic matter in a way we didn’t understand before.” 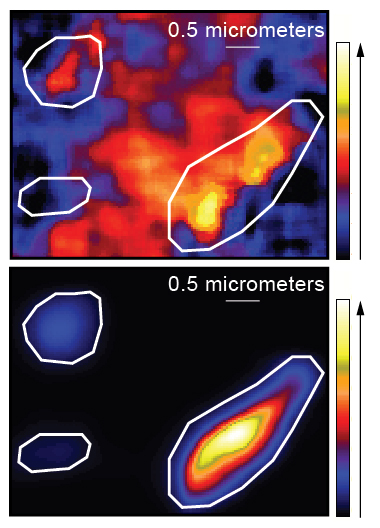 The decomposition of forest-floor litter is a critical process that regulates the release of nutrients needed for plant growth and is the first step in SOM formation. Observations in a variety of forest ecosystems show that manganese content in this material is an important predictor of its decomposition rate, but the reason for this correlation is unknown.

To investigate why manganese is such a good predictor of decomposition, Pett-Ridge’s team used chemical imaging to analyze samples collected from the H.J. Andrews Experimental Forest during a seven-year-long project. At the end of each year, a fine-mesh screen was placed on top of the leaf debris. The result was a six-layer “litter cake” where the bottom layers were far more decomposed than those nearer the top. Analysis of samples from multiple points along the decomposition sequence revealed that in the more highly decomposed samples, the microorganisms living in the litter recruited more external manganese.

“We’ve known that decomposition rate and manganese concentration are positively correlated, but until our analyses, we didn’t know why,” says Pett-Ridge. “By imaging the activity of the microorganisms at the micrometer scale, our research showed manganese activates enzymes in the fungi that decompose carbon-rich lignin. This substance forms the rigid cell walls found in plant tissues and takes a long time to decay. Manganese makes the enzymes work, enabling the fungi to do their job breaking down the lignin.” The next step, she says, “is to better understand what mechanisms regulate the proportion of stored carbon versus carbon released to the atmosphere.” 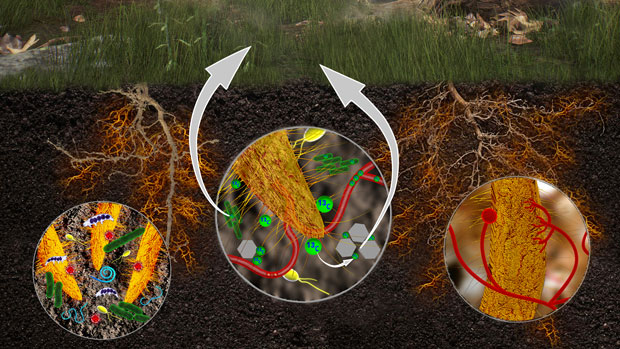 (left) Soil decomposition processes are shaped by interactions between plant roots, microorganisms, and soil minerals. (middle) Carbon (13C) fixed during plant photosynthesis is released during the breakdown of leaves and roots, then consumed by bacteria and fungi, with a portion becoming bound to soil minerals. (right) Fungi (red threads) are shown in association with a plant root. With stable isotope tracers and high-resolution imaging, Livermore researchers can quantify and track decomposition processes. (Rendering by Adam Connell.)

Living plant roots provide the primary input to soil carbon, releasing organic compounds, called root exudates, into the rhizosphere—the region of soil immediately nearby. Within the rhizosphere, roots create their own microbiome by exerting control over both the surrounding chemistry and microorganisms. Scientists have long thought that root exudates provide easy energy for soil microbes, allowing them to break down SOM. Recent research suggests that increased atmospheric CO2 created through the SOM-decomposition processes stimulates plant growth, which leads to greater exudate production and a net loss of soil carbon. Scientists need a better understanding of how root exudates affect the balance of soil carbon to create more accurate climate models.

Using NanoSIMS and STXM, the team studied the mechanisms of rhizosphere carbon loss resulting from three exudate compounds: oxalic acid, glucose, and acetic acid. The study revealed, for the first time, that exudates can act directly on “old” carbon bound to soil minerals, breaking these bonds and exposing previously protected carbon to microbial decomposition. This previously unknown mechanism suggests a new way that roots and their microbiome could accelerate the release rate of atmospheric CO2.

Collectively, the work being done by Pett-Ridge and her colleagues informs a new OBER biofuels research project and several other projects on plant–microbial interactions in the rhizosphere. These efforts seek to define and understand the biological mechanisms underlying soil carbon sequestration that are critical for predicting climate change. “What we know about the future effects of climate change comes from computer models,” says Pett-Ridge. “A better mechanistic understanding leads to greater predictive power and more accurate climate models. Studying soil mechanisms at the microscale helps us connect the dots.”