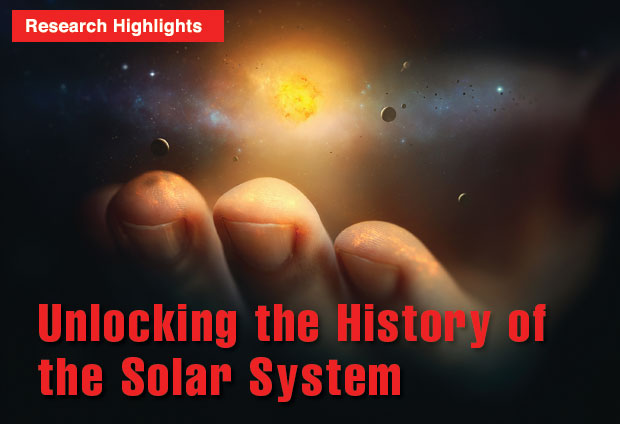 Unlocking the History of the Solar System

The nuclear detectives at Livermore were suspicious. Samples cannot lie, but the stories told by these particular materials raised too many questions. One sample after another from crustal rocks and mantle reservoirs gathered during the Apollo lunar missions clocked in at a narrow range of ages, between 4.30 and 4.38 billion years old. This surprising result was found no matter where the astronauts collected samples and no matter what isotope ratios the Livermore sleuths measured—rubidium-87/strontium-87, samarium-147/neodymium-143 (147Sm/143Nd), samarium-146/neodymium-142 (146Sm/142Nd), lutetium-176/hafnium-176, or lead-207/lead-206.

The theorists said those results could not be right. Some of the rocks had to be much older, because the Moon could not be that young. Moreover, the Moon was thought to have formed over a far longer period. Perhaps the astronauts failed to collect samples in locations where the oldest rocks lay. Or perhaps the theories are wrong. Livermore’s 20 years of work measuring the ages of these lunar samples, summarized in a 2014 paper, points the finger at the latter possibility. Lars Borg, a chemist in Livermore’s Nuclear and Chemical Sciences Division, says, “It’s difficult to see how all of the different events recorded by the Moon rocks could have essentially the same age unless they all reflect the formation age of the Moon.”

Planetary geologists are now trying to reconcile Livermore’s findings with a revised theory, first formulated in the 1970s, of how Earth’s Moon developed. According to this origin story, the Earth arose when dust orbiting the Sun began to accrete into solid clumps, then into larger bodies called planetesimals, and finally into Earth itself. Later, some other large body approximately the size of Mars collided with the Earth. Superheated rock and dust scattered, and then re-accreted, forming the Moon in Earth’s orbit. Accretion of the Moon is thought to have produced enough heat to completely melt it. Computer modeling suggested that cooling of this ocean of magma was fairly rapid—lasting only a few million years—and resulted in a sequence of rocks in the lunar crust and mantle of approximately the same age. These rocks include the white crustal rocks that can be seen from Earth, as well as areas where dark basaltic rocks form the flat, smoother surfaces of the Moon called “mares,” or seas, by Galileo.

The Apollo 16 lunar lander took this composite photo on the Moon. A sample studied by Lars Borg and the cosmochemistry team at Livermore was retrieved at the location indicated. (Photographs courtesy of NASA.)

If the above theory is correct, then all rocks thought to represent the first solidification products of the lunar magma ocean should yield roughly the same age. The problem is that ages measured since the 1970s span a range of 4.22 billion to 4.56 billion years ago, suggesting that either the model or the ages are incorrect. Most scientists argue that all but the oldest ages are incorrect. However, the detailed chronologic investigations performed by the Livermore team using newly developed techniques to precisely date individual samples with confidence indicated that all the samples solidified within a narrow window of time. If these rocks represent the solidification products of a primordial magma ocean, then they record the age of the Moon. The scientific debate continues, but Livermore’s contribution to the evidence has significantly stirred the pot.

The radioactive decay of isotopes of certain elements provides scientists with a powerful tool—the ability to measure the age of a material anywhere from seconds to billions of years old. By measuring the abundances of parent and daughter isotopes in rocks and minerals with extremely accurate mass spectrometers, Livermore scientists can measure the age of planetary materials with a margin of error of less than 1 percent. Thus, the ratio of a gradually decaying radioactive parent isotope such as 147Sm to its daughter isotope 143Nd can be used to uniquely pinpoint the time billions of years ago that a rock solidified. At Livermore, these tools serve a dual role, supporting both cosmochemical research and nuclear forensic capabilities. Nuclear forensics is central to the Laboratory’s security missions, and cosmochemical work is key to developing techniques to measure isotopes that can be used to provide clues to the origin of illicit nuclear materials that might be diverted for use in weapons of mass destruction. In fact, many of the same systems used for cosmochemical research also apply to constraining the origins of nuclear forensics samples.

A Livermore cosmochemistry team led by Borg measured the ages of lunar crustal rocks using isotope ratios in samples collected by several Apollo missions. Instead of observing the long range of ages reported in the literature (red and blue symbols) indicating a lengthy lunar evolution, they found all the samples fell within a narrow band (white vertical lines) of between 4.30 billion and 4.38 billion years old (black symbols).

Borg explains, “In the 1980s, the Laboratory hired academically trained cosmochemists with expertise in mass spectrometry to contribute to the nuclear test program. They found that neutron reactions taking place in these tests were also relevant to cosmochemistry.” As the Laboratory developed its nuclear forensics capability, a world-class cosmochemistry capability also came about. This cosmochemistry group began to unravel the history of the solar system, the ages when the planets formed, and the relationship of meteorites to the solar system’s primordial matter. Thanks to decades of funding from NASA and Livermore’s Laboratory Directed Research and Development Program, Livermore has become one of the world’s foremost centers of research on the origin and evolution of the solar system, including Earth. Livermore researchers have studied samples relating to the age of the Moon and the timing of lunar impact basins, the age of volcanic activity on Mars, the evolution of the Martian atmosphere, the timing of Martian crust and mantle formation, and the sources of materials that contributed to the dust and gas that later condensed forming the Sun, planets, asteroids, and comets of our solar system.

The Livermore cosmochemists excel at throwing doubt on long-established hypotheses. A common assumption among planetary geologists, for example, is that the composition of the Earth is equivalent on average to a common variety of stony meteorite called chondrites. Thousands of these meteorites have been found on Earth, and scientists assume their compositions reflect that of the solar system’s primordial rocky matter from which Earth and the other planets formed. Then, beginning in about 2008, investigators elsewhere found that the neodymium-142/neodymium-144 ratio in crustal Earth rocks was higher than in chondrites by about 20 parts per million.

Theorists began suggesting that the early Earth was formed from a different reservoir of material than chondrites, or that Earth was enriched in material with a higher Sm/Nd ratio than chondrites, or that a hidden reservoir of material existed within the Earth. All of these theories, although equally plausible, lacked any supporting evidence. In early 2017, a group of Livermore researchers including Borg developed techniques to measure several other stable Nd isotope ratios in various chondrites. The team found that the stable isotopes of Nd were different in chondrites than in Earth, suggesting that terrestrial Nd derived from a slightly different proportion of nucleosynthetic sources than the Nd in chondrites.

Heavy elements form through nucleosynthetic processes in the cores of giant stars and when stars explode in a supernova, ejecting the building blocks of new stars and planets. Each type of condition produces material with an identifiable isotopic signature. (See S&TR, July/August 2014, Evidence of a Turbulent Beginning.) Livermore’s research suggested the Earth formed from material that was slightly richer in components from giant stars than in supernova material. Thus, the protoplanetary molecular cloud from which the solar system formed need not have been perfectly uniform in composition—material closer to the Sun could have had more giant star–derived Nd, whereas chondritic meteorites forming farther from the Sun would contain a higher proportion of material from supernovae. No special events were needed to alter Earth’s mix. Instead, the protoplanetary molecular cloud simply had to remain heterogeneous during condensation of the first solids. Livermore’s findings are again forcing a rethinking of current notions. Borg summarizes, “We are trying to provide the physical constraints by which the average composition of bulk chondrites represents the composition of individual planets.” 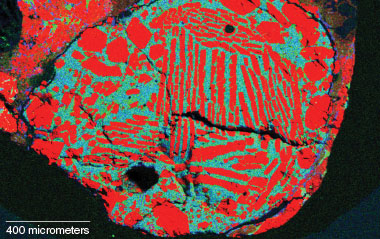 The chondrule shown, found in a chondrite meteorite, was analyzed by Livermore cosmochemists. These particles are thought to be the first silicates to form in the solar system, possessing isotopic compositions characteristic of the earliest solar nebula. (Red, green, and blue indicate magnesium, aluminum, and calcium, respectively.)

Many Talents under One Roof

Livermore draws on the talents of many world-class cosmochemists—both on the staff and as visiting scientists—as well as exceptional technological capabilities. Borg states, “What makes us unique in the field is that we have the most relevant technologies in one building, as well as the people working in these laboratories under one roof who can solve various aspects of many problems. Teamwork gives us an advantage.” Livermore’s capabilities include several forms of mass spectrometry—inductively coupled plasma, thermal ionization mass spectrometry, and resonance ionization mass spectrometry (see S&TR, January/February 2017, pp. LION Hunts for Nuclear Forensics Clues). The Laboratory also used its Instrument Development Program funds to acquire a nanometer-scale secondary ion mass spectrometry (nanoSIMS) device, one of less than two dozen such devices in the world today. NanoSIMS enables Livermore researchers to measure isotope concentrations in submicrometer-sized parts deep inside a sample. A next-generation inductively coupled mass spectrometer is also due in September 2017.

These false-color microphotographs show examples of calcium aluminum–rich inclusions that Livermore’s cosmochemistry team measured for traces of tellurium. The team searched for a radioactive tin isotope that might support the hypothesis that the solar system formed when a supernova caused the collapse of the protoplanetary molecular cloud. (Red, green, and blue represent magnesium, calcium, and aluminum, respectively.) 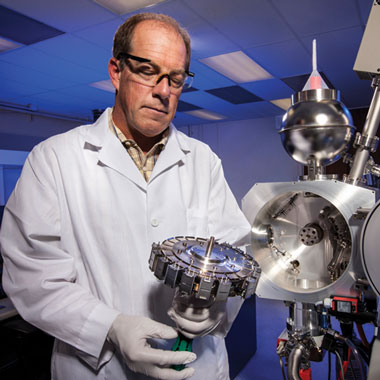 Borg is shown holding the sample wheel of a thermal ionization mass spectrometry system, which the cosmochemistry team uses to measure isotope ratios.

Since coming to the Laboratory after time at NASA and the University of New Mexico, Borg has guided research addressing questions that reach ever farther out into space, even to the search for the perturbations that triggered the solar system’s beginning. Borg, Gregory Brennecka—a former Livermore postdoc now at the University of Münster in Germany—and others recently developed a method for measuring tellurium-126 (126Te) in calcium aluminum–rich inclusions (CAIs), particles thought to be the first solids to form in the solar system. Because 126Te is a decay product of tin-126 (126Sn), which forms only in supernovae, its presence in CAIs would support a decades-old hypothesis that a nearby supernova triggered the gravitational collapse of the molecular cloud that formed the solar system. In 2017, Brennecka, Borg, and colleagues reported a new method for detecting 126Te at parts-per-million concentrations, or 30 times more sensitive than prior techniques. Finding no evidence for 126Sn in the samples they studied, Borg and his team again cast doubt on long-established hypotheses. In addition, the scientific community now had a new way to continue the search.

Borg sums up why this research excites him: “What is really cool about this work is that we’re looking at many different aspects of planetary formation, and it is painting a broad picture of how everything works. We’re slowly answering the question, How did the solar system evolve?”