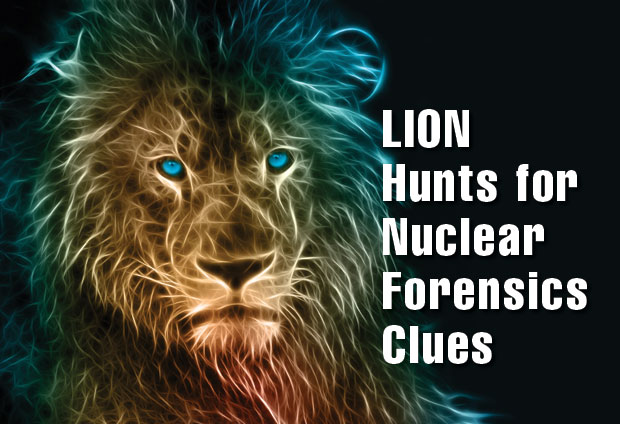 In the event illicit nuclear material is intercepted by authorities, Lawrence Livermore scientists are prepared to help officials find the culprit. Using nuclear forensics, a science that Livermore played a prominent role in creating, the Laboratory’s experts will analyze the material to enable authorities in determining its source, the pathway it took from its source to the perpetrator, and its intended use.

The new laser ionization of neutrals (LION) laboratory at Livermore can quickly analyze nuclear material and provide critical information to help investigators determine the material’s possible origin and intended use. It uses a technology called resonance ionization mass spectrometry (RIMS) to measure isotope ratios of elements such as uranium and plutonium. Within hours, RIMS can provide authorities with a read of whether a material was manufactured for use in a nuclear reactor or a weapon, or repurposed for weapons from reactor fuel—details that can provide the first clues to its origin.

Nuclear forensics scientists use various techniques and technologies to trace nuclear materials, and RIMS has a particular role to play within their bag of tricks. RIMS can identify the specific isotope a scientist wants to quantify using lasers tuned to unique resonant frequencies that ionize only the atoms of that particular element. Measurements can be obtained using just a small sample, and little sample preparation is needed so the results arrive quickly. The RIMS technique also does an excellent job of distinguishing between isotopes of different elements that have the same atomic weight, such as uranium-238 (238U) and plutonium-238 (238Pu). This feature is particularly important for identifying stages in the nuclear-fuel processing cycle. In fact, preliminary analysis by RIMS could well become one of the initial steps in the material characterization process. The technique has also shown the ability to measure uranium and plutonium isotopes in fallout debris from nuclear tests.

“About half a dozen facilities for RIMS analysis exist in the world,” says Brett Isselhardt, a Livermore nuclear engineer. “LION is the only one we know of that is focusing on nuclear forensics.” Isselhardt, colleague Michael Savina, and their team have built the RIMS instrument from their own custom design. They are now testing the equipment’s ability to accurately measure relevant isotope ratios and determine with sufficient confidence the instrument’s usefulness for forensics applications. 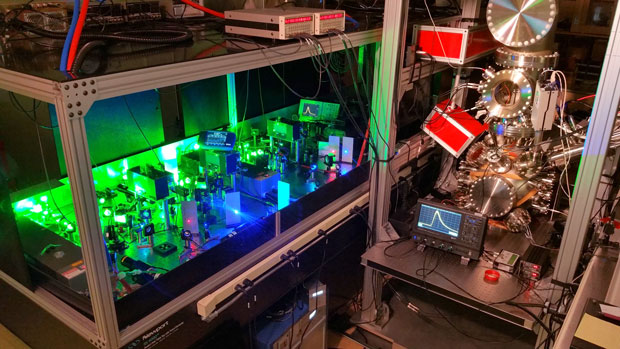 The RIMS technique uses a laser beam to shake loose atoms and molecules from a solid sample, forming a rapidly expanding cloud. A voltage pulse removes the ions in the cloud, leaving the neutral atoms behind. Subsequently, lasers tuned to a particular element hit the cloud with two or three pulses that selectively excite then ionize resonant electrons in the atoms of the target element. Using an electric field, the now-charged ions are accelerated into a time-of-flight mass spectrometer, which identifies and measures the quantity of the various isotopes of that element. (See S&TR, April/May 2012, An Improved Tool for Nuclear Forensics.)

The late Livermore scientist Ian Hutcheon, who was instrumental in advancing the science of nuclear forensics and founded the Laboratory’s forensics team, saw RIMS’ potential when it proved quick and accurate at measuring isotopes in dust particles relevant to cosmochemistry. He approached Savina—an expert on laser-based spectroscopic methods—to begin assessing RIMS’ application in forensics. Savina, then at Argonne National Laboratory, was applying RIMS to study actinides, the elements of the periodic table that include uranium and plutonium, in cosmic dust. He says, “Ian’s interest in RIMS really piqued once he saw our plutonium measurements from the dust samples because the instrument was so much more capable than other methods.”

Over the years, Livermore has received growing funding for this work from the Laboratory Directed Research and Development Program, the Department of Homeland Security’s National Technical Nuclear Forensics Center, the Defense Threat Reduction Agency, and the Department of Energy’s Office of Nonproliferation Research and Development. During that time, Isselhardt, who began studying RIMS as part of his Ph.D. dissertation in 2006, Savina, and colleagues at Livermore and Argonne led an in-depth study of RIMS for nuclear forensics applications. “It was slow going at first. The instrument at Argonne was often fully booked,” says Isselhardt. But the team’s perseverance paid off, and in 2011, Isselhardt, Savina, and colleagues published their research, which suggested that RIMS could measure uranium isotope ratios with the necessary precision. Four years later, they demonstrated precise RIMS measurements of the ratio of 240Pu to 239Pu, another measurement essential to nuclear forensics. They also showed that RIMS could measure 238Pu accurately even when the sample had significant amounts of 238U. This isobaric interference (caused by an isotope of a different element with the same atomic weight as the target isotope) has confounded many other mass spectrometry techniques.

RIMS measurements are now capable of quantifying uranium isotope ratios with accuracy as high as 0.5 percent. Minimizing error is important because “the isotope ratios in nuclear materials tell you about its irradiation history, what sort of environment it was in, and what the purpose of the material was—whether it was for weapons or for nuclear reactors,” says Isselhardt. Ultimately, inaccurate measurements can lead to incorrect conclusions about the material’s origin. 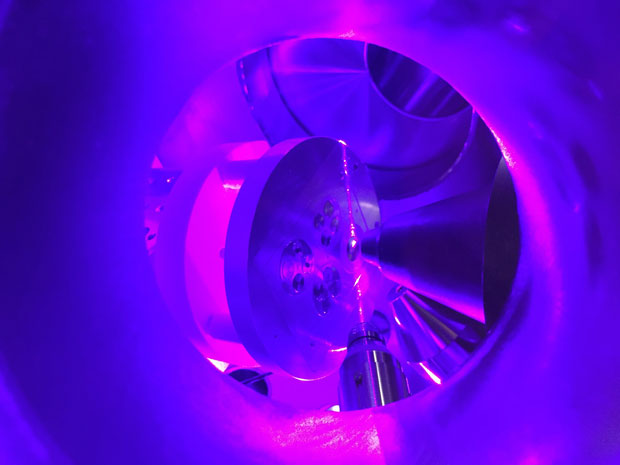 A laser beam (produced from three individual lasers) ionizes a sample of uranium (center) within the RIMS instrument. The lasers are tuned to the precise resonant frequencies of a particular element, or pair of elements simultaneously, such as uranium and plutonium. The isotopic compositions of various elements provide indicators of whether the nuclear material was enriched as nuclear reactor or weapons-grade material. Trace impurities can help pin the sample to a particular enrichment process. 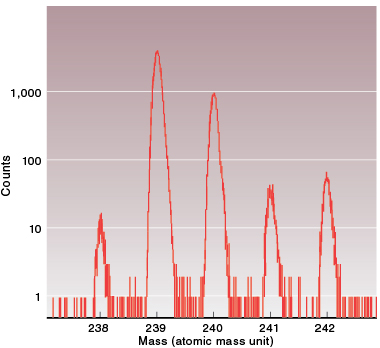 A measurement of plutonium using the RIMS instrument at Livermore’s LION laboratory demonstrates the instrument’s ability to accurately measure five plutonium isotopes (238, 239, 240, 241, and 242) despite the presence of a 10-times higher concentration of uranium-238 in the sample. The logarithmic scale on the y-axis shows the number of ions detected for each isotope.

The Emergence of LION

In 2015, when Savina joined Livermore, he and Isselhardt, in collaboration with mechanical technician Dave Ruddle, postdoctoral researcher Andrew Kucher, programmer Raja Gopal, and visiting scientist Bruce King from the University of Newcastle in Australia, finished building the Laboratory’s LION facility. Within a few months, the team produced its first result, and the researchers are continuing to put LION through its paces. “The facility is operational and functional. We are improving the instrument’s automation and integration,” says Isselhardt. Their current task is to ensure its accuracy by reproducing and improving on the results they achieved for uranium and plutonium while using the Argonne instrument. “Our goal is to make these measurements rapid, robust, and routine,” says Savina. “We want to be able to deliver meaningful measurements within four hours of receiving a sample.”

The team is also beginning to take measurements of other isotope ratios. “Having made accurate uranium and plutonium measurements, we’re moving toward studying isotope ratios of americium, curium, neptunium, and trace fission products, especially those from the nuclear fuel cycle because they can give additional information about the age and enrichment history of nuclear materials,” says Isselhardt.

Although LION’s focus will be nuclear forensics, the researchers expect to put their facility to use in basic science studies as well. Cosmic dust carries evidence of how some stars evolve into supernovae. Savina is planning to take measurements of plutonium in lunar dust from the Apollo mission in search of particles that may have been produced in supernovae explosions and later drifted onto the lunar surface. With the LION facility fully operational, Livermore provides the nation with an important capability for cosmochemistry, and most importantly, for nuclear forensics as LION hunts for clues to the origins of nuclear materials.