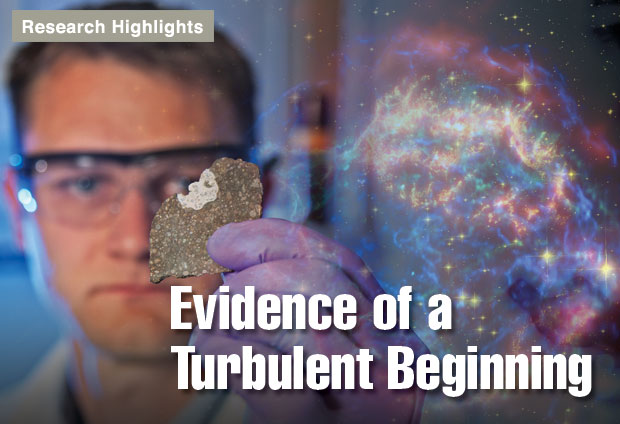 Calcium aluminum–rich inclusions (CAIs), such as the one shown here (white) embedded in an Allende meteorite sample, were the first solids to form in our solar system. By measuring the isotopic compositions of multiple elements in individual CAI samples, Livermore researchers Greg Brennecka (shown) and Lars Borg have discovered systematic differences between CAIs and terrestrial materials. The data indicate that a nearby supernova (similar to the one shown top right) injected material into the solar system sometime between the formation of the first solids and the formation of the planets. (Photo by George A. Kitrinos; Cassiopeia A supernova image courtesy of NASA’s Chandra X-Ray Observatory.)

The universe provides a seemingly endless source of mysteries to investigate, from studying what happened shortly after the big bang to determining whether life exists on other planets. Understanding our solar system’s formation and evolution is one of the foremost areas of research among planetary scientists, including astrophysicists and geochemists, who seek to answer how, when, and why the solar system began. Of particular interest is deciphering the conditions of the system’s nascent environment, an actively debated topic in scientific circles. New research from a Livermore-led team suggests our solar system’s birth was chaotic and included input from a nearby supernova explosion early in its evolution.

Researchers Lars Borg and Greg Brennecka, along with colleague Meenakshi Wadhwa at Arizona State University, used Livermore-developed techniques to evaluate isotopic signatures in calcium aluminum–rich inclusions (CAIs) from the Allende meteorite, which fell to Earth in northern Mexico in 1969. These submillimeter- to centimeter-sized inclusions within the meteorite matrix were the first solids to form in our solar system, predating the terrestrial planets (Mercury, Venus, Earth, and Mars) by more than 1 million years. Thus, the isotopic character of CAIs provides details about the composition of the system at its earliest stages and the astrophysical events that may have contributed later to the elemental makeup of planets. Previous studies of these materials focused on the isotopic compositions of single elements and how they differ from terrestrial samples. Borg and Brennecka have taken a fundamentally different tack, examining the compositions of multiple elements in the same sample set.

Their approach provides clear evidence that the cloud of matter condensing to form the Sun and planets was showered with material produced by a nearby type II supernova explosion. “The data indicate elements with isotopic composition typical of supernova material must have been injected into the solar system sometime between the formation of the first solids and the formation of the planets,” says Brennecka. The work, a spin-off of Brennecka’s doctoral research studying uranium isotope compositions in CAIs, provides important new details on the formation of the solar system and answers some of cosmochemistry’s long-standing questions about the isotopic abundances observed on Earth.

A Glimpse into the Past

An isotope has the same atomic number as its “parent” element but a different mass number based on how many neutrons are contained in its nucleus. In stellar environments, nucleosynthetic processes, such as proton- and neutron-capture reactions, and radioactive decay contribute to the creation of heavy elements and their isotopes throughout the universe. Elements heavier than nickel are produced by p-process (proton capture), s-process (slow neutron capture), or r-process (rapid neutron capture) reactions. Brennecka says, “The combination of these reactions is ultimately responsible for the isotope abundances present in all solar system materials.”

CAIs are thought to have formed in the innermost part of the solar system’s protoplanetary disk. They are isotopically anomalous to materials that formed later in the system’s development, but the reasons for this characteristic are not well understood. To study the discrepancy, Borg and Brennecka dissolved whole CAIs from the Allende meteorite in acid and isolated individual elements by passing the samples through multiple ion chromatography columns to separate targeted elements from the sample matrix. Borg says, “We studied elements such as strontium, molybdenum, barium, neodymium, and samarium. These elements have multiple stable isotopes, and each one has variable inputs from p-, s-, and r-process nucleosynthesis.” Using mass spectrometry instrumentation at Livermore and Arizona State University, the team determined that the isotopic compositions of these elements differed slightly from the isotopic compositions of the terrestrial planets.

“By examining multiple heavy elements in the same sample set, we uncovered a systematic difference in their isotopic abundances,” says Brennecka. “These isotopic ‘fingerprints’ indicate that CAIs originated in a homogeneous reservoir different from that of solar system materials that later formed the planets.” The systematic difference suggests that after the formation of CAIs, the early solar system must have been injected with a small amount of material containing heavy elements created by r-process nucleosynthesis. This process occurs when the nuclei of lighter elements capture large numbers of neutrons, then beta decay to stability, increasing the atomic number of the nucleus. The most likely astrophysical process producing the conditions needed for initiating and sustaining r-process nucleosynthesis is a core-collapse (or type II) supernova.

R-process nucleosynthesis produces heavy elements from lighter seed nuclei. In this process, rapid neutron captures (left) produce heavier isotopes of the seed element, until an unstable isotope with a beta-decay lifetime shorter than the neutron capture rate is formed (center). Beta decay of a neutron, which produces a new proton and an emitted electron, transforms the unstable neutron-heavy seed element isotope into a very heavy isotope of the new element (right). Eventually, when the neutron flux declines, these very heavy species will decay back to stability, producing the most neutron-rich stable isotope of the newly created element.

Type II supernovae are the end product of short-lived, massive stars that quickly exhaust their available fuel, gravitationally collapse, and violently expel material to interstellar space. These events are categorized by the isotopic masses they produce, with certain mass ranges occurring at a higher frequency than others. As a result, materials created in close proximity to these events have distinct isotopic signatures. “Surprisingly, what we found in our analyses were excesses in r-process isotopes below mass 140 and deficits of those isotopes above mass 140,” says Borg. “These data provide physical evidence for the multiple, differing sources of r-process nuclides.”

“The basic idea is that something relatively depleted in r-process isotopes below mass 140 and relatively enriched in r-process isotopes above mass 140 would be required to make up the differences between the CAI reservoir and the terrestrial planet reservoir,” says Brennecka. “These systematic differences between the first solids and everything that formed later give us a window for when the supernova would have injected material into the protoplanetary disk. They also tell us that the neighborhood our solar system ‘grew up’ in was rough. Possibly, many violent events were happening as our solar system was forming.” 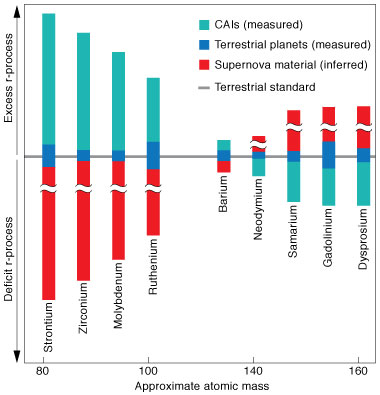 The work performed by Borg, Brennecka, and Wadhwa is important for several reasons, not the least of which is that it is really interesting science. “Through our analyses, we know what the isotopic fingerprint looks like for this supernova,” says Brennecka. Borg adds that the system the researchers developed for studying multiple isotopes in a single sample is particularly noteworthy. “It’s not a trivial task to isolate each of the elements from an individual sample,” he says. Furthermore, no other laboratory has studied more than a few elements in the same CAI sample set. To date, the Livermore team has examined more than 10 elements in the same sample set, spanning almost the entire mass range of the periodic table. This work has additional applications for other Department of Energy research areas, from understanding thermal neutron capture to isotope fingerprinting of nuclear materials, both of which are important to the Laboratory’s national security missions.

Many questions remain regarding our solar system’s inception and evolution. However, Borg and Brennecka offer a new method by which to probe for answers to these unknown questions. The next big challenge for the team is to study other CAIs to assess whether these materials also demonstrate evidence for multiple sources of r-process nuclides or whether the anomalies are unique to the Allende meteorite. “We have raised the bar for the geochemistry and cosmochemistry fields going forward,” says Borg. “We are proving that single-element analysis gives us only part of the picture. By analyzing multiple elements in the same sample set, we are gaining a better understanding of what was happening during our solar system’s formation.”