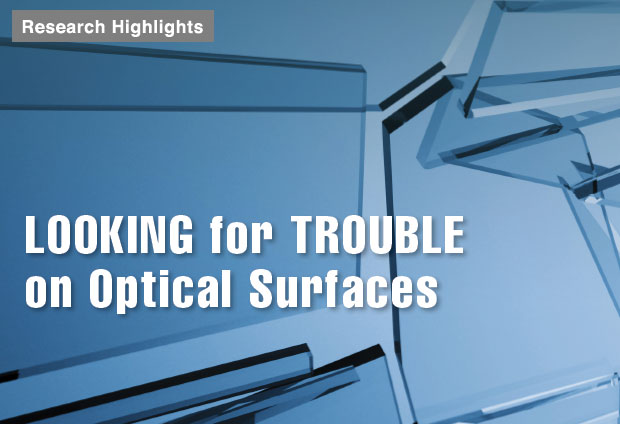 Looking for Trouble on Optical Surfaces

High-energy pulsed lasers, including the world’s most energetic laser at Lawrence Livermore’s National Ignition Facility (NIF), rely on finely calibrated optics for accuracy. The lenses, mirrors, and crystals that make up a laser’s optical system serve various functions, from guiding a beam toward a reflective surface to correcting distortions. NIF’s 192-beam system includes tens of thousands of optics that amplify and focus energy for hundreds of shots every year. In the high-energy-density regimes of these experiments, optical integrity is paramount.

Recently, a team of OMST scientists, with input from collaborators at Lawrence Berkeley National Laboratory and the University of Rochester’s Laboratory for Laser Energetics, completed a project funded by the Laboratory Directed Research and Development (LDRD) Program to examine in detail coupling mechanisms between lasers and contaminants on optical surfaces. Livermore physicist Manyalibo (Ibo) Matthews led the project, which aimed to understand how contaminant particles interact with laser beams, how particle shape and particle-induced damage affect beam propagation, and how damage morphology evolves in the presence of high-energy lasers. 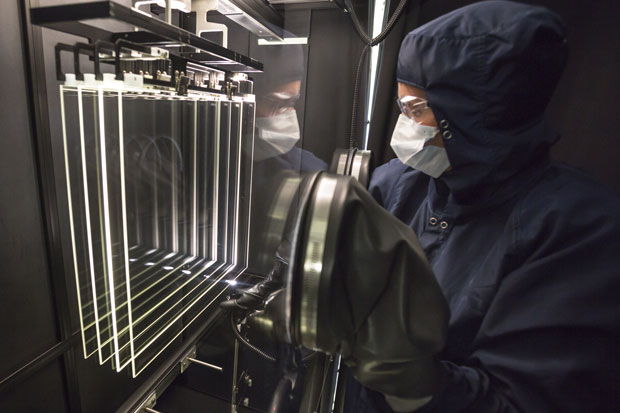 At the National Ignition Facility, a low-cost disposable debris shield (several are shown here) protects the final optics from debris and contamination. However, the disposable shield is susceptible to damage, which, in turn, can cause glass shards and particulates to be introduced into the optical field.

Like many sensitive instruments, optical components are susceptible to dirt, debris, and defects at all phases of their production and operation, including fabrication, processing, handling, and installation. In addition, airborne particles generated during laser operation or present in a laboratory environment can relocate to other areas, potentially contaminating optical surfaces.

Optics closer to the laser’s target encounter additional threats. At NIF, a disposable debris shield positioned between the final optics and the target can begin to break down with use, potentially introducing glass shards and particulates into the optical field. In addition, during an ignition shot, the target (a gold hohlraum containing a deuterium–tritium fuel capsule) is compressed as its holder is blown apart, generating fragments that can threaten the nearest optics.

Besides sustaining damage from surrounding materials, optics are directly affected by the high-energy laser beams. Repeated exposure over time contributes to accumulated defects. Furthermore, debris on the input side of an optical component can diffract incoming laser light, altering the beam path and promoting damage initiation on the exit side of the optic. Ironically, just as an attempt to clean eyeglasses might smear a substance across or grind particles into the lenses, dry laser cleaning—using a low-energy laser pulse to clear off debris—can also damage optics by creating shallow pits. 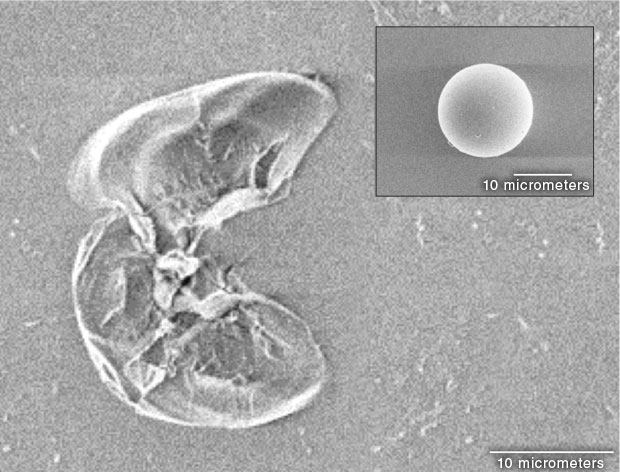 Laser-induced pitting scatters the light from the laser and causes the optical surface to become hazy, but the team was not sure how problematic such effects were to overall laser performance. “We learned that metal contamination could cause shallow pits on the glass surface,” explains physicist Eyal Feigenbaum, comparing the typical pit to the shape of a margarita glass. Feigenbaum created simulations of pit formation and morphology and developed models to characterize the resulting beam degradation. Further tests with large-aperture beams, in which large numbers of particles were evaluated simultaneously, enabled Feigenbaum to assess debris-caused damage characteristics. 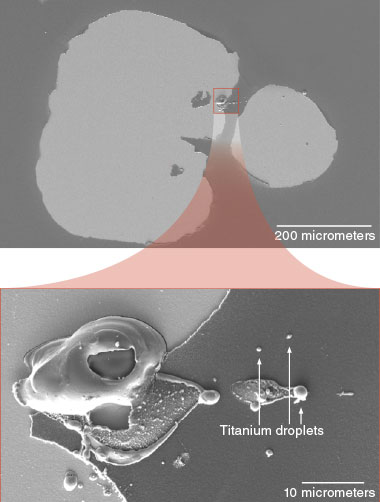 A Range of Results

Matthews and colleagues found that the mechanisms governing laser–particle interactions depend on multiple factors. Regarding particle shape, the team saw a range of dispersal patterns following a laser pulse. In some cases, the momentum of a beam hitting a spherical particle yielded a donut-shaped distribution of fragments. Irregularly shaped particles, such as those formed by mechanical abrasion, produced a shielding effect via dispersion fields that mimicked particle shape. In the MLD experiments, Qiu observed a relationship with the coatings’ properties. He notes, “Contaminant-driven damage of MLD coatings is strongly dependent on the shape of particulates and the thermal expansion and mechanical strength of the coating materials.”

A particle’s opacity also affects its behavior, as does the location of debris relative to the incoming beam. On an optical component’s input surface, opaque particles tend to compress and disperse along the surface as the beam is obscured, whereas transparent particles tend to blow away from the substrate because more light energy is deposited into their interior. On the exit surface, the opposite occurs. Essentially, opaque particles are ejected while transparent particles break into shards and, under certain circumstances, fuse to the substrate, promoting damage initiation. Thus, opaque debris causes more damage on the input side, and transparent debris causes more damage on the exit side. These behaviors were key findings of the LDRD study.

The team’s experiments and simulations also revealed interesting features of particle ejection and dispersion. Some particles move from one location on the optical surface to another without ejecting. Others disperse quickly or slowly depending on the intensity of beam fluence, and still other particles liquefy and spray out from the surface. Calculating particle velocity and trajectory helps estimate the strength of ejection mechanisms, including secondary effects such as shockwaves reverberating inside and breaking apart particles. “Ejected material has to go somewhere,” observes Matthews. “These findings can inform upgrades to laser-ablation processes with a goal of removing ejecta from optical surfaces.”

As energy transfers from the laser beam to the particle—a mechanism known as pulsed-laser momentum coupling—plasma forms between the surface and the particle. Matthews’ team studied the shockwave generated by the laser and the resulting plasma plume. They found that different types of particles vary in their reaction to the shockwave, and plasma flow changes as the particle moves. By measuring the speed and temperature of plume formation, the team showed that plasma is sensitive to laser fluence, wavelength variations, and beam angle.

As for pits carved by metallic particles, Feigenbaum observed surprising behavior. “These shallow pits do not tend to grow with subsequent laser shots, so their effect is limited.” But when the laser fires at higher energies, he warns, “Another mechanism kicks in, and deeper surface fractures are created. These fractures do grow with subsequent laser shots and limit an optic’s lifetime.” This relationship between beam intensity and pit and fracture formation allows scientists to evaluate beam-scattering effects on the system’s performance. “The scattering model for the hazed-glass surface has been instrumental to operations and usability of NIF laser optics,” says Feigenbaum. 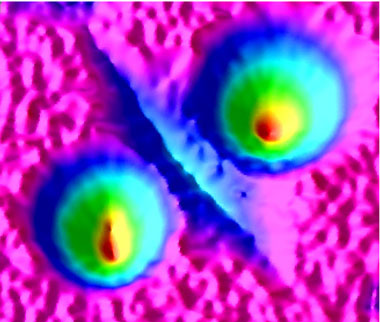 A false color, three-dimensional rendering shows two laser-induced shallow pits (LSPs) on a silicon-dioxide optical surface. A cluster of LSPs also creates the linear-like groove in the center. Typical dimensions for LSPs are up to a few tens of micrometers in width and hundreds of nanometers in depth.

In keeping with the spirit of the LDRD Program, the team’s experiments serve a larger purpose of innovation in optical design and laser performance. Understanding laser–matter interactions can inspire design improvements, such as vapor chemistry treatments, to make optics and coatings more impervious to damage or repellant to debris. Scientists can use these data to develop debris-removal techniques without compromising optical integrity and to enhance the Laboratory’s computational capabilities to better predict contamination scenarios and prevent overuse. Cost savings naturally follow life-extension efforts.

Livermore’s Directed Energy Program is poised to reap the benefits of this LDRD project in developing new types of laser technology, such as continuous wave and diode-pumped alkali lasers. Matthews also cites industrial settings in which optical surfaces play an important role, such as in lasers used to generate patterns or for machining materials with holes. He also recognizes the value of his team’s findings for the next-generation of durable optical elements. He states, “Continuing our efforts to understand and control laser damage in high-power laser systems is crucial to maintaining NIF and supporting our missions for the National Nuclear Security Administration.”