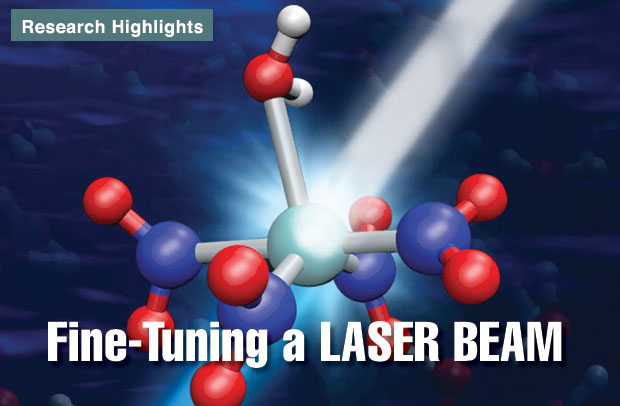 During a NIF experiment, laser light begins in the infrared, with a characteristic frequency (1,053 nanometers) that researchers refer to as 1-omega light. As it travels down the beam path, the light frequency is doubled into 2-omega (527-nanometer), visible green light and finally tripled into 3-omega (351-nanometer), ultraviolet light before engaging the target. (See S&TR, April/May 2010, A Stellar Performance). A series of specialized optics is responsible for this light transformation. Unfortunately, conversion efficiency is not perfect, leaving unconverted light mostly in the 1-omega frequency. As a result, some 1-omega light becomes mixed with the 3-omega light and can have undesirable effects on experiments as well as the laser system. For example, 1-omega light can interact with the plasma produced during laser–target interactions in ways that hinder symmetrical compression of the target. This light can also reflect back up the beam line, potentially damaging optical components.

One of the challenging goals of physicists and engineers at NIF is to develop glass for optics that can absorb as much infrared light as possible, fully transmit all the ultraviolet light, resist damage, and be feasibly manufactured. Doped glass could serve as an effective mechanism for ensuring only ultraviolet light reaches the target. While the laser-physics community generally accepts that doped glass may be useful in developing new types of optics, Livermore researchers have taken that theory one step further, demonstrating a correlation between the frequency and intensity of absorbed light and how dopants alter that absorption. 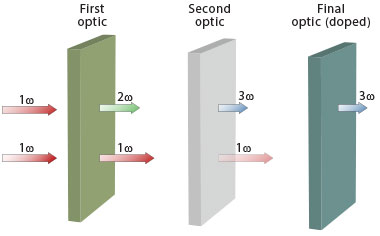 At the National Ignition Facility, a series of optics along the beam path filter and convert 1-omega (1ω), infrared and 2-omega (2ω), visible light into 3-omega (3ω), ultraviolet light. Doped glass could be used as the final optic for filtering or converting any residual 1ω light before the laser beam reaches the target.

A World of Color

In 2011, a Livermore team including Brandon Wood, Roger Qiu, Kathleen Schaffers, Paul Ehrmann, Stavros Demos, Philip Miller, Tayyab Suratwala, and Richard Brow began a series of glass-doping studies. The goal of the research—part of a three-year project funded by the Laboratory Directed Research and Development (LDRD) Program—was to understand how to make the best glass for absorbing unwanted light while efficiently transmitting 3-omega light. “Every plant that looks green, everything in the world that displays a color, is absorbing certain wavelengths of light and letting others through,” says Wood, the theory lead. “This light absorption is happening on a molecular level.”

Many of the molecules most commonly found in nature that absorb light and subsequently generate color contain transition-metal ions, such as iron and copper. Explains Wood, “When an isolated copper or iron atom is excited by low-energy photons, such as 1-omega light, it usually won’t do much of anything. For a change in energy state to occur and for an infrared photon to be absorbed, the metal needs to be complexed with another molecule that binds to it, called a ligand.” The combination of the metal and the ligand is called a coordination compound. During the study, the team looked at all the optical absorption properties of potential dopants, including the wavelengths of light that a compound absorbs, the intensity of the absorption profiles (amount of light), and the absorption breadth (frequency range).

The iron and copper ions in these compounds have an outermost shell of electrons whose energies are subtly changed by the presence of ligands, with some electrons shifting to higher energies and others to lower energies. When the molecule absorbs a photon of the right frequency, electrons can jump between the lower and higher energy states. In keeping with the law of conservation of energy, the energy difference between the electrons’ original state and their excited state is equal to the energy of the absorbed photon. The difference is also inversely related to the wavelengths of the light. Only the wavelengths matching the energy difference can be absorbed, so the compound appears as the appropriate complementary colors—the sum total of all the wavelengths that cannot be absorbed. Because iron and copper complexes can absorb infrared light, the research team considered them the top candidates for their project and set out to find the best ligands for creating the most effective coordination compound.

Bridging the Gaps in Theory

The arrangement of electrons in a ligand dictates how much and what kind of light it can absorb. An area of study called ligand field theory has explored the properties of different ligands since the 1930s. As defined by the theory, a “weaker” ligand creates a complex that has a smaller difference in energy between ground and excited states, allowing the ligand to absorb lower frequency light. “Stronger” ligands have a larger energy difference between ground and excited states and can therefore absorb light of higher frequencies. “The terms ‘strong’ and ‘weak’ are pretty amorphous,” says Wood. “The theory doesn’t tell us much about why some ligands are weak and some are strong.” Qiu, the experiment lead, agrees, saying, “Ligand field theory does not indicate correlations between the absorption intensity, breadth, and energy (or wavelength). Our experiments were designed to improve our understanding of those qualities.”

Wood ran a series of computationally intensive first-principles molecular dynamics simulations for 10 dopant ions on the Laboratory’s Cab supercomputer. These simulations probed the dopants’ behavior in aqueous solutions under varying conditions, such as different temperatures and pressures, and in different complex configurations. Meanwhile, Qiu tested these same solutions experimentally. “Solutions are much cheaper, easier, and faster to prepare than glasses,” says Qiu. “Some of the strong and weak ligands have been identified by ligand field theory and are readily available, which enabled us to carefully select the relevant ligands for our physical experiments.”

By comparing the results of the simulations and the experiments, the researchers could better determine absorption properties and pinpoint absorption mechanisms for dopants. “In our experiments, we had to be careful about making assumptions,” says Wood. “We couldn’t assume that every ion complexes with the same ligand in the same way, or that every ion complexes with the identical number of ligands. We used simulations to look at the aqueous solutions in a much more controlled way to see which of our assumptions could hold true.”

Whereas ligand field theory focuses only on the frequency of absorption, the team’s results physically demonstrate that absorption intensity and probability of absorption (also called oscillator strength) display patterns, with the strongest and weakest ligands having the best outcomes. The simulations revealed that these correlations are actually the combined result of several effects, and that they depend on the identity of the ligand as well as how the coordination compound responds to fluctuating conditions in the liquid. Wood says, “We’ve shown that conventional interpretations based on ligand field theory alone are insufficient for capturing the full characteristics of the absorption profile.” The team was also successful in identifying the most desirable copper and iron coordination compounds that may produce an effective infrared-blocking optic for NIF applications. 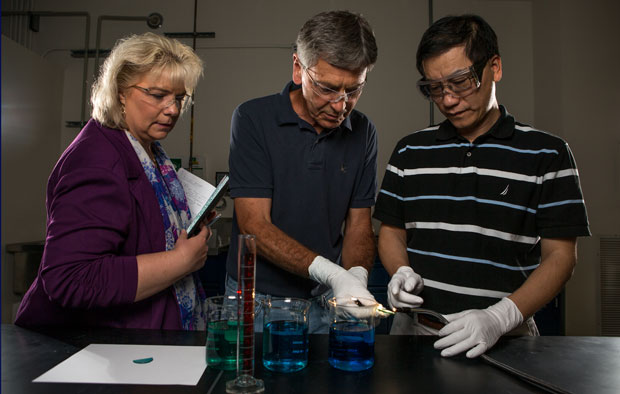 From Optics to Windows

The team’s next step is to have optics manufactured with the correct properties. The aqueous tests allowed the team to observe the coordination compounds in multiple conformations, or spatial arrangements, based on certain environmental factors, including temperature. Kathleen Schaffers, the project’s principal investigator, explains, “Glass is an interesting state of matter—it’s essentially a slow-moving liquid, something between a liquid, a solid, and a crystal. We can engineer glass to have certain properties, including the ability to hold a molecule in a specific conformation. Our ultimate goal is to develop concrete recommendations so that glass can be engineered with those properties.”

While doped glass could one day help improve light frequency conversion for experiments at NIF, it may also have applications outside the Laboratory. Qiu notes, “Our research could be applied to develop energy-efficient ‘smart’ windows for commercial and industrial use.” A large portion of the solar spectrum that reaches Earth’s surface is in the infrared range and produces heat, so doped windows could be useful in environmentally conscious design—filtering out heat and radiation while letting in visible light. In addition, the team’s research could lead to a deeper understanding of how light is absorbed by organisms in nature, a field called photobiology. Through greater understanding of how doped glasses can improve light absorption, the team has taken a step forward in developing better optics for scientific research and more efficient glass for a wide range of applications.