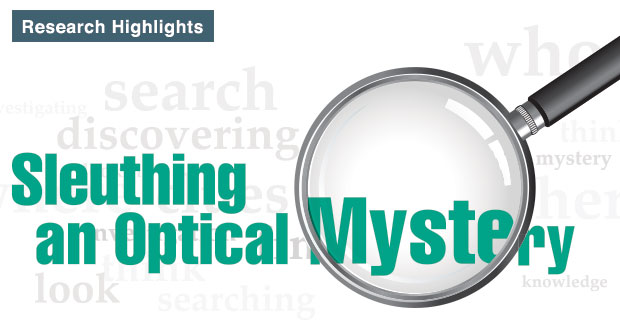 In the pursuit of science, the recipe for understanding complex phenomena can often require several parts perseverance and one part good old-fashioned detective work. Lawrence Livermore scientists have shown that this formula holds true for advancing our knowledge of laser optics and how to preserve their functional lifetimes for laser-based applications, including those at the National Ignition Facility (NIF).

Large-area optical components such as lenses, mirrors, and frequency-conversion crystals are essential for effectively directing and focusing laser energy onto a target. Many of NIF’s optics are made of fused silica because the material exhibits excellent properties, but they are also susceptible to damage when routinely subjected to the high energies produced by the laser. During manufacturing and processing, microscopic defects, called damage precursors, can form on an optic’s surface. These precursors absorb and transfer energy to the optic, initiating damage sites that grow with additional laser shots. Eventually the impaired components must be refurbished or replaced. Livermore scientists have been involved in a decades-long effort to understand the sources of damage with the goal of developing techniques for mitigating their negative effects.

In 2011, Livermore scientists completed a project funded by the Laboratory Directed Research and Development (LDRD) Program that resulted in the advanced mitigation process (AMP). AMP is a chemical-etching method that uses optimized hydrofluoric acid to remove damage precursors, such as the defect layers found on fractured surfaces associated with fine scratches or impurities. Scratches are introduced to an optic’s surface predominantly during the final polishing and handling phases of fabrication. “With AMP, we can effectively mitigate sources of damage and increase an optic’s lifetime,” says Jeff Bude, a physicist in the NIF and Photon Science Principal Directorate, who along with materials scientist Tayyab Suratwala helped lead the study. This process significantly reduces damage sites caused by precursors, primarily at lower energies—less than about 10 joules per square centimeter. (See S&TR, September 2011, Enhanced Damage Resistance for NIF Optics.)

In a more recent three-year LDRD study completed in 2014, Bude and colleagues set out to uncover the source of optics damage at higher fluences. “Despite our continued improvements, such as AMP, the surface damage threshold of most optical materials was still far below the intrinsic bulk limit of the material, which told us that other extrinsic factors were affecting optic performance,” says Bude. Through detailed detective work, they discovered that precipitates of trace impurities found in processing chemicals are the most significant damage precursors in the high-fluence range. The work demonstrated that by minimizing the presence of precipitates during chemical processing and drying, the silica damage produced from high-fluence events can be reduced by more than two orders of magnitude. The new process, called AMP3, has potential to significantly extend the functional lifetime of NIF optics, helping to further reduce overall operational costs and improve performance.

High-fluence damage precursors are characteristically different from their low-fluence counterparts in that they exist at much higher density and are spread more uniformly over an optic’s surface. In addition, low-fluence precursors are large enough to be seen with scanning electron microscopes or optical microscopes, while high-fluence precursors are much smaller—submicrometer in scale—and are not readily observable until the damage sites have been initiated, earning them the name “invisible” precursors. “Surface damage requires that an absorbing defect couples laser energy into the bulk material,” says Bude. “If one of these submicrometer precursors absorbs enough laser energy to reach temperatures at which the glass begins to absorb light, it can launch a damage-causing absorption front into the glass. Absorption by nanoscale precursors leads to macroscale damage.”

Identifying these precursors was challenging. In addition to being invisible, they seemed immune to initial AMP improvements. “Our first process changes did not improve the damage, which exceeded 105 sites per square centimeter at high fluence,” says Bude. “However, we knew from previous silica damage mitigation studies, that heating a small spot on an optic’s surface to about 2,000 kelvins for a few seconds could remove some of these precursors.” Bude and his team used this technique to locally increase the surface damage threshold for arrays of sites on AMP-treated silica substrates. They then passed these samples back through the steps of AMP to determine whether any of them reintroduced damage precursors to the heated regions. Surprisingly, the team found that each of the wet chemical steps produced damage precursors, even the deionized (DI) water rinse at the end of the process. Thus, the researchers concluded that precipitates of contaminants carried in the water and other processing liquids were a likely source of damage precursors.

To prove this hypothesis, Bude and his team performed tests to determine whether precipitates of trace impurities in processing liquids could absorb laser light and damage the optic. The team prepared test samples of 50-millimeter-diameter fused silica optics using AMP. Each step of etching, rinsing, and drying was carefully controlled to ensure the optics were as clean as possible prior to laser experiments. The entire process was conducted in a Class 100 clean room to minimize airborne impurities. Subsequently, the team applied different salt-based solutions of common impurities to the samples using an aerosol or direct aqueous deposition and then examined the impurities’ photoluminescence and propensity to damage.

Crystals of these salts—such as sodium chloride—do not absorb ultraviolet light in their bulk state and as such are typically used to create high-transparency optics. Interestingly, the team found that precipitates of these salts are photoactive and, when exposed to laser light, easily damage the optic’s surface. Bude explains, “What we found is that each of the salt crystals studied absorbed sufficient light to initiate a damage event, and the way a precipitate is formed governs its laser damage behavior more than its chemical composition and bulk optical properties.”

Because the concentration of impurities in these experiments was high, the precipitates were micrometer in size, much larger than the nanometer-sized damage precursors expected to be on actual AMP-treated surfaces. To determine whether nanoscale precipitates could also cause damage, the team sprayed optic surfaces with an aerosol of DI water. The formed droplets contained impurities naturally found in the water and at a much lower concentration than in the salt experiments. “The precipitates in this case were submicrometer in size and invisible to optical microscopy, but when exposed to laser energy, they created damage sites many micrometers in size,” says Bude. Such evidence led the team to deduce that precipitates of impurities derived from solutions during wet chemical processing could form high-fluence damage precursors on the surface, and that the DI water itself also may be to blame. The next step was to prove that these precipitates were the fluence-limiting precursors responsible for high-fluence damage. 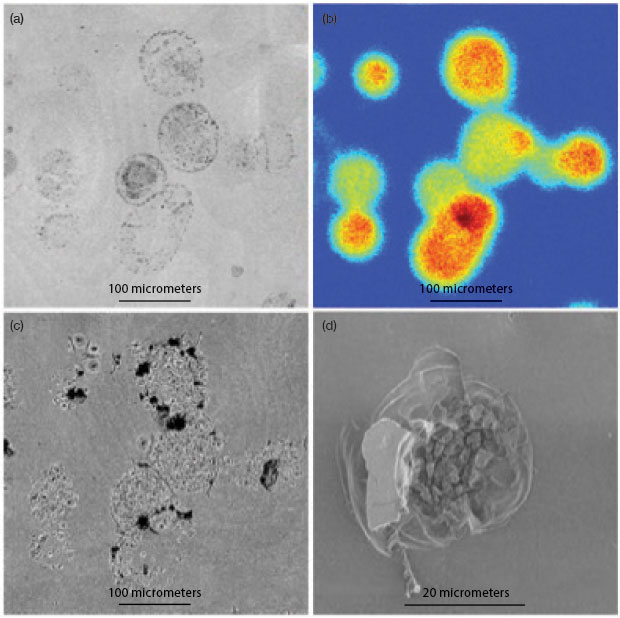 (a) Optics sprayed with an aerosol of deionized water showed no visible submicrometer precipitates under optical microscopy prior to laser exposure. (b) After large-area damage tests with nanometer light pulses, precipitate sites could be clearly seen.

The team sought to improve the damage resistance of the optics by reducing the sources and probability of precipitation during all wet chemical-processing steps. Pinpointing the exact source of impurities was no simple feat. “Anything could have been causing the problem,” says Bude. “Impurities could have been introduced by the equipment used to process the optics or by the chemicals for etching and cleaning. They could have even come from the DI water system itself or from airborne contaminants during the final drying process.” After working aggressively to isolate and analyze all of the steps, the team was able to significantly reduce the damage density on sample optics.

By surveying the parts produced in the experiments, the team finally found a direct link between precipitates and damage. Atomic force microscopy studies of the optics’ surfaces indicated the presence of precipitates, hundreds of nanometers in diameter and tens of nanometers high, and the concentration of these precipitates was correlated to the damage density.

The team then introduced controlled quantities of impurities in each step of the process to determine how pure the DI water and other processing chemicals needed to be to achieve stable damage-resistant surfaces. The researchers found that impurities introduced to the etch bath at 10 to 100 parts per billion produced a noticeable increase in damage even when the parts were rinsed with high-purity water after the etch. Ultimately, the team discovered that in an optimal process, impurities at parts per billion introduced at the end of the final rinse were predominantly responsible for the increased damage. In fact, the most damage-resistant surfaces required semiconductor-grade water with an impurity content too low to detect by standard conductivity measurements. 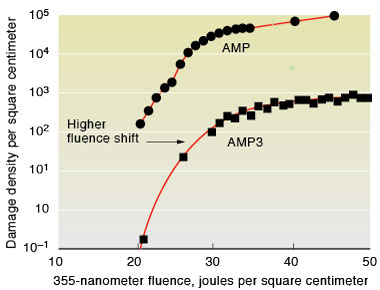 This graph compares damage density between the advanced mitigation process (AMP) and the newer AMP3, which is optimized to reduce the probability of precipitation from wet chemical processes. AMP3 achieves a 300 times reduction in overall damage density and a 7-joules-per-square-centimeter shift to higher fluences at 5-nanosecond pulses.

The team’s findings led to a comprehensive protocol for wet chemical processing (AMP3) that significantly reduces precipitation of impurities during critical steps. “In addition to processing all samples in a Class 100 clean room, we renewed all ion exchange beds used to prepare our DI water supply, introduced standardized high-purity Teflon fixtures, and instituted standardized pre- and postetch cleaning and rinsing protocols,” says Bude. “We have optimized the etching and rinsing to achieve a stable, damage-resistant surface.”

Not only can AMP3 reduce damage on optics by more than two orders of magnitude compared to AMP, but it also enables a 60 percent increase in the amount of energy that can pass through an optic without damage. Recent results show a continued progression toward zero damage through a reduction of 2,000 precursors in damage density, which doubles the damage threshold. AMP3 is now under development to be scaled to full-size NIF optics. Although Bude and his team suggest that further advances in understanding the complex chemistry involved in etching, cleaning, rinsing, and drying optical materials will lead to further NIF performance improvements and reductions in operational costs, its work has brought closure to a long-standing optics dilemma. “We met all our project milestones and deliverables to the point of eliminating high-fluence damage precursors for optics,” says Bude. For these scientists turned detectives, the case is closed on the source of high-fluence damage precursors and how to eliminate them.