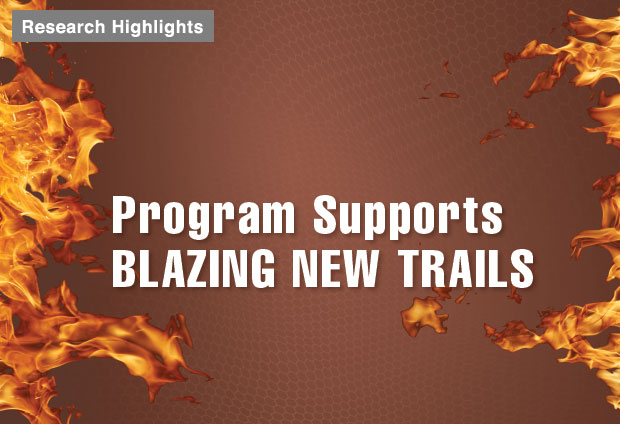 Science can make leaps in progress when researchers explore innovative ideas summoned from the deepest wells of their creativity. Lawrence Livermore’s Laboratory Directed Research and Development (LDRD) Program (see Investing in the Nation’s Future) encourages these “out-of-the-box” endeavors through its Laboratory-Wide (LW) category of projects. LWs are small projects that serve as incubators for proposals from early-career personnel. The funding allows these researchers to perform research that may not precisely align with Livermore’s investment strategy, but which is relevant to the institution’s missions. Such projects have potential to open new avenues of investigation and enable novel approaches to achieving mission objectives.

LW LDRD projects have helped a generation of Laboratory scientists establish their careers, and in some cases, research directions that become their life’s work. These projects have also taught them how to propose and present research proposals to a funding body and to organize and manage all aspects of a research effort, from overseeing the work and balancing budgets to assigning tasks and performing project administration. “The stronger our LDRD principal investigators (PIs) are, the stronger we are as an institution,” says Eric Gard, chairperson for the LW LDRD portfolio. “Through Laboratory-Wide projects, we are attempting to prepare our people and their technologies for the real world. This category of research helps scientists develop the technical skills they need to succeed in science.”

To receive LW LDRD funding, a researcher must submit a written proposal, which is evaluated by a review committee. If the proposal makes the cut, the researcher must then make an oral presentation. LW LDRD projects are extremely competitive, and thus winning one is a major achievement. PIs are provided a maximum of $300,000 per year for two years. Awardees can obtain funding for an additional third year, but they must compete with new LW proposals and prove that the extra time is needed. The LDRD Program offers coaching to help submitters write their initial funding proposals and, if they are selected, prepare for their subsequent oral presentations in front of the review committee. 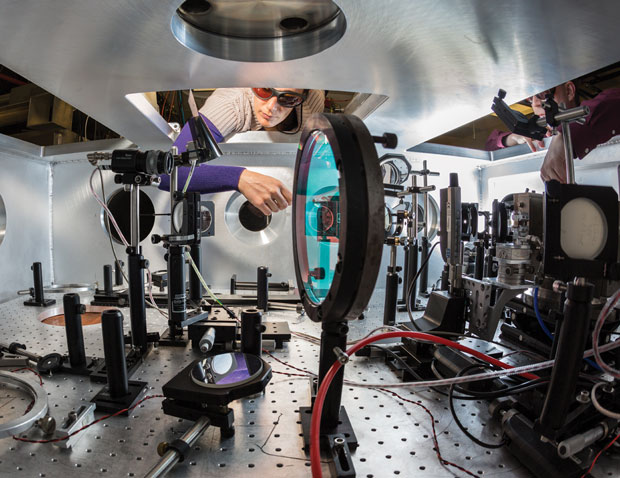 Physicist Félicie Albert is one Livermore scientist for whom LW LDRD funding made a difference. “Support through the program was game-changing,” she says. “It allowed me to explore scientific ideas I would not have been able to investigate otherwise and to form collaborations with universities. It was also critical to my winning a Department of Energy Early Career Research Program (ECRP) award.” The ECRP award is a prestigious grant that offers young investigators five years of funding up to $2,500,000. 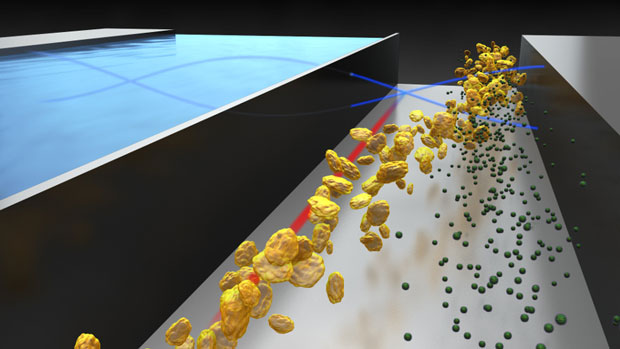 Livermore scientist Maxim Shusteff is developing a steady-state, cell-culturing platform for viruses. A rendering of the technology shows cells (yellow) and viruses (green) being separated by an acoustic field (blue lines). Fluid flow is toward the viewer, with a stream of mixed particles entering the device side-by-side with a clean fluid stream. The acoustic field moves the cells toward the pressure node (red line) and into the clean fluid, while the undeflected viruses continue straight, exiting the device through a separate outlet (not shown). (Rendering by Kwei-Yu Chu.)

A More Realistic Look at Pathogens

Viruses, the causal agent behind many difficult-to-cure diseases, readily reproduce within live hosts. Viruses mutate quickly, presenting a moving target, and making viral diseases difficult to treat. Scientists have been slow to develop successful antiviral therapies because studies of viruses in laboratory animals are expensive. Many studies make do with culturing viruses in flasks, but the pathogens and the cells they infect last only a few days—too short to follow them through multiple mutations.

LW LDRD funding offered Livermore engineer Maxim Shusteff, an expert in microfluidic technology, to apply his expertise toward developing a new technology that could have a substantial benefit on a significant scientific problem—how to culture viruses in a realistic environment to study their mutations and develop effective therapeutic agents. Through his LW LDRD project, Shusteff and his collaborators at the University of California at San Francisco have developed a technology to allow viruses to infect tissues in a steady-state, cell-culturing platform. This platform allows the team to continuously introduce new cells into and remove older virus-infected cells from a tissue culture. First, viruses infect mammalian cells in a bioreactor. An acoustic separator then filters out free virus particles, allowing the infected cells and viruses to be extracted separately for genetic sequencing and analysis, while fresh media, and, if needed, new, uninfected cells, flow into the bioreactor. Shusteff says, “Our system controls the cell population continuously and allows the tissue-infection process to proceed in a more lifelike way.”

LW LDRD funding let Shusteff investigate the potential of this technology and the scientific context where the device could be helpful. “Great ideas for a technology have to address an important scientific space,” he says. Having completed the third year of his LW LDRD, Shusteff’s team is looking forward to culturing the cells of multiple organs and biological systems—for instance, the lungs and the immune system—for study in his viral platform. 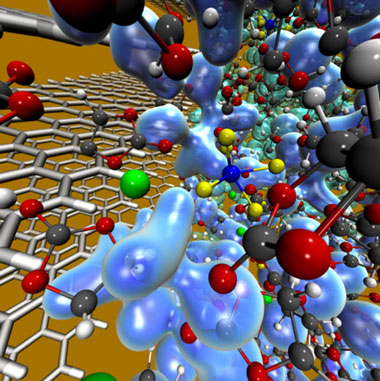 Qbox is a first-principles molecular dynamics code written to carry out large simulations on massively parallel supercomputers. This image is taken from a 25-picosecond, 1,700-atom simulation of a lithium-ion cell anode–electrolyte interface. Livermore computational scientist Erik Draeger continues developing the open-source Qb@ll version of the code.

Livermore scientists who obtained LW LDRD funding early in their careers speak glowingly of its influence on establishing their research directions. “The program was pivotal to my career at Livermore,” says Erik Draeger, now group leader of Livermore’s High-Performance Computing Group in the Center for Applied Scientific Computing. “My mentor at the time encouraged me to explore a project outside the scope of my postdoctoral work. It was a useful exercise for me to go through the process of developing a written proposal and a presentation—even if I didn’t win.” But win one he did, and in 2004 he set out to develop a molecular dynamics simulation of the human P450 CYP1A2 enzyme, which plays an important role in mediating the effects of carcinogens in the body.

The simulations required developing a hybrid of classical and quantum dynamics methods. Although trained in theoretical condensed matter physics, Draeger began focusing on computational biology because of this project. “I discovered that my passion was creating new capabilities to help make scientific discoveries possible,” he says. Draeger went on to work on a supercomputer code called Cardioid that realistically mimics the electrophysiology of a beating human heart. He has also continued to develop Qbox, a first-principles molecular dynamics code that uses density functional theory to compute the electronic structure of atoms, molecules, solids, and liquids.

In 2015, Draeger became a mentor to then Lawrence Scholar Amanda Randles, and seeing the benefit of LW LDRD research, encouraged her to propose her own project. After winning the funding, she began her endeavor to validate large-scale fluid dynamics simulations of objects with complex geometries. The intent of the project was to adapt three-dimensional (3D) printing to create objects that accurately replicate biological structures, such as the circulatory system. First, the project team extended a code called Harvey to simulate fluid flow through blood vessels. Then, the Livermore researchers collaborated with a team at Arizona State University (ASU), which 3D-printed blood vessels, such as the aorta, and measured their fluid dynamics. The Livermore team validated Harvey against ASU’s observations of the printed blood vessels.

Randles is now an assistant professor of biomedical engineering at Duke University, where she is establishing a laboratory to use computational tools for studying the evolution of diseases such as atherosclerosis and cancer. She says, “The LDRD project was essential to validating the Harvey code. It helped us demonstrate that the code provided similar velocity profiles to what was discovered in the experiments—even for highly turbulent flow.” As with Draeger, Randles’ project also provided her with a new career path. “Although I was trained in physics and computer science, the LW LDRD work enabled me to move into biomedical engineering.” From her post at Duke, she continues to collaborate with Draeger, as well as with Livermore biomedical engineer Monica Moya, who is working on an LDRD to create a full vascular system using 3D printing. (See S&TR, March 2016, Bioprinting Extends the Frontiers of Medical Treatment.)

According to Draeger, one of the major benefits of the LW LDRD process is learning how to sell an idea. “Not everyone understands why the proposed research is important. When a scientist or engineer is in front of the selection committee, that person must prove the project’s significance to the reviewers. Learning how to communicate, how to tell your story convincingly, is an important skill.”

To current and future Laboratory researchers who seek to broaden their research horizons and scientific reach, the LW LDRD projects are a prime avenue to follow. However, not every attempt at funding yields success. Albert focuses on not giving up, echoing advice that is a universal feature of success: “If you have a good idea, be persistent. It took several tries before I won my LDRD—but the reward is well worth the time and effort you put into it.”