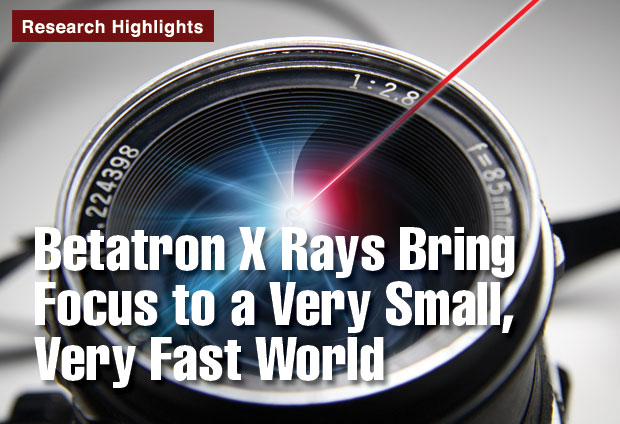 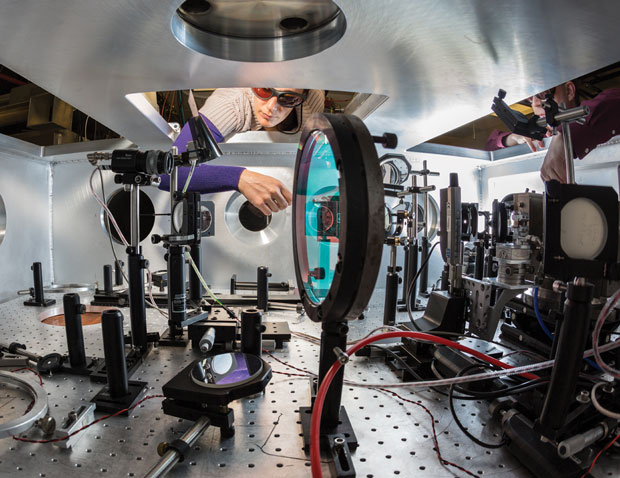 Hit ’Em with Your Best Shot

At the heart of the betatron x-ray experiments are Livermore’s 200-terawatt Callisto laser and a cell (just a few millimeters long) filled with a gas. Callisto uses chirped-pulse amplification to produce a 60-femtosecond-long pulse of ultrahigh intensity light. The laser’s 13-centimeter-diameter beam is focused under vacuum onto the cell’s 500-micrometer entrance pinhole within a spot diameter of 12 micrometers and up to intensities of 1019 watts per square centimeter. The cell is typically filled with helium, although Albert’s team has also experimented with nitrogen, carbon dioxide, argon, and neon.

As the leading edge of the pulse encounters the edge of the gas cloud, the pulse strips electrons from the gas molecules, creating a plasma of positively charged ions and free electrons. The pulse creates a plasma cloud as it continues to travel through the gas. The light pressure of the pulse’s peak pushes the free electrons in the cloud away from the laser pulse, similar to how the prow of a boat pushes water away from the bow. The ions, which are about a thousand times heavier than the free electrons, are too heavy to be moved by the light pressure. Thus, as the pulse passes by, it leaves a positively charged “bubble” populated only by ions in its wake.

Just as some of the water displaced by the boat prow will circle around and be trapped by the boat’s wake, some of the electrons shoved aside by the light pulse will circle back and be drawn into the wake of the pulse, that is, the ion-filled bubble. The “wakefield” electrons accelerate through the positively charged bubble, oscillating rapidly in a sinusoidal path and emitting x rays. These laser-wakefield betatron x rays are synchronous with the initial laser pulse on the femtosecond timescale.

During Livermore’s laser-wakefield betatron x-ray experiments, an intense laser pulse strips electrons off gas atoms, forming ions and free electrons. The electrons are pushed away by the intense laser light, and some circle back behind the pulse to be captured in the positively charged ion bubble in the pulse’s wake. As the electrons accelerate through the positively charged ion bubble, they wiggle, emitting betatron x rays.

Using Callisto to generate laser-wakefield betatron x rays sidesteps some of the drawbacks of producing high-energy x rays with other sources, such as synchrotrons and free-electron lasers. In a synchrotron system, such as the one at Argonne National Laboratory’s Advanced Photon Source, electrons from a storage ring are wiggled by undulator-produced alternating magnetic fields. The oscillating motion causes the electrons, which are traveling at close to the speed of light, to release broadband or monochromatic hard x rays of extreme brightness. These x rays are picoseconds in pulse length, slower than the femtosecond-long pulses and the motion of atoms in molecules and plasmas that might be studied with bright x rays. Free-electron lasers, such as SLAC’s Linac Coherent Light Source, produce coherent, femtosecond x-ray pulses with high brightness but in narrow spectral and energy bands. These pulses are also typically in the soft x-ray regime (about 8 kiloelectronvolts).

Another drawback with other x-ray sources is that the systems require massive facilities, and the complex machines are expensive and kilometers in length. In addition says Albert, “Relatively few of these facilities exist worldwide. Potential users must compete for time with each other, and experiment schedules can fill up years in advance.” The betatron x rays produced with laser wakefields achieve the perfect trifecta: hard x rays (potentially up to 100 kiloelectronvolts) of high brightness and femtoseconds in length. Plus, these x rays have some degree of spatial coherence and can be produced on a tabletop-sized system.

Probing the Nature of Matter

In the first year of a Laboratory Directed Research and Development project to explore the nature and applications of laser-wakefield betatron x rays, Albert and her team at Livermore, including Lawrence Fellow Bradley Pollock, characterized the experimental source and benchmarked results against numerical particle-in-cell simulations. In collaboration with UCLA professor Chan Joshi and his group, the Livermore researchers also produced betatron x rays among the highest ever demonstrated—up to 80 kiloelectronvolts—and performed preliminary imaging experiments. In addition, they measured for the first time the angular dependence of betatron x-ray spectra in a laser-wakefield accelerator. “These data will help in designing future HED science experiments using this kind of source,” says Albert.

The project is now focused on applications, particularly those involving single-shot, ultrafast absorption spectroscopy—a powerful tool for studying the local atomic structure in materials. Says Albert, “Here at Livermore, femtosecond betatron pulses could eventually take ultrafast snapshots of National Ignition Facility experiments. They could also be used for nondestructive imaging and for a wide range of HED science experiments.”

The beauty of laser-wakefield betatron x rays is that they allow scientists to take femtosecond-long snapshots of ultrafast electronic and molecular changes in materials and possibly uncover details that have been previously unseen. The team also plans to use the source to perform optical pump and x-ray probe experiments for HED studies. “We hope to gain information on plasma temperature, density, and ionization-state dynamics,” says Albert. “In addition, we will have the opportunity to explore the poorly understood properties of warm, dense matter at the atomic level with femtosecond resolution.” Albert notes that this remarkable x-ray tool could potentially be used to discover new physical properties of materials at the high pressures and temperatures found only in planet interiors and fusion plasmas.

In experiments scheduled for the summer of 2014 at the Astra Gemini laser in the United Kingdom, the researchers, in collaboration with scientists from Imperial College London, will use betatron x rays to probe shocks and dense, transient states of matter. The initial optical laser pulse will shock iron samples and create the betatron x rays for imaging how those iron molecules relax back to an equilibrium state. “For the first time, we will be able to shock an iron sample and view the shock wave’s propagation through the sample with femtosecond precision,” says Albert. Because the betatron x rays and the pump are produced by the same laser, the optical and x-ray pulses will be perfectly synchronized.

Albert hopes to conduct other experiments using x-ray pump and probe. “Pumping a sample with x rays will allow us to observe different phenomena,” she says. “It’s an exciting possibility that we are still exploring.” Albert anticipates that the source will be further developed for future high-energy, high-repetition-rate laser systems such as the High-Repetition-Rate Advanced Petawatt Laser System currently being built at Livermore for the Czech Republic (see Lighting a New Era of Scientific Discovery). “Such sources will facilitate application experiments by providing higher repetition and more stable betatron x rays,” says Albert.

More applications beckon on the horizon, as these x rays could be used in any research involving ultrashort synchrotron radiation. At the femtosecond timescale, delivered with a compact source, the sky looks to be the limit for laser-wakefield betatron x rays.