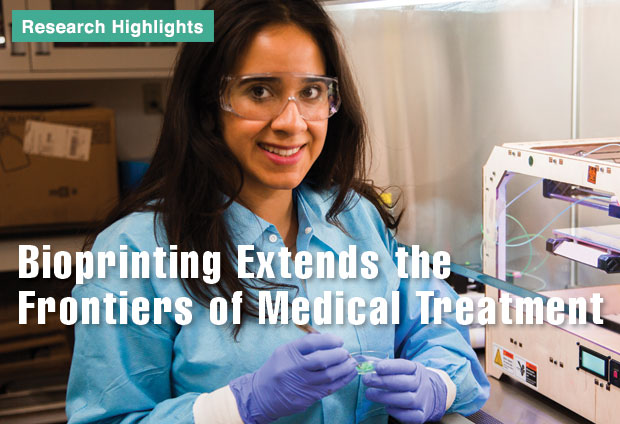 Three-dimensional (3D) printing continues to drive innovations in many disciplines, including engineering, manufacturing, aerospace, global security, and medicine, to name only a few. Most 3D products are made of plastics or metals, but cutting-edge 3D printing techniques have been leveraged in the biomedical engineering field using bioinks—a fluid with biological components—to manufacture vascularized tissue. Once refined, this approach could be used to engineer complete human organs for implantation and to assess medical treatments.

A Lawrence Livermore team, led by biomedical engineer Monica Moya and supported by Livermore’s Laboratory Directed Research and Development Program, has been refining a bioprinting approach for two years. The process involves producing and printing bioinks with cell-containing materials and a viscosity similar to that of honey. A bioprinter deposits the bioink into a specially designed sectioned device that acts as a sort of dynamic petri dish, establishing a feeding system to direct the growth of a vascularized network.

The team has already created vascularized tissue patches and envisions some day establishing hierarchical vascular networks similar to those in the human body, as a step toward developing larger 3D organs. Moya says, “Having a hierarchical, vascularized patch of tissue—meaning tissue with vessels that can be connected to and perfused—has great potential for medical implantation.” These patches could transform approaches to organ repair, disease remedy, toxicology, and medical treatment testing.

A Dish for Feeding

The team uses two different bioinks, each with ingredients engineered for specific printing approaches. All bioink components are derived from materials found in the human body or elsewhere in nature and modified for printability. The first type of bioink is self-assembly bioink, which forms the tissue material and contains endothelial cells, fibrin, and fibroblast cells. This bioink is printed into the center section of the petri dish, with its endothelial cells forming the lining of blood vessels and generating the microvascular structure (see the box below).

The fibrin in the self-assembly bioink results from the interaction of fibrinogen and thrombin, a combination of materials that the body uses to clot bleeding and form scabs. In the bioink, fibrin provides a temporary scaffold for tissue formation. The fibrin-based scaffold cues the fibroblast cells, which create structural supports, to go to work much like the cells would react to heal a wound. In this case, the cells replace the temporary scaffold with a more permanent structure, thus forming the vascular networks.

The self-assembly bioink is lined on two sides by printed biotubing, which is formed using a second bioink consisting of fibroblast cells and alginate, a biocompatible, viscous polysaccharide obtained from seaweed. The tubular structure is created by flowing the substance through a coaxial needle—a needle within a needle. Once laid down in the desired pattern, the tubing is locked into place by introducing calcium into the inner portion of the alginate tube. There, the positively charged calcium ions react with the negatively charged alginate, hardening the latter. Although stiff, the hardened biotubing is permeable to nutrients—much like blood vessels in the human body—so that fluid infused into the tubing diffuses into the surrounding tissue environment. 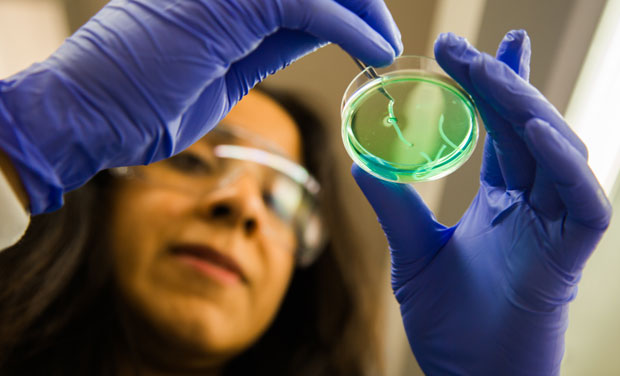 Surrounded by the self-assembly bioink, strands of biotubing consist of fibroblast cells and alginate, a biocompatible, viscous polysaccharide generated from seaweed. The tubular structure is created by flowing the substance through a coaxial needle. (Photograph by Lanie L. Rivera.)

(left to right) To create vascularized tissue patches, coaxial channels are printed in a “dynamic” petri dish, where the printed product evolves after the material is initially laid down by the bioprinter. The innate network-forming instinct of the living cells in the mixture results in the growth of vascular networks, which supply nutrients to the cells that comprise the tissue. (See the full animation.)

In this project, Moya’s team used a commercially available 3D printer for inorganic materials, which presented some hurdles. Cells cannot survive the high temperatures reached inside the printer’s nozzles. Similarly, nozzle size presented a challenge—the narrow openings that enable high-resolution deposition can also subject cells to damaging levels of shear stress. To mitigate these issues, co-investigator Elizabeth Wheeler, who specializes in bioengineering and microfluidics, replaced the existing fluidics system with one suitable for bioprinting.

Wheeler notes that biomaterials are sensitive to flow rate, which must also be balanced with bioink viscosity. Immediately before the pumping and printing, the printer mixes the components of the self-assembly material, which immediately start to gel, altering the bioink’s viscosity and affecting the rate of extrusion. The team conducted rheology tests to help understand the exact point at which the materials gel. For printing, the ink should be in a liquid state, but not too watery—otherwise the gel will form puddles when it hits the print stage. The bioink may spray out if deposited too quickly but could clog the nozzles if deposited too slowly. “Elements of bioprinting, including the printer specifications, pose a sort of Goldilocks problem—everything has to be just right,” explains Wheeler.

Once printed, the fibrin-and-cell bioink begins to generate vascular networks, directed by the cells’ innate blueprint to form networks. “In contrast with additive manufacturing techniques, what we print is not the end product but the building block,” notes Moya. “The cells self-assemble into the final form of the tissue patch.” In the human body, vascular networks organize according to biochemicals (such as nutrients and other growth factors) or mechanical gradients (flow or pressures). Cells pay attention to these cues because in the body they guide the cells to arteries that carry oxygenated blood and nutrients to the surrounding tissues. However, in the bioink mixture, the cells are surrounded by a nutrient-rich chemical solution without variance in chemical or mechanical cues. As a result, they form undirected, spaghetti-like networks.

In the airtight device where the tissue patch forms, the biotubing acts as feeding tubes for the self-assembly material, supplying a sugary, protein-laden, oxygenated liquid whose nutrients sustain cell life and fuel vascular network formation. Nutrient density is tailored to direct vascular network growth, in a manner similar to how cells in the body propagate toward nutrient-dense areas, where they receive biochemical and mechanical cues to create a hierarchical vascular network. Most cells in the body are within 100 to 200 micrometers—approximately the thickness of human hair—of a vascular source of nutrients. Moya intends to mimic this hierarchy by more specifically dictating nutrient diffusion and concentration. “We harness the cells’ own engineering potential by printing the cells into an initial configuration, then altering the environment with chemical flow to guide cell growth,” adds Wheeler.

Eventually, the ionic interaction between the alginate and calcium will deteriorate, and the biotubing will break down. By that time, the endothelial cells will have rebuilt the manufactured vessels to establish a new network. “Similar to implantation of artificial veins or arteries, the material needs to be rigid in the beginning, with an understanding that eventually it will dissolve, and cells will replace it with their own version,” says Moya. Allowing cells to transform the tissue naturally increases the potential for the patch of artificial tissue to better integrate with the body. 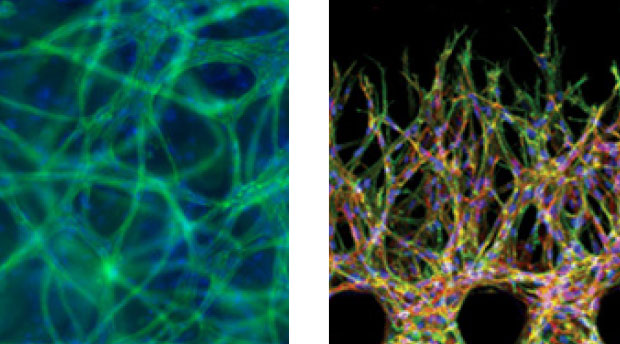 Directing vascular network growth using nutrient concentration gradients is a strategy that Livermore is pursuing to create a hierarchical network similar to that naturally formed in the human body. (left) An equal distribution of nutrients results in a spaghetti-like vascular network, whereas (right) a gradient in nutrition concentration creates a greater density of blood-vessel analogues where nutrients are denser. (Image on right courtesy of the Royal Society of Chemistry.)

Moya and Wheeler’s team has successfully produced vascularized tissue patches 1 centimeter by 1 centimeter in size and containing biotubing up to 1 millimeter wide. They hope to soon achieve even larger tissue patches, as well as a perfusable, or flow-enabling, hierarchical vascular network. This effort will be aided by a new, higher resolution bioprinter recently installed at Livermore. “The prize in the sky is to be able to print organs,” says Moya. “To do that requires having stable vasculature in place, which is what we have established.” Bioprinting complete organs could potentially mitigate some of the complications associated with current transplantation processes, such as transplant rejection and organ shortages.

Although bioprinting a full-size human organ is far in the future, the ability to print small tissue patches and small-scale organs has the immediate potential to impact the development of drugs and the testing of medical treatments. Embedding targeted cells into these bioprinted patches could even have therapeutic potential. For example, Type 1 diabetes, a disease caused by low insulin production, could be remedied by embedding insulin-producing islet cells into a vascularized tissue patch, which could be implanted anywhere in the body. Achievements at the frontier of bioprinting will transform medical applications, including drug research, toxicology, and treatment testing, furthering Lawrence Livermore’s contribution to human medicine.