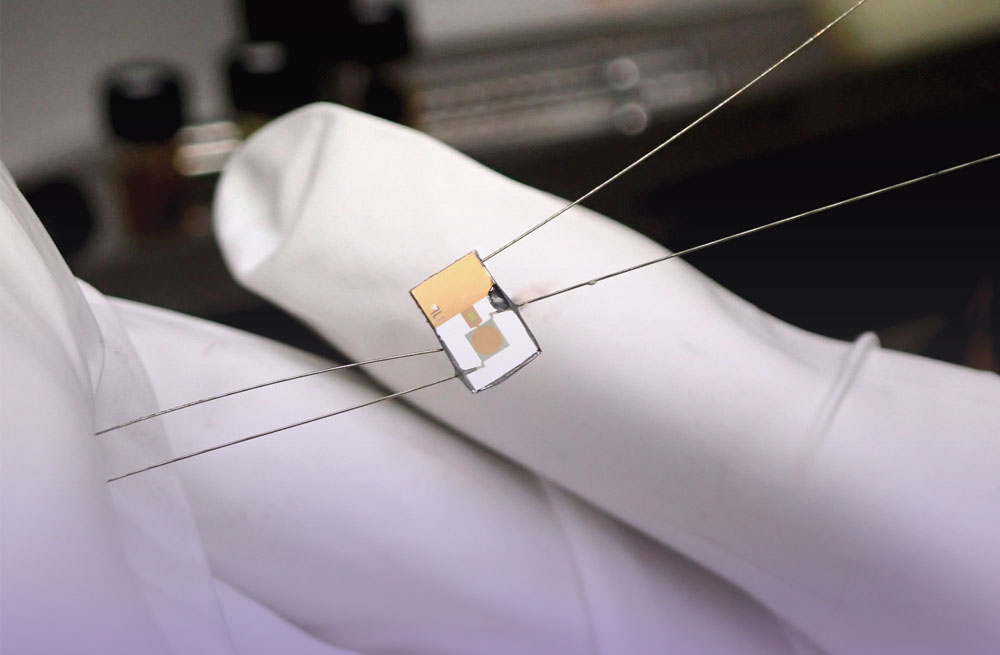 From small traditional alkaline batteries that energize flashlights to larger lithium-ion ones that drive electric vehicles, batteries come in many shapes and sizes for various applications. At Lawrence Livermore, engineering and material experts are researching, developing, and prototyping 3D nuclear batteries—tiny, high-density power sources useful for remote applications, such as in biomedical implants, where operating at low power for longer periods of time (up to decades) is essential.

Nuclear batteries contain radioactive substances that emit energetic alpha or beta particles through radioactive decay. Semiconductors within the device capture and convert the decay energy into electricity. The radioisotope and the semiconductor materials as well as the type of battery—alpha versus betavoltaic—dictate the overall power performance.

Bolstered by Livermore innovation in advanced microfabrication, engineering, materials science, and nuclear chemistry, Livermore researchers are exploring an extensive battery design portfolio that includes different radioisotopes as well as semiconductor materials in various states—solid, gas, and liquid. Electrical engineer and deputy program manager for the Laboratory’s Energy and Homeland Security Program Rebecca Nikolic says, “We are investigating different media to determine the most robust and economical approach for various applications.” 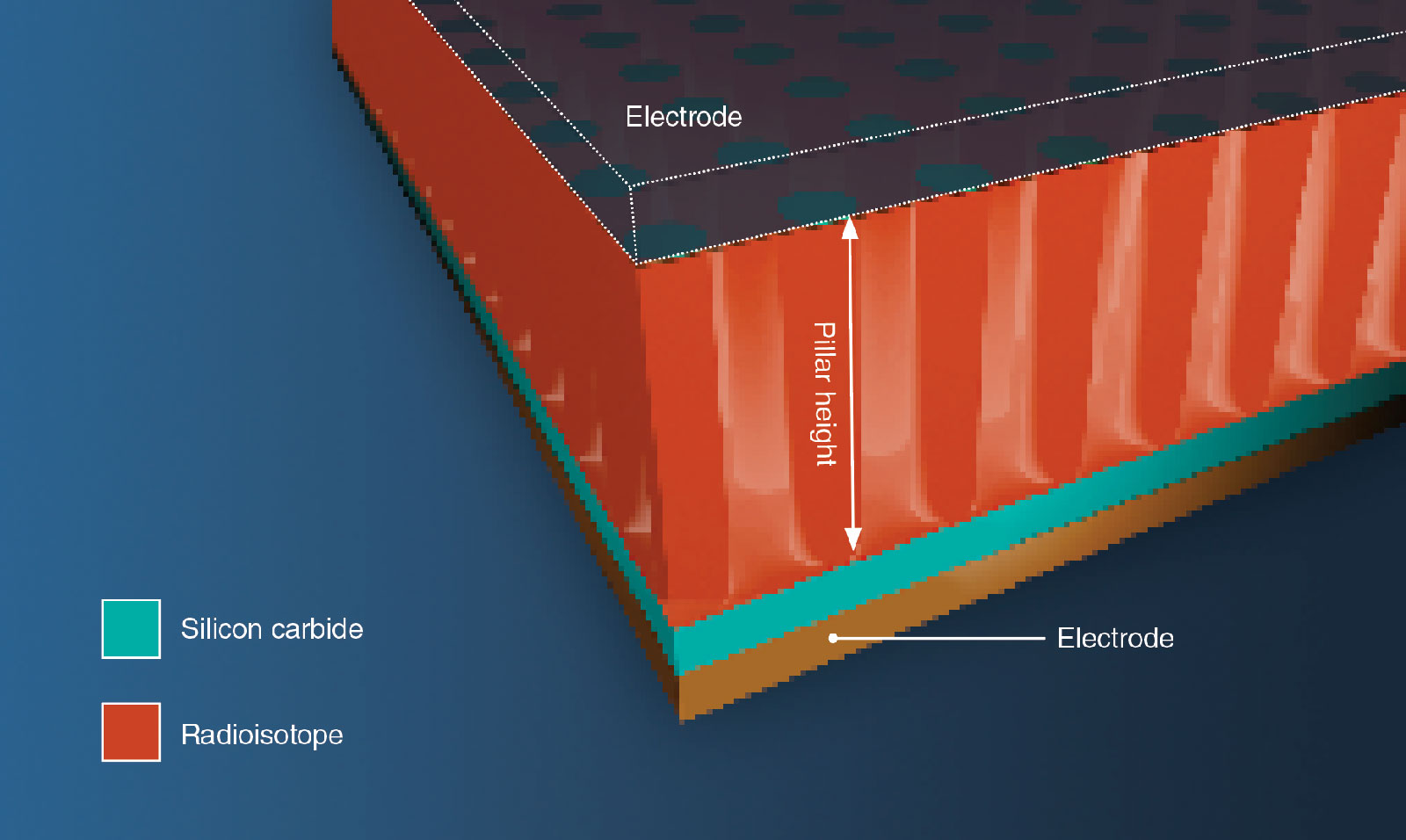 A Livermore-developed 3D nuclear battery design features pillars made from silicon carbide surrounded by a radioisotope such as promethium-147. Beta particles emitted from the radioisotope interact with the semiconductor to generate electric current.

Extensive characterization testing of the battery has revealed surprising material behavior. “Using an electron beam gun at Livermore, we irradiated both silicon and silicon-carbide diodes at different energies and varying fluxes and fluences to accelerate material aging without the radioisotope present,” says Jarrell. The results were counterintuitive. Although silicon carbide is known for being radiation hard—more resistant to damage from ionizing radiation—than silicon, above 100 kiloelectronvolts, silicon outperforms its competitor. Jarrell continues, “The results suggest that silicon may in fact be a better semiconducting material for promethium-based betavoltaics.” The team is also evaluating what other radioisotopes could be incorporated into this design. Nikolic says, “Although promethium was used to develop a viable 3D battery, supply chain issues and increased costs associated with it meant that we needed to identify alternatives.”

To prevent radiation damage to the semiconductor photocell, the ceramic is inserted between the strontium-90 source and the photocell. The ceramic absorbs the higher energy beta particles and emits photons benign to the semiconductor. Alternating layers of the structure can be sandwiched together to further enhance power density. “This technology is promising because it is radiation hard to sources useful for nuclear batteries,” says Jarrell. “We have many variables to consider, including gamma-ray emissions produced during decay. To overcome this challenge, we need to identify better shielding options.”

Another battery design has roots in Livermore’s work with rare-event detectors—such as those in development to detect dark matter for the first time—wherein particles interact with xenon atoms to create photons and electrons that provide measurable signals of the incident particle. For 3D nuclear batteries, the team uses a high-pressure xenon gas to create a scintillation signal from alpha-emitting radioisotopes. “The alpha particles transfer energy to the outer electron shells of the gas atoms as they pass through the xenon, creating excimers—unstable and short-lived molecules that emit ultraviolet photons when they separate. The photons bounce through the gas until a solar cell captures and converts that energy to an electric current,” says Jarrell.

With this alphavoltaic design, the team can squeeze many thin layers of the battery structure into a small space to increase the power density. “The system must operate under vacuum to maintain high gas purity, which is essential for battery output, since the decay energy will seek any way to disperse itself besides interacting with xenon,” says Jarrell. Maintaining the extremely high purity is a complicated procedure that requires exact pressures and temperatures. He notes, “We are looking at NASA-developed, small, lightweight, stainless-steel vessels to scale down the battery to a realistic size.” 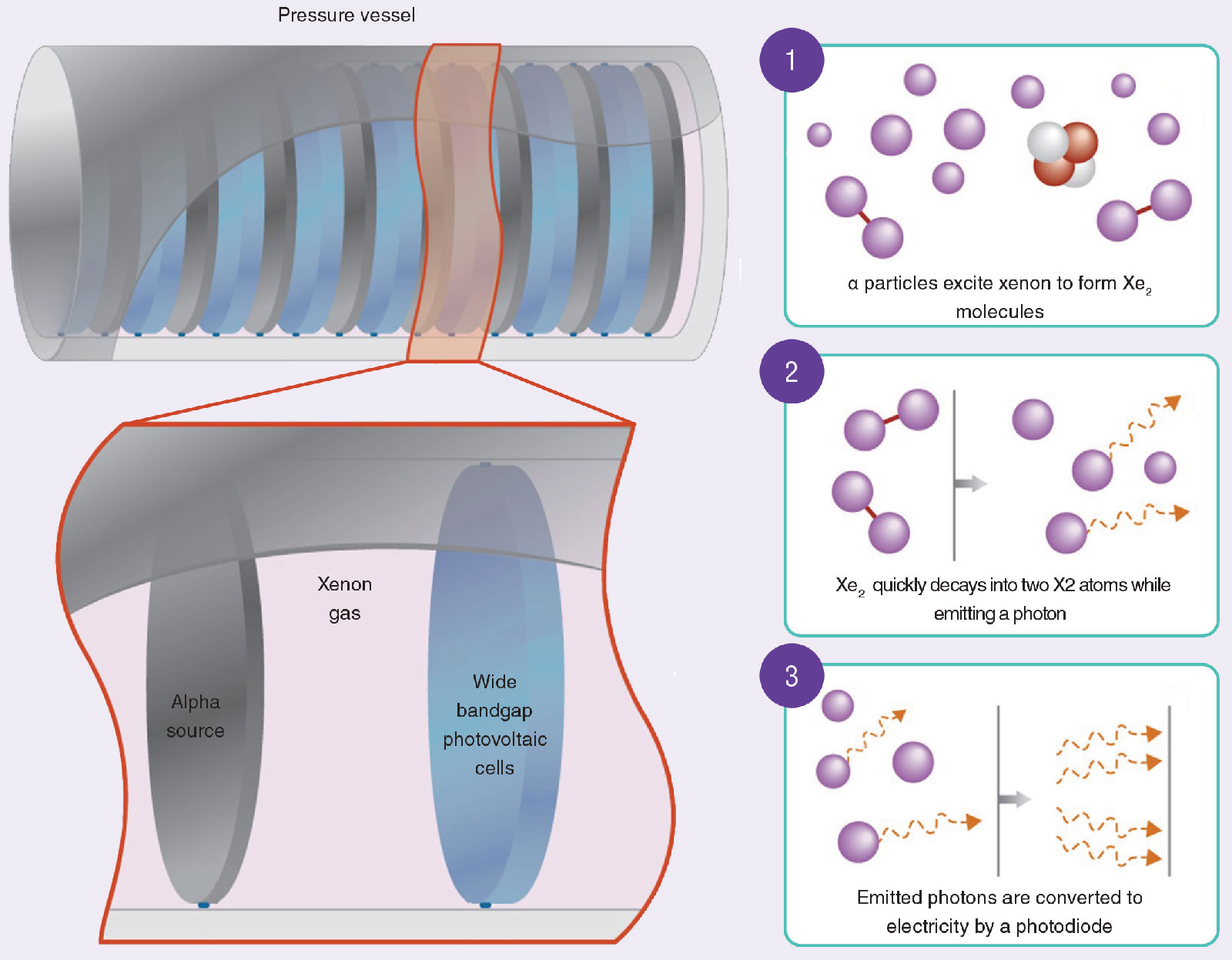 Inside a noble gas-based 3D battery, alpha particles pass through xenon (Xe), transferring energy to the gas atoms and creating excimers that quickly separate. This separation results in emission of a photon, which is then converted to electricity by a photodiode.

Researchers are testing the efficacy of transparent ceramic scintillators (samples shown here) for use in 3D batteries. In one battery design, a polycrystalline transparent ceramic photocell absorbs high-energy beta particles and emits photons benign to the semiconductor.

In 2017, the research team made headway on a battery containing liquid selenium–iodine, a mixture that works well as a semiconductor and a photovoltaic but is highly caustic. (See S&TR, April/May 2017, Prolonged Power in Remote Places.) “Liquid selenium–iodine is like a bull in a china shop,” says Jarrell. “The two substances are corrosive on their own, but when we combine, heat, and irradiate them, they become even more corrosive. It’s really a nightmare environment. For this type of battery to work, it must be stable for decades and remain free from radiation leaks.”

Leveraging the Laboratory’s microfluidics capabilities and expertise, the team developed a novel housing structure for the radioactive and semiconductor materials. The selenium–iodine mixture is poured into a tiny cavity etched into a silicon chip. Once the mixture has been added, a layer of glass is chemically bonded on top of the chip. “One of the challenges with this design was making the glass window thin enough so that the alpha particles would pass through it rather than stop. The window is just a few tens of micrometers—thinner than a strand of human hair,” says Jarrell. The whole microchip design is a few millimeters in size and about a millimeter thick.

The chips are undergoing characterization testing, and the team is working to scale up the design by adding multiple chips together in a single unit. The researchers are also investigating alternative methods for incorporating the radioactive material into the semiconductor. Currently, the work requires a special, sealed glovebox to add the selenium–iodine mixture to the chip. Jarrell notes, “We are exploring whether we can make and use a sealed source by electrodepositing it onto a surface, which would eliminate the need for the glovebox. The material can’t physically go anywhere, but the radiation can still escape from the source to produce energy.” The team is excited about the prospects. “We recently generated a small amount of power with this prototype, which is a big step in the right direction.” 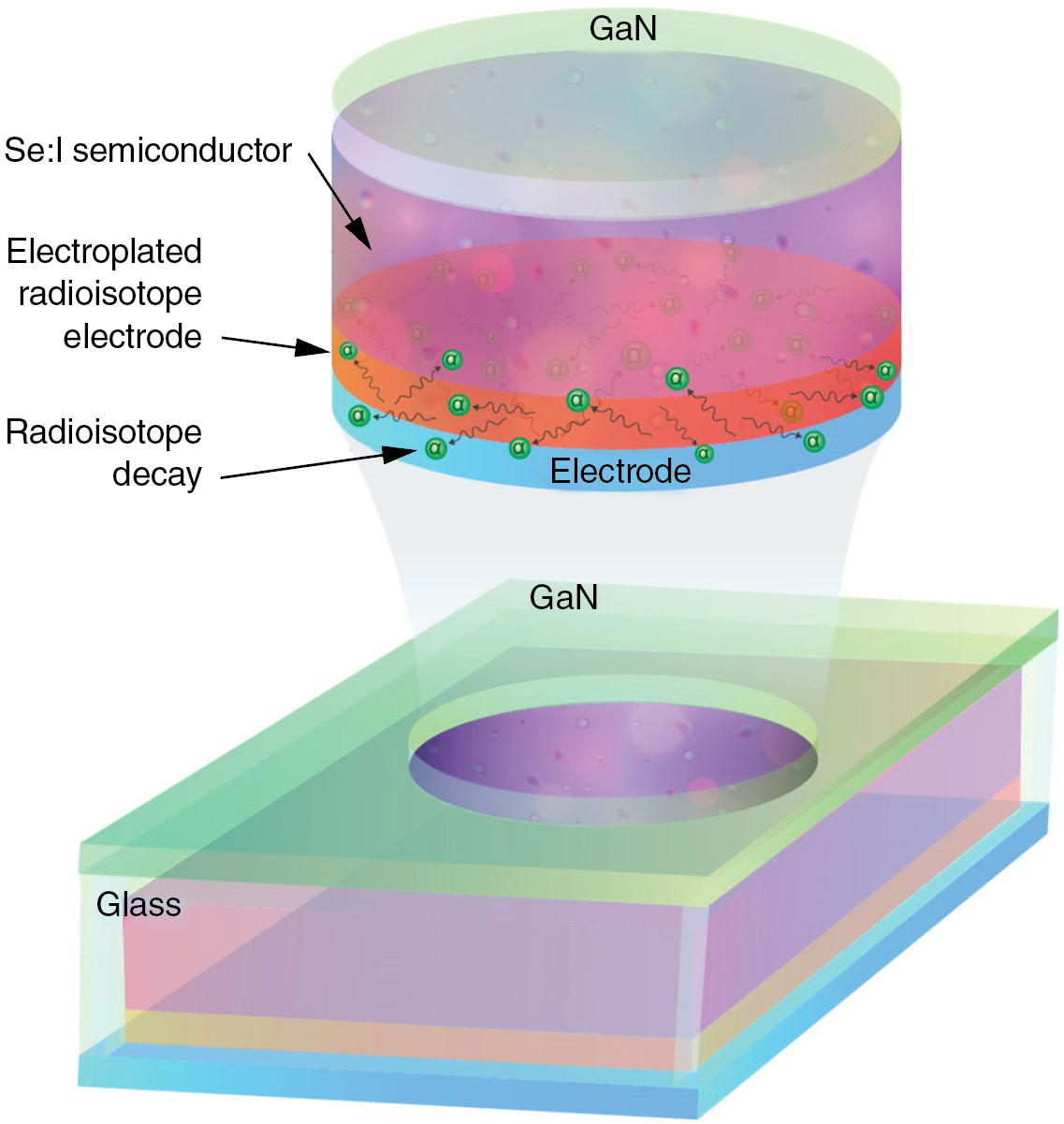 This schematic shows the housing design of a 3D battery containing an electroplated radioisotope and a selenium–iodine (Se:l) semiconductor. A bonded glass and gallium–nitride (GaN) substrate sandwiches the materials together to improve power density.

Since 2016, Livermore has hosted three collaborative workshops with external partners from industry, other government agencies, and academia to facilitate the exchange of scientific ideas in support of 3D nuclear battery development. The most recent workshop, held in 2020, focused on improvements in power density. Jarrell notes, “The goal was to see how much more power we could get from a specific volume.”

In addition to their other battery designs, the Livermore team worked in partnership with City Labs, Inc., to enhance a commercially available tritium-based betavoltaic. “We demonstrated the ability to absorb low-energy beta particles more efficiently,” says Jarrell. Chief Executive Officer of City Labs Peter Cabauy adds, “Lawrence Livermore was a valuable partner as a premier institution in understanding tritium and the regulatory requirements associated with using the material. The interaction with the Laboratory has also given us perspective on new applications and approaches.”

Cabauy also notes that when most people think of nuclear, images akin to Homer Simpson and his power plant come to mind. “The reality is much different,” he says. “When we talk about nuclear batteries, we mean extremely small, even millimeter-scale power sources that can provide power for decades. Imagine a rice grain–size battery placed in a tiny pacemaker that could work for the life of the patient.” Their footprint may be small, but 3D nuclear batteries have big potential.