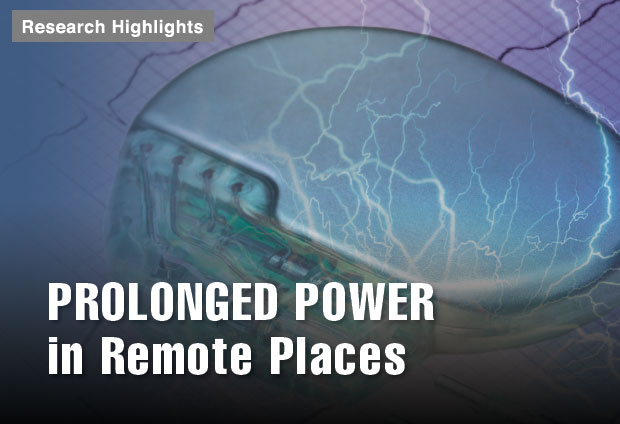 A compact battery that provides long-lasting, reliable power without a tether to an electrical outlet could change the way people use electronics, from personal mobile phones to pacemakers. Three-dimensional (3D) radioisotope batteries—high-density power sources that convert a radioisotope’s radioactive decay directly into electricity—hold promise in devices suited for remote applications, such as unattended sensors, and for biomedical purposes. The development of 3D radioisotope batteries relies on the skill of experts at Lawrence Livermore, whose knowledge of advanced microfabrication, materials science, and nuclear chemistry are propelling the technology forward.

Although radioisotope batteries have existed for decades, they tend to be expensive to produce and have relatively low power levels, which limits their output. To create long-lasting battery options suitable for a broader range of power and lifetime requirements, a Livermore team led by electrical engineer Rebecca Nikolic has demonstrated a two-dimensional (2D) radioisotope battery with properties intended for 3D construction. As part of the research, the team is testing semiconductor materials for radiation hardness—how resistant they are to damage from ionizing radiation. They are also developing radioisotope coatings that emit beta or alpha particles. These particles then deposit energy into the semiconductor material to generate electricity.

The team’s work builds on a previous project, initially funded by Livermore’s Laboratory Directed Research and Development Program, to develop a silicon pillar–based radiation detection device, which contains millions of etched pillars 50 micrometers high and spaced approximately 2 micrometers apart. (See S&TR, March 2014, Tiny Silicon Pillars Can Detect Giant Threats.) “Our team has taken this platform, which took a decade to develop, and is now exploring new applications,” says Nikolic. “We are excited about the possibilities.” The pillar platform is a starting point for developing the 3D radioisotope battery, a device that would have a greater power density than a flat, 2D material because it can house a larger volume of the radioisotope. 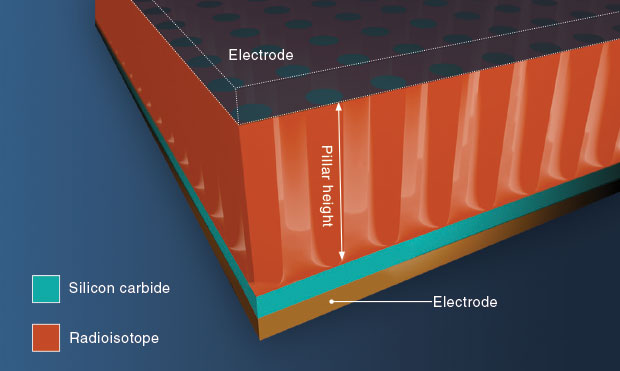 The Livermore-developed three-dimensional radioisotope battery design features pillars made from silicon carbide surrounded by a radioisotope, such as promethium-147.

Radioisotopes can vary in level and type of energy they produce, which correlates with the amount of radiation they emit. They also have different half-lives, a characteristic that dictates how long the radioisotope will generate energy, and thus ultimately determines how long a radioisotope battery will last. Tritium is a low-energy, beta-emitting hydrogen radioisotope that produces less than 10 kiloelectronvolts (keV) of energy per decay. Tritium-based beta-emitting (or beta-voltaic) batteries are the most commonly made radioisotope batteries because they are relatively low power yet long lasting.

Livermore found success developing a higher energy prototype battery using promethium-147, a beta-emitting radioisotope that produces a mean energy of 62 keV. “Leveraging promethium-147 in our batteries has furthered the ability to have a higher power density compared to many other beta-voltaics,” explains Nikolic.

Alpha-emitting (alpha-voltaic) radioisotopes can generate up to approximately 5 megaelectronvolts (MeV) and typically give off about 1,000 times higher power than most beta-emitting ones. However, energy at such levels can damage a crystalline semiconductor and its surrounding electronics. Therefore, alpha-voltaic batteries are sought after for high-power applications, but are difficult to make because the battery materials must withstand large radiation doses.

A second consideration is the semiconductor itself, which captures the radiation, creates the electrical charge, and then transports the charge to an electrode. The Livermore team designed a beta-voltaic battery prototype in which 3D silicon-carbide pillars were surrounded with promethium-147. With this design, the researchers showed that silicon carbide is a viable semiconductor material for the 3D pillar structure of beta-voltaic batteries up to at least 62 keV. However, beta- and alpha-emitting radioisotopes above 1 MeV would destroy the crystal lattice of silicon carbide and other hard materials, presenting a clear need for a radiation-resistant semiconductor. 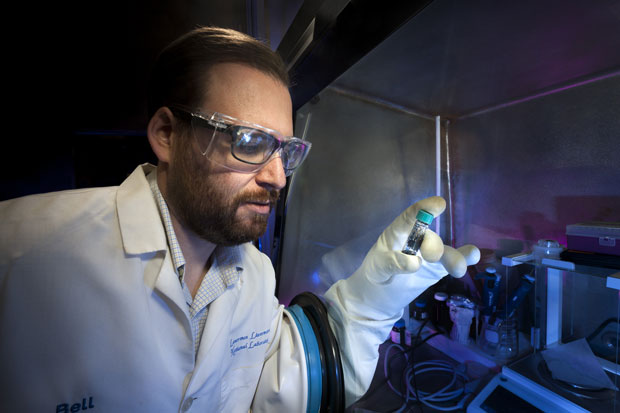 In its liquid form, the semiconducting material selenium is reported to be resistant to radiation damage because liquids have a noncrystalline structure. However, selenium only remains in its liquid form at temperatures above 220 degrees Celsius, high enough to damage the surrounding materials within the battery and the local area. The team found that adding iodine to selenium significantly lowers its melting temperature without inhibiting the semiconductor’s performance­—that is, no change in its performance was observed when transitioning from solid to liquid selenium. For instance, a mixture of equal parts selenium and iodine has a melting point of just 57 degrees Celsius, a more practical temperature for a battery.

The selenium–iodine semiconductor mixture may be radiation hard, making the mixture potentially useful for both low- and high-energy beta- and alpha-voltaic batteries. In a selenium-based battery, the radioisotope could be part of the liquid mixture as opposed to a coating. “Liquid-selenium-based batteries may be impervious to damage,” says Lars Voss, a Laboratory materials scientist. “This finding could be a game changer for radioisotope power sources and enable far higher power densities with far lower radioactivity.”

The team studied how radiation exposure affects the behavior of a radioisotope battery's semiconductor material, both with a solid promethium-147 source up to an electon dose of 1015 and with an electron-beam gun tuned to 62 kiloelectronvolts to simulate higher doses.

A reliable radioisotope battery must be durable. Toward this end, the Livermore team has studied how radiation exposure affects the semiconductor material over time. The most efficient way to perform this task is through accelerated aging techniques—a core competency developed at the Laboratory for stockpile stewardship.

Experiments were conducted using a new electron-beam gun, tunable to the required energy levels of 0 to 100 keV. The source generates a beam of electrons, which act as surrogate beta particles, tunable to the energy level of the radioisotope. As the semiconductor material is irradiated by the beam, the team monitors the material over time to determine its electron dose. These data indicate how long the material can withstand radiation exposure, which correlates with the lifespan of a battery. Using the electron-beam gun, the team can subject the target material to many years’ worth of radiation exposure in just one hour, reducing experiment time and cost. Data from these studies are being used to refine the battery design.

Pumping Up to 3D

The Livermore team has produced promising results for both beta- and alpha-voltaic battery designs. The researchers’ next steps will involve further refining battery properties and applying their findings to the silicon-carbide 3D structure. Additional research efforts will help the team improve its fundamental understanding of liquid semiconductors.

The advent of this radioisotope battery has the potential to benefit other work at Lawrence Livermore, much like its 3D radiation-detection predecessor did. Nikolic says, “When we complete the 3D radioisotope battery, it’s going to find a home in many applications.”