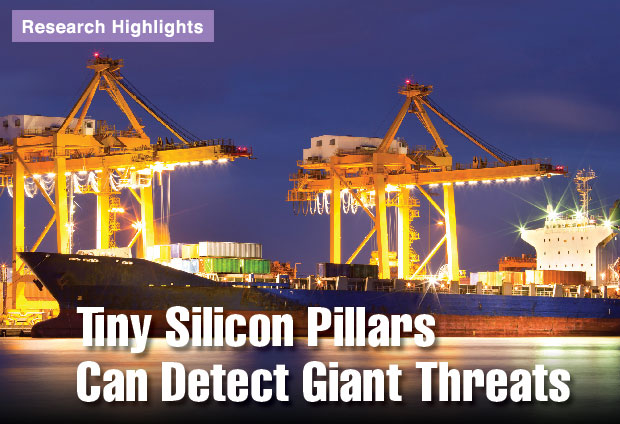 A critical aspect of protecting our borders is detecting the entry of illicit special nuclear materials (uranium and plutonium isotopes). To address concerns about potential smuggling or misuse of nuclear materials, in particular in an improvised nuclear device, the Departments of Homeland Security and Energy are supporting efforts to develop a new generation of instruments for detecting the neutrons that fissile materials continuously emit. These efficient, compact, and modular detectors would, for example, be used to scan air and ship cargoes, investigate suspicious items, monitor spent nuclear fuel, help guard border crossings, and assist in ensuring compliance with arms control treaties.

A Lawrence Livermore research team led by electrical engineer Rebecca Nikolic has demonstrated a miniaturized, solid-state detection system that fulfills the need for a far more efficient and compact neutron detector than existing devices. The instrument, called a pillar detector, uses a detection element as thin as a credit card and manufactured primarily from silicon. Currently in advanced development, the device has demonstrated high efficiency without the many disadvantages of competing designs.

Of particular note, the pillar detector does not rely on increasingly rare helium-3, which current neutron detectors use to absorb thermal (low-energy) neutrons. Instead of helium-3, the pillar detector uses a platform of etched silicon pillars interspersed with boron-10, an enriched boron isotope. Incoming neutrons from fissile materials strike the boron nuclei, yielding both alpha (helium nuclei) and lithium-7 particles. These particles travel a small distance before striking the semiconductor pillars to induce a measurable electrical current. 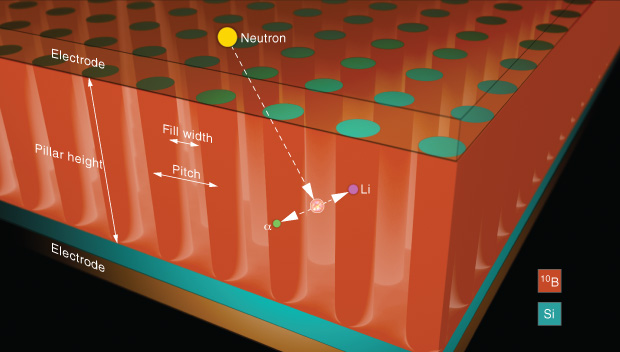 In the Livermore-developed silicon pillar detector, incoming neutrons interact with the boron (10B) “fill” between the pillars. When the resulting charged particles strike the silicon (Si), a signal is generated at the electrodes. Tall, narrow pillars increase the amount of 10B available to detect neutrons. Shorter pillars improve the detector’s robustness, and wider pillars increase the detection of alpha (α) and lithium (Li) particles. The pillar pitch (distance between pillar center points), fill width, and height are optimized for maximum efficiency in a compact, low-voltage package.

Livermore’s pillar detector research effort began in 2005 with funding from the Laboratory Directed Research and Development Program. The Department of Homeland Security’s Domestic Nuclear Detection Office (DNDO) has supported the project since 2008, and the National Nuclear Security Administration’s Office of Nonproliferation Research and Development has supported it since 2012. In addition to Nikolic, team members include Qinghui Shao, Lars Voss, Adam Conway, Catherine Reinhardt, Tim Graff, and Phillip Kerr. Their expertise ranges from nuclear physics to electrical engineering and materials science.

Working at Livermore’s Center for Micro- and Nanotechnologies, the team applied advanced microfabrication techniques pioneered by the semiconductor industry to produce a breakthrough instrument that is both inexpensive to manufacture and low in maintenance. The project is one of many supporting the Laboratory’s nuclear nonproliferation mission.

Nikolic explains that because nuclear materials release both gamma rays and neutrons at different rates, they can be identified by their specific radiation signatures. For high-mass isotopes such as uranium and plutonium, being able to detect thermal neutrons is particularly important. “We need both thermal-neutron and gamma-ray detectors for positive identification of a special nuclear material,” says Nikolic. “However, detecting neutrons alone is a smoking gun. They indicate that special nuclear materials are likely to be present, and we can help to infer the identity of the fissile material from the neutron response.”

When neutrons are first emitted from a nucleus, they are very energetic but quickly slow down after colliding with surrounding materials, especially materials containing hydrogen. These thermal neutrons have an energy level (less than 1 electronvolt) and speed (about 2.2 kilometers per second) similar to that of room-temperature gas molecules and, thus, are more likely than energetic neutrons to be captured by a detector.

Current neutron detectors typically contain pressurized tubes filled with helium-3 gas to capture or absorb thermal neutrons. The tubes typically measure between 25 and 50 millimeters in diameter and up to 1 meter in length. Portable units must be robust, lightweight, efficient, and insensitive to vibrations and gamma rays. They also must be compact enough for handheld operation.

Nikolic notes that the search for a new generation of detectors has acquired some urgency because current supplies of helium-3 are declining rapidly. These supplies derive mainly from the dismantling of nuclear weapons, where the isotope accumulates as tritium decays. Instead of helium-3, the pillar detector’s primary materials are silicon (the mainstay of the electronics industry) and boron-10 (an abundant and easily separated isotope).

In searching for a substitute for helium-3, the team focused on boron-10, which has a large probability of reacting with neutrons. From 2005 to 2008, the team acquired a strong knowledge of the nuclear science of boron-10 as well as the multistep reactions that occur after a neutron strikes the boron, sending particles into the pillars that trigger an electronic signal. 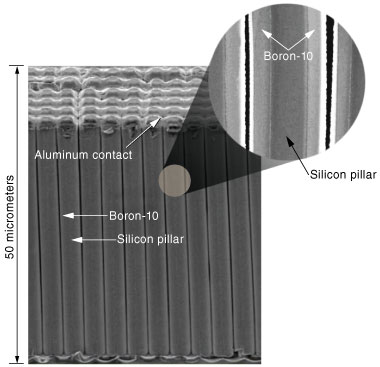 The silicon pillar detector is only centimeters wide and requires less than 5 volts to operate. The detector is made with millions of etched silicon pillars, each measuring 50 micrometers high, and interspersed with boron-10. Both materials are readily available.

The key design feature of the new detector is millions of etched pillars measuring 50 micrometers high and spaced about 2 micrometers apart. The space between the pillars is filled with boron-10 using a low-pressure chemical vapor deposition technique. The three-dimensional structure of the detector and the large amount of boron-10 maximize the capture of neutrons. The pillar height (or etch depth) can be increased to provide a thicker boron layer for capturing even more neutrons. “We can also adjust the spacing between the pillars so the alpha particles don’t have to travel far, which provides higher efficiency,” says Nikolic.

The detector relies not only on advanced manufacturing and assembly techniques but also on software to run the instrument, associated electronics (which are designed in collaboration with Lorenzo Fabris of Oak Ridge National Laboratory), and algorithms that analyze data in real time. The algorithms and hardware used to analyze the data from the pillar detector were originally developed for Livermore’s emergency response efforts by a team of scientists and engineers, including physicist Phillip Kerr. These technologies were incorporated into the Fission Meter, a neutron multiplicity detector based on long-standing helium-3 technology. The Fission Meter is now licensed to Ortec, Inc.

In 2013, a 16-channel (16-detector-element) design of the pillar detector successfully identified californium-252, a standard thermal-neutron source used to calibrate detectors. The detector measured the mass to 1-percent accuracy. The unit’s detection area of just 10 square centimeters completed the measurement in 18 hours, an eightfold improvement over a smaller prototype from a year prior. The team expects to achieve a less than 2-hour measurement time with a larger detector area by combining many individual detectors into an integrated, multichannel system. The next generation of the pillar detector features 64 detector elements, each 1 centimeter square, for an overall dimension of 8 by 8 centimeters (64 square centimeters).

The researchers also tested the pillar detector with cesium-137, a strong gamma-ray emitter. The neutron–gamma-ray rejection ratio was measured from 106 to 108, which confirmed that the design does not confuse gamma rays with neutrons. Says physicist Steve Payne, “Importantly, the pillar detector is inherently insensitive to gamma rays and typically meets this requirement because its active region is very thin, only about 50 micrometers.” 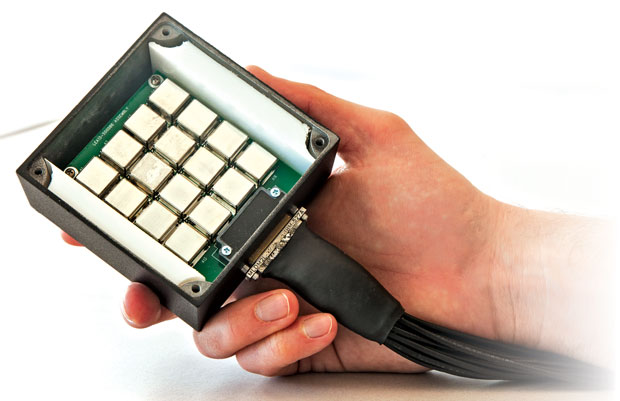 In 2013, as part of a project for the Department of Homeland Security, Livermore researchers successfully demonstrated a pillar detector with 16 channels (16 detector elements), providing a detection area of 10 square centimeters.

The next-generation pillar detector will feature 64 detector elements, each measuring 1 centimeter square, for a total area of 64 square centimeters.

Applications from the Lab to the Field

Because the pillar detector design is modular, an instrument of virtually any size can be manufactured to meet the needs of different users. For example, a very small detector can be built for handheld applications, or many elements can be “tiled” to cover large areas. In stacking the detectors, one can achieve closer to 100-percent efficiency.

Potential applications range from the analytical laboratory to military, homeland security, and medical applications in the field. An immediate use would be for luggage and cargo container inspections at airports, seaports, and border crossings. Pillar detectors could find important roles in counterterrorism and arms control and safeguards.

Nikolic expects the pillar detector to be licensed to a private firm. The team already holds several patents for the fabrication technology embodied in the device, and a few companies have expressed interest in the instrument. Nikolic anticipates additional interest from industry as the team demonstrates increasingly larger detector areas while decreasing the size of electronic signal processors.

The team is collaborating with researchers from Rensselaer Polytechnic Institute to refine the technique of depositing boron-10. In addition, the team is working on multiplexing (combining many electrical signals into one) the numerous small panels and miniaturizing the associated electronics to make possible a truly fieldable instrument.

Within a few years, Nikolic expects the detector to be performing double-duty in both radiation detection for counterterrorism and contamination control as it replaces far bulkier and less efficient detectors based on helium-3 in environments ranging from airports to particle accelerators. At the very least, the nation’s borders will be more secure, thanks to an exquisitely manufactured tiny device.

Work partially supported by the U.S. Department of Homeland Security, Domestic Nuclear Detection Office, under competitively awarded IAA HSHQDC-08-X-00874. This support does not constitute an express or implied endorsement on the part of the government.