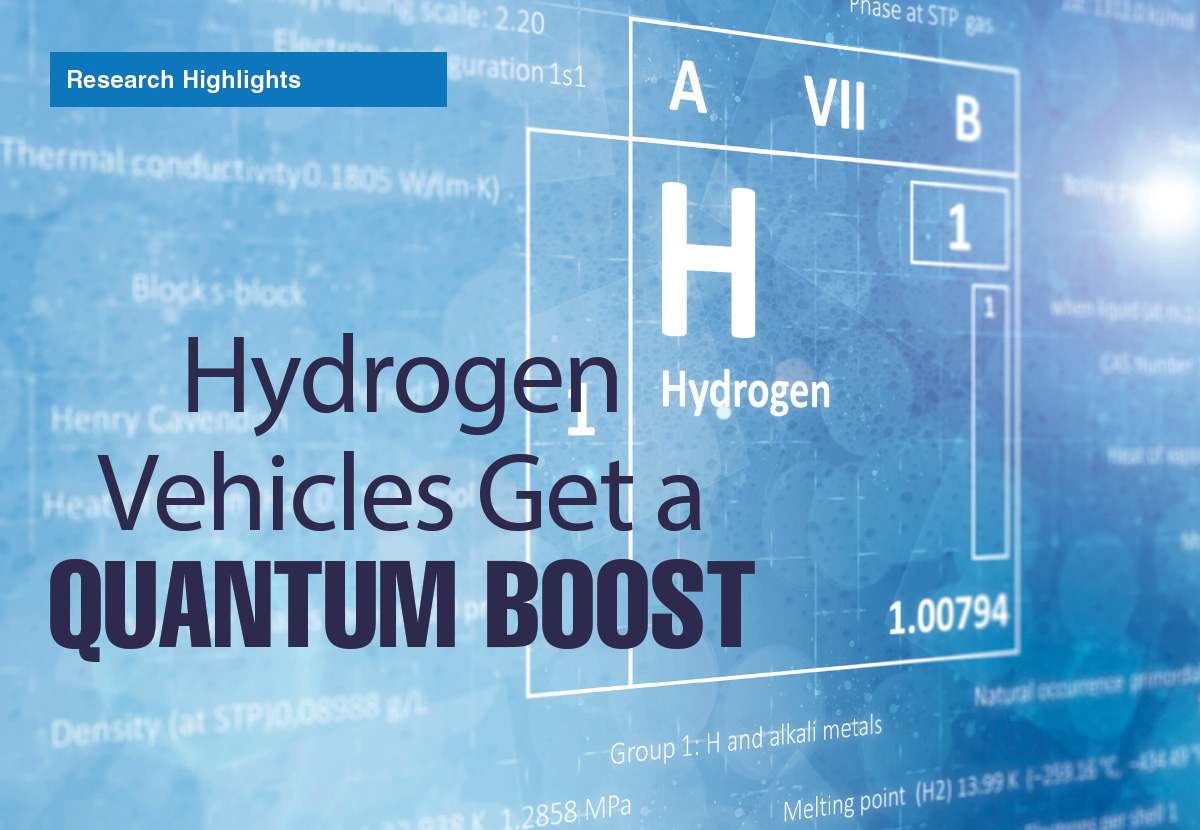 Hydrogen Vehicles Get a Quantum Boost

HYDROGEN fuel cell electric vehicles are a clean and potentially sustainable form of transportation. However, researchers must overcome significant technological and economic challenges before these vehicles become a practical alternative to gasoline-powered cars. Funded by the Department of Energy’s Office of Fuel Cell Technology, Lawrence Livermore is addressing some of the challenges facing hydrogen vehicles.

Sal Aceves, a Livermore mechanical engineer and the project’s principal investigator, says, “Although battery electric vehicles have the advantage of more infrastructure, hydrogen has certain advantages too, especially for large vehicles where heavy batteries are a limitation. A hydrogen vehicle can refuel in about five minutes, and hydrogen fuel tanks are cheaper and lighter than batteries.”

Seeking technologies that could make hydrogen fuel cell electric vehicles (FCEVs) more practical, Lawrence Livermore researchers developed and tested a fuel tank designed to fit into personal vehicles, and a high-pressure process to refuel FCEVs quickly (S&TR September 2016, Facility Drives Hydrogen Vehicle Innovations). The thermally insulated tank stores the hydrogen fuel as a liquid or cryogenic fluid under high pressure at low temperature. Much more hydrogen can be stored in a tank at low temperature compared to a gas at ambient temperature, substantially increasing the range of a hydrogen-powered vehicle.

A fundamental quantum mechanical property of cryogenic hydrogen (H2) gives drivers of H2-powered vehicles an added range boost, according to studies performed by Lawrence Livermore researchers and colleagues. The effect, called para- to ortho-hydrogen (H2) conversion, increases the storage capacity of cryogenic H2 tanks. To confirm the magnitude of the effect, the researchers had to calculate first-of-their-kind quantum mechanical properties based on measurements of samples from an automotive fuel tank-sized volume of hydrogen. The para- to ortho–H2 conversion is a rare example of a phenomenon from quantum mechanics having an impact on a mechanical engineering problem at the scale of everyday life.

In ortho-hydrogen (ortho-H2), the two protons of the hydrogen molecule are spinning in the same direction. In para-H2, they spin in opposite directions.

The tests demonstrated that the cryogenic tank could keep cryogenic H2 at high pressure with no hydrogen venting under all but the most extreme driving conditions. Fuel is most likely to vent while the tank sits idle and gets warmer, wasting fuel and reducing fuel economy. After these tests, the research team decided to investigate the para- to ortho-H2 conversion when they suspected that the effect had a materially positive impact on the tank’s ability to store H2. 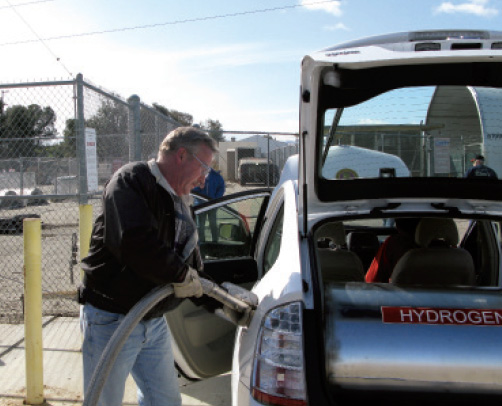 Elementary particles like protons and electrons possess a property called “spin.” Molecular hydrogen consists of two protons and two electrons, any of which can exist in an up or down state (sometimes referred to as clockwise or counterclockwise spin from classical mechanics, as defined by looking down on the axis of the particle). When the two protons in molecular hydrogen possess opposite spin states, the molecule is called para-H2. When they possess spin in the same state, it is known as ortho-H2. These are known as the spin isomers of hydrogen. Ortho-H2 exists in a quantum-mechanical state that has higher energy than para-H2.

At room temperature and higher, the equilibrium mass of hydrogen is about 75 percent ortho-H2 and 25 percent para-H2. As the temperature drops, the abundance of para-H2 molecules increases and heat capacity decreases. At about the liquefaction temperature of air, 77 kelvins (K), the number of para- and ortho-H2 molecules is about equal, and the transition continues as the temperature drops lower. H2 liquifies at a chilling 20.3 K. At this temperature, it exists as greater than 99.7 percent) as para-H2. Moving in the opposite direction, as para-H2 absorbs heat from the environment and becomes a gas, it converts back to a predominantly ortho-H2 form. 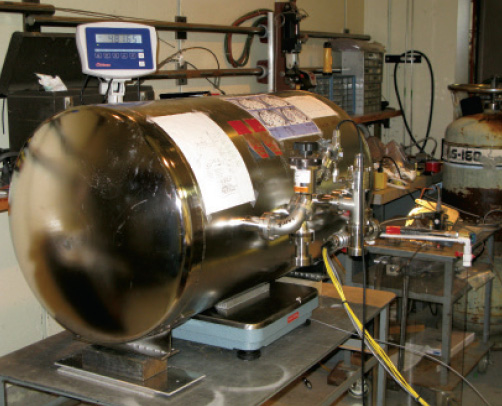 “This is good for the car,” says Aceves, “because you have to worry about what happens to the pressure in the tank as H2 heats up.” When the car is not in use, its hydrogen tank slowly heats up due to heat transfer from the environment, and the hydrogen pressure within the tank increases. When the pressure gets too high, some of the hydrogen must be vented to prevent damage to the tank. The para–ortho conversion absorbs energy, which uses some of the thermal energy in the tank that would otherwise contribute to increasing the hydrogen pressure. This keeps the tank cold and delays the onset of venting. The time interval until venting is defined as the tank’s dormancy period.

To measure the magnitude of the para–ortho effect, Aceves, Guillaume Petitpas (now at Air Liquide, France), Ibo Matthews, and Ray Smith conducted 15 experiments in which they filled the cryogenic tank with H2 at different densities. To determine how much of the hydrogen existed in para- and ortho- states at varying conditions, Aceves turned to Matthews to apply Raman spectroscopy to the problem. 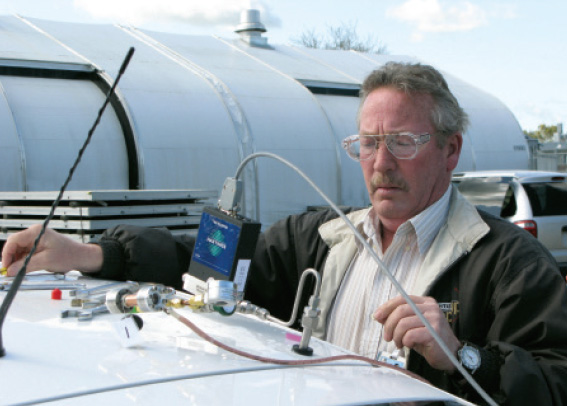 Tim Ross draws a sample of hydrogen from an in-vehicle cryogenic fuel tank. The sample will be taken to Livermore’s Raman spectroscopy lab to measure the ratio of para- to ortho-hydrogen.

Raman spectroscopy can measure the vibrational modes of solids and molecules as well as the rotational modes of gaseous molecules. Rotational Raman spectroscopy provides information about rotational populations of molecules which, for certain molecules like H2, can be related to their nuclear spin states. Matthews first established his optical spectroscopy lab at Livermore with a focus on studying National Ignition Facility (NIF)-related optics and targets using Raman and photoluminescence spectroscopies. Later, the lab scope was expanded to include techniques that allow NIF staff to find, understand, and repair laser-induced damage (S&TR April/May 2017, Looking for Trouble on Optical Surfaces). He and his NIF colleagues are now working to develop commercial applications for this optical repair technology and push the boundaries of other laser material-processing techniques such as laser-based additive manufacturing. “Sal came to me asking whether we could use Raman spectroscopy to reliably and accurately measure differences in para- and ortho-H2 concentration. We came up with a plan to do time-dependent experiments to determine the reaction kinetics that drive how the para/ortho ratio was changing in these vessels,” says Matthews.

During each experiment, the research team drew a sample from the tank at the Laboratory’s Cryogenic Hydrogen Test Facility every day and rushed it over to Matthews’ lab to measure the fraction of para-H2 in the sample. These were the first such measurements of para- and ortho-H2 sampled from large tanks. Prior investigators took measurements from much smaller volumes of hydrogen under less relevant conditions for hydrogen vehicles. 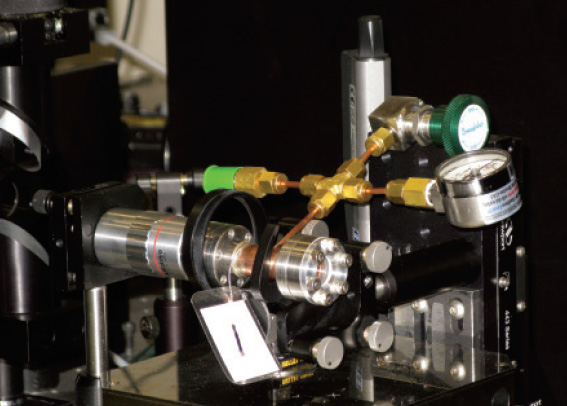 The Raman spectroscopy apparatus. The sample container is visible in the center-right as a pair of brass-colored crossed pipes with a green knob.

The Livermore team discovered that para–ortho H2 conversion usually became active after 10 to 15 days of parking, when the internal tank temperature reached 70 to 80 K. The conversion approached completion after 25 to 30 days when the vessel reached 100 to 120 K at a density of 50 grams per liter. The practical consequence of their finding is that vessel dormancy, the time the vessel can absorb heat from the environment before venting fuel to the environment, increased by three to seven days as a result of the conversion effect. It also means that the tank has greater capacity than expected as it warms.

In addition to its practical implications, the research also had a basic-science impact. The team’s conversion measurements differed from the different diagnostic technique used in an earlier Ukrainian study, which found that the para–ortho conversion rate increased with increasing temperature. The Livermore measurements showed a slight decrease in conversion rate with temperature. This is consistent with a theory of paramagnetism proposed in 1933 by distinguished physicist Eugene Wigner, providing a quantum mechanics-based explanation for the conversion. 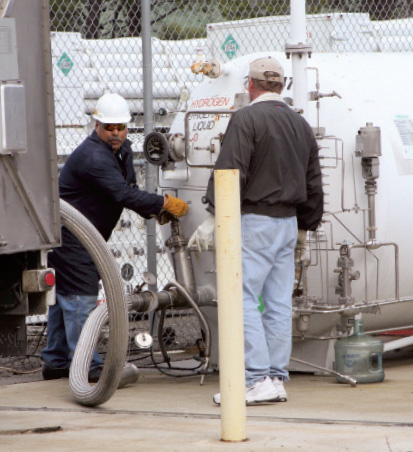 In a follow-up study, Aceves and Livermore, University of Guanajuato, and Worthington Industries colleagues modeled all of the factors affecting cryogenic tank fill density to evaluate the performance of a hydrogen vehicle. The team modeled the effects of average daily driving distance on hydrogen density in the tank under different scenarios, such as driving distances ranging from 10 to 80 kilometers per day with and without refueling.

They found that the fill density of hydrogen gas in the tank increases linearly with driving distance. In consequence, increased driving distance depletes the fuel more rapidly, reducing the time available for heat transfer and leading to colder vessels that fill to higher density. Frequently driven vehicles need more tank capacity for hydrogen refueling. The tanks in these vehicles are refueled more frequently, are colder (they have had less time to heat up), and therefore can be filled with more hydrogen at a higher density. A side benefit is that at cold temperatures, the walls of the stainless steel vessels grow stronger and stiffer, increasing the safety of the tanks.

The results also show that the para- to ortho-H2 conversion is responsible for a significant increase in fill density, up to 5.3 percent. The conversion is most active for vehicles driven 20 to 60 kilometers per day—about the average distance traveled per day of most passenger cars. By managing the conversion process, hydrogen FCEVs will be more effective for the average driver thanks to quantum mechanics. “As a mechanical engineer, I feel bad that we don’t usually get to join in the fun of quantum mechanics,” says Aceves. “Here for a change, is one effect where we mechanical engineers can work on a quantum-mechanical phenomenon that has an impact on daily life.”