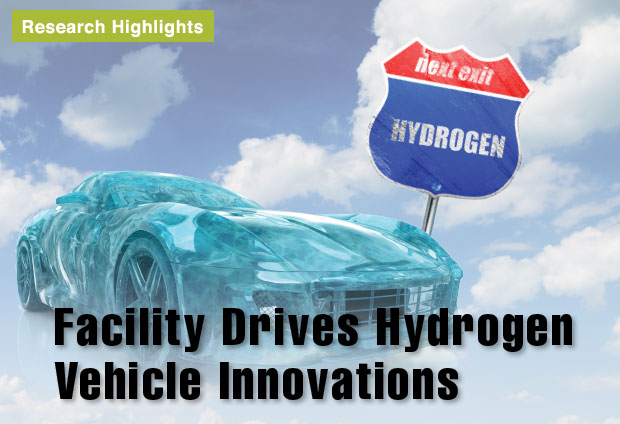 As demand for limited fossil fuels grows, so does the need for viable alternatives to their use. In particular, researchers are working hard to replace these resources in transportation vehicles, which account for 70 percent of worldwide petroleum consumption. Lawrence Livermore scientists have been at the forefront of research for nearly two decades on one of the most promising long-term solutions: hydrogen.

Offering several advantages over fossil fuels, hydrogen is in limitless supply and has potential for pollution-free, high-efficiency use in fuel cells. However, the gas is difficult to store compactly, making today’s hydrogen-powered vehicles costly and limited in their driving range. With funding from the Department of Energy’s Fuel Cell Technologies Office, a Livermore team is using the Laboratory’s new Cryogenic Hydrogen Test Facility to improve hydrogen storage and delivery. Through their efforts, the researchers aim to help make hydrogen-powered vehicles that meet customer expectations for range, cost, passenger and cargo space, and refueling time a reality.

Hydrogen gas becomes liquid at low temperatures, around 20 kelvins. Liquid hydrogen is 60 percent denser than its compressed-gas counterpart, which could make it feasible for compact, high-energy-density storage. But liquid hydrogen is extremely volatile, rapidly vaporizing and increasing pressure because of heat transfer from the environment. Therefore, liquid-hydrogen tanks must have a safety valve to vent excess gas when it pressurizes beyond the vessel’s limit. Even in well-insulated tanks, hydrogen venting is common and could fully deplete the supply.

Previous hydrogen research conducted at Livermore demonstrated that increasing liquid hydrogen’s containment pressure kept fuel storage compact and eliminated venting under all but the most extreme conditions. (See S&TR, June 2007, Setting a World Driving Record with Hydrogen.) “This work was key in achieving high-density storage without fuel losses,” says Salvador Aceves, the program leader for Livermore Hydrogen Technologies. However, such cryogenic liquid-hydrogen tanks are not yet commercially available.

While several automobile brands have compressed-gas hydrogen vehicles on the market, the technology’s widespread adoption is limited by high vehicle cost and the scarcity of fueling stations. The United States has approximately 50 hydrogen fueling stations, 20 of which are located in California, and the number is anticipated to increase to 100 stations within the next few years. Many filling stations store hydrogen in its liquid form, but dispense it as a cooled, compressed gas by evaporating the liquid and pressurizing it in a series of compressors. Although inefficient and expensive, this method is necessary to facilitate hydrogen distribution and storage at the station.

At Livermore’s Cryogenic Hydrogen Test Facility, researchers are evaluating the feasibility of eliminating many of these steps by directly pressurizing liquid hydrogen in a pump. Manufactured by Munich-based Linde Corporation, the pump takes low-pressure (0.3 MPa) liquid hydrogen from an insulated vessel called a dewar and pressurizes it to the vehicle’s vessel pressure (up to 87.5 MPa) before dispensing. Because pressurizing liquid is more thermodynamically efficient than pressurizing gas, the pump delivers a continuous stream of high-pressure cryogenic hydrogen while considerably reducing electricity consumption at the station. What’s more, the pumping equipment occupies a smaller footprint and is easier to maintain.

The new liquid-pumping process offers two main advantages for the consumer. First, a relatively small piston pump can deliver 100 kilograms of liquid hydrogen per hour. As a result, refueling time is reduced to just five minutes per vehicle. The increase in pumping efficiency also benefits the station owner as more vehicles can be serviced in less time and the overall pump cost per vehicle is lower. The second advantage to consumers is increased vehicle range. Unlike water, which can be highly pressurized without significantly increasing its density, liquid hydrogen becomes considerably denser when pressurized. The research team, which includes Livermore engineers Guillaume Petitpas, Francisco Espinosa-Loza, and Nick Killingsworth as well as high-pressure technicians Rick Buskey and Vernon Switzer, expects to fill a high-pressure vessel to 80 grams per liter (double the density of today’s compressed-gas tanks) from a 65-grams-per-liter dewar. This increase in hydrogen density offers the potential for longer vehicle driving range when compared to vehicles with conventional compressed hydrogen.

The pumping station at the Cryogenic Hydrogen Test Facility currently refuels vehicles with the highest density molecular hydrogen in the Western Hemisphere. Aceves says, “Higher density hydrogen can only be found in minute amounts in physics laboratories, including in the tiny capsules of compressed hydrogen produced at Lawrence Livermore’s National Ignition Facility.”

After researching several key parts of the hydrogen fueling process, the team turned its attention to improving on-board vehicular storage vessels. Livermore, in partnership with Spencer Composites and BMW, has designed and built several prototypes. To test these prototypes safely, the research team uses another critical component of the Cryogenic Hydrogen Test Facility—the remotely controlled and monitored stainless-steel containment unit. More than 3 centimeters thick and weighing almost 5 metric tons, the test vessel can contain the equivalent energy of 1.8 kilograms of TNT, making it possible to test full-scale vessels and hydrogen systems safely.

The containment unit is used to repeatedly test prototype hydrogen storage vessels with pumped cryogenic hydrogen to see how they perform. As part of these experiments, the team continuously fills and empties prototype vessels to simulate a lifetime of wear. Test results are then analyzed to assess the prototype’s strengths and weaknesses.

The team is starting to test high-pressure vessels with ultrathin liners with the goal of producing a commercial vessel with greater volumetric efficiency, that is, how much of the vessel is available for storing hydrogen. Current vehicle vessels achieve approximately 70-percent volumetric efficiency. The team aims to achieve 81 percent. The extremely thin liners reduce vessel-wall thickness, leaving more space for hydrogen and leading to increased vessel storage capacity and longer vehicle driving range. 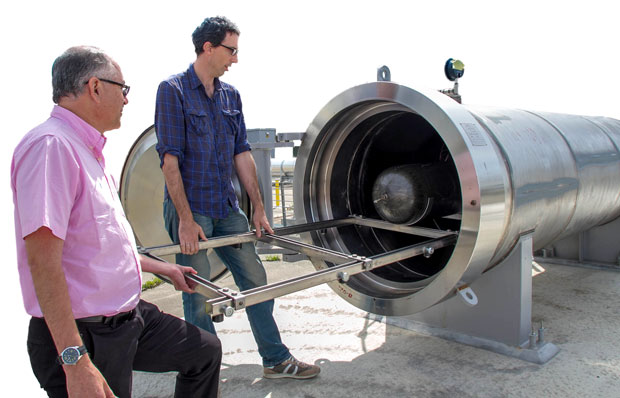 The Future of the Hydrogen Highway

Today, car manufacturers such as Toyota, Honda, Hyundai, and Mercedes-Benz are actively commercializing vehicles powered by hydrogen fuel cells. Furthermore, several of the San Francisco Bay Area’s Alameda–Contra Costa counties transit buses are hydrogen fuel-cell vehicles with a range of 355 kilometers per fill. In 2015, one of these buses achieved 20,000 hours of continuous operation, about four times longer than expected. In California, the 2016 Toyota Mirai—a hydrogen fuel-cell vehicle—sells for approximately $57,000. To make the price of hydrogen vehicles more competitive will require an increase in consumer demand, but the lack of fueling infrastructure is keeping the market small.

“The improvements we are making to the pumping process and our research into complementary storage vessels could potentially lower cost and improve performance,” says Petitpas. “However, big changes are needed across many areas, and these advancements will take some time—we need more testing, more charging stations, and improvements to other capabilities…but we are getting there.”

The work done by Aceves and the team directly supports an agreement from the 21st Conference of the Parties, or COP21, held in Paris. COP is the decision-making body of the United Nations Framework Convention on Climate Change. “Through our efforts, we are enabling practical, long-range hydrogen vehicles that can help reduce climate-changing carbon-dioxide emissions,” says Aceves. In addition, recent progress on hydrogen technology will be highlighted at the National Hydrogen and Fuel Cell Day, celebrated annually on October 8. “This event is a great opportunity to increase awareness of current developments in the area of hydrogen technologies, including research organizations, refueling infrastructure, and commercially available vehicles.”