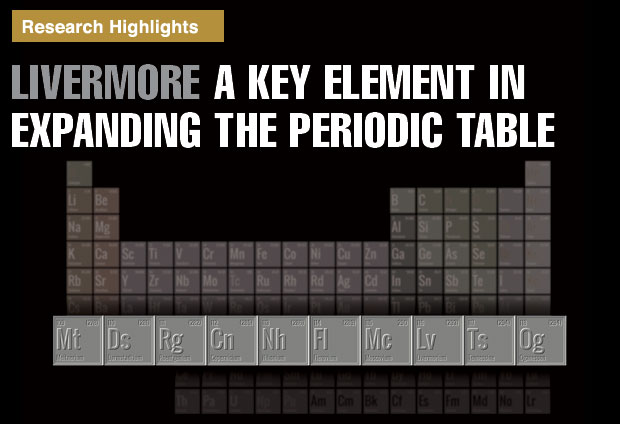 The periodic table of elements celebrated its 150th anniversary in 2019. Elements 109–118 are the most recent additions to the table. Several of these superheavy elements were discovered by multi-institutional teams that include researchers from Lawrence Livermore.

Livermore: A Key Element in Expanding the Periodic Table

This year, scientists across the world are celebrating the 150th anniversary of the periodic table. Invented by the Russian chemistry professor Dmitri Mendeleev in 1869, this chart organized the 63 known elements by their atomic mass and chemical characteristics and interactions. In doing so, Mendeleev illustrated that the elements exhibited similar properties at regular intervals (periods) when organized by weight, and that this information could be used to predict the existence and properties of as-yet-undiscovered elements. To honor Mendeleev’s achievement, the United Nations Educational, Scientific, and Cultural Organization (UNESCO) proclaimed 2019 the international year of the periodic table.

Since the Laboratory’s inception in 1952, Lawrence Livermore researchers have participated in the quest to understand—and discover—new elements, both as a fundamental science challenge and to hone skills for work related to its core national security mission. “The study of superheavy elements (those with high atomic numbers and correspondingly large proton counts) allows us to understand the complex interactions between neutrons and protons in the nucleus and the forces that hold a nucleus together and force it apart,” notes nuclear chemist Mark Stoyer. “The heaviest nuclei provide a unique laboratory for testing and probing the nature of matter—what makes some matter stable and other matter unstable.” Of the 118 elements found on the most recent periodic table, 90 exist naturally on Earth. The remaining 28 elements—which are characterized as either heavy or superheavy—must be synthesized.

Element discovery is a team enterprise, given the immensity of the task and the specialized tools and materials required, such as accelerators and difficult-to-obtain targets. Often, dozens of scientists across multiple institutions and countries are involved. For Lawrence Livermore researchers, these collaborations have proven both enduring and rewarding. Sonia Létant, deputy associate director for Science and Technology in the Physical and Life Sciences Directorate, says, “More than anything else, teamwork is at the heart of heavy element discoveries and deeply ingrained in our Laboratory’s culture.” Exploration of superheavy elements continues at Livermore today, largely with support from the Laboratory Directed Research and Development (LDRD) Program.

Following a fruitful three-decade collaboration with Lawrence Berkeley Laboratory (now Lawrence Berkeley National Laboratory) to discover new elements, Livermore embarked on a more unexpected alliance with the Flerov Laboratory of Nuclear Reactions (FLNR) in Dubna, Russia, in 1989. Previously stymied by Cold War politics, the collaboration was a turning point, built on complementary assets—FLNR’s particle accelerator and Livermore’s detector technology and data collection and analysis expertise—plus a mutual interest in finding more stable and longer-lived (and thus easier to study) superheavy elements. Until then, the field had been highly competitive, with Russian and U.S. researchers both staking claim to elements 104 and 105, a dispute ultimately settled in the 1990s. 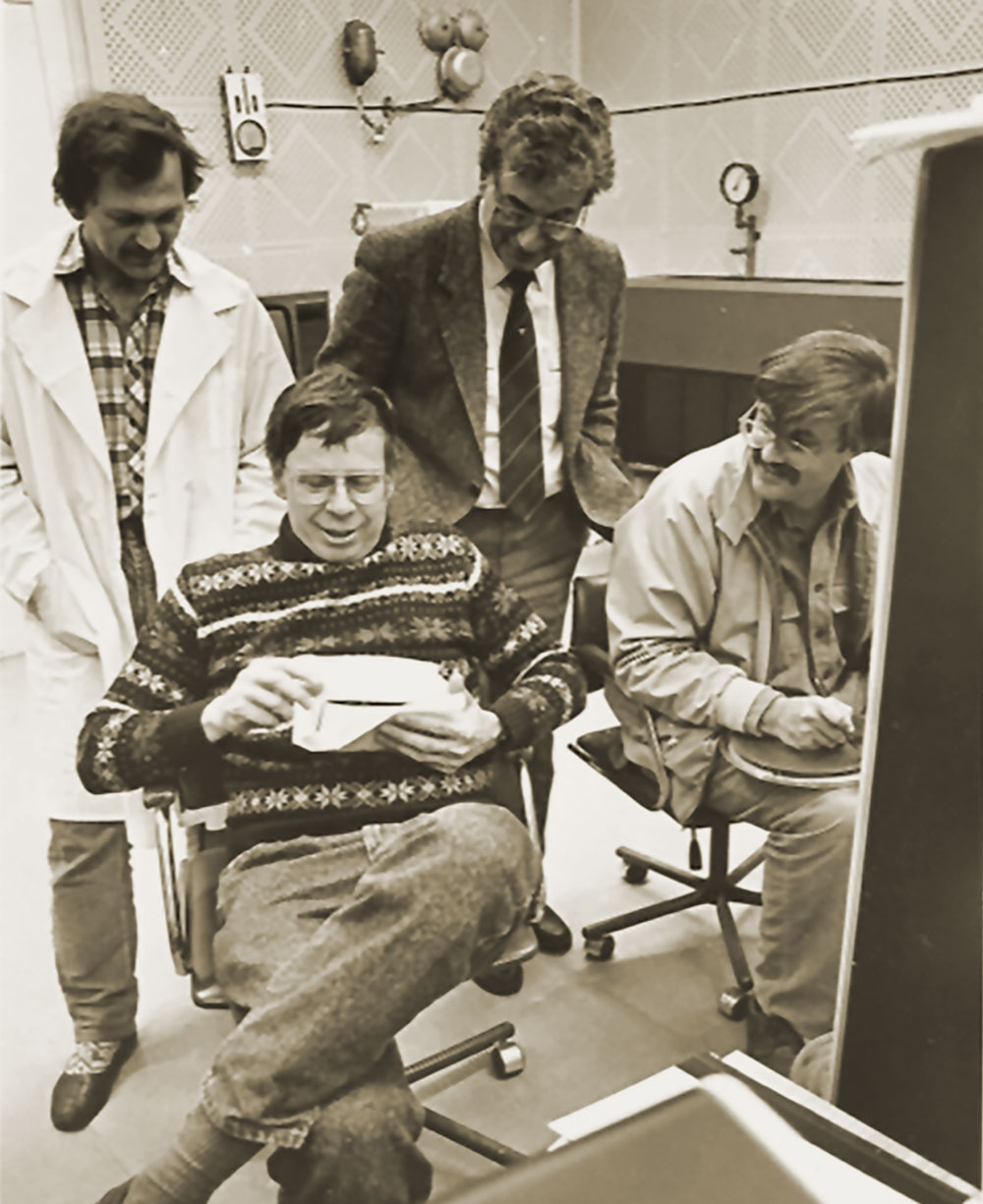 Scientists from Lawrence Livermore and the Flerov Laboratory of Nuclear Reactions (FLNR) conducted research together for the first time in the late 1980s. (clockwise, from back left) FLNR’s Vladimir Utyonkov and Yuri Oganessian are shown meeting with Livermore’s Ken Moody and Ron Lougheed in 1989.

Scientists create new elements through high-energy collisions that force positively charged atomic nuclei to fuse. In these experiments, large quantities of an element with a low atomic number are accelerated to roughly 10 percent of light speed and directed at a heavy element target. For example, in 1974, researchers from Lawrence Livermore and Lawrence Berkeley made seaborgium (element 106) by bombarding a californium target with a beam of “lighter” oxygen ions. Determining optimal collision speed is crucial: nuclei spring apart with too little energy and destroy each other with too much.

To make new elements, the Livermore–FLNR team accelerated large quantities of an element with a low atomic number in a cyclotron—a spiral-shaped accelerator—and then directed the stream of energetic particles at a heavy element target. Particles of interest were separated from unreacted or waste particles using a series of magnets. Their radioactive decays were then recorded by a detector for analysis. (Illustration by Jacob Long.)

Livermore’s use of independent data analysis to verify each claim—essential in high-stakes, high-profile research—was key to the collaboration. FLNR and Livermore analysts each developed their own search algorithms and reviewed data separately during experiments, sharing findings at regular intervals. (See S&TR, September 2016, Nuclear Data Moves into the 21st Century; and January/February 2002, Present at the Creation.) Regarding the scale of data analysis, Livermore nuclear chemist Roger Henderson explains, “The process is comparable to looking for one grain of sand on an entire beach. We end up collecting a terabyte or so of data, but we only see a handful of ‘real’ events.”

The researchers employed several strategies to narrow down results for evidence of a new element. They looked backward from fission events, as fission (when an atom splits into two stable parts) is the most common way for nuclear decay chains to end. Scientists could focus on identifying spatially constrained decay chains ending in fission because detectors record event location and time, and because many daughter products of heavy elements are too heavy to travel far between decays. (See S&TR, April 2007, A New Block on the Periodic Table.) In cases where they could not determine where the decay chain might end before new signals obscured the results, the researchers instead had to examine each signal that was detected to see if it had the characteristics they were looking for, which meant combing through many more results. The Livermore‒FLNR team and collaborators have officially completed the periodic table’s seventh row, by co-discovering flerovium (element 114), moscovium (115), livermorium (116), tennessine (117), and oganesson (118). Each element’s name reflects people and places important to the research. Although Lawrence Livermore has begun new collaborations with Lawrence Berkeley, Germany’s GSI Helmholtz Centre, and other institutions, Livermore’s connection with FLNR remains strong. “The friendships developed with our Russian colleagues were surprising and welcome—friendships that still exist,” says Stoyer. “Our work together has been going strong for 30 years, which is highly unusual in scientific collaborations.” 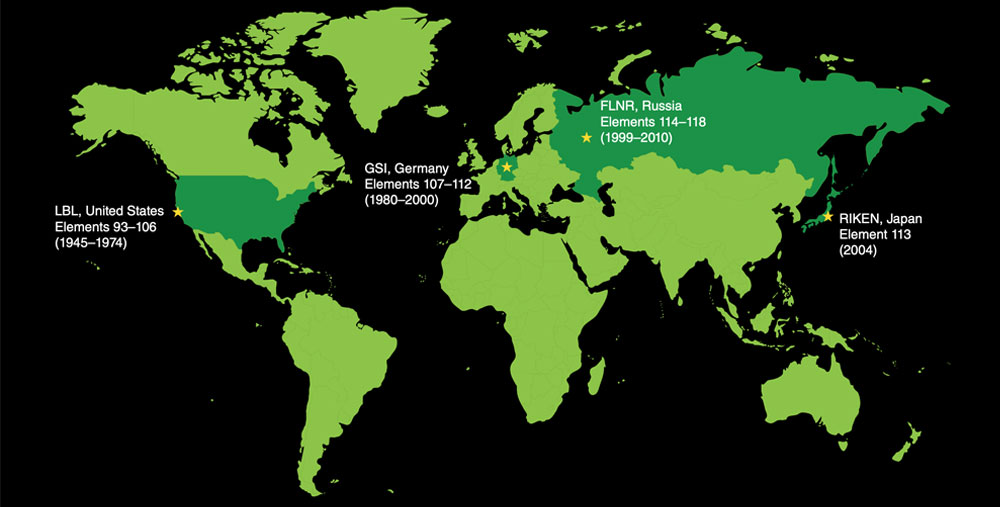 Although the thirst for new element discovery has not waned, the challenge has grown. Technological advancements may be needed for further discoveries, including more intense accelerators, new light-element beams, and faster detectors and electronics. To find ever-heavier new elements, scientists must force more protons into the nucleus, increasing the risk of failure. Researchers compensate by choosing isotopes with many more neutrons than protons so the newly fused nucleus can stabilize by shedding extra neutrons. Notes Henderson, “We used calcium-48 (a rare isotope containing 20 protons and 28 neutrons) beams for many of the element-creation experiments in the 1990s and early 2000s. It is a ‘doubly magic’ projectile—that is, the shells of both the protons and neutrons in the nucleus are filled, so the nucleus is inherently more stable than nearby isotopes.” However, a stream of 1018 calcium nuclei has only netted scientists between 0 and 20 atoms of the desired element.

Livermore researchers have participated in two attempts to make element 120: one with GSI involving curium and chromium, and the other with FLNR to refine a new iron-beam technique because no target element would pair with calcium. “Unlike calcium-48, iron-58 has no magic numbers, so the projectile is ‘hotter.’ The extra energy shows up as extra excitation in the compound nucleus, so the probability of the nucleus falling apart is much higher,” says Henderson.

Understanding the chemical properties of the newest elements, and where they ought to be placed in the periodic table, is an ongoing area of interest for Livermore researchers.As they examine single atoms that decay within seconds or fractions of a second, they need extremely rapid, reliable, and precise experimental approaches—an area nuclear chemist John Despotopulos has been exploring, with LDRD funding. Chemical automation methods, such as those being developed by Despotopulos and colleagues, could support heavy element research along with other rapid chemical analysis needs, such as field-based nuclear forensics. For now, scientists must infer an element’s chemical behavior from homologs—related elements that are longer lived and more common.

The next new element discovery will begin the eighth row on the periodic table. Electrons for these elements will travel at nearly light speed, so fast that elements may no longer follow period trends because of the electrons’ effects on physical and chemical properties. This phenomenon may already be happening with some seventh-period elements. Flerovium, for example, should share properties with lead, based on its periodic table placement, but studies suggest that the short-lived element may behave more like a gas than a metal. (See S&TR, March 2014, Radiochemistry Renaissance.)

Livermore’s contributions to the periodic table could help inspire young people to explore careers in chemistry. “The discovery of a new element has the potential to capture the public’s imagination, just like walking on the moon or driving probes on Mars,” says Stoyer. “The periodic table is something everyone studies in school and can potentially relate to, as it describes the fundamental building blocks of our universe.”