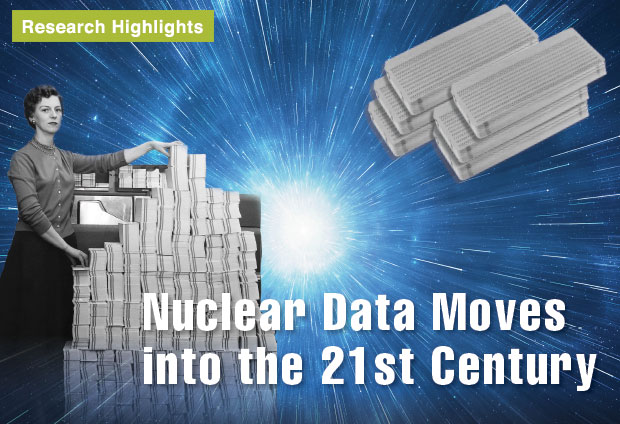 When atomic nuclei collide with other nuclei or subatomic particles, a large number of reactions can occur, resulting in many possible products. High-quality data describing these nuclear reactions are essential for many important scientific, engineering, and commercial applications. These applications include nuclear reactor design and safety, radioactive waste disposal, stockpile stewardship of nuclear weapons, medical radioisotope therapy and diagnostics, fusion energy experiments, astrophysics, nuclear forensics, and more. At Lawrence Livermore, accurate and complete nuclear data are critical for both theoretical and experimental research.

Despite the importance of nuclear data to so many fields, the format for storing, evaluating, and using these data goes back to the 1960s, when computing was based on 80-column punch cards—small, stiff sheets of paper that contain information represented by the presence or absence of holes in predefined positions. As a result, existing formats, principally Livermore’s Evaluated Nuclear Data Library (ENDL) and the widely adopted Evaluated Nuclear Data Format (currently in version 6, or ENDF‑6), are badly outdated. In response to the long-recognized need for modernization, the Nuclear Data and Theory group at Lawrence Livermore has developed a far more capable and flexible format called Generalized Nuclear Data (GND), which takes advantage of many recent advances in computer technology. GND is readable by both computers and humans, flexible, and extensible for supporting new types of nuclear data.

Livermore physicist Bret Beck, who leads the group responsible for the update, explains that the nuclear data tables in either the ENDL or ENDF-6 format describe the probabilities of various complex physical interactions, for example, the collision of neutrons with nuclei. Nuclear databases include physical quantities such as energy spectra, scattering cross sections, nuclear structure, nuclear decay, and angular distributions of the reaction products, together with estimates of uncertainties. ENDL alone includes all stable isotopes and many unstable isotopes for every element in the periodic table up to californium.

To be accepted into nuclear data libraries, scientists must first conduct formal evaluations of the data to ensure they are complete. Evaluations define data over a broad range of energies (usually 10-11 to 20 megaelectronvolts for incident neutrons), even when no measured data exist. Many nuclear decay mechanisms remain poorly understood because some of their products, namely neutrons and neutrinos, are difficult to track. Also, nuclear reactions involving short-lived nuclei are difficult to measure. Nevertheless, evaluators must do their best to combine experimental data with nuclear models to extend or interpolate the available information for incorporation into the data libraries. Without these formal evaluations, nuclear simulations and calculations would be impossible or unreliable.

Evaluation work is done under the auspices of national and international agencies, including the Cross-Section Evaluation Working Group, which controls the United States’ ENDF/B data library and the ENDF-6 format. Its work is coordinated through the National Nuclear Data Center (NNDC) at Brookhaven National Laboratory. Although the Japanese and European nuclear communities have adopted ENDF-6 for their own nuclear data libraries, each has its own organization for using nuclear data, reviewing and performing evaluations, and testing results.

The Evaluated Nuclear Data Format (ENDF) and Evaluated Nuclear Data Library (ENDL) are strongly influenced by their 1960s origins. Livermore researchers are working to modernize the way nuclear data are stored, evaluated, and used by eliminating the (left) punch-card-based format and developing one with (right) a hierarchical structure and nesting capability.

In the last decade, scientists worldwide recognized that both ENDF-6 and ENDL formats had serious limitations and were showing signs of age. “The formats have been stretched way beyond their 1960s-era origins,” says Livermore physicist and team member Caleb Mattoon. Both formats were designed to store data on 80-column punch cards. ENDF-6 and ENDL are designed to compactly fill the space on punch cards at the expense of human readability and, in the case of ENDF-6, numerical precision. (Fourteen characters in each line of ENDF-6 cards are reserved for identifiers to indicate the card’s order.) Data are often repeated, which can lead to possible internal discrepancies. Also, neither format can accommodate all types of reactions. For example, they can store values of the energy distribution of all neutrons emitted from a reaction but cannot handle information for reactions where the neutron energy distribution depends on the number of neutrons emitted. The obfuscated formats can sometimes contain small errors that go undiscovered for decades.

“People complained for years about ENDL and ENDF, but they were heavily invested in them,” says team member David Brown, who currently works at NNDC. “We went to great lengths to make square pegs fit into round holes, to make data fit the existing structure. At some point the process became unbearable, and we realized we needed a modern replacement.” Furthermore, a new generation of nuclear scientists and engineers must overcome a steep learning curve on how data are stored in the legacy formats before they can use the data for experiments and simulations. Mattoon says, “Younger researchers want to adopt more modern software concepts than the 1960s-vintage formats. We don’t want artificial barriers to growing the number of data evaluators.”

Livermore physicists began formally developing GND in 2009 with internal funding from the Weapons and Complex Integration Principal Directorate and additional support from the American Recovery and Reinvestment Act. The developers focused on reducing data redundancies, updating the data structure hierarchy of GND to reflect current understanding of nuclear reactions and radioactive decay, and making it user friendly. For example, “GND’s hierarchical structure and data nesting capability represents a significant advancement,” says Beck. “It reflects how physicists think about nuclear reactions experimentally and theoretically, and also how data are used in nuclear transport codes.” 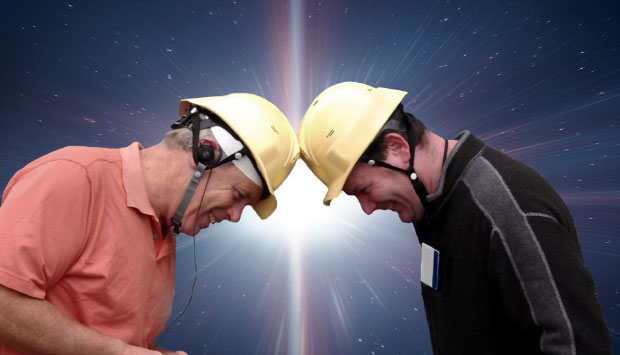 At a Subgroup 38 meeting in Tokai, Japan in 2013, two meeting participants, (left) Bret Beck from Livermore’s Generalized Nuclear Data (GND) team and Morgan White from Los Alamos National Laboratory, frequently held different opinions. During a tour of the Japan Accelerator Research Complex, the two overcame their differences and put their heads together, literally.

Listening to the Community

Early versions of GND were presented to the national and international nuclear data communities for feedback. This effort resulted in the formation of Subgroup 38, an international collaboration led by the GND team at Livermore, to oversee development of a modern nuclear data structure that will capture the current and future needs of the nuclear data community. Brown says, “GND represents a revolution in nuclear data, but it has not been a fast process. We’ve been working at it for 11 years because we’ve deliberately taken a consensus-driven approach.” The team expects that GND will be formally adopted as the new international standard by the end of 2017.

“We need to assure a smooth transition to GND,” says Mattoon. The team recognizes that GND must fit the existing nuclear data infrastructure by supporting backwards compatibility with ENDF-6 and ENDL for as long as 10 years. This compatibility will enable benchmarking and testing data and tools using the new structures against legacy results. A potential obstacle to early and widespread adoption of GND is the large number of legacy codes that only read ENDF-6 or ENDL-formatted nuclear data. As a result, Livermore physicists have developed Fudge, a “translator” code that processes nuclear data in multiple formats. The team is optimistic that GND will prompt researchers to update legacy codes, some of which were written in the 1960s and 1970s, so that they can also handle GND.

The new GND format is designed to support not only the traditional nuclear application areas of fission reactors, nuclear waste handling, criticality safety, and defense, but also emerging areas in nonproliferation, research accelerators, and uncertainty quantification. Other applications are certain to appear, and the Livermore team is confident GND will accommodate them. Beck also anticipates that GND will attract new people to the nuclear data community who prefer working with modern computational tools. In that respect, GND should open the field of nuclear data to a broader group of developers and users.