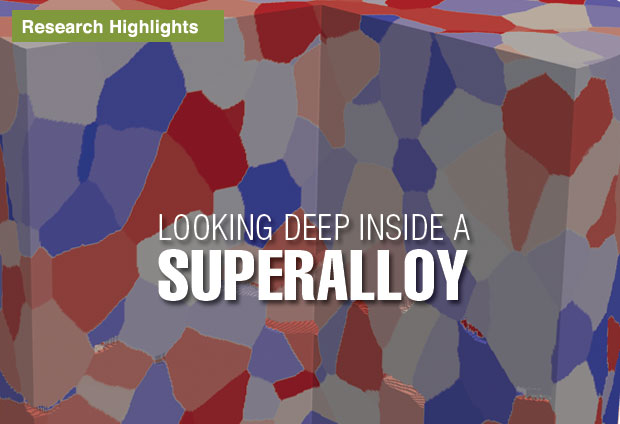 A three-dimensional (3D) rendering visualizes high-energy diffraction microscopy (HEDM) data. The reconstruction required collecting and analyzing more than 100,000 individual diffraction patterns from many thin slices. Combining the HEDM data with a 3D density profile determined with x-ray absorption tomography (XRAT) revealed the path of a crack and its relationship to grain boundaries (GBs) and other microstructure features.

Looking Deep Inside a Superalloy

Despite their monolithic appearance, metal parts used in various industries can consist of hundreds of millions of distinct microscopic crystalline particles called grains. Each grain is made of atoms arranged in a particular orientation, but the grains themselves are often randomly oriented relative to one another. Metals derive their strength and other mechanical properties from their internal structure, and the narrow spaces where individual grains meet—grain boundaries (GBs)—are where stress concentrates and cracks tend to form and spread.

Despite enormous strides in manufacturing methods to make metals stronger and more resistant to corrosion and fracture, parts subjected to harsh environments can still crack and ultimately fail, sometimes without warning. A leading cause of this failure is hydrogen embrittlement (HE), which is triggered by the entry and diffusion of hydrogen atoms, typically when the material is used in an aqueous or other corrosive environment. Even after a century of research, the physical mechanisms of HE are too poorly understood to predict HE-induced failure with high confidence.

A team of researchers, including Lawrence Livermore physicist Jonathan Lind, has applied nondestructive, synchrotron-based radiation to capture three-dimensional (3D) images of HE-induced microscopic cracks in metal. The images led the scientists to discover the relationship between the crystallographic character of metal grains and GBs and their susceptibility—or resistance—to HE. The team’s research method, called near-field high-energy diffraction microscopy (HEDM), paves the way to improved predictions of HE based on the crystalline orientation of individual grains. The work, funded by the Department of Energy and the National Science Foundation, could also advance materials processing methods aimed at limiting cracks and thereby strengthening metal parts and extending their lifespans. (See S&TR, December 2014, Crystals Go under the Microscope.)

Lind explains that hydrogen entering a metal diffuses into the GBs, reducing ductility, toughness, and strength and often forming cracks that spread. These cracks can cause costly component failures requiring expensive repairs in a wide range of industries, including petrochemicals, nuclear energy, transportation, construction, and medical devices. Even strong, advanced alloys are susceptible to damage from HE. For example, nickel-base alloy 725, a so-called superalloy and the focus of the team’s experiments, is designed for high strength and corrosion resistance in the oil-drilling industry, but nevertheless the material often exhibits cracks caused by HE. Lind says that improved strategies for predicting and preventing HE require deeper understanding of the 3D microstructural features that are most susceptible to this type of damage. Understanding the behavior of these features in the presence of hydrogen is key to improving lifetime predictions and designing HE-resistant microstructures.

This effort brought together Lind with colleagues from the Massachusetts Institute of Technology (MIT), Argonne National Laboratory, Johns Hopkins University, Carnegie Mellon, and Texas A&M University. At Argonne National Laboratory’s Advanced Photon Source (APS), HEDM was used to nondestructively image grain shapes and GBs of nickel-base alloy 725 with high-energy (50- to 100-kiloelectronvolt) synchrotron x-ray radiation from the 1-ID beamline. One of the few in the world specifically configured for HEDM measurements, the 1-ID beamline generates x rays by accelerating electrons to nearly the speed of light as they travel around a circular track. The resulting x-ray beam measures approximately 1 millimeter in width and penetrates a sample to a depth of several millimeters to several centimeters. 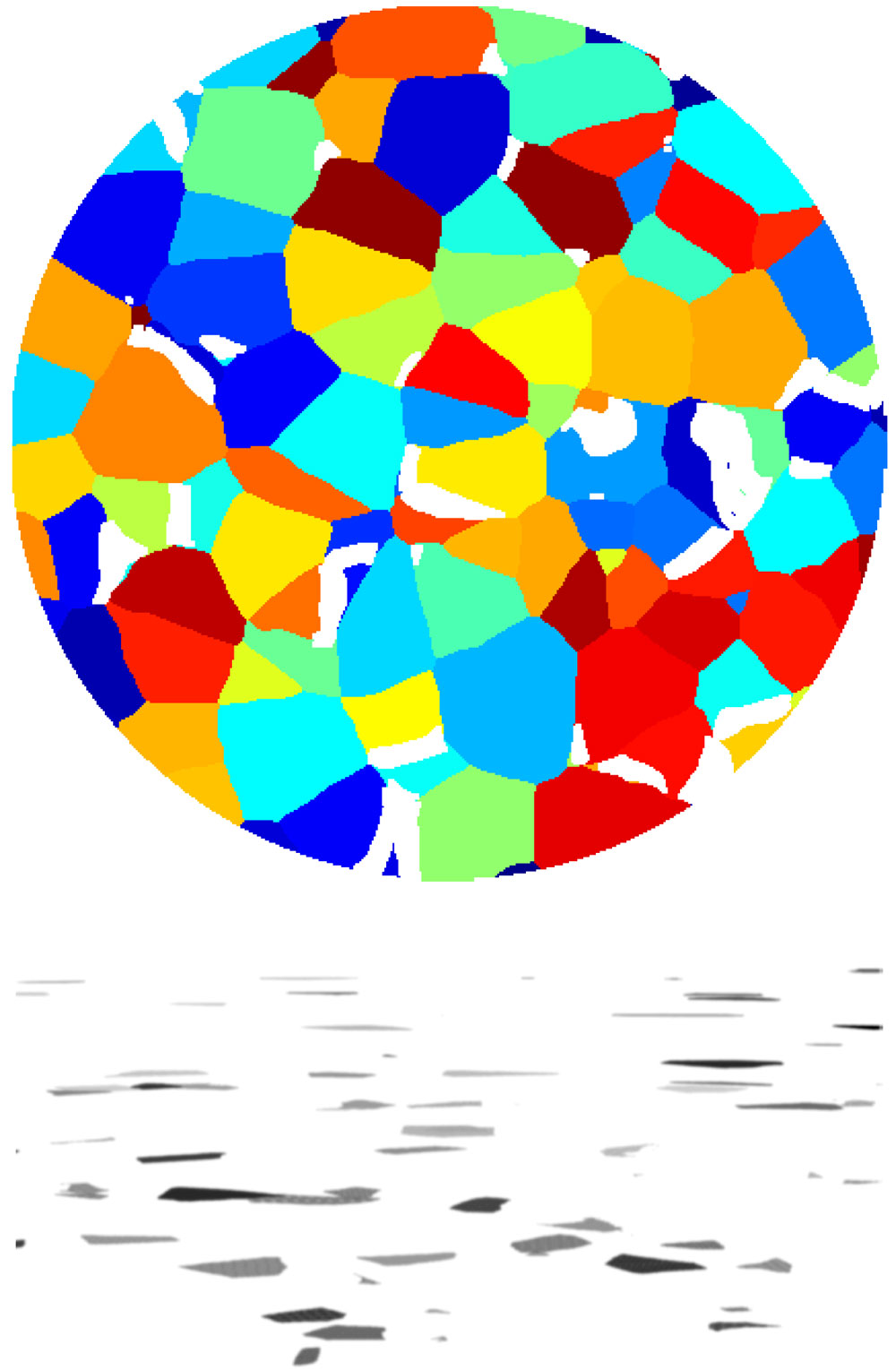 The researchers examined nickel-base alloy 725 specimens measuring 25 millimeters long and 3.8 millimeters in diameter. The material was electrochemically charged with hydrogen for seven days in solution, then slowly loaded in tension until failure, that is, the appearance of numerous cracks. One-millimeter-diameter cylindrical core samples were machined from each specimen’s interior in accordance with the x-ray beam’s size requirements. One sample contained the tip of a crack that extended across several grains with diameters of 90 to 125 micrometers. This crack tip—which became the main focus of the investigation—showed significant variation in orientation.

Two-dimensional (2D) HEDM diffraction patterns were obtained by passing an x-ray beam through the sample and capturing the diffracted x rays with a detector—a charge-coupled device camera paired with a scintillator that converts x rays to visible light. Because the x-ray beam is fixed in space, the sample was slowly rotated about an axis perpendicular to the beam over several minutes to bring all grains into multiple diffraction conditions. The procedure generated a sequence of 150 2D maps representing crystallographic orientations, which were then integrated into a 3D reconstruction of the microstructure.

The team also took advantage of the beamline’s capability for x-ray absorption tomography (XRAT). A form of computed tomography, XRAT allows a sample to also be scanned by HEDM without repositioning, thus enabling accurate alignment of the two data sets. With the XRAT data in hand, the scientists could link individual GB information collected by HEDM with the XRAT-derived 3D density information on crack morphology. Finally, Lind computationally reconstructed all the accumulated data from HEDM and XRAT into detailed, virtual 3D maps, or cross-sectional “slices” of the crack’s twisting tip. This reconstruction was accomplished using software called IceNine, which was developed in part by former Livermore physicist Frankie Li. In addition, the final 3D reconstruction using IceNine yielded a virtual cylindrical form containing 50,000 grains and measuring 1.2 millimeters in height. The extremely detailed 3D map revealed the shapes, sizes, and crystallographic nature of grains along fracture surfaces.

“Researchers have been relying on 2D images for a long time,” says Lind. “However, crack propagation is inherently a 3D problem, and so 3D information about cracks and how they travel through a metal is vital.” By analyzing the 3D reconstruction, the team identified a set of so-called crack deflection events, where the crack deviates markedly from its original path despite having a less complicated path along which it could have propagated. In one example, a crack initially traveled along a single GB until reaching a “triple line,” the intersection of three grains. The GB between two of the grains was well aligned with the crack plane and therefore appeared to be a likely path along which the crack could continue. Nevertheless, the crack proceeded along a different GB inclined at a high angle relative to the crack plane, which presumably required more energy.

(top) In a single radiograph from XRAT analysis, the density contrast from a crack is readily apparent. (bottom) More than 1,000 radiographs were used to find the 3D shape of this crack in the reconstructed XRAT data.

Choosing the Road Not Taken

These surprising findings led the investigators to identify a class of GBs that strongly resist the propagation of HE-induced cracks—a GB where at least one grain exhibits a low Miller index, or a “boundary with low-index plane” (BLIP). The Miller index describes a plane of atoms in the lattice of a crystalline grain, with a low index indicating that the atoms in the plane are more tightly packed than those with a high index. Where grains meet, a crack propagating through a BLIP would therefore be energetically unfavorable. In effect, BLIPs deflect propagating cracks, thereby toughening the material and improving its HE resistance. Paraphrasing poet Robert Frost, Lind observes, “BLIPs represent the road not taken.”

In the sample, the team identified 10 GBs that appeared to deflect cracks and prevent HE damage. Of these, nine fit the definition of a BLIP. By forcing the crack path to become more tortuous, BLIPs increase the total surface area created by the advancing crack, increasing the total work required and impeding its progression through a part. 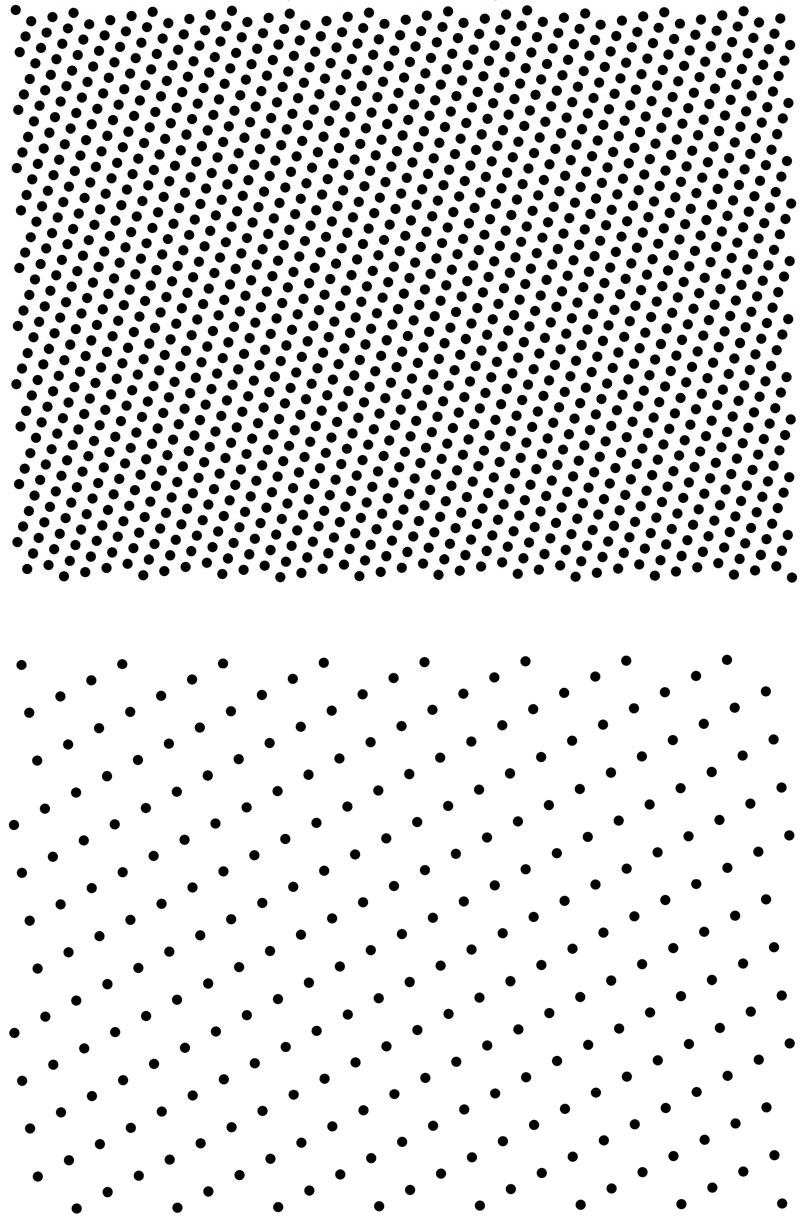 
The team’s work is applicable to Lawrence Livermore’s mission of stewarding the nation’s nuclear stockpile. A key element of that mission is predicting the strength of materials under extreme conditions, and findings about BLIPs could advance simulations that use high-performance computing to better understand how metals behave under extreme pressure. (See S&TR, September 2018, Solving the Mysteries of Metal Hardening.)

The discovery of BLIPs and the development of 3D microstructure mapping could pave the way to improved predictions of the behavior of metals affected by HE. In addition, special material processing could create stronger GBs to hinder crack propagation in metal components regularly exposed to water or acid. Lind says, “If a metal could have many more BLIPs, its microstructures could better deflect and inhibit cracks and thereby significantly increase the lifespan of parts. Therefore, we want to develop methods for processing metals to have a higher fraction of BLIPs.” The day may not be far off when stockpile stewards have further improved simulations and industries such as oil drilling have stronger, longer lasting metal parts.