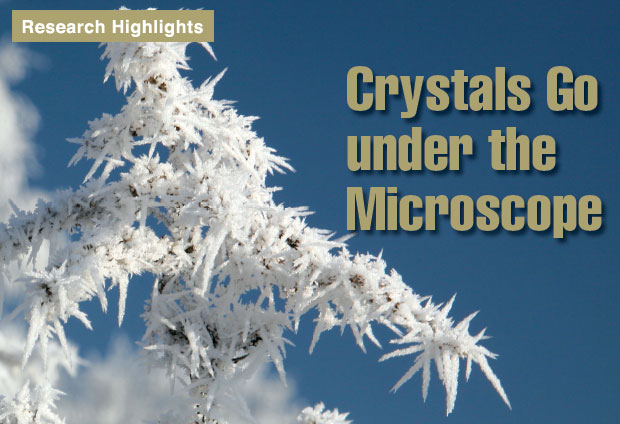 Crystals have long been admired for their symmetry and regularity. Scientific inquiry into their nature began in the early 17th century, when German astronomer and mathematician Johannes Kepler hypothesized that the symmetric shape of snowflakes was due to their underlying structure. This observation launched the study of crystallography, a field that was substantially advanced at the start of the 20th century by the pioneering research of Max von Laue and William and Lawrence Bragg. Von Laue found that x rays traveling through a crystal interact with its crystallographic planes and are scattered in directions specific to a crystal’s type. This discovery led to him winning the 1914 Nobel Prize in Physics. The Braggs earned the prize the following year for showing that information on the direction and intensity of diffracted beams can be used to create a three-dimensional (3D) image of a crystal’s structure. To celebrate the achievements of von Laue, the Braggs, and Kepler, the United Nations named 2014 the International Year of Crystallography.

Modern crystallographic research, performed using diffraction and various kinds of microscopy, underpins many realms of science. In areas as diverse as weapons, lasers, energy, and biotechnology, Livermore scientists use the micrometer- and nanometer-scale structural knowledge obtained through crystallography to better understand a material’s macroscale properties and predict the performance of advanced metals, alloys, and ceramics. Their investigations of polycrystalline materials typically focus on grain boundaries, the interfaces between individual crystals. The 3D arrangement of the crystals, or grains, and how those grains interact with one another affect a material’s mechanical, thermal, chemical, and electrical properties. For instance, grain boundaries influence how a metal behaves when it is squeezed or stretched and how likely it is to crack or corrode.

Crystal orientation mapping is a key method for characterizing grains and grain boundaries. Lawrence Livermore is one of the few institutions worldwide to maintain expertise in the three principal mapping techniques: scanning electron microscopy (SEM), transmission electron microscopy (TEM), and high-energy diffraction microscopy (HEDM). These methods, used singly or in combination, provide structural information at a range of scales, which is valuable in developing materials for various scientific and engineering applications.

Electron backscatter diffraction (EBSD) is an SEM-based technique that images a material’s microstructure with a resolution of 20 to 50 nanometers. EBSD experiments on crystalline samples with features from 100 nanometers to 1 millimeter in diameter reveal the size and shape of individual grains, boundary characteristics, orientation, distribution of orientations (often referred to as texture), and phase identity.

In EBSD experiments, an SEM’s stationary electron beam strikes a tilted crystalline sample, and the diffracted electrons form a pattern of intersecting bands on a fluorescent screen. The pattern is captured by a digital camera, which passes the data to specialized computer software for analysis. Given initial input about the types and potential phases of crystals under study, the software compares the generated image with mathematically predicted diffraction patterns of a model structure, refining the model’s predictions until they closely match the actual pattern. Scanning multiple points on the sample with the electron beam enables the system to reconstruct an orientation map of the sample’s surface microstructure. Scientists can then apply various statistical tools to measure average misorientation, grain size, texture, and other features.

Livermore researchers have been using SEM-based EBSD for nearly two decades and thus have considerable expertise with this technique, even compiling two editions of an authoritative EBSD textbook. In fact, the Laboratory acquired one of the first commercial systems and helped develop and test data-analysis algorithms that were later incorporated into the standard EBSD software. Livermore materials scientists also worked to improve the technique’s efficiency and ease of use. For example, the pattern indexing process, once a tedious manual task, is now automated and takes less than a few milliseconds with modern computers.

Materials scientist Mukul Kumar in Livermore’s Engineering Directorate performs EBSD characterization experiments for additive manufacturing research. “This technique is part of the material development cycle for our laser melting additive manufacturing work at the Laboratory,” notes Kumar. “It allows us to quickly examine large amounts of data to determine grain size and orientation.”

A newer technique called TEM-based orientation mapping examines crystal orientation and texture at a finer spatial scale than SEM. This technique uses precession electron diffraction to produce higher-quality maps than EBSD can generate and with fewer artifacts. When TEM transmits a beam of electrons through an ultrathin material sample, the electrons interact with a crystal’s atoms and form a diffraction pattern. The pattern is magnified and focused onto a fluorescent screen, where it is captured by a camera and passed to software for indexing and analysis. Livermore scientists’ experience with fine-tuning EBSD analysis has aided efforts to automate the TEM mapping process and enhance the associated software, most recently by improving resolution to 2 nanometers. A single scan with the automated TEM process can probe and map hundreds of thousands of points on a sample, allowing researchers to analyze grains at a level of detail, accuracy, and efficiency not possible with the manual approach.

For TEM mapping, samples are made extremely thin—preferably, a single grain thick—so that electrons can pass through them. The volume of material sampled is too small for collecting statistical information about crystal structure, but it does provide a more detailed view than EBSD does of specific boundaries or sample regions. Orientation mapping with TEM also helps researchers understand how a material’s microstructure evolves during processes such as annealing.

Materials scientist Joe McKeown uses the TEM mapping technique to illuminate crystal growth in metals and alloys during nonequilibrium solidification processes. (See S&TR, September 2013, A Bright Idea for Microscopy.) In experiments with an aluminum–copper alloy, he compared orientation maps created before and after solidification and noted some unexpected behavior. “With that alloy, we might expect the grains to grow with a specific orientation,” says McKeown. “Instead, mapping showed that the growth orientations were almost completely random. Our finding indicates the material cooled very quickly, so growth orientation was not a significant factor.” 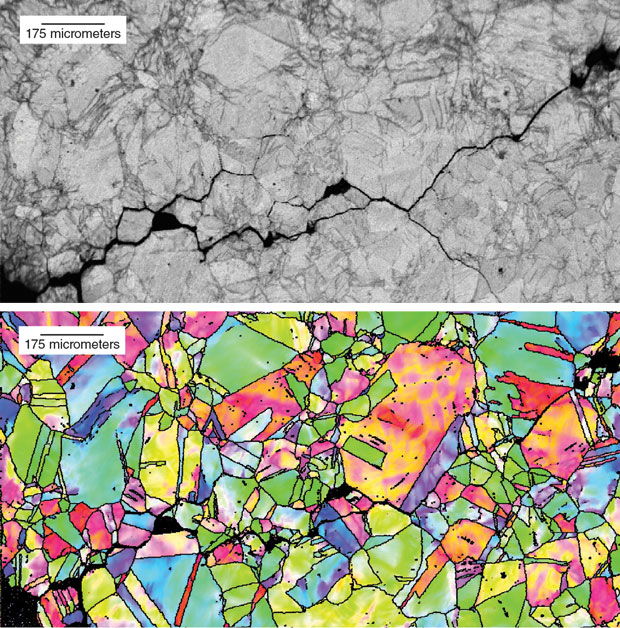 Livermore scientists used SEM-based electron backscatter diffraction to study crack propagation. This technique reveals how cracks travel through different microstructures, allowing researchers to predict when and where fractures will form and what paths they will follow—information that helps pinpoint where a component is most likely to fail. In the bottom image, colors indicate grain orientation.

“What typically determines the lifetime of a component is its failure through crack formation or other processes that are dominated by rare events—say, 1 in 10,000,” says computational engineer Shiu Fai (Frankie) Li. “The only way to study such events is to increase the sample size.” The newest of the three mapping techniques, HEDM, offers that capability. With HEDM, high-energy x rays penetrate millimeters or centimeters below a material’s surface to map its internal microstructure in 3D. The trade-off for larger-scale mapping is reduced spatial resolution, limited to 1 micrometer.

“HEDM lets us resolve as many as 250,000 individual crystals,” says materials scientist Joel Bernier. “It’s like doing 250,000 single-crystal experiments concurrently and getting information on the interactions between the crystals. Lots of interesting interactions are occurring at this scale.” In collaboration with the Air Force Research Laboratory, Bernier is applying HEDM to study the formation and evolution of microcracks and voids in titanium under the stress of a constant load. Results will be used to design more durable jet engine turbines.

During an HEDM experiment, 0.025- to 0.01-nanometer x rays are focused into a micrometer-high beam, which illuminates a small section of a rotating cylindrical sample only 1 millimeter in diameter. A charge-coupled device detector captures the patterns formed by the x-ray–crystal interactions and sends them to a supercomputer for data analysis. As in the early years of SEM and TEM orientation mapping, reconstructing a crystal’s microstructure with HEDM is extremely challenging. Li and postdoctoral researcher Jonathan Lind are developing and refining advanced computational techniques and related software components for collecting and analyzing the diffraction patterns. Both researchers were students of Robert Suter at Carnegie Mellon University, who codeveloped the HEDM technique.

“The data output from an HEDM experiment is immense,” says Li. “The increasing computational power available allows us to use technologies that 20 years ago could not handle all of that information. As it is, we’re pushing the limits of the resources we have for collecting statistics and reconstructing objects in 3D.”

Three-dimensional imaging with SEM and TEM is time consuming and requires removing successive layers of a sample to record and analyze its microstructure, which destroys the sample. HEDM also acquires 3D measurements layer by layer, but the process is nondestructive. As a result, the technique facilitates in situ study of material dynamics—how the microstructure responds to mechanical or thermal stimuli—as well as experimental modeling. The HEDM characterization technique is growing in popularity. At present, the Advanced Photon Source at Argonne National Laboratory is the only U.S. site performing HEDM experiments, but Livermore materials scientists are helping to establish a second facility at Cornell University’s High Energy Synchrotron Source. 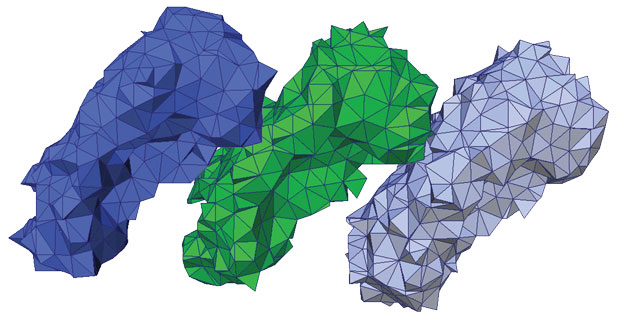 Crystal orientation mapping with HEDM reveals subtle changes in the curvature of a material’s surface and the shape of each grain as it is squeezed, stretched, twisted, or heated. The maps shown here capture a material’s microstructure at three stages of an annealing experiment.

Individually, the three orientation mapping technologies are quite effective. Used in concert, they offer scientists an unprecedented understanding of material microstructure, from the nanometer to the micrometer length scale. For example, in an effort funded by the Department of Energy’s Office of Basic Energy Sciences, Livermore researchers are applying the techniques to study at multiple scales how radiation-induced defects interact with internal interfaces, which can lead to heat-induced grain growth (thermal coarsening) and fracturing. This work could help scientists design new materials for next-generation nuclear reactors.

By combining the techniques, the researchers have tracked and compared grain growth and grain-boundary evolution in stainless-steel and copper samples that have different concentrations of a special boundary called a twin boundary. A twin boundary, like a grain boundary, has different crystal orientations on its two sides, but the orientations are not random; rather, they mirror one another. (See S&TR, January/February 2014, In Metals, Not All Twins Are Identical.) A high concentration of twin boundaries in a metal increases that metal’s strength. The Livermore team’s research showed, however, that these boundaries alone will not prevent thermally or mechanically induced grain growth. The network of grain boundaries, particularly the connectivity of twin boundaries within a material, governs how likely a metal is to coarsen and crack. Says Kumar, “When it comes to grain coarsening, we’ve shown that the spatial distributions of these special boundaries matter, even in pure metals. This is a scientifically interesting result.”

At Livermore, scientists are making steady advances in their work to understand, anticipate, and control material properties at a range of scales. The research methods they have developed for mapping crystal orientations and boundary regions can be applied to pure metals such as copper and tantalum, which serve as proxies for many Laboratory efforts, as well as to more commercial materials such as stainless steel and nickel-based alloys, which are used in nuclear reactors and other applications. “The Laboratory has played a significant role in extracting information on microstructure by looking at networks spanning hundreds or thousands of grains,” observes Kumar. “We’re pushing the limits of technologies that in some cases didn’t exist even five years ago.”