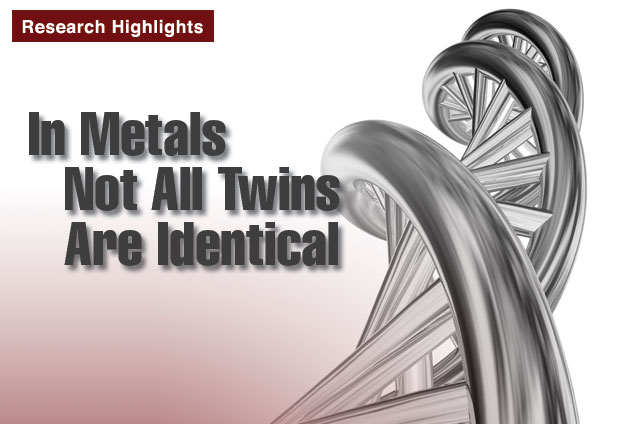 From the steel used in construction to the copper in circuit boards, most metals are made of closely packed crystallites, or grains, which can range in size from nanometers to millimeters (10–9 to 10–3 meters). For many applications, shrinking the grain size of these materials can confer notable macroscale performance benefits. For instance, smaller grains have more surface area in contact with neighboring grains, which can make a metal stronger. When metal is compressed, twisted, or stretched, atoms move out of position in the crystal structure, producing dislocations that deform the material. Just as a retaining wall holds the soil on a steep hillside in place, the interfaces, or boundaries, between grains help limit the formation and motion of dislocations. Generally, the greater the number of boundaries, the better a material is at halting dislocations.

Material scientists have more recently turned their focus to another type of boundary, found within the crystalline structure of ordinary metals such as silver, copper, and gold. This interface is called a coherent twin boundary (CTB) because one side is a mirror image, or twin, of the other. “Twin boundaries have emerged as the second most important interface in materials science, after grain boundaries,” says Lawrence Livermore materials scientist Morris Wang. “They can affect many fundamental applications and projects.”

Most research into CTBs and the properties they imbue in metals has relied on the assumption that CTBs are a smooth, flat, one-atom-thick plane. However, experimental and computational research by Wang and several colleagues has shown that CTBs in nanotwinned copper are not perfect planar interfaces but instead are riddled with tiny steplike features and curvatures. Indeed, these defects are largely responsible for the desirable mix of properties in nanotwinned metals. 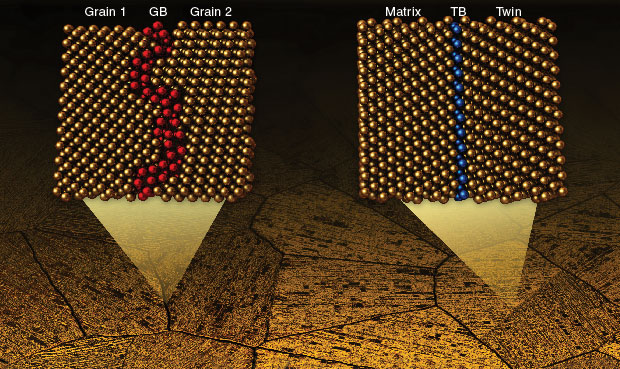 The mechanical properties of nanotwinned metals depend on both the size of crystals, or grains, and the spacing between twin boundaries (TBs). Two types of interfaces in a nanostructured crystalline metal are shown in two dimensions: (left) a typical grain boundary (GB) and (right) a coherent TB.

Livermore scientists have conducted several experiments over the past few years to better understand the nanoscale features of nanotwinned copper and how they correlate with macroscale properties. Together with Ames Laboratory researcher Ryan Ott, they examined the mechanical properties of nanotwinned copper samples using in situ synchrotron x-ray diffraction (SXRD) at Argonne National Laboratory’s Advanced Photon Source. The synchrotron’s intense x rays allowed the researchers to track material response to applied stress at a microstructural level, both at room temperature and at 180ºC.

The material deformed far more readily at the higher temperature. When samples were examined with a transmission electron microscope (TEM), the heated metal exhibited more dislocation movement and twin boundary separation, consistent with its ease of deformation. At both temperatures, though, the movement and separation were more extensive than anticipated. Materials scientist Thomas LaGrange explains, “The in situ deformation experiments displayed an anomalous drop in strength along a particular crystal direction. Twin boundaries that we thought to be stable and stationary were moving.” The team began to suspect that twin boundaries might be less reliable than assumed.

Using fresh nanotwinned copper samples, the Livermore researchers characterized the material’s nanoscale structure. They used a new electron-diffraction crystal orientation mapping method, called inverse pole figure orientation mapping (IPFOM), that works with a TEM. IPFOM collects and organizes up to 250,000 frames of nanodiffraction patterns at a time and then accurately determines how each region is oriented, or misoriented, with respect to the surrounding crystal structure.

The typical mapping technique, scanning electron microscopy–based electron backscatter diffraction, resolves features roughly 50 nanometers or larger. By pushing the limits of the IPFOM device, the team was able to capture features as small as a nanometer—a mere five atoms wide. The images enabled them to identify previously unseen features and gather statistics on twin and grain interfaces. At moderate resolution, the metal appeared to contain mostly “normal” CTBs, interspersed with a few defective, or incoherent, twin boundaries. However, at high resolution, the researchers could see that most of the seemingly perfect twins had many steplike incoherent segments, which ranged from 1 to 5 nanometers in height. Although the placement of these imperfections varied, their concentration was remarkably consistent, indicating that twin boundaries might be intrinsically defective. 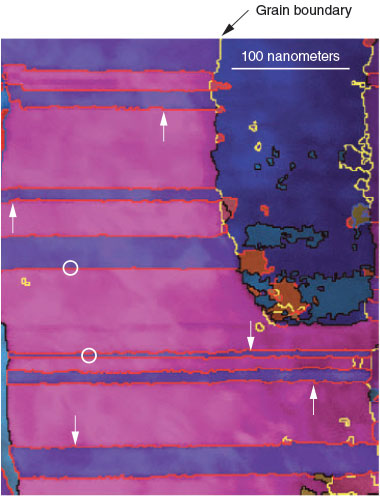 High-resolution inverse pole figure orientation mapping provides essential information about the microstructure of nanotwinned copper, including boundary defects. In this edge-on image, a GB is indicated by the yellow and black line segments. The white circles mark a defect-free TB region, while the white arrows mark the location of selected TB defects.

At the atomic level, nanotwinned copper structure is clearly more heterogeneous and its deformation more complex than materials scientists had assumed. To better understand the experimental results, the Livermore researchers, together with University of Vermont professor Frederic Sansoz, performed molecular dynamics simulations at the Vermont Advanced Computing Center. In a series of scenarios, they compared how perfect and imperfect twin and grain boundaries responded under loading conditions similar to those in the SXRD investigations.

The researchers found that copper modeled with defective twin boundary segments more closely matched experimental observations. In fact, the defective twin regions were largely responsible for the combination of strength and ductility observed in nanotwinned metals. Simulations showed that when nanotwinned copper was stretched, the imperfect twin boundaries initially pinned the dislocations in place, strengthening the material. Continued stress caused the areas to de-pin and the material to soften and flow. When the metal was twisted, the stepped regions of twin boundaries migrated and separated, or detwinned, rather easily. Detwinning removes a supportive interface, which can make the material more ductile but less strong, because fewer interfaces are available to impede dislocation motion. 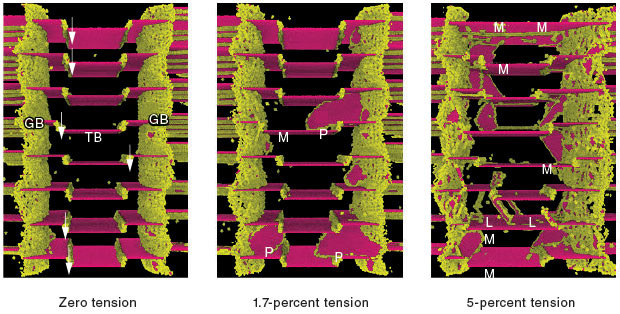 A molecular dynamics simulation illustrates the evolution (left to right) of the microstructure within a grain of nanotwinned copper subjected to uniaxial tension. Both defective GBs and stepped (defective) TBs are shown in different stages of deformation. Vertical arrows indicate the positions of migrating stepped imperfections. The locations where step migration and partial dislocation from GBs occur are marked M and P, respectively. L indicates locked, or pinned, regions.

From Aberration to Asset

Livermore modeling results revealed that the material properties of a nanotwinned metal are dictated to a great extent by the concentration, placement, and type of twin and grain boundaries in the microstructure. Given these variables, not every nanotwinned metal sample will behave uniformly. Says Wang, “We need to redefine the concept of twin boundaries. A variety of grain boundaries exist, and now we know that twin boundaries also vary.” Twin-boundary diversity could be advantageous, potentially enabling material scientists to formulate and fabricate a microstructure tailored to meet a specific macroscale need. For example, researchers could develop a material that would reduce the likelihood of stress cracks in a nuclear reactor pressure vessel.

A daunting amount of work remains, but as Livermore researchers endeavor to develop metals with superior strength—work directly relevant to many of the Laboratory’s missions—they will be aided by a first-of-its-kind capability that enables them to map strain on a nanometer scale during TEM-based deformation experiments. LaGrange notes that one of the first applications of the new strain-mapping capability will be to study the role of triple junctions, places where twin boundaries and grain boundaries meet, in accommodating stress and influencing deformation behavior.

In addition, Ames Laboratory scientists, in collaboration with Wang, plan to examine whether doping enhances the strength of nanotwinned silver, the most electrically conductive metal. If effective, nanotwinned silver may eventually be used to make cheaper and sturdier transparent conductive electrodes, which are key components in both solar panels and the light-emitting diode displays found in cellular phone and television screens. With a greater understanding of their formation and properties, material scientists, designers, and manufacturers will soon begin viewing “defective” twin and grain boundaries as potential assets.