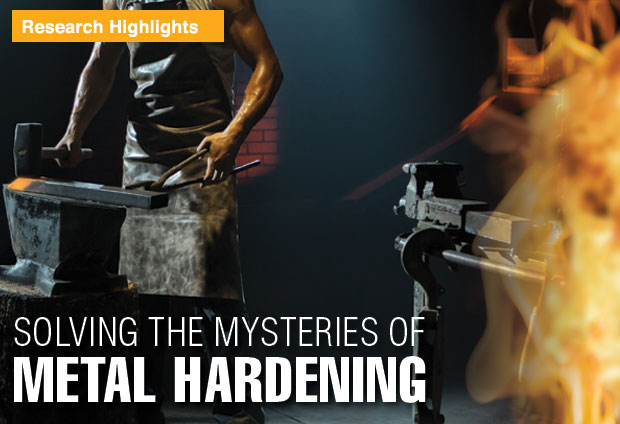 Solving the Mysteries of Metal Hardening

Without understanding why, metalsmiths have known for centuries that repeatedly heating and folding a block of metal would strengthen the material. Incorporating this technique into their craft, the master swordsmiths of medieval Japan forged elegantly curved, razor-sharp katanas for samurai warriors—blades exceptionally strong for their light weight. Around the same time, Damascus steel, hardened in similar fashion, became the metal of choice for the fearsome blades used in the Near East. In Russia and other countries, the metal was called bulat steel and formed the weapons carried by Genghis Khan’s armies.

However, an understanding of the science behind this metal-hardening process has only recently begun to emerge, thanks to modern theoretical investigation, observational tools, and computer models. At Lawrence Livermore, materials simulations using high-performance computation are peeling back the layers of mystery, revealing some surprising insights into how metals behave under extreme pressure. Driving this research is the Laboratory’s mission of stewarding the nation’s nuclear stockpile. The simulations also contribute to basic science and may have applications in aerospace, astronautics, and other fields where materials are used under high-stress, high-temperature regimes.

Vasily Bulatov, a Livermore computational materials physicist, leads a research team working to simulate how metals behave under high pressure. Bulatov, who has studied the behavior of metals for more than two decades, says, “Our mission is to predict the strength of materials under extreme conditions. We are funded by the National Nuclear Security Administration’s Advanced Scientific Computing Program, which seeks precise computations instead of some of the measurements previously obtained through nuclear testing.”

The Dynamics of Dislocations

Arriving at the Laboratory from the Massachusetts Institute of Technology in 1999, Bulatov realized that a model was needed to predict metal strength. “None of the existing codes at that time could even form the basis of such simulations,” he explains. He assembled a research team that eventually developed ParaDiS (Parallel Dislocation Simulator), which modeled the dislocation dynamics of metals. Dislocations—irregularities in the crystalline structure of atoms—help explain the strength and ductility of metals. Metallic atoms typically arrange themselves into regular stacks as tennis balls do in a crate, with the centers of the atoms aligning in parallel planes. In one type of dislocation, some planes of atoms are slightly displaced relative to their neighbors such that their centers form a half-plane that displaces the adjacent stacks of atoms to either side. The line formed by the edge of this malformed plane is called an edge dislocation. Another major type of disarrangement is an angular variety called a screw dislocation. Characterizing dislocation patterns is the first step in modeling metals under high pressure. 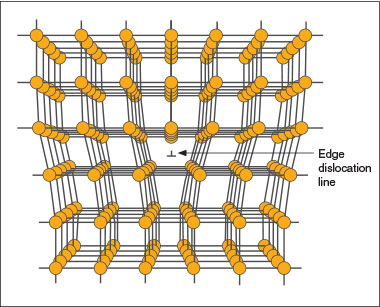 When a metal is compressed through repeated blows by a metalsmith’s hammer, for example, the force pushes existing dislocations through the material and creates new ones, as well. As these irregularities migrate, some collide with each other, merging or forming junctions that actually strengthen the metal by resisting further strain. Bulatov says, “Take the classic example—an aluminum paper clip. Bend it back and forth a few times, and eventually it starts to harden. The more you bend the metal, and the more dislocation lines are created and collide with each other, then the harder it becomes for the lines to move. This response to stress defines the material’s strength.”

In 2006, Bulatov’s team simulated the element molybdenum. Their results suggested that the behavior of dislocation lines under stress explained the material’s crystal strength, but he more to the story remained—that only an atomistic model could reveal whether any other phenomena influenced hardness. However, even the Laboratory’s fastest computers of the time could not model a large enough number of individual atoms to achieve a fully atomistic simulation of metal strength, also known as a molecular dynamics simulation.

The Need for Speed

“When I began investigating the problem, computers were seven orders of magnitude slower than they are today,” recalls Bulatov. “But a moment came two years ago when computers became powerful enough to make an atomistic model a reality.” Using Vulcan and Sequoia, Livermore’s two most powerful computers, Bulatov and his team began using software called LAMMPS (Large-Scale Atomic/Molecular Massively Parallel Simulator) Molecular Dynamics Simulator for this purpose. Developed by Sandia National Laboratories, LAMMPS is an open-source code that allows users to study the physical movement of atoms and molecules.

The team ran simulations of tantalum (Ta), a hard yet ductile, corrosion-resistant metal with applications such as electronic components, jet engines, and surgical instruments. Starting from atomic configurations generated by Bulatov, Livermore’s Luis Zepeda-Ruiz and Alexander Stukowski of Germany’s Technische Universität Darmstadt ran the simulations. The Laboratory’s Tomas Oppelstrup optimized the code and data management. In one of the simulations, rectangular bricks of Ta atoms were compressed serially in three directions—stresses were applied first lengthwise, then along the width, and finally along the height of the blocks repeatedly, “kneading” the metal like a lump of dough. In simulations consisting of up to 268 million individual Ta atoms, the team each day generated approximately five exabytes (1018 bytes) of atomic trajectory data, comparable to all the data that Google currently has stored on servers worldwide. 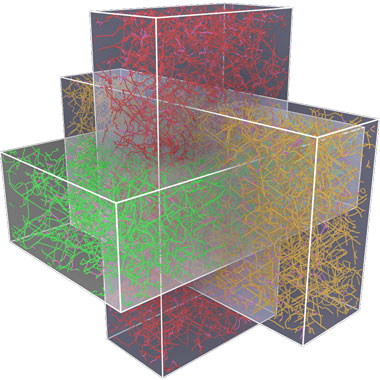 Tantalum crystals can flow indefinitely, similar to a viscous fluid, while remaining stiff and strong and retaining their ordered lattice structure. Three juxtaposed snapshots depict lattice defects—dislocation lines—developing when the material is kneaded like a piece of dough.

This work, published in 2017, yielded two significant scientific findings. First, the team found that as Ta is compressed, its dislocations extend and collide with each other, moving actively to prevent the metal from breaking. This behavior imparts ductility to the metal—but that was not all. “Something else rather dramatic happens,” says Bulatov. “If you strain the metal very quickly, the dislocations are unable to keep up, and whole chunks of the crystal rotate, a phenomenon called deformation twinning. We showed a very precise threshold where this transition from dislocation to twinning takes place.”

During twinning, planes of atoms do not slide past one another as happens with moving dislocations. Instead, regions of material twist in opposite directions from one another, resulting in volumes with distinct crystal orientations. Scientists had previously theorized that this transition was possible, but simulations by Bulatov’s team revealed the precise atomistic mechanism and the conditions under which the transition occurs.

The second key finding announced in 2017 concerns Ta behavior during slow compression. “When tantalum deforms slowly enough that that the dislocations can keep up with the applied forces, the crystal reaches a steady state that persists forever,” explains Bulatov. If the metal is compressed in such a way that the transition to twinning is not reached, dislocations will continue to migrate through the material endlessly, and this mechanism will remain dominant, preventing the metal from breaking. Kneading thus ensures that no other changes will happen, and that the metal will retain the same strength indefinitely. This may be the molecular secret to the famously strong swords. 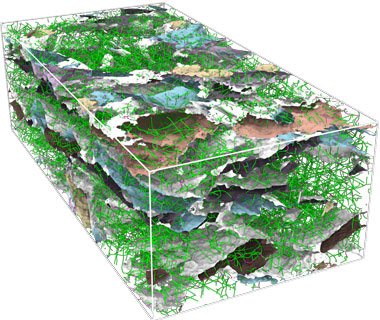 The crystal structure of tantalum is compressed in a molecular dynamics simulation. All atoms are removed for clarity, and the structure is represented by lattice defects—dislocations (green and red lines) and interfaces of twin particles (surfaces of various colors).

Metals subjected to force often harden in stages, undergoing a low level of hardening upon initial compression, then high-strength hardening, and back to low-level hardening until breakage occurs. The reasons for this three-stage process are not fully understood, but further simulations may elucidate what is happening at an atomic level. Since reporting their work, Bulatov’s team has run an even larger simulation involving more than two billion atoms. The results are still being analyzed. Because these simulations generate so much data, Bulatov is planning to use machine learning to identify the significant data and detect patterns in data sets too large for humans to comprehend. Recent simulations have generated a volume of data equivalent to seven to ten times the data on Google’s servers worldwide.

Bulatov is optimistic about solving the remaining mysteries of metal hardening. He states, “As both computing power and the accuracy of atomic models steadily increase and, at the same time, the spatial and temporal resolution of experimental methods in materials science improve, we are increasingly seeing the complete confluence of experiments and atomistic simulations.” For solving the mysteries of their ancient craft, the swordsmiths of yore would be impressed indeed.