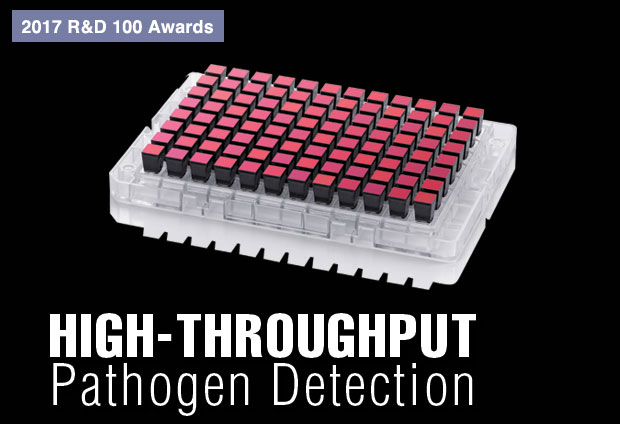 Each square on the Applied Biosystems™ Axiom™ Microbiome Array (ABAMA) represents 1.4 million probes—fragments of DNA that complement the isolated genetic markers of sequenced microbes. The array analyzes 96 samples in parallel, allowing scientists to run more tests simultaneously at much lower cost per test.

Anyone who has been sick knows the uncertainty that comes with trying to determine the cause of the illness. In cases of bacterial, viral, and other infections, the microbes responsible could be difficult to identify. Pathogen identification is important for determining whether a condition may be life-threatening and establishing effective treatment options. Thus, diagnostic platforms that can rapidly detect and characterize microbial agents are becoming a vital tool for protecting human health and safety.

In 2008, a team of Livermore biologists and informatics specialists developed the Lawrence Livermore Microbial Detection Array (LLMDA) to simultaneously identify up to 6,000 pathogens from known viruses and bacteria within 24 hours. (See S&TR, December 2010, Quick Detection of Pathogens by the Thousands; and S&TR, April/May 2013, A Faster and Cheaper Method to Detect Agents of Disease.) Recently, through a technology-transfer partnership with Affymetrix and its parent company Thermo Fisher Scientific, the Livermore team helped transform the LLMDA platform into the Applied Biosystems™ Axiom™ Microbiome Array (ABAMA), which has a higher throughput. The technology earned the development team a 2017 R&D 100 Award.

ABAMA is the first high-throughput pan-microbial detection device. It can analyze 96 samples in parallel and detect more than 12,000 unique microbial species, including all known bacteria, viruses, fungi, archaea (primitive bacteria), and protozoa. In situations as diverse as battlefield medicine, analysis of suspected bioterrorism, and cancer screening, ABAMA’s breadth and accuracy is becoming indispensable.

The discovery of DNA in the 19th century paved the way for many scientific advances, including microbial detection. In particular, it became the basis for polymerase chain reaction (PCR)—a relatively inexpensive, fast, and sensitive way to detect known organisms in a sample. However, PCR can typically detect no more than about 50 different organisms at one time. Full-genome sequencing is the most accurate identification method, but the technique is time-consuming and expensive. Alternatively, ABAMA is a quick, accurate, and inexpensive technology that provides genome-level resolution for identifying all sequenced microbes present in a sample.

Individual samples assayed by ABAMA are exposed to 1.4 million different DNA probes—short stretches of DNA that complement the isolated genetic markers of sequenced microbes. Each probe is designed to be definitive at one of three taxonomic levels (genus, species, or strain). The probes are then synthesized on a small, square plastic surface (called a “chip”) that is replicated 96 times, allowing as many samples to be tested in parallel. During processing, fragments of DNA from each sample are circulated over one array for several hours, allowing sample regions to “hybridize” or bond with their corresponding probes on the array. “If a DNA sequence from the sample matches a sequence on the array, the target DNA will bind to the array and that spot will fluoresce, or light up,” says Laboratory biologist and ABAMA codeveloper Crystal Jaing.

Data analysis is performed with Applied Biosystems™ Axiom™ Microbial Detection Analysis Software (MiDAS) from Thermo Fisher Scientific. Using a composite likelihood maximization algorithm, the software successfully chooses the sequenced microbe that most closely matches the probe signals. In addition, since the ABAMA chip only corresponds to microbial DNA, the new array safely disregards the genetic material from the host organism, such as the 3 billion base pairs of human DNA. As a result, scientists can know which microbes, pathogenic or not, are present in the sample, typically within 24 hours. 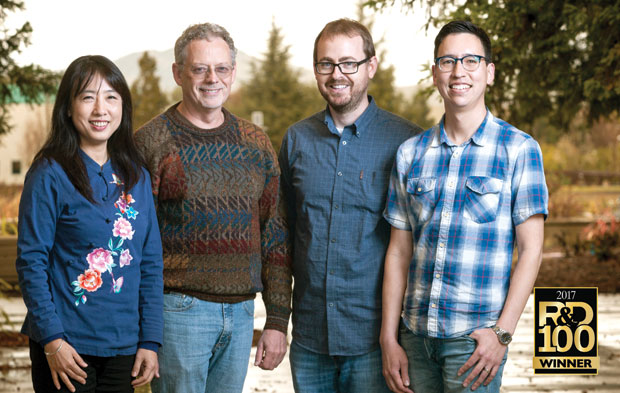 Development team for ABAMA: (from left) Crystal Jaing, Kevin McLoughlin, James Thissen, and Nicholas Be. (Not shown: Shea Gardner, who passed away in 2016, and Tom Slezak.)

ABAMA’s efficiency is causing the scientific community to rethink the way it conducts microbial analysis. The array can run 96 samples simultaneously, which presents a new challenge for scientists, many of whom have never had cause to prepare that many samples at once. Most other array methods can analyze up to 12 samples at a time, giving ABAMA a substantial advantage over its predecessors and at a much lower cost per test. Tom Slezak, who led the Livermore development team, says, “When you develop a big breakthrough technology, the world takes a while to catch up.”

Since LLMDA was initially conceived in 2003, Slezak says, its development has been “a huge team effort,” drawing from biology, computer science, chemistry, and genetics. The initial array’s versatility and affordability has led to more than 40 collaborations around the world. In 2010, it was used to identify a pig virus (later determined to be benign) unknowingly present in a pediatric rotavirus vaccine, and more recently, it was used to look into the dangers of pathogens in microgravity aboard the International Space Station (see S&TR, January/February 2018, Microbiome Research Takes Flight). Other collaborations and sponsorships have included the Department of Defense, the Department of Homeland Security, the Centers for Disease Control and Prevention, and the Food and Drug Administration. The technology was even used to detect the bubonic plague in a 700-year-old tooth found in a medieval London cemetery.

ABAMA went into the market in August 2016, and today the device is offering an award-winning, revolutionary new screening method to scientists and researchers worldwide. For a growing array of scientific, governmental, and medical fields, ABAMA is shedding much-needed light on a challenging microbial problem.