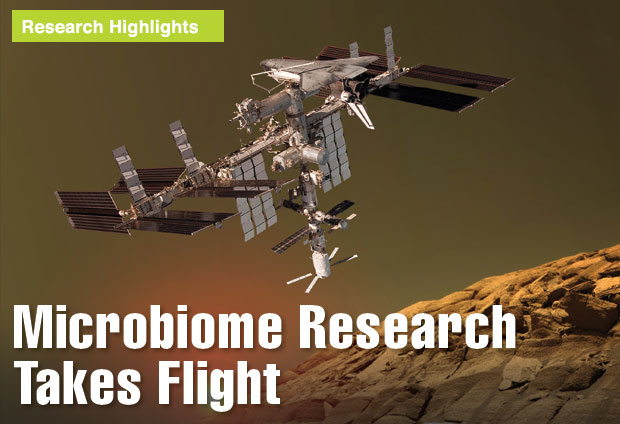 On a flight to Mars or during an extended stay in low-Earth orbit on the International Space Station (ISS), the little things sometimes matter the most. Regardless of the stringent cleanliness protocols required prior to space flight, a sizeable population of microscopic organisms—bacteria, fungi, and viruses—ride along with the astronauts and their gear. Once in the closed system of the spacecraft, those microorganisms, or microbes, are difficult to avoid or entirely eliminate. Although more than 80 percent of microorganisms have a neutral or beneficial role in human health, the remainders could cause illness and potentially put the success of a long-term space mission at risk.

Biologist Nicholas Be explains, “Microgravity, increased radiation levels, restricted diet, and limited hygiene options in space cause our immune systems to function a little differently than on Earth. As a result, organisms that might only have an effect on immunocompromised individuals on Earth could have broader health implications in space.” The development and composition of microbial communities can also be different in space. The harsh space environment is highly selective for hardy organisms. Further, radiation and microgravity can boost the growth and mutation rates of some microbes, which may make any illness stemming from them more severe or difficult to treat.

Cataloging and characterizing the composition and evolution of the ISS crew members’ microbiome—the microbial communities in, on, and around the astronauts—is a key step to ensuring that the right prevention methods and treatment protocols are in place as NASA develops new missions to ISS and beyond. With this goal in mind, biologist Crystal Jaing is leading a team of researchers from Lawrence Livermore, the Jet Propulsion Laboratory (JPL), the NASA Ames Research Center, and Johnson Space Center in systematically investigating the ISS crew members’ microbiome and their environment. Leveraging the Laboratory’s extensive bioinformatics capabilities, including the Lawrence Livermore Microbial Detection Array (LLMDA), and high-performance computing resources, the scientists are evaluating microbiome data to determine which, if any, pathogens are of health concern during space flight. 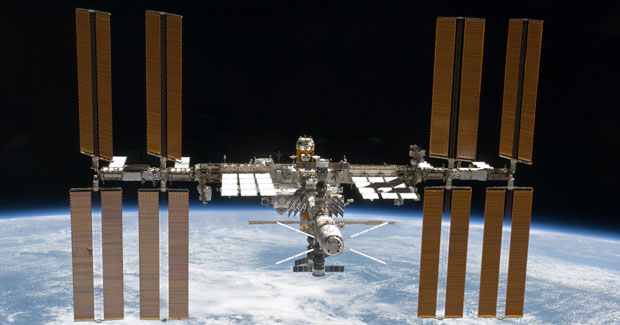 NASA has studied the microorganisms inhabiting the confined environments of spacecraft for decades, but Jaing’s project, called Microbial Tracking-2 (MT-2), is more ambitious in breadth and depth than previous endeavors. Past assessments have only examined subsets of the microbiome. The recently concluded MT-1 experiment, for instance, explored the types of microbes present on the surfaces and in the air of ISS over a one-year period. MT-2 goes further by studying microbial populations of the astronauts as well as those in the station environment. “We are conducting the first study that looks at the crew and environment together in a comprehensive and integrated way,” says Jaing. In addition, MT-1 cataloged only bacteria and fungi, whereas this study also considers viruses, which Jaing says “are somewhat under-studied” in space. “We can provide countermeasures once we know what astronauts are breathing in and breathing out,” adds JPL’s Kasthuri Venkateswaran. “Beyond the microbes affecting the crew, we need to know what microbes are in the environment and riding on the cargo.”

So far, four astronauts from three countries are participating in MT-2. As part of the project, each astronaut collects saliva, nasal, mouth, and skin samples several times before, during, and after their time on ISS. They also gather ISS surface and air samples from various locations. The astronauts’ missions to ISS overlap, enabling continuous monitoring of ISS over an 18-month period. Throughout that time, the researchers can explore the evolution of each astronaut’s microbiome and that of the station as a whole as well as how the two interact. For instance, do microbes living in the air of ISS eventually become part of the astronauts’ nasal microbiome? If so, do they then pose a health risk to crew members’ health by displacing existing beneficial nasal microbes?

As part of the analysis, the researchers will compare microbiome data (hygiene and health samples from the crew) with environmental data (temperature and humidity inside the station) to better understand why changes in the microbiome occur. The team suspects that individual samples from the astronauts will contain distinct collections of microbes that are likely to be affected by different environmental factors associated with space travel. Skin microbes are expected to be more susceptible to space radiation, for example, while microorganisms in the mouth may be influenced by changes in an astronaut’s diet. Data gathered from MT-2 will be shared with the scientific community through an open-access NASA database, called GeneLab, and will serve as a baseline for studies of the microbiome.

Each of the institutions involved in MT-2 will analyze a portion of the samples. Researchers at Johnson Space Center are evaluating viruses and determining which viruses might be harmful to the crew. JPL scientists are performing microbiological analysis, using traditional culturing techniques and DNA sequencing to ascertain which bacteria and fungi are present and alive. However, less than 10 percent of microbes can be cultured. Therefore, Jaing, Be, and their Livermore colleagues are using complementary molecular detection methods to ensure the entire array of organisms represented in the samples is cataloged and studied. A primary focus is identifying virulent or antibiotic-resistant genes in the samples.

A key weapon in their analysis arsenal is LLMDA, a DNA-based detection system developed in 2008 that can rapidly and simultaneously identify all the sequenced microorganisms in a sample, even new microbes containing DNA sequences previously identified in other pathogens. (See S&TR, April/May 2013, A Faster and Cheaper Method to Detect Agents of Disease.) “The Livermore array provides approximately 50- to 100-fold greater coverage of microbes than culturing, and it can process samples in about one day,” says Jaing. 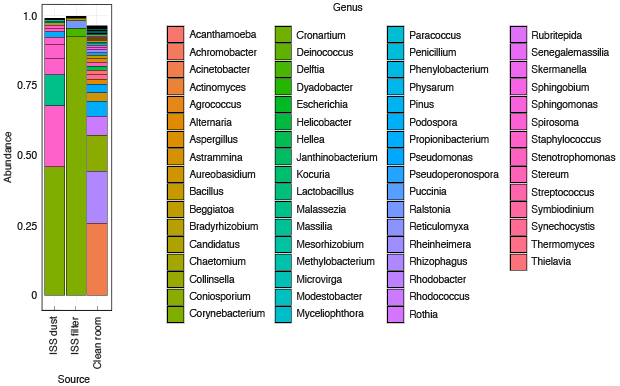 The array contains nearly 400,000 probes—short, synthetic, single-stranded DNA sequences—arranged in a checkerboard pattern on a small glass slide. When a fluorescently labeled fluid sample containing the genetic material from the microbes contacts the probes, squares with genetic material matching those in the samples are activated. The activated squares produce a fluorescent pattern from which the species, or sometimes even the subspecies, present in the sample can be identified. Then, with the Livermore Metagenomic Analysis Toolkit (LMAT), the researchers can dig deeper into the data. (See S&TR, October/November 2015, Two-Part Microbial Detection Enhances Bioidentification; and S&TR, December 2010, Quick Detection of Pathogens by the Thousands.) LMAT’s open-source software efficiently searches through genetic data cataloged in public repositories to more specifically identify organisms in ISS samples. By comparing gene database information with the species and genes identified in the sample, the researchers can then pinpoint genetic mutations, including those that have caused a species to become more virulent (producing a more severe illness in its hosts) or more resistant to antibiotics.

The first set of crew-derived and environmental samples (76 in total) for MT-2 was retrieved in July 2017 on a SpaceX capsule—the second-ever flight by a private company to reach ISS and return to Earth successfully. Analysis of these and subsequent samples is ongoing. However, Livermore and JPL scientists have provided the scientific community with a “sneak peek” of what their powerful combination of characterization and bioinformatics techniques can offer by testing their processes on previously collected environmental samples from ISS and an Earth-based clean room. 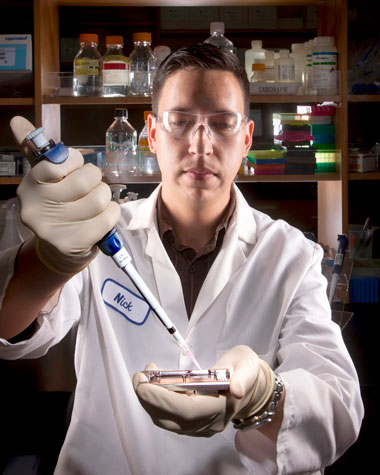 Nicholas Be (left), together with Crystal Jaing and colleagues from Lawrence Livermore and three NASA research centers, are using the Lawrence Livermore Microbial Detection Array to study microorganisms found aboard ISS. (Photo by Randy Wong.)

“It’s clear from our analysis that the ISS microbial population profile is distinct from that of the clean room,” says Be. The team found more evidence of bacteria and fungi relating to human occupation (such as those that cause staphylococcus infection and acne) in ISS environmental samples than in the clean room. The team suspects that although a larger number of people spend time in the clean room than on ISS, access to conventional cleaning materials and adherence to rigorous hygiene protocols reduces contamination in the clean room microbiome. Overall microbial diversity was also lower in the ISS relative to clean room samples, and as anticipated, the team observed more examples of resistant and virulent gene sequences in the ISS.

Having shown that their analysis techniques can achieve thorough results, the researchers have begun applying these methods to the MT-2 samples. This work will provide insight into how humans and microbes influence one another and are influenced by the crowded, complex, yet isolated spacecraft environment. NASA can also use MT-2 data to perform a risk assessment of potential pathogens, determine the level at which they could become a threat to the astronauts, and develop strategies for eliminating or treating the microbes. In the coming years, NASA and its research partners could develop capabilities that would enable crew members to perform microbial characterization while in space—for instance, on the way to Mars. All of these efforts serve the goal of ensuring that astronauts, together with a beneficial mix of microorganism populations, thrive as they continue to venture farther from home for longer periods than ever before.