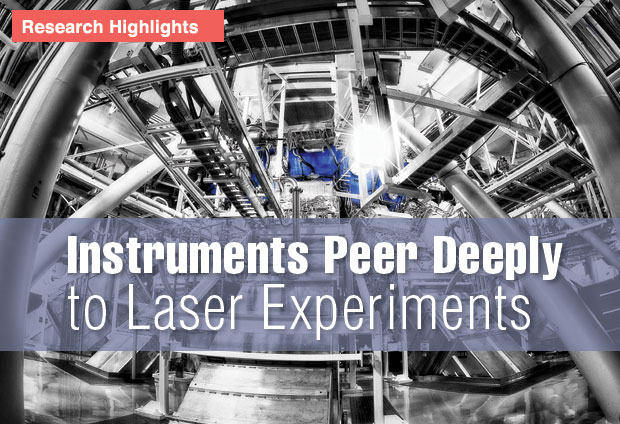 At the National Ignition Facility (NIF), more than 70 diagnostics are located inside and outside the target chamber (blue sphere) to collect data on laser experiments. (Photo by Damien Jemison.)

Inside the 192-beam National Ignition Facility (NIF)—the world’s largest and most energetic laser—researchers study materials under extreme pressures, temperatures, and densities and capture the resulting data with high-resolution diagnostic instruments. NIF provides an unprecedented capability for conducting such experiments, which help to validate simulations of nuclear weapons performance and explore a range of scientific fields, from astrophysics and materials science to nuclear science and national security applications. In addition, many NIF shots focus on advancing the prospect of inertial confinement fusion (ICF).

Experimenters rely on an array of nuclear, optical, and x-ray diagnostic instruments to record vital data from NIF shots at micrometer length scales and picosecond (trillionths of a second) timescales. In addition, a suite of diagnostics provides critical data on the laser facility’s performance. Diagnostics are either deployed to a fixed location in the target chamber or fielded on a diagnostic instrument manipulator (DIM), a telescopic device for inserting, retracting, and positioning instruments inside the target chamber.

More than 70 diagnostic systems are available to experimenters, according to Livermore physicist David Bradley, who leads a group focused on developing and deploying advanced diagnostics and measurement techniques at NIF. Indeed, the necessity for accurate and reliable diagnostics continues the motivation to create ever-better instrumentation. Bradley notes that experimental results and new types of experiments can suggest improvements to existing diagnostics or the need for entirely novel devices that take advantage of electronic and optical advancements.

The National Diagnostic Working Group involves more than 100 researchers from Lawrence Livermore and Sandia national laboratories, the University of Rochester’s Laboratory for Laser Energetics (LLE), the Massachusetts Institute of Technology, General Atomics, Princeton University, and other leading research centers that design and build advanced diagnostics. Initial tests of a new device are first tested at facilities smaller than NIF, such as LLE’s Omega Laser Facility or the Jupiter Laser Facility at Livermore. In addition, all instruments must undergo a series of design and safety reviews at NIF before their construction begins. Diagnostic development is so important that despite fierce competition among scientists worldwide for experimental time on NIF, the facility reserves laser shots solely for this purpose. As with other shots, these tests must be scheduled 6 to 12 months in advance.

X-ray diagnostics, in particular, provide experimenters with data at the spatial (micrometer) and temporal (picosecond) resolution needed to observe important phenomena that occur during a shot. These instruments measure target self-emission or use x rays generated by a backlighter to probe or radiograph dense matter. As demonstrated by the efforts of two NIF physicists—Sabrina Nagel and Laura Robin Benedetti—designing, building, and testing an x-ray diagnostic is often measured in years, but the payoff is well worth it. Improved diagnostics are key to advancing scientific understanding of how materials respond to high-energy-density environments. 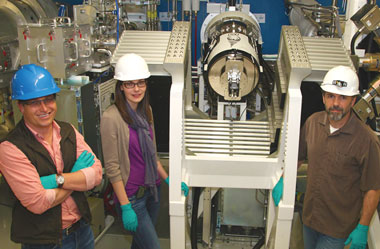 Beginning in 2011, Nagel, an experimental physicist, spent her first three years at Livermore characterizing and calibrating the Dilation X-Ray Imager (DIXI), now used routinely in ICF experiments. DIXI relays information on the temperature, shape, and time history of the central hot spot within the fuel capsule as well as hot-spot nonuniformities during implosion. The instrument was developed by Livermore in collaboration with General Atomics and Kentech Instruments, Ltd., in the United Kingdom.

Based on DIXI’s stellar performance, Nagel has also been helping to develop the single-line-of-sight (SLOS) x-ray diagnostic—a DIM-based instrument that will be located inside the target chamber. This device uses a similar pulse dilation concept to DIXI but features a sensor that contains an extremely fast response CMOS (complementary metal-oxide semiconductor) chip under development at Sandia National Laboratories. The chip allows multiple images to be recorded from a single line of sight compared to the individual image captured by DIXI using pinhole optics. Nagel says, “By coupling SLOS with the Crystal Backlighter Imager (a diagnostic instrument that acts as a narrow-band filter), we expect to see the evolution of the fuel capsule’s shell closer to ‘bang time’ (moment of peak x-ray emission).” 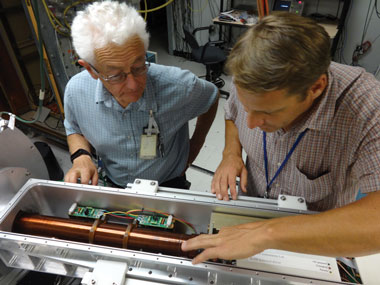 Joe Kilkenny and Terance Hilsabeck, both from General Atomics, inspect the drift tube, a critical component of the single-line-of-sight x-ray diagnostic. The drift tube is analogous to the slow-motion feature on a standard camera. (Photo by Ken Piston.)

X-ray diffraction experiments probe the atomic structure of a material to see how atoms rearrange when they shift from one phase to another and how fast that transformation occurs. Improved time-resolved x-ray diffraction capabilities could enable new materials science experiments that provide information on the phase changes of materials under high pressures. Physicist Benedetti explains that Livermore scientists are interested in phase changes for materials important to stockpile stewardship. The research team will develop the new experimental platform by documenting the transformation of iron’s crystal structure under high pressures, which is particularly relevant to geophysical research. The team includes Benedetti and about 10 other physicists and engineers.

The proposed instrument builds on the success of x-ray diffraction experiments using Target Diffraction In Situ (TARDIS), the first device to include a NIF target and diagnostic instrument on a single, integrated platform. “As I investigated possible strategies for collecting time-resolved diffraction data, I realized we needed something entirely new,” says Benedetti. She decided to adopt a “direct detection” design to capture data using both a streak camera and a time-resolved imaging sensor incorporating four of Sandia’s proposed CMOS chips. The sensors will collect a series of six images to capture phase changes with less than 1-nanosecond temporal resolution. Together, the two instruments will eliminate the need for several NIF shots on the same material by taking multiple measurements within one experiment.

In December 2017, the team conducted a series of proof-of-concept experiments at the Omega Laser Facility that provided information on to how best shield the diagnostic in future design iterations from unwanted background electromagnetic pulses. The team has scheduled an experiment at NIF for September 2018, which will test the latest diagnostic design incorporating the CMOS-based sensor. Benedetti acknowledges that plenty of work needs to be done before the test is conducted.

Scientists at several National Nuclear Security Administration (NNSA) laboratories are following Benedetti’s progress closely. The instrument is considered “transformative” by the National Diagnostic Working Group, meaning it has the potential to transform the experimental capability for critical NNSA needs. 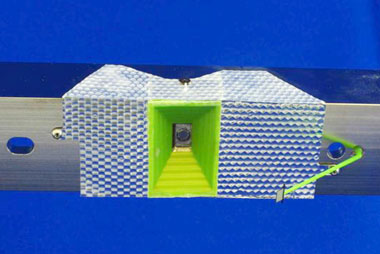 The TARDIS (Target Diffraction In Situ) package is an integrated platform that contains a target and a diagnostic. The package houses a material sample, an x-ray backlighter mounted on a stalk, and a cartridge containing an image plate to capture the x-ray diffraction pattern of the sample.

Whether a principal investigator for a study is from a national laboratory, an international research facility, or a leading university, becoming qualified to conduct an experiment on NIF involves classwork, online guides, and shadowing experienced Livermore colleagues. In many cases, researchers from the Laboratory’s weapons program design the experiments, often focusing on computer simulations to guide the setup and predict results, while physicists from other Livermore organizations focus more on target and diagnostic development.

The efforts of physicists such as Nagel and Benedetti underscore the dedication of experimenters to precisely document the fleeting events taking place during NIF shots to enhance understanding of complex processes and improve scientific capabilities. The richly detailed data that are acquired often lead to important discoveries about the nature of materials under pressure, which in turn strengthen national security and fundamental science and help researchers make further progress toward ignition.