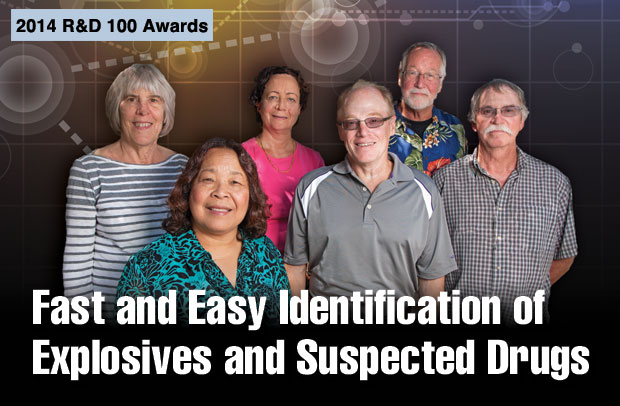 For U.S. troops in combat, accurately identifying the explosives used in a bomb or an improvised explosive device is critical to understanding enemy resources and capabilities. Thanks to an R&D 100 Award–winning technology called microTLC™, a wider range of unknown explosives compounds can be rapidly detected and identified by a simple-to-use, miniaturized, field-portable kit based on thin-layer chromatography (TLC). Livermore chemist John G. Reynolds led the Lawrence Livermore team that codeveloped the breakthrough instrument with Field Forensics, Inc.

The microTLC kit also allows trained nonexperts to quickly separate and identify illicit drugs and cutting agents, and a wide range of other hazardous materials. Users separate unknown target materials with TLC and then identify the unknowns by directly comparing them with extremely small amounts of well-characterized standard compounds that have been pre-applied on 3- by 5-centimeter aluminum plates. The use of small pre-spotted plates coated with absorbent allows the process to be completed within 5 minutes, greatly assisting first responders and law enforcement in the unequivocal identification of suspect materials in record time.

MicroTLC is the latest commercial product to stem from Livermore explosives detection expertise. E.L.I.T.E.™ (Easy Livermore Inspection Test for Explosives) was honored in 2006 with an R&D 100 Award. The E.L.I.T.E. detector weighs less than 30 grams, fits in a shirt pocket, and is sensitive to more than 30 different explosives. (See S&TR, October 2006, Pocket-Sized Test Detects Trace Explosives.) During the same period, a field kit was developed based on TLC to identify a comprehensive list of explosives and their precursors. “Our field kit did an outstanding job, but it was cumbersome and heavy,” says Reynolds. “Our goal was to develop a more portable kit that also would be user friendly and work extremely fast.” The result is a compact laboratory for quick, accurate, and inexpensive analysis.

Reynolds notes that TLC is a long-standing technique used to separate mixtures of substances into their individual components. The technique is known for its simplicity, low cost, accuracy, and sensitivity. In this technique, an unknown compound is identified by comparing the distance it travels in the TLC system with that traveled by a reference compound (standard). The many advantages of TLC are incorporated into the lightweight (less than 1 kilogram) and rugged microTLC kit, making it ideal for the rapid identification of unknowns in the field.

A user first dissolves a sample of unknown material in a solvent enclosed in the kit and with a pipette applies a drop onto one of the commercial pre-spotted plates. The plate is then placed in the kit’s developing chamber that contains another solvent suspended in a commercial silica-based thickener. As that solvent migrates on the plate, it separates the constituents of the sample. A battery-operated fan dries the plate within 15 seconds of its development. The plate is then examined under ultraviolet (UV) light in the imaging chamber. To identify the suspect materials, the user compares the distance the unknowns traveled with the distance traveled by the reference materials. From start to finish, the spotting process takes less than 5 minutes, and the plate development requires less than 3 minutes. Neither calculations nor operator interpretation are needed, and step-by-step on-screen instructions are provided.

The small plates drastically reduce separation times as well as the amount of solvent required to develop the plates. Including pre-spotted standards reduces identification time, because the reference materials are already located next to the unknown on the separation plate. An innovative aspect of the microTLC kit is the developing solvent suspended in a slurry, which makes handling the plates safer and more user-friendly, while reducing waste.

All the items needed to detect and identify the unknowns are contained in the microTLC kit, including the UV light source and a digital video camera for plate analysis and record management. A battery pack is also included to ensure extended operation in the field. In addition, resupplying the materials, such as the pipettes and TLC plates, is inexpensive compared with other identification systems. 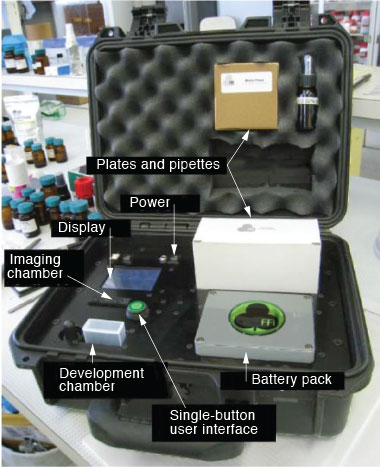 All of the components required to detect and identify unknown materials are contained in the microTLC™ kit. The small size and ruggedness of the kit permits easy field use as well as rapid identification. In the developing chamber, the spotted plates are mixed with solvent, separating the unknowns. In the imaging chamber, the developed plates are read, and results appear in the display window. The battery pack powers a fan to dry the developed plates and an ultraviolet lamp for reading them.

With its small size, ease of operation, light weight, and ruggedness, the microTLC kit lends itself to field use much more so than conventional methods such as mass spectrometry and molecular spectroscopy. The principal application for the kit is military monitoring of explosives. For detecting and identifying military explosives, the plates are pre-spotted with explosives standards such as TNT (trinitrotoluene), tetryl, picric acid, RDX (1,3,5-trinitro-1,3,5-triazacyclohexane), and HMX (1,3,5,7-tetranitro-1,3,5,7-tetrazacyclooctane), thereby eliminating the need to apply these standards in the field. The pre-spotted plates remain viable for more than one year. The kit operates the same for detecting and identifying illicit drugs, but the plates are pre-spotted with illicit drug standards.

The microTLC kit is exceptionally sensitive. Following the detonation of an explosive device, the instrument can detect residue measuring a few nanograms (billionths of a gram). For suspected drug trafficking, swiping a door handle for residue may well provide enough material for comparison to a known standard and unequivocal positive identification. Reynolds says, “With its extremely low power requirements, low cost, and ability to work in conditions not typically conducive for laboratory equipment, the microTLC kit has greatly advanced our ability to quickly detect and accurately identify a wide range of hazardous materials in the field.”