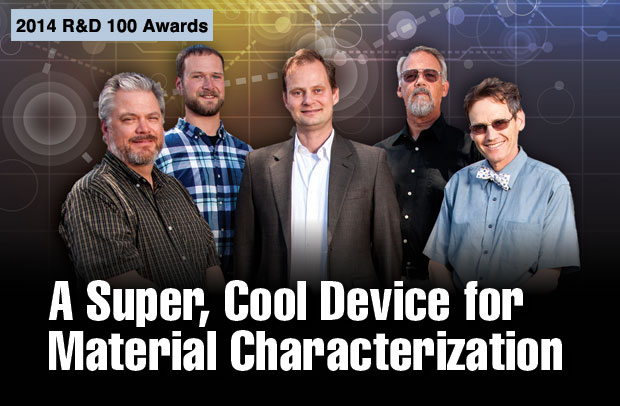 The color of an object reveals some details about its composition. For instance, gold is distinguishable from silver because of its yellow hue. But to determine an object’s exact elemental and chemical makeup, researchers require an in-depth technique such as x-ray spectroscopy. With this method, x rays or high-energy electrons excite a sample, causing the sample to emit x rays whose energy, or color, spectra are specific to each element within the sample, similar to an “x-ray fingerprint.” Semiconductor-based x-ray detectors, also called energy-dispersive spectrometers, are the most widely used instruments for x-ray spectroscopy because these inexpensive devices are easy to use and provide results quickly. However, their relatively poor energy resolution can make it extremely difficult for x-ray measurements to distinguish different elements, especially at low energies or in samples with multiple elements. Wavelength dispersive x-ray spectrometers, which use crystals and gratings to obtain a complete x-ray spectrum, provide excellent energy resolution. However, their complicated operating requirements are time-intensive, difficult to perform, and more susceptible to systematic errors.

The superconducting tunnel junction (STJ) x-ray spectrometer, an R&D 100 Award–winning technology, bridges that gap between efficiency and resolution, offering 10 times higher accuracy in a user-friendly format. The higher resolution allows for the clear separation of characteristic x-ray lines even at low energies and in complicated multi-element samples, which is beneficial for technological, medical, and forensic applications. Lawrence Livermore partnered with STAR Cryoelectronics, LLC, to codevelop  this technology. 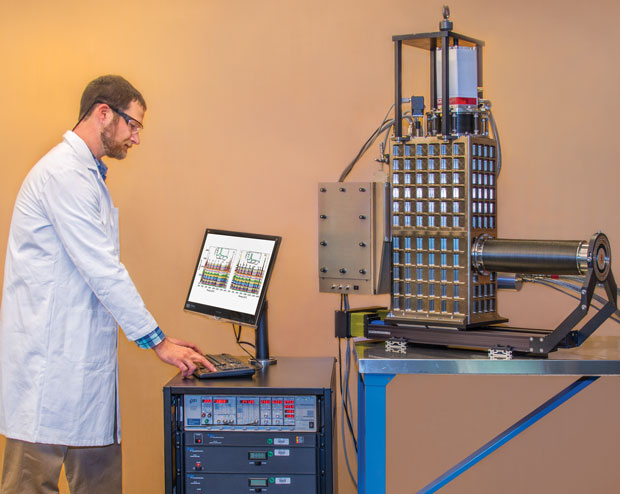 Carpenter analyzes high-resolution spectra from the STJ x-ray spectrometer (shown on the table) to characterize a material sample. The rack contains the support electronics for spectrometer operation. (Photo by Roy Kaltschmidt of Lawrence Berkeley National Laboratory.)

The STJ x-ray spectrometer operates similarly to conventional silicon-based systems, wherein x-ray absorption by the sensor excites a number of free charges above an energy gap, and the temporary increase in the current provides a direct measure of the x-ray energy. The difference is that superconductors, such as those in the STJ x-ray spectrometer, feature an energy gap of just about 1 millielectronvolt compared with the 1,000 times larger 1-electronvolt gap in semiconductors. As a result, with the same energy, an STJ x ray excites 1,000 times more free charges in the superconductors, which in turn improves the energy resolution of the x-ray spectra by a factor of about 30.

Superconductor-based systems require refrigeration mechanisms that can keep temperatures low enough to suppress thermal leakage currents, which reduce the accuracy of the energy data. The cooling medium is typically liquid nitrogen or helium. However, the cost and difficulty of working with these materials has limited the use of superconducting systems to the scientific community. “To make this technology commercially viable and accessible to nonexperts, we developed an automated liquid-cryogen-free refrigeration system that allows for the operation of the instrument at 0.3 kelvins, low enough to suppress thermal leakage currents in the superconducting material,” says physicist Stephan Friedrich, who led the Livermore team.

A two-stage pulse tube refrigerator precools the sensor to 3 kelvins. From there, a two-stage adiabatic demagnetization refrigerator allows the system to attain a base temperature of less than 0.1 kelvins. The refrigeration system uses a long, shielded “cold finger” so that the sensor can operate within 2 centimeters of a room-temperature sample, while maintaining a temperature below 0.3 kelvins. “The system is fully automated,” says Friedrich. “It can be cooled with the simple push of a button.”

Superconducting x-ray detection technologies have been used for about two decades for scientific applications. One limitation of all superconducting x-ray sensors is that they are intrinsically small. Their tiny size affects the efficiency with which they can detect x rays from a sample, thus increasing the time required to acquire data for a complete x-ray fingerprint. The award-winning team has solved this problem by configuring detector arrays that can be added for even higher detection efficiency and faster detection speed. The entire superconducting sensor uses arrays of up to 112 high-quality tunnel junctions made from tantalum and aluminum.

The quality of a tunnel junction is dependent on producing an insulating ultrathin aluminum oxide tunnel barrier without any pinholes. Such defects increase the leakage current and thus the electronic noise in the detector. “STAR Cryoelectronics has optimized the sensor fabrication process and developed tunnel junctions with very low leakage current,” says Friedrich. The photolithographic fabrication process reproduces the requisite hundreds of sensors needed for the arrays. “With our sensor arrays, we have increased detection efficiency and reduced data-acquisition time by more than a factor of 100.”

From Lab to Market

The improved precision of the STJ x-ray spectrometer, along with its ease of operation, will make high-accuracy x-ray fingerprinting available to commercial users. During production, computer-chip manufacturers will be able to detect ever-smaller impurities that affect production yield. Biomedical companies will be able to detect lower concentrations of toxic metals in their samples. And forensic specialists could use the device to identify smaller traces of evidence from crime scenes.

Says Friedrich, “It is gratifying to see technologies we develop at the Laboratory successfully make the transition into commercial applications for use by the general population.” The STJ x-ray spectrometer provides a more effective way to characterize samples, which can lead to technological, environmental, and medical benefits.