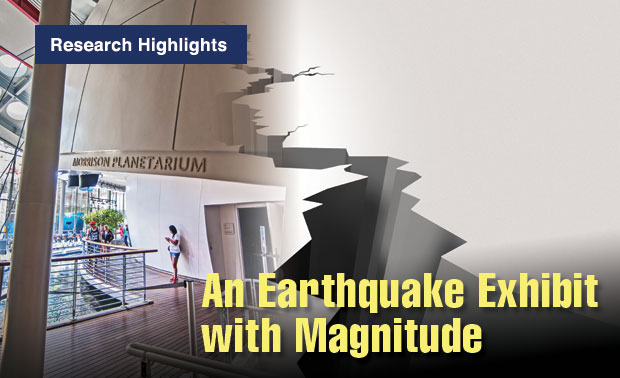 At the California Academy of Sciences’ Morrison Planetarium, an immersive, 27-meter-diameter dome theater currently features an award-winning half-hour film on earthquakes that was produced using scientific data from an array of institutions, including Lawrence Livermore.

As residents of the nation’s most seismically active state, most Californians view earthquakes with a mixture of fear and fascination. A major exhibit by the California Academy of Sciences in San Francisco, incorporating Lawrence Livermore simulation data, aims to replace the fear with understanding and even respect for how seismic forces shape the local and global landscape.

Creating an engaging yet scientifically accurate exhibit was the chief priority for the Academy’s exhibition and visualization experts. “Earthquake: Evidence of a Restless Planet” was produced in collaboration with scientific and science education advisory panels and nearly 100 contributors from research institutions, including the U.S. Geological Survey (USGS), the University of California at Berkeley, and Lawrence Livermore. The core of the exhibit is a half-hour film presented in the Academy’s Morrison Planetarium, the world’s largest all-digital full-dome theater. The film incorporates striking visualizations of earthquakes, tsunamis, and tectonic plate evolution. “Our all-digital planetarium has the capability of presenting complex topics—such as earth processes and the slow march of geologic time—within a very visual, immersive environment,” says Ryan Wyatt, planetarium director and head of the Academy’s visualization studio, where the film was developed.

One goal in making the film was to teach the public that scientists use not only field observations but also models and simulation to understand Earth’s behavior. The scientific filmmakers were eager to showcase real simulation data whenever possible. “Earthquake” features 20 visuals generated directly from scientific data, more than any previous Academy film. Some visualizations were drawn from Lawrence Livermore seismic research such as accurate ground-motion simulations for two major earthquakes (one historical and the other hypothetical), simulations of seismic waves traveling through Earth, and a temperature map of Earth’s interior based on global seismic-wave imaging. Laboratory seismologist Arthur Rodgers led the Livermore “Earthquake” collaboration team, which included Christina Morency, Nathan Simmons, Anders Petersson, and Bjorn Sjogreen.

Lawrence Livermore collaborated with the California Academy of Sciences to produce an engaging earthquake exhibit at the Academy that combines Livermore seismic research and the latest data-driven visualization techniques.

How to Draw an Earthquake

“When we started on the project,” says Tom Kennedy, the film’s producer, “we didn’t realize the many different ways in which the data could be visualized. Through the input of the production team and focus groups, we found that some visualizations were misleading to people not versed in the dynamics of earthquakes, even though the visualizations made complete sense to scientists who were experts in the field.” To avoid confusing or potentially alarming viewers, the filmmakers opted against showing an exaggerated distortion of ground velocity or displacement on a regional-scale map.

The Livermore team re-ran calculations from previous research efforts (see S&TR, September 2006, Re-creating the 1906 San Francisco Earthquake), with some enhancements, to create even more accurate simulations that met the Academy’s needs and scales. As an example, for regional-scale visualizations of San Francisco’s 1906 magnitude 7.8 San Andreas Fault earthquake and a hypothetical magnitude 7.0 earthquake on the nearby Hayward Fault, the filmmakers and Livermore scientists focused on displaying two variables to which a general audience would relate—slip on the vertical fault plane and shaking intensity on Earth’s surface. The Academy team used color intensity, rather than actual or exaggerated motion or displacement, which transformed the detailed simulation results into an intuitive and visually compelling animation.

Matt Blackwell, Academy studio technical director and data manager, says, “A key theme of the show is that an earthquake has many effects, from local to global, both on the surface and inside the planet. The Livermore team was able to run simulations customized to our needs that show the 1906 San Francisco earthquake at many levels of detail and scales, with a continuous camera move from a local street view to a global level.” A single shot early in the film, presenting the science behind the 1906 earthquake, integrates high-resolution photography, six simulations, and a historically accurate city model based on photographs, insurance maps, and personal accounts.

(left) A dome show visualization (courtesy of the California Academy of Sciences) of a hypothetical magnitude 7.0 earthquake along the Hayward Fault is derived from (right) a Livermore simulation of horizontal ground motion generated by Michael Loomis and Rich Cook. The Hayward Fault represents the highest hazard of all San Francisco Bay Area faults.

Seismic-wave research is a core competency at Livermore. While most often associated with earthquakes, the research has many other applications of national interest, such as nuclear explosion monitoring, explosion forensics, energy exploration, and seismic acoustics. When studying seismic waves, Livermore scientists rely on two programs that run on powerful supercomputers—the Wave Propagation Program (WPP) for local- to regional-scale simulations and SPECFEM3D_GLOBE for global-scale simulations.

WPP uses three-dimensional models of the local geology and topography and the structure of the fault. Says Petersson, the program’s creator, “WPP can work with any material model, of any size, as long as it fits on the computer.” Because the speed of seismic waves largely depends on the rock types through which they travel, knowledge of regional geologic structure helps scientists determine when and how strongly a quake is felt at a given location. Regional-scale WPP simulations for the Academy collaboration, for instance, illustrate that even though the 1906 quake initially ruptured just west of San Francisco, surface-shaking intensity was highest some distance north of the city because of the amount of slip and the local geology.

SPECFEM3D_GLOBE, a code that accounts for Earth’s spherical geometry and three-dimensional variations in seismic properties and topography, simulated ground motion and seismic-wave propagation during the 1906 earthquake on a larger scale. Researchers ran two calculations for the Academy project using this code—one for surface motion and one for seismic waves penetrating deep into Earth’s interior. In the resulting visualization, filmmakers superimposed mantle temperature data provided by Simmons onto a slice of the interior wave simulation. Simmons used the Livermore-developed Earth model LLNL_G3D, which is an image of a large-scale geologic structure generated by analyzing the arrival times of millions of seismic waves passing through Earth. (See S&TR, March 2009, Sleuthing Seismic Signals.) Displaying mantle temperature variations in the film helps illustrate another important point. Rodgers explains, “Earthquakes and other kinds of geologic activity are primarily caused by the motion of plates near the surface as they are pulled and pushed by mantle convection. These motions in the mantle are the result of heat trying to escape from Earth.”

For the Academy effort, Livermore researchers simulated the San Andreas and Hayward fault events at high resolutions. Such calculations require significant computational resources. For the 1906 regional WPP simulation, for instance, simulating 125 seconds of ground motion required over 1 billion grid points, 10,000 time steps, and 7.5 hours of processor time on 2,048 cores of Livermore’s Sierra machine. Thanks to refinements made over the past few years to a USGS three-dimensional subsurface model and to WPP, the simulation included for the first time the effects of realistic topography as well as geologic composition. This combination resulted in much more accurate estimates of ground motion on the area’s hillsides and other susceptible areas. Eleven million velocity components on the surface are used to derive shaking-intensity information for each time step.

In the global SPECFEM3D_GLOBE calculation, the researchers had to split up the seismic-wave calculation for a one-sixth slice of Earth into several segments, because the full calculation generated data more quickly than Sierra’s sizable parallel file system could handle. In total, simulations for the exhibit required over 30,000 computational hours on Laboratory supercomputers. 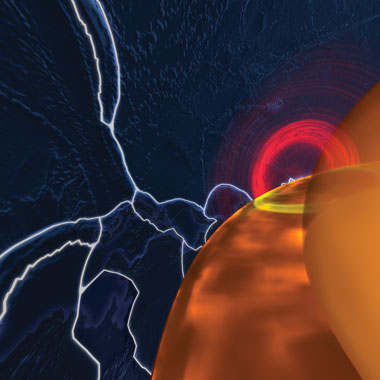 In the “Earthquake” show, a digital re-creation of San Francisco’s 1906 earthquake incorporates a unique perspective of the event from within Earth, looking up at the surface (dark blue, with tectonic plate boundaries shown in white). The Academy’s three-dimensional visualization illustrates seismic waves traveling along Earth’s surface (red) and through the mantle below (yellow). The dark gold area is a cross section through the mantle along the San Andreas Fault, while the lighter gold region at far right is the core. (Visualization courtesy of the California Academy of Sciences.)

Incorporated into the Academy visualization above is research by Livermore scientists such as (left) wave propagation calculations for a cross section through the mantle along the San Andreas Fault and (right) mantle temperature predictions.

Making Waves with the Exhibit

During the 17 months of film production, the Academy’s visualization experts processed 175 terabytes (175 quadrillion bytes) of digital information; the Livermore contribution alone constituted gigabytes of data. The Laboratory exchanged data with the studio in a variety of formats, but the production team often worked directly with Livermore’s raw data. The filmmakers used custom scripts to translate most of the data into a form compatible with the visual effects software Houdini.

Once in Houdini, the data were manipulated as needed and exported typically as a set of textures. These textures were mapped onto the fault plane, planetary surface, or other relevant geometry and rendered using the shot camera. Each step in the production process required close collaboration between the filmmakers and scientists to ensure scientific accuracy.

Livermore contributions are also featured in the exhibit that accompanies the film and reinforces many of its themes. Visitors entering a 7.5-meter-high model of a slice of Earth (to scale) look up to see the mantle and core with the mantle textured using the same temperature data supplied for the planetarium show. Livermore seismic-wave calculations power an interactive screen displaying worldwide seismic activity. In addition, an earthquake simulator and stations on topics such as earthquake preparedness incorporate feedback from Livermore researchers.

The exhibit and film, which debuted in 2012, already have been seen by over half a million people, boosting the scientific literacy and earthquake preparedness of Bay Area residents and visitors alike. Audience response has been positive, and the film has received recognition for its outstanding special effects from the international Visual Effects Society. The Academy will feature “Earthquake” through 2014, and the film component will be licensed to other museums and planetaria worldwide; the studio’s previous in-house productions are currently showing at dome theaters in eight countries.

Through the efforts of Livermore animators Michael Loomis and Rich Cook, graphics and animations based on the same data sets now grace the Laboratory’s powerwalls and flat screens as well. The Livermore researchers are pleased to see their results transformed into stunning visuals and shared with a broad audience. Bill Goldstein, the Laboratory’s deputy director for Science and Technology, adds, “This partnership with the California Academy of Sciences allowed us to help educate and inform the public about the fascinating and important study of earthquakes, while showcasing the Lab’s unique contributions to the study of seismic activity.” 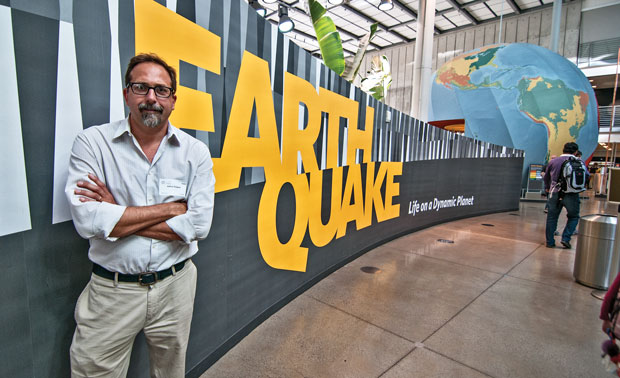