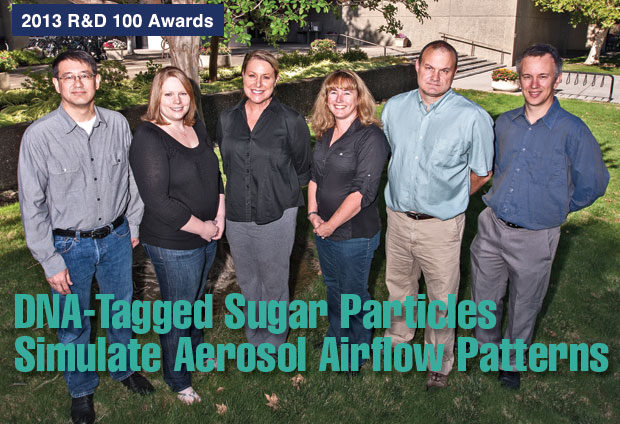 Chemicals mold, and biological pathogens are often common constituents of the air we breathe at the home or office, in public places such as subway stations and restaurants, and on airplanes. Indeed, one of the most overlooked threats to human health is poor indoor air quality, often termed “sick building syndrome.” Experts have long searched for a safe and reliable method to improve understanding of airflow and the transport of airborne particles.

In response to this pressing need, a team of Livermore scientists and engineers has developed a safe and versatile technology for tracking airflow called DNA-tagged reagents for aerosol experiments (DNATrax). The DNATrax development effort, funded by the U.S. Defense Threat Reduction Agency, was led by physical chemist George Farquar. The patented technology combines Food and Drug Administration– (FDA-) approved foodstuffs, such as sugar, and a unique DNA bar code to produce microparticles that can be used to track and quantify airflow in both indoor and outdoor venues. Potential applications include indoor air-quality detection for homes, offices, ships, and airplanes; urban particulate tracking for airports, convention centers, and subway and train stations; and tracking of environmental releases such as carbon dioxide. DNATrax, an R&D 100 Award–winning technology, is the first rapid and safe method to simulate aerosol particles that are easily inhaled.

Indoor air pollutants can include biological agents such as molds, bacteria, viruses, pollen, animal dander, and dust mites. Other common pollutants are sources of combustion products, such as tobacco smoke and wood-burning stoves, and chemicals used to manufacture building materials and household products, such as formaldehyde and asbestos. All of these contaminants “pool” in spaces having inadequate ventilation, with detrimental effects to building occupants. “Without adequate airflow, harmful pollutants can become concentrated and make us sick,” says Farquar.

Pinpointing the areas where pollutants stagnate requires knowing how air flows in a given space. With this knowledge, airflow patterns could be adjusted to help improve building occupants’ comfort and health. In addition, this knowledge could be used to strengthen chemical and biological defenses in buildings and ships by optimizing the locations of specialized detectors.

Successful Tests at the Pentagon

DNATrax offers a cost-effective and environmentally friendly diagnostic tool that can simulate a wide variety of aerosols. The technology has been used to model airflow in several enclosed spaces. In November 2012, a series of tests was successfully conducted at the Pentagon in conjunction with the Pentagon Force Protection Agency. Sets of different microparticles, each with a unique DNA segment (or bar code), were released in corridors and detected by both Pentagon and Livermore detectors. The tests enhanced the team’s understanding of indoor airflow created by heating, ventilation, and air-conditioning systems.

DNATrax microparticles are produced by combining FDA-approved DNA bar-coded material in an aqueous solution. The mixture is then formed into droplets using either a modified ink-jet printer or a spray dryer. The resulting dried particles measure from 1 to 10 micrometers in diameter. The particle size can be adjusted for a particular application (to simulate a selected pathogen, for example) by changing the composition of the solution.

The bar codes comprise about 100 DNA bases of synthetically produced nucleic acid copied from genes unique to a deep-sea organism. The particular sequence of DNA bases can be varied to create a nearly unlimited variety of test particles. This organism was chosen because its DNA would be extremely unlikely to be detected in an office environment. The concentration of DNA used ensures that one or two copies are present in each microparticle. Particles may also be mixed with fluorophores that fluoresce under certain wavelengths of light.

Once an aerosol generator releases DNATrax microparticles, they can travel tens of meters depending on their size. The microparticles are collected by swipes or air filters and detected and counted using polymerase chain reaction (PCR) technology, or in the case of particles containing fluorophores, fluorescence particle spectroscopy. 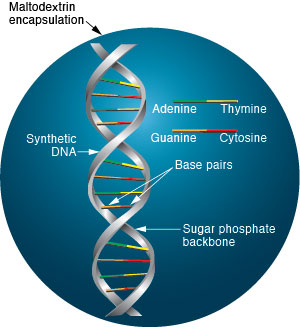 Microparticles used in DNATrax are composed of sugars approved by the Food and Drug Administration for food production.

Farquar notes that other products on the market for tracking airflow, such as natural and genetically modified spores, can be expensive. They can also face significant regulatory and public perception barriers before being released in public places. Furthermore, once released, these spores must be removed, making the release site temporarily unavailable and limiting additional testing. Full decontamination can take days to complete. In contrast, DNATrax particles are biodegradable and nontoxic.

DNATrax also allows for simultaneous or repeated releases in a short time, which sharply reduces the costs associated with conducting tests. Several particle varieties can be released in a facility at the same time and still be identified through their DNA bar codes. No decontamination between releases is needed. In 2012, two different bar-coded particles were simultaneously released from neighboring locations. Using PCR, the two types of particles were easily differentiated, and their concentrations were measured as a function of the distance from their respective release points.

Farquar predicts DNATrax will revolutionize the science of detecting and tracking the flow of particulates and airborne contaminants. In addition, the novel, safe, and cost-effective technology should lead to advances in biology, environmental science, and fluid dynamics.