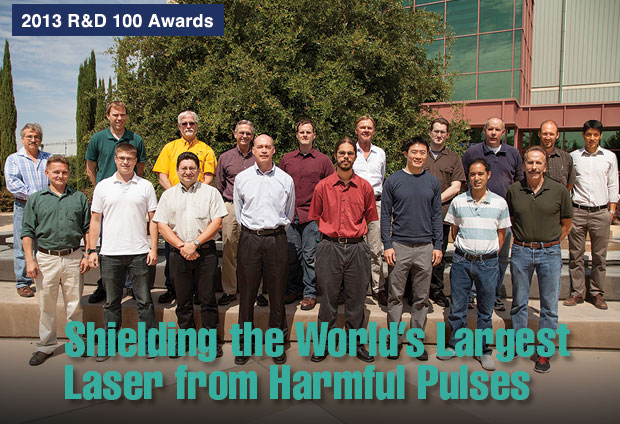 Operating the National Ignition Facility (NIF) presents many challenges, not the least of which is maintaining safe operating conditions for expensive laser amplifiers, mirrors, and other optical devices. The process of screening energetic laser pulses to avoid harming optics has often taken up to a day. As NIF evolves into a more dynamic facility with added flexibility in laser power and operating wavelength, reducing the time needed to screen these pulses is critical.

The Danger of Powerful Beams

High-energy laser facilities such as NIF have become modern workhorses for scientific discovery in such disciplines as astrophysics, materials science, nuclear science, and particle physics. NIF is a critical experimental tool for the National Nuclear Security Administration’s mission to ensure the continued safety, security, and reliability of the nation’s nuclear weapons stockpile.

The beams of light at NIF and other high-energy lasers are so powerful that they must be “conditioned” with an invisible frequency modulation (FM) to protect the laser system’s valuable optics from harmful acoustic waves and hot spots. Equally important, steps must be taken to ensure that FM does not convert into a large and fast ripple on the pulse shape called amplitude modulation (AM). This transformation can result from spectral profile changes that occur during adjustments to laser characteristics, such as operating wavelength and power, or after routine maintenance of optical components. If left undetected, AM on laser pulses may become harmful—exceeding safe levels near the target optics where pulse intensities are the strongest. AM must be periodically checked throughout the facility to ensure that laser pulses conform to safe operating conditions.

Prior to the development of Laser SHIELD, NIF operators used a manual process to screen for the presence of fast-pulse ripple at 48 checkpoints. The process required moving recording equipment from location to location throughout a facility the size of three football fields. In the past, NIF’s operating conditions have been relatively static, requiring infrequent screening. Recently, however, NIF has transitioned into a more dynamic facility with added flexibility in power and wavelength. Much more frequent screening will be necessary to safeguard the laser.

“Today,” says Chou, “the NIF team can monitor AM quickly and easily. The push of a button allows a single oscilloscope to simultaneously measure AM levels from 48 checkpoints throughout the NIF facility.” 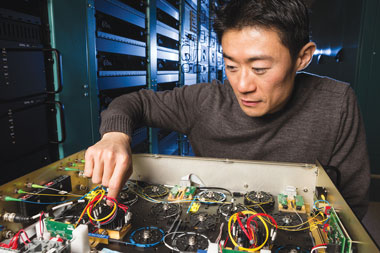 Livermore optical scientist Jason Chou looks over the Laser SHIELD device. In the past, operators needed up to 12 hours to manually screen 48 critical checkpoints for harmful laser pulses at the National Ignition Facility. With Laser SHIELD, the screening can be done in less than 1 second and at the push of a button.

Laser SHIELD’s high-throughput screening system is built entirely from low-cost, commercially available components found in the telecommunications industry. The all-fiber design makes it amenable to the unique needs of high-energy laser facilities. The fibers can be routed to intricate checkpoint locations, are immune to electromagnetic interference, and experience very low signal loss even over several kilometers.

The system operates in several steps. The initial step involves “freezing” the pulse shape as close as possible to each screening location. A wideband photodetector converts the light input into an electrical signal and then collects only AM data while rejecting the FM signal. As a result, FM–AM conversion no longer occurs in the new screening process.

Once the pulse shapes are in the electrical domain, they are imprinted onto a laser operating near 1,550 nanometers—a wavelength used by the telecommunications industry—using a radio-frequency amplifier to boost the signal. Next, optical fibers route pulses away from the checkpoints and ensure the 48 pulses do not overlap in time. When the pulses reach their final destination in the control room, a wavelength-division multiplexer combines them. A real-time wideband digitizer with up to 34-gigahertz bandwidth captures all locations in a 5-microsecond, single-shot acquisition. Raw data are processed to compute the AM result. Finally, a self-validation and calibration system ensures optimal performance and reliability over the life of the system.

At any time, a test pulse with predetermined AM can be created and distributed to all photodetectors as described in the initial step. The test pulse then undergoes the subsequent diagnostic steps, and the AM result is validated by comparing it with the predetermined AM setting. If discrepancies arise, an automatic calibration is performed and applied to the data-processing algorithm.

“Laser SHIELD is the first diagnostic of its kind capable of meeting the requirements of a high-energy laser facility,” says Chou. The widespread presence of these laser research facilities throughout the U.S., Japan, China, France, and the United Kingdom is a testament to their invaluable role in research and development.