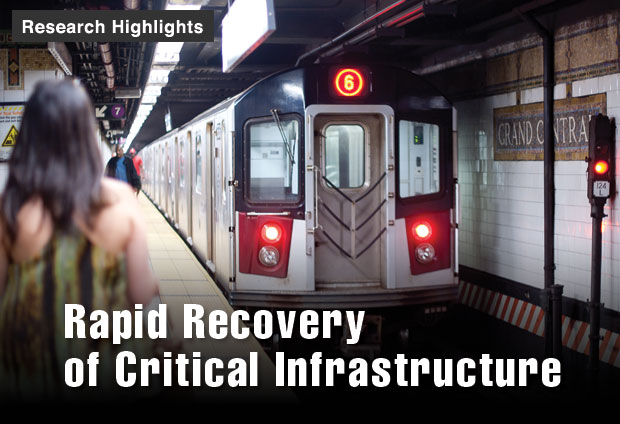 Americans take more than 3.5 billion trips on trains, commuter rails, and subways annually. Because public transportation systems have high traffic, expensive infrastructure, central location in large metropolitan areas or near tourist destinations, and economic importance, they could be likely targets for a terrorist attack.

Many transportation agencies are strengthening their emergency response capabilities to minimize the impact of a chemical, biological, or radiological (CBR) attack and quickly return a system to service. However, the restoration process is complex. First, response teams and laboratories must quickly and accurately collect and analyze hundreds to thousands of samples so they can identify the type of threat agent released and determine the extent of contamination. This phase of the process must then be followed by characterization of the agent, decontamination, and clearance before the system can be reoccupied.

Livermore has played a key role in several projects related to recovering critical infrastructure in the event of a CBR attack. (See S&TR, December 2006, An Action Plan to Reopen a Contaminated Airport.) Funded by the Department of Homeland Security’s Science and Technology Directorate, Livermore has recently been supporting an Underground Transport Restoration (UTR) project to streamline the necessary steps for quickly responding to, remediating, and restoring an underground transportation system. The multilaboratory effort, which also includes Argonne, Sandia, Lawrence Berkeley, and Pacific Northwest national laboratories, as well as the Massachusetts Institute of Technology’s (MIT’s) Lincoln Laboratory, the Environmental Protection Agency (EPA), Bay Area Rapid Transit (BART), and New York City Transit (NYCT), focused on a simulated release of Bacillus anthracis (the bacterium that causes anthrax) using a surrogate material. The anthrax bacterium was chosen because its spores are surrounded by a tough outer shell that make the pathogen one of the most difficult biological agents to inactivate.

The information from this project is being compiled in a first-ever Web-based tool that guides response and recovery personnel through a step-by-step decision tree for bringing the affected transportation system back to full service. To develop the UTR decision framework, the Livermore team, led by Ellen Raber, builds on past experience developing CBR recovery plans and exploits expertise from both the scientific and operations areas at the Laboratory. “I hope all U.S. underground transportation systems—and potentially international systems—can use this framework as an emergency management tool,” says Raber. “Users would have all the information they need compiled in one place prior to and during an emergency.”

The UTR team is collaborating with transportation groups and supporting federal, state, and local regulatory agencies to develop the most rapid and efficient return-to-service strategy possible. Workshops, experiments, and technology demonstrations conducted with these key collaborators have permitted the team to gain specialized knowledge to optimize the recovery strategy. Environmental engineer Sal Mancieri has been responsible for overall coordination among the stakeholders.

One such experiment in the New York City subway examined how a surrogate for B. anthracis might disperse throughout the nation’s largest rapid transit system as a result of a terrorist attack. The Livermore team, led by chemical engineer Elizabeth Wheeler, designed the surrogate material, which was based on the Laboratory’s patented DNA-tagged reagents for aerosol experiments (DNATrax). (See S&TR, October/November 2013, DNA-Tagged Sugar Particles Simulate Aerosol Airflow Patterns.) DNATrax combines food additives approved by the U.S. Food and Drug Administration and unique nonviable DNA bar codes to produce microparticles that simulate biological threats in aerosol form. The UTR team also developed protocols and techniques for analyzing the subway samples and participated in the field experiments.

The field exercises, led by Argonne and MIT’s Lincoln Laboratory, provided the UTR team with insight into dispersion and contamination pathways that allowed the researchers to develop options for quickly determining the extent of contamination and preventing further spread. These data, combined with models and simulations created and run by Argonne, provide transit agencies and response organizations with better tools for pre-planning and for optimizing characterization approaches in the event of an actual biological attack. This information is critical to developing the rapid return-to-service strategy.

(left) When target spores are added to clean samples, they produce clear, distinct microbial colonies that are easy to analyze and identify. (right) When the same amount of spores are added to samples taken from a grimy, metal-contaminated environment, target colonies are difficult to distinguish from “background” microbial growth.

Recovery of an underground transportation system has six distinct phases: notification, first response, characterization, decontamination, clearance, and reoccupancy. Each of these phases is addressed in the UTR decision framework, which underlies the Web-based tool. Typically, trained personnel begin by immediately collecting samples from the air and surfaces in specified areas. Sample analysis assists in defining the extent of contamination and the biological attributes of the agent, including particle size, spore concentration, and viability. Event characterization helps evaluate the possible health risks and establish emergency measures and containment options.

Minimizing the number of samples needed is key to reducing recovery time. The samples are typically cultured to detect target cell growth, an indication of whether live pathogens are still present. Pathogen colonies that develop must be confirmed by polymerase chain reaction (PCR) or other methods, increasing analysis time. Such anlyses typically take between 36 and 72 hours for confirmed results.

The Livermore team has identified key challenges when analyzing samples taken from grimy, urban environments. When microbes are extracted from a sample for culturing, residues and materials inherent in the environment, including other bacteria, are extracted, too. These bacteria also grow during incubation, potentially interfering with the growth and identification of the target bacteria colonies.

To save time, increase throughput, and achieve greater accuracy, the Livermore team has adapted the Laboratory-developed rapid viability PCR (RV-PCR) technique to work on samples collected from metal-laden environments. RV-PCR is a semi-automated procedure that uses the change in PCR response during a short, 9-hour culture process to detect viable spores or cells. (See S&TR, September 2010, Quickly Identifying Viable Pathogens from the Environment.)

Microbiologist Staci Kane led the effort to adapt the RV-PCR method for subway samples by increasing the culture volume and modifying the PCR conditions. The PCR process uses an enzyme to replicate and increase the amount of target bacterial DNA in a sample. The Livermore team added an extra PCR enzyme to overcome inhibition resulting from grime in the environment and better amplify the target DNA, thus reducing false-negative results. Once the biological threat is characterized, the most effective decontamination methods can be selected. 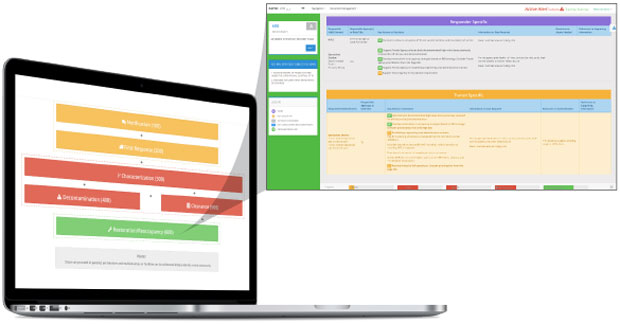 A first-ever Web-based decision framework guides users through a step-by-step decision tree for bringing an underground transportation system back to full service following a biological attack. Shown on the computer screen are the six distinct phases of restoration as seen in the framework. (inset) A snapshot of the reoccupancy interface illustrates the steps involved during this phase of restoration.

Each of the five primary components of an underground transportation system—subway cars, control and support facilities, tunnels, yards, and stations—require a different decontamination approach because of the varying materials and assets in each area. Possible decontamination solutions for biological threats include oxidizers (such as hydrogen peroxide or chlorine dioxide), pH-amended bleach or dichlor, and methyl bromide (a colorless, odorless, nonflammable gas, used as a fumigant). For this project, EPA, along with Sandia National Laboratories, led laboratory and field evaluations to determine which decontamination process recommendations will be incorporated into the final decision framework.

Standardized decontamination methods for B. anthracis spores use corrosive oxidizers that can penetrate the bacterium’s spore coat and prevent germination and outgrowth. However, oxidizers can cause corrosion, compromising assets such as vents, pipes, and electronic components. As a result, this approach can be intrusive, costly, and labor intensive. Methyl bromide (once used to eliminate pests and termites for home fumigation) is a more effective, noncorrosive gas for eradicating bacterial spores, but the chemical is known to deplete Earth’s ozone and is strictly regulated. Recently, an activated-charcoal filtration system was developed to collect methyl bromide after its release, so this gas is now a potential option for disinfecting corrosion-sensitive areas—cars and control rooms, for example—affected by B. anthracis spores. The UTR team is considering using liquid, gel, or fog-based oxidizers for decontaminating tunnel walls and train stations, since the areas are so large and the environments do not lend themselves to the gas approach. Decontaminants such as pH-amended bleach—a neutral pH solution—can be used as less corrosive, yet effective options.

The UTR decision framework tool aligns with the National Incident Management System—a guide that identifies a common incident management structure for agencies responding to national emergencies, including CBR attacks. Livermore will continue building on the framework to prepare site-specific biological response plans for the NYCT and BART systems, which will be the most comprehensive recovery plans to date.

“We hope that being prepared for CBR attacks is in itself a form of deterrent,” says Bob Fischer, a Livermore UTR team member and environmental scientist who leads development of the Web application. “By having the capability to rapidly restore service, we will have reduced the effects of such an attack, if one were to occur.”