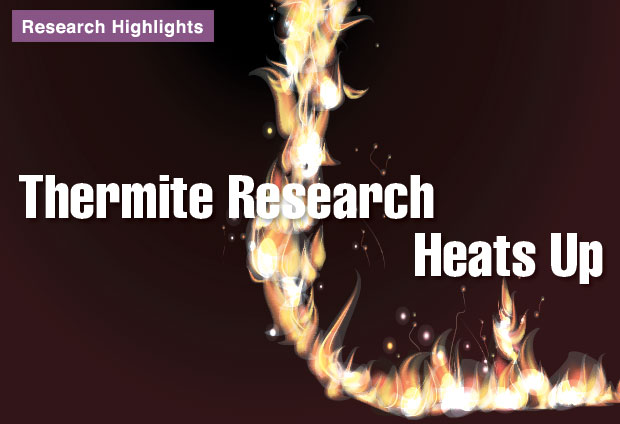 Energetic materials—explosives, propellants, and pyrotechnics—are substances that store and release large amounts of chemical energy. They are made by either physically mixing solid oxidizers and fuels to produce a composite energetic material, such as gunpowder, or by creating a molecule that contains both oxidizing and fuel components, such as TNT. The total energy released during the chemical reaction—the energy density of the material—can be much greater for composites than for single-molecule energetic materials, but the rate at which composites release energy is much slower (that is, the power is lower). (See S&TR, October 2000, Nanoscale Chemistry Yields Better Explosives.)

Laboratory scientists have begun to remedy this trade-off between energy density and power. “With composite materials, the particles have to diffuse much further to mix, which slows the reaction,” explains Livermore materials chemist Alex Gash. “Although composites will never be like explosives, we can make them react faster by making their particles smaller.” Twenty years ago, scientists discovered that shrinking fuel and oxidizer particle size from the micrometer to the nanometer scale boosts composite reactivity by at least three orders of magnitude. Consequently, efforts to improve reactivity have focused on refining particle size and other methods for decreasing the distance particles have to travel.

Livermore mechanical engineer Kyle Sullivan studies thermites, a type of pyrotechnic composite made from a metal fuel and metal oxide that rapidly burns up when ignited. Because of the focused, intense heat thermites provide, they have traditionally been used for applications such as metal joining and cutting. Sullivan, Gash, and fellow Livermore researcher Joshua Kuntz have examined the effect of fuel size on reactivity by initiating thermite reactions in clear acrylic burn tubes and recording the resulting flame propagation with a high-speed camera. They found that below three micrometers in diameter, decreasing particle size has rapidly diminishing returns.

The results redirected the team’s focus. Rather than concentrating on how to optimally mix ingredients into a loose powder, Sullivan and colleagues, with funding from the Laboratory Directed Research and Development Program, have been exploring the feasibility of tailoring reactivity by controlling the mesoscale architecture. Three-dimensional (3D) thermite structures may be able to boost reaction control and reproducibility to enable new applications for these materials. 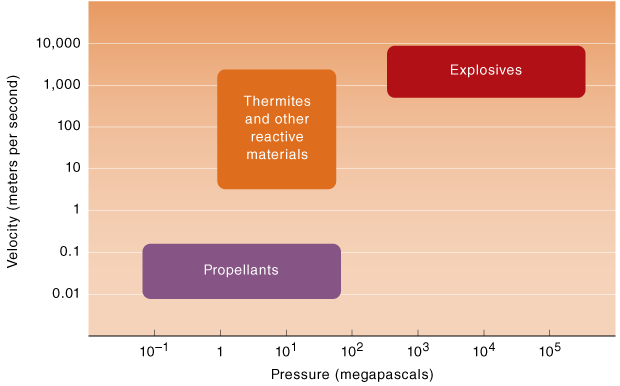 Building a thermite architecture that achieves the desired behavior for a given application requires an in-depth understanding of reaction phenomena and the key variables governing them. “Part of the challenge is that we are dealing with nanoparticles. Much of their behavior is unknown compared to that of bulk materials,” notes Sullivan. Further, when thermites ignite, many processes happen almost simultaneously—particles melt and decompose, and heat and gases are released—making it difficult to unravel details about the path from reactants to products with sufficient spatial or temporal resolution. The researchers’ strategy has been to approach the problem in a tiered way, by looking at thermite behavior at multiple length and timescales.

At the nanometer and nanosecond scales, Sullivan’s team has applied in situ dynamic transmission electron microscopy (DTEM), a Livermore-developed technology, to capture material response to rapid heating. In a DTEM experiment, a short laser pulse rapidly heats a small region of a specimen, initiating material transformations. A camera captures images or diffraction patterns of the dynamic process with as little as 10 nanoseconds of exposure time and as fine as 10-nanometer spatial resolution. (See S&TR, October/November 2013, High-Speed Movies at the Nanoscale; September 2013, A Bright Idea for Microscopy.) For these experiments, the researchers heated and probed nanometer-scale aluminum particles, a common thermite fuel, to isolate fuel behavior during a thermite reaction.

When exposed to air, aluminum particles form an oxide shell. For nanometer-scale particles, the shell makes up a substantial fraction of the particles’ volume and can have a significant effect on their behavior. For instance, aluminum’s melting temperature is well below the melting point of the aluminum oxide shell, leading some researchers to theorize that as the thermite is ignited and the material undergoes rapid heating, the aluminum will melt and expand while the shell remains solid, causing the particles to burst. However, during the Livermore experiments, the heated particles did not break up. Rather, they quickly—within tens of nanoseconds—melted and coalesced into larger particles.

Gash notes, “DTEM debunked many speculative theories on what happens during a reaction.” If thermite fuel particles are merging before they combust, this behavior could help explain the plateauing burn speeds witnessed in the experiments on particle size, as coalescence reduces the surface area available for reactions with the oxidizer. The results support the idea that future reactivity enhancements will likely come from methods other than reductions in particle size.

Role of Gases and Particles

To better understand behavior at the micrometer and millisecond scales, the Laboratory researchers explored burn propagation on two-dimensional thermite tracks of various patterns and thicknesses. First, they created aluminum–copper oxide nanoparticle films using electrophoretic deposition (EPD), an additive manufacturing (AM) technique in which particles can be deposited onto a conductive electrode with precisely controlled thickness and mass. (See S&TR, April/May 2015, A Guiding Light for Designer Materials.) The researchers then ignited the thermites and captured the reactions with high-speed imaging. Thick films (155 micrometers) were found to react nearly 10 times faster than thin films (26 micrometers), suggesting that feature size plays a role in reactivity. The team attributed this behavior to the increased thickness permitting more intermediate gases to be trapped, which builds pressure internally and promotes forward energy transport. In studying EPD as a method for incorporating thermites into microelectromechanical or microenergetic devices, the team noticed that flames could travel down crooked paths, around corners, and across gaps, suggesting the reaction is driven forward by a complex interplay between gases and hot particles.

Experiments at the mesoscale have thus far focused on how neighboring 3D thermite structures interact with one another. The researchers, in conjunction with Livermore engineer Chris Spadaccini’s AM team, used direct ink writing (see S&TR, March 2012, Materials by Design) to build 0.5-millimeter-high substrates of silver, which were subsequently coated with an EPD-applied aluminum–copper oxide film. The silver structures were printed in two orientations and with different separation distances. Some sets of structures, called channels, were deposited parallel to the thermite burn path, while others, called hurdles, were positioned perpendicularly. Channel and hurdle flame propagation behaviors were compared with one another and with thermites deposited on a flat surface for a baseline comparison.

Both distance and directionality affected the reaction speed. Below a certain spacing in channels, the researchers observed an increase in speed—up to two to three times the baseline speed. By contrast, speeds gradually increased as the hurdles were spaced further apart, from values below the baseline to those similar to the peaks reached by the channel reactions. Through high-speed imaging, the team observed that in the channel arrangement, gas release by the ignited thermite expands perpendicular to the direction of the reaction propagation. If the channels are close enough, the expansions can physically overlap and promote energy transport by propelling hot gases forward.

Hurdles behave differently. If the reacting material encounters the next hurdle before the reaction and gas expansion is fully developed, the expansion is interrupted, the reaction impeded, and the material pushed sideways. However, with the right separation, hurdles can enhance the reaction by “throwing” molten particles from hurdle to hurdle. “The hurdles play a game of toss and catch,” says Sullivan. “If the barriers are far enough apart, the particles can be transported a long way and ignite downstream material.” Not only did the mesoscale experiments help researchers understand gas and particle behavior, but they also successfully demonstrated that 3D architectural features such as spacing and orientation can be used to tailor thermite reactions. 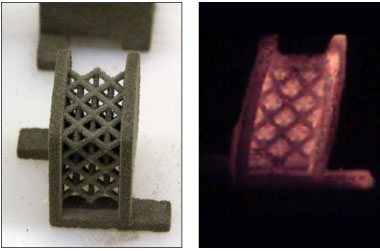 Livermore researchers are designing, building, and testing 3D reactive structures, including both thermite and intermetallic formulations. An example skin-lattice design, produced by engineer Robert Reeves, is shown (left) before and (right) during a reaction. Ongoing work is examining the trade-off between material reactivity and strength and investigating how materials such as this can be used as structural components in energetic systems.

Livermore researchers are currently using various techniques to print 3D structures of reactive materials. AM methods and 3D architectures are offering a new level of control over thermite reactions. Previous results are driving architecture designs, for example, by informing the feature size and orientation of the members within a part. The precision placement of energetic material in complex architectures can provide a user with additional ways to control the reactivity or explore new applications. For instance, these parts could replace inert structural components in a system. These materials could then contribute to the energy release, and their performance could be tailored through their design. Other applications involve microelectromechanical components, complex heat sources for thermal batteries, or 3D metal-joining tools.

Lawrence Livermore’s decades of research in energetic materials, its unique characterization tools such as DTEM, and its robust 3D printing and materials assembly infrastructure have together enabled an effective new approach to boosting thermite reactivity and reproducibility. The team is optimistic about the method’s broader utility. “Instead of developing new molecules and formulations,” notes Sullivan, “architectural control provides us an opportunity to further exploit the energetic materials we already have.”