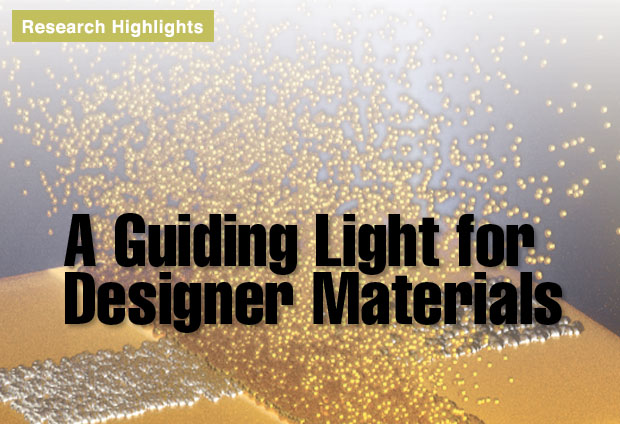 The ability to fabricate three-dimensional (3D) parts and other components with the utmost precision has always been a necessity for Livermore. Time and painstaking effort are dedicated to producing objects needed for many of the Laboratory’s missions, including stockpile stewardship. Additive manufacturing (AM) processes have recently shown promise for improving the quality and repeatability of components and for significantly reducing the time and cost associated with their production. (See S&TR, January/February 2015, Next-Generation Manufacturing for the Stockpile.) In addition, AM may also enable the development of novel materials with unique properties. (See S&TR, March 2012, Materials by Design.)

Several AM approaches are under development at Livermore. Electrophoretic deposition (EPD) uses an electric field to drive suspended colloids from a solution onto a conductive substrate. Originally developed for applying corrosion-resistant paint to car bodies, EPD has evolved into a process that allows a wide range of materials to be deposited on various surfaces, including ceramics, metals, polymers, living cells, and biological material. However, the process is limited because a material can only be deposited uniformly across a surface, and the pattern cannot be changed as the material is built up.

As part of a study funded by the Laboratory Directed Research and Development Program, Livermore scientists are transforming EPD from a simple coating process to a new AM capability for freely creating 3D structures. “We have demonstrated multimaterial patterning using a light-directed EPD technique that enables two or more materials to be placed next to and on top of each other,” says Livermore materials scientist Andrew Pascall. “Our work has shown that 3D composite structures are possible.” A team led by Pascall, which includes materials scientist Joshua Kuntz and computational engineer Luis Zepeda-Ruiz, is also developing improved simulation and modeling capabilities to better understand the deposition process. The models will help visualize the fundamental physics of deposition that control whether colloids deposit randomly on a surface or whether they form dense crystal structures.

With light-directed EPD, researchers can use a much larger breadth of materials as compared with other AM tools, because the technique relies on particle size and surface charge rather than on the actual chemistry of the deposited material. In addition, EPD techniques offer submicrometer lateral precision and the potential for large-scale production. Kuntz explains, “With light-directed EPD, our goal is to fabricate functional and graded 3D composites for a wide range of Laboratory and industrial applications.”

Drawn to the Light

In traditional EPD, a liquid suspension containing electrically charged micro- to nanoscale colloidal particles is flowed into a deposition cell with opposing electrodes. When an electric field is applied to the deposition cell, the surface charge of the particles causes them to flow parallel to the field lines until they hit and stick to the electrode’s surface. A drawback of traditional EPD is that the electrodes are static contacts, and therefore they are not changeable during deposition. As a result, gradients in the deposit composition can be made only in a direction normal to the electrode surface. Static contacts also restrict the dimensionality of the deposited structure. “Movable counter electrodes have been investigated as a method for depositing materials in targeted areas, but these approaches have not demonstrated multimaterial patterning and are difficult to scale,” says Pascall. “A dynamic, reconfigurable electrode is needed for patterning in all directions.”

Altering material composition or particle size requires the ability to change material in the deposition cell. The team’s flow-control system allows one material to be flowed into the cell in a particular pattern, then flowed out, and a new material to be injected as the pattern is changed. Without such flow control—which most other EPD techniques lack—the composition cannot be changed as one changes the thickness away from the substrate. Thus, light-directed EPD can rapidly pattern multiple, diverse materials to produce 3D composites to exacting specifications.

Another benefit to light-directed EPD is that void space can be incorporated into a composite structure by depositing a material within a layer that can be subsequently removed with postprocessing. “Typically, EPD provides a structural ‘green body,’ similar to a sandcastle or an unfired ceramic,” says Kuntz. “After the object is fabricated, chemical curing or some other thermal process is needed to induce physical bonding throughout the structure.” The ability to add in and then burn out excess materials gives light-directed EPD an edge in producing 3D composite structures, and it is the only EPD technique with the demonstrated capability to produce such structures over large areas and with fine resolution. 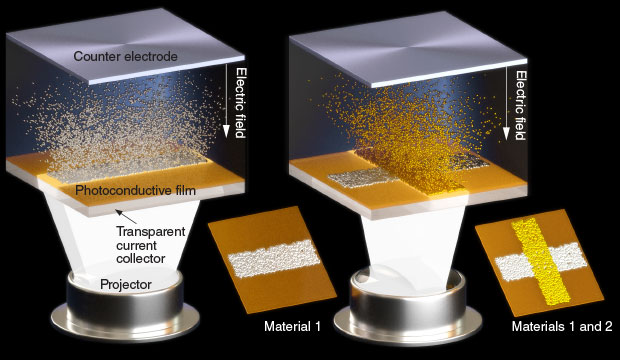 Livermore researchers use light-directed EPD to produce composite materials by precisely placing two or more materials in the plane of the electrode. (left) In this case, a metal (black) and ceramic (white) composite has been formed. (right) Layered composite materials can also be formed via traditional EPD, such as in the case of these different-sized polymer spheres. The largest spheres shown here are 1 micrometer in diameter. Arbitrary three-dimensional composites can be produced by combining these two modes.

Computational modeling has become a powerful tool for helping researchers study complex physics processes. For this reason, the light-directed EPD research team is turning to advanced simulation to predict the fundamental physics of deposition, which in turn could speed development of improved colloid suspensions. “We are applying direct element modeling techniques to simulate individual nanoscale particles—ten to hundreds of nanometers in size—in colloid suspensions,” says Zepeda-Ruiz. “These models help us to understand the deposit morphology. We want to know what process parameters lead to ordered versus amorphous deposits.”

Simulations are designed to describe how the colloidal particles move in the electric field and how they interact with each other and the substrate surface. “An EPD model is a mesoscopic particle simulation that incorporates the essential electrokinetic and hydrodynamic forces and the particle–particle and particle–electrode interactions that are especially relevant in the assembly of colloidal particles in 3D crystalline lattices,” says Pascall. “From the models, we can see how single or multiple colloids will adhere to a particular surface as well as the difference between the deposition rates and self-diffusion abilities of the particles.”

The team theorizes that the particles’ degree of ordering is controlled by the Péclet number—a variable, directly proportional to the electric field, that compares how fast colloids arrive at the electrode surface versus how fast they diffuse laterally across it. By modeling particle deposition as a function of the Péclet number, the team can see exactly how the particles are arranged on the electrode and whether they form crystalline arrays or deposit randomly. “We are modeling a combination of experimental parameters, different materials, solvents, and particle sizes,” says Zepeda-Ruiz. “We’ve shown that a low Péclet number or low electric field results in an ordered deposit and that the other extreme is also possible. With a high electric field or high Péclet number, the result is a highly disordered deposit.”

The team has run experiments using polystyrene particles deposited over a range of Péclet numbers to validate the computational efforts. “The models allow us to describe the ordering more precisely, which helps us interpret experiments and predict behavior,” says Zepeda-Ruiz. “With properly validated models, we can decrease the time needed to develop productive, focused experiments. Variables are much easier to change independently in a simulation than they are in an experiment, so the models can save time by helping us achieve a desired result more quickly.”

Using computational techniques to model large-scale electrophoretic deposits at the micro- to nanoscale are vital to transforming light-directed EPD into an AM technology. “We’re not running these simulations simply for knowledge’s sake but rather to better understand the method itself and the performance of materials for a variety of applications,” says Kuntz. At a larger scale, the group is evaluating how dynamic light patterns alter the electric field lines and colloid trajectories in a deposition chamber. Such information will allow them to control patterning during deposition for improved 3D structural fidelity. 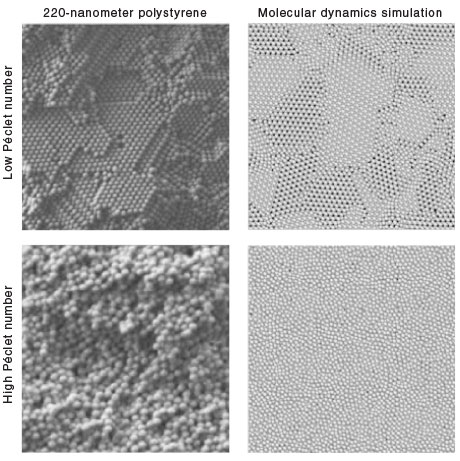 A comparison between experiments using polystyrene beads and molecular dynamics simulations shows the effect of electric field (high or low Péclet number) on the microstructure of the deposited material. The Péclet number can be used to control microstructure over a range of particle sizes.

George Brewer, the man who is credited with developing EPD for Ford Motor Company in the late 1950s, once said that 150 person-years of research elapsed between the initial EPD concept being devised and the first EPD-coated car rolling off a production line. Transitioning EPD to a fully automated AM technology will also take time, but the adjustments Livermore has made to this technique are already yielding beneficial results. Flow-controlled EPD, for example, is currently being used to create new composite energetic materials and composite armor for defense applications.

In the future, the team envisions light-directed EPD being a completely automated process for AM applications. “This work represents a large step in advancing EPD as a method for fabricating complex, 3D patterned composites,” says Pascall. Once fully developed, light-directed EPD may serve as a tool for experiments at the Joint Actinide Shock Physics Experimental Research (JASPER) Facility. (See S&TR, April/May 2013, The Shot Heard ’Round the Complex.) Kuntz says, “We’re investigating how light-directed EPD could be used to build graded-density impactors—multilayered projectiles made of various graded materials that allow researchers to carefully construct the pressure profile of JASPER experiments.”

One day, commercial 3D printers could be based on light-directed EPD, but for now, the team’s focus is on demonstrating the technique’s versatility and functionality. This process will take time and effort, but the realization of light-directed EPD as a full-scale production capability is well worth the wait. AM technologies such as this represent the next generation of tools for manufacturing and fabrication—tools that will revolutionize American manufacturing and help develop materials with customizable properties for stockpile stewardship and an ever-expanding range of other important applications.