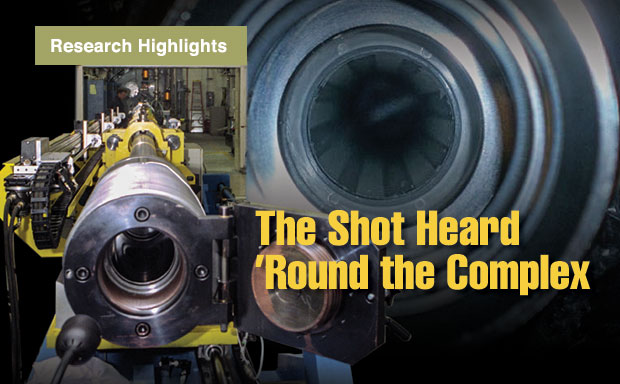 
Plutonium is an enigmatic material, and it does not give up its secrets easily. A key component of nuclear weapons, plutonium undergoes physical changes during a nuclear event and also as part of its natural aging process. (See S&TR, December 2012, Plutonium at 150 Years: Going Strong and Aging Gracefully.) A thorough understanding of plutonium’s properties, including its equation of state (EOS), underpins the National Nuclear Security Administration’s Stockpile Stewardship Program and is a primary focus of research at Lawrence Livermore.

For many years, scientists conducted underground nuclear testing to assess weapons performance, including how materials such as plutonium behave under these conditions. In the absence of this experimental capability, scientists have turned to advanced supercomputers to simulate aspects of nuclear weapon performance in detail. However, these massive simulations require precise data on the properties of plutonium as input. Data derived from historic nuclear tests have been valuable but are limited and not physically reproducible.

Gas guns are a proven tool for studying material behavior under sudden high temperatures and pressures. They enable researchers to subject various materials to a broad range of conditions, and the data returned from these experiments can be extremely accurate. In 2003, the Laboratory began its first set of plutonium experiments on the two-stage gas gun at the Joint Actinide Shock Physics Experimental Research (JASPER) Facility located at the Nevada National Security Site. (See S&TR, June 2004, Shocking Plutonium to Reveal Its Secrets.)

JASPER is a key scientific tool for investigating the physical properties of metals and actinides, specifically for studying plutonium at conditions relevant to the performance of nuclear weapons. The facility provides a much more cost-effective option for gathering data in comparison to underground testing. On September 25, 2012, Livermore researchers fired the gas gun’s 100th shot in an experiment that further improved their understanding of plutonium’s properties and ushered in the next era of plutonium-based research.

JASPER’s 20-meter-long, two-stage gas gun uses a combination of gunpowder and a light gas, such as hydrogen, to fire projectiles at up to 8 kilometers per second into precisely engineered targets about the size of a quarter. The gunpowder propellant pushes a deformable piston down a gas-filled tube, and as the piston travels, it compresses the gas inside the tube to thousands of pounds per square inch. Once the gas reaches a certain temperature and pressure, a valve bursts, and the gas accelerates a projectile, or impactor, down another tube to the target.

Livermore physicist and JASPER chief scientist Neil Holmes says, “It is like slamming a bullet the size and weight of an ice cube into a target at 18,000 miles per hour [8,000 meters per second], 10 times faster than a bullet leaving a rifle.” The impact of the projectile on the target drives the experiment. The event sends a one-dimensional shock wave through the target material, achieving pressures of millions of atmospheres and temperatures of thousands of kelvins. The entire experiment happens in 300-billionths of a second. Scientists use an array of sophisticated diagnostics connected to the gas gun and attached to each target to measure the material’s response.

The primary goal of JASPER experiments is to measure plutonium’s EOS. “EOS is the relationship between the pressure, density, and temperature of plutonium under a broad range of conditions,” says Holmes. Plutonium is considered one of the most interesting of all the elements because of its remarkable properties and incredibly complex phase diagram. When the material is pressurized and heated, its crystalline structure changes at equilibrium—called a phase—causing it to act like a different metal at every turn. JASPER experiments enable scientists to observe and study known and unknown phase transformations based on experimental parameters. With every JASPER experiment, scientists try to identify a critical part of an unmapped region of plutonium’s phase diagram.

The experimental conditions produced in a JASPER shot are exacting, and the results gathered are extremely precise. “JASPER provides accurate data that is beyond reproach,” says Holmes. The needs of the Stockpile Stewardship Program demand measurements with an accuracy within 1 percent, and JASPER exceeds this requirement. “Each experiment includes a high level of rigor, analysis, and design to meet the expected goals of a shot,” he adds. “Thus, each experiment must only be performed once to obtain the necessary data.”

According to Randy Thomas, field manager for JASPER, the accuracy of data comes down to three main ingredients: the impactor, the target, and the diagnostics. “All three components have to be precisely fabricated and aligned to achieve such accuracy,” says Thomas. Typically, experiments involve solid-metal impactors that produce a single-wave impulse. However, more recent experiments have benefited from a novel impactor developed in part by Holmes with other Livermore physicists several years ago. Called graded-density impactors (GDIs), these multilayered “bullets” made of various materials allow researchers to carefully construct the pressure profile of experiments.

“The impactors are fabricated using materials with different densities, which allows us to vary the pressure pulse that moves through the target,” says Thomas. GDIs help scientists achieve the exact temperature and pressure of the phase transitions rather than simply the relationship of pressure to density for a single, shocked state. (See S&TR, March 2007, New Routes to High Temperatures and Pressures.) “GDIs have enabled us to take the science of studying plutonium to the next level,” says Thomas. “We are investigating plutonium at pressures and densities previously inaccessible to experimentalists.”

JASPER targets fuse engineering and artistry. “Our engineers combine innovative fabrication techniques and exceptional skill to manufacture high-quality targets within very precise specifications to meet the needs and goals of each test,” says Holmes. Targets are fabricated with no more than a 2.5-micrometer deviation in height. Machining such flat surfaces is difficult, and plutonium is particularly hard to work with. Each target surface is polished by hand so that the components and bonding between them are within 1 micrometer of the target’s specification. Technicians must perform these tasks inside a glovebox working through thick gloves. Finally, diagnostics are attached to the back of the target and are aligned to exact locations—also within a micrometer—to measure many types of data such as velocity and temperature. “It’s this precision in our impactors, targets, diagnostics, and experimental design that makes us confident in the results,” says Thomas.

(left) The graded-density impactor (GDI) combines up to 100 metallic layers of varying densities. This particular GDI comprises copper on the bottom, a combination of copper and magnesium in the middle, and magnesium on top. (right) The GDI is pressed into a plastic case to create the complete “bullet” (about 3.8 centimeters or 1.5 inches long) that travels down the gas gun. Only the metal plate at the top of the projectile impacts the target. 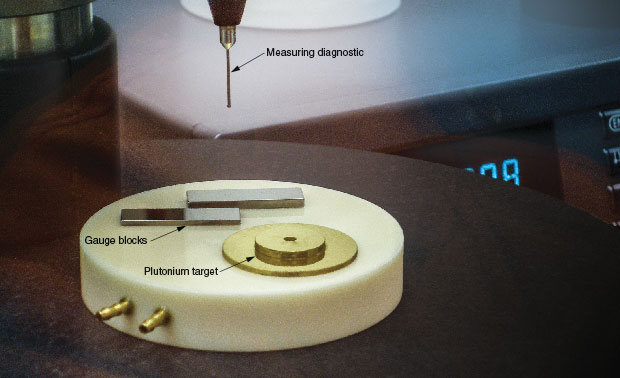 JASPER plutonium targets are engineered and fabricated to exact specifications. A diagnostic is used to measure the thickness of the plutonium target. The tool is calibrated by first measuring gauge blocks of known thicknesses.

Peeking at the Answers

The 100th shot at JASPER was a milestone achievement for the Laboratory, its collaborators, and the Stockpile Stewardship Program. It was also the first of its kind in the nuclear weapons complex. When a shock wave passes through a plutonium target at JASPER, it accelerates the material and raises its temperature to the point that it becomes incandescent and emits light. During the 100th shot, researchers measured both the light emitted from the backside of the target and the velocity of the surface as the shock wave arrived. Previously, these measurements had not been made simultaneously. Together, they provide information about changes in plutonium’s temperature and density under shock compression.

Measuring the light emitted from a shock-compressed target has been a significant challenge for the JASPER team, but one that was overcome through close collaboration with researchers from Los Alamos National Laboratory and National Security Technologies, Inc. (managing contractor for the Nevada site). “We spent years working with our partners to design and fabricate targets, develop measurement techniques and instrumentation, conduct shots, analyze data, and deliver results,” says Holmes. “These efforts are a model for how the laboratories can work together toward a common goal.”

Results gleaned from JASPER experiments, such as those achieved in the 100th shot, are as Holmes describes, “like looking in the back of the book for the answer.” Over the years, scientists have devised theories to explain how plutonium behaves under certain conditions. These theories have to be proven and often change when new data emerge. Having the answer, via experimental results, helps researchers work backward toward a better understanding of the problem, or in this case, the theory behind how the material behaves. With JASPER, scientists can effectively analyze errors, measure uncertainties, and build experiments that provide the framework for future analytical tools. “We need theoretical studies to develop really good experiments,” says Holmes. “As we learn more, theories are improved and, in turn, so are experiments.”

Theory and data are the essence of computational models for simulating weapons performance. “The JASPER gas gun produces data from dynamic shock experiments that for the first time are accurate enough to meet the needs of the Stockpile Stewardship Program,” says Holmes. In addition to the shock-physics experiments at JASPER, ongoing subcritical experiments at the Nevada site and experiments conducted at the Laboratory’s National Ignition Facility support stockpile stewardship initiatives, helping to ensure the safety, security, and reliability of the nation’s nuclear deterrent.

Before experiments are run on JASPER, they are first put to the test at Livermore’s High Explosives Applications Facility (HEAF) using surrogate materials. HEAF houses a two-stage, high-velocity gas gun similar to the one at JASPER. Researchers use the HEAF gun to demonstrate experimental methodologies and diagnostics prior to testing actinides and other hazardous materials at JASPER. For example, future x-ray diffraction experiments will first be conducted at HEAF. X-ray diffraction is a technique in which x rays generated from a pulsed-power capacitor are used to take a “flash photograph” of a material’s crystal lattice structure as it undergoes phase transformations during an experiment. Holmes says, “We are pursuing methods for studying how a material’s temperature, pressure, and phases change as a function of time. X-ray diffraction is one such method.”

Another experimental technique for plutonium studies involves in situ temperature measurements. This technique is being used in diamond-anvil-cell (DAC) experiments by Livermore physicist Will Evans and his group. With DACs, researchers can study material behavior at constant temperature and pressures, and the devices have been invaluable for understanding the phase transition of materials deep inside planets. In another research study, Holmes and Livermore physicist Jeffrey Nguyen used Livermore’s two-stage gas gun to discover the melting pressure of iron at conditions comparable to those in Earth’s core. Their next goal is to measure temperature at the same conditions. “One of my greatest ambitions is to accurately measure the temperature at the center of Earth,” says Holmes.

Over the next five years, Holmes and the JASPER team will continue their pursuit of plutonium’s properties and move through the material’s phase diagram to explore those areas where theory is not completely sound. Holmes says, “We are embarking on a new exploration of plutonium, one that will confirm what we know and one that may also serve up surprises.” It appears the mysterious plutonium still has some secrets to reveal.