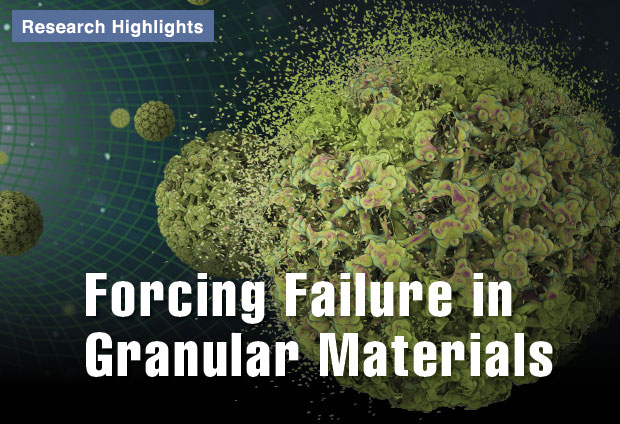 Subjecting small material samples to extreme pressure is a mainstay of research at Lawrence Livermore. Such high-energy experiments help solve national security challenges by advancing scientific knowledge of material properties. Experiments on granular media, which are prevalent throughout industry and nature, enable characterizations relevant to the Laboratory’s defense, nonproliferation, and foundational science missions. For example, to interpret seismic signals from illicit underground weapons tests and to develop methods to counter these threats, scientists must first understand how sand and soil behave under external pressure. Doing so requires an intimate study of grains and their interactions with each other. As Livermore computational geophysicist Eric Herbold explains, “The response of a granular material as a whole depends on how each grain interacts with its neighbor.”

Although the physics community has long studied granular materials under external compaction, a Laboratory collaboration has helped produce the first-ever three-dimensional (3D) measurements of interparticle forces in a granular material during external loading and unloading. Livermore postdoctoral researcher Ryan Hurley teamed up with Stephen Hall of Lund University in Sweden to image quartz grains subjected to external pressure. Their experiment used 3D x-ray diffraction (3DXRD) and x-ray computed tomography (XRCT) at the European Synchrotron Radiation Facility (ESRF) in Grenoble, France. Using a novel analysis of these measurements, Hurley led an effort to track the evolution of interparticle forces and the relationship between an individual grain’s behavior and external pressure. Building on this success, Hurley and Herbold secured support from Livermore’s Laboratory Directed Research and Development (LDRD) Program for new experiments that will focus on observing and detecting cracking, deformation, and other forms of material failure caused by external pressure. “Improving the current understanding of failure in granular materials will help us scale up models of localized strength and failure to real-world scenarios,” says Hurley. 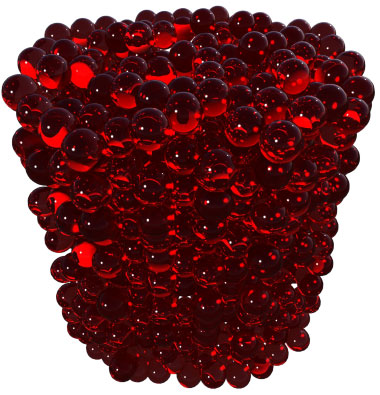 The Livermore team’s experiments follow a specific protocol. A force-loading device grasps the top and bottom of a hollow cylinder that is roughly as wide as a nickel is thick and is packed full of tiny spherical grains. Where each grain meets another is known as a grain boundary. Multiple adjacent boundaries make up a contact network, through which the interaction of grains affects the overall material’s physical properties. When the collection of grains is compressed, forces move through the contact network in paths called force chains and can create conditions for failure. This experimental setup enables scientists to examine force chains and contact networks around a fracture as well as the effects of these phenomena on material properties such as strength and stability.

In an initial experiment, Hurley and Hall packed a hollow quartz-glass cylinder with 77 grains of quartz, each grain measuring between 220 and 310 micrometers in diameter. Under the guidance of ESRF’s Jonathan Wright, the team used the facility’s diagnostic technology to record what happened inside the cylinder as the piston-driven device slowly applied vertical pressure to the sample. At regular intervals over the course of 70 minutes, the team initially held the pressure constant while illuminating the sample with a 1.5-millimeter-wide beam of x-ray radiation and slowly rotating the sample 180 degrees for 3DXRD and radiography measurements. These measurements were performed 24 times at different external pressures. After the experiment, XRCT algorithms converted radiography images into 3D renderings, and 3DXRD elucidated stress and strain within each grain. Special numerical algorithms then determined forces at each grain boundary from these data.

The collection of grains in the tightly packed cylinder mimics naturally occurring materials such as compacted soil. Studies have shown interparticle forces to move unevenly through these systems—a condition known as heterogeneity. However, the 3D quartz experiment revealed an interesting evolution—as the pressure increased, patterns in the force chains showed a homogeneous trend as they assembled and strengthened. Buttressed by the cylinder’s walls, grains on the perimeter joined vertically connected force chains, whose distribution shifted and became more uniform as the pressure continued toward a peak near 66 newtons, or about 15 pounds of force. Then, as the pressure ramped down and interparticle forces transferred to different grains, the system became more heterogeneous. This progression from homogeneity to heterogeneity suggests that, depending on external pressure, a different portion of grains may actually furnish a material’s stiffness. Hurley notes that this heterogeneity also plays a role in strength and failure. He says, “A fractured grain may not be able to continue supporting the load, so the load shifts elsewhere.” 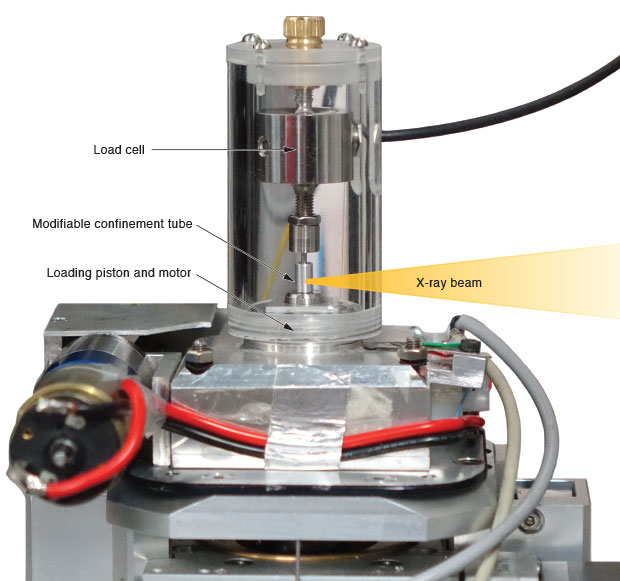 In this photograph, taken at the European Synchrotron Radiation Facility, a loading device used to test granular materials sits atop a mounting plate aligned with a 1.5-millimeter-wide x-ray beam. The device, fabricated by a Lund University collaborator, is designed to hold a cylinder target in place through a load cell while a piston applies pressure from below. For upcoming experiments, Livermore scientists Ryan Hurley and Eric Herbold will guide customization of the confinement tube and development of additional acoustic and ultrasonic technology.

Before kicking off the LDRD project, Hurley again worked with Hall to conduct another experiment at the ESRF. The objective was to repeat the same process used for quartz with another material and more grains, compiling a preliminary data set to feed into subsequent experiments and analyses. This experiment used a similar loading protocol but a different type of sample—an aluminum cylinder full of 1,100 ruby crystals. “The friction and stiffness properties of quartz and ruby are on the order of what we find in natural sands and powders,” explains Hurley. In addition, ruby grains are easier to find in small shapes, so more of them fit into the same cylinder volume. In this experiment, 3DXRD and XRCT measurements revealed that more grains cracked and fragmented as the load increased, providing valuable data about where failures occur and how force chains rearrange around those failures.

Beginning this spring, the Livermore team will embark on two new experiments with the continued engagement of Hall. The first will again test a ruby sample but apply compression on three axes. A cylinder made of a deformable membrane will allow the team to control the stress on all sides of the material. This so-called triaxial experiment is expected to yield data about strain patterns and the formation of localized deformation zones called shear bands. Shear localization is a key failure mechanism of granular materials, yet scientists do not fully understand what triggers shear bands or what effects they have on material properties after formation. For the second experiment, the team will test nonspherical grains. Spherical grains, such as those often found in additive manufacturing and pharmaceutical powders, pack in regular and predictable ways, but irregularly shaped grains should produce more complex force chains, strain evolution, and failure mechanics. This irregularity is found in many natural soils, polycrystalline solids, and amorphous metals.

Supplemental measurements may reveal aspects of failure processes elusive to other diagnostics. In particular, the Livermore team has the opportunity to use acoustic receivers to detect vibrations produced when grains fracture or a load changes its path. In addition, an ultrasonic transducer can send high-frequency waves through a granular material to show how waves travel along force chains. According to Herbold, measuring sound speeds across the acoustic transmission spectrum can help scientists interpret seismic activity moving through the ground—not only activity during an earthquake but also from an illicit nuclear test. Hurley notes additional applications in structural monitoring, soil testing, and material design. “Perhaps we’ll see behavior we haven’t seen before,” he remarks.

The final phase of the LDRD project will involve calibrating Livermore’s multiscale GEODYN-L code with accumulated data. Run on massively parallel computing systems, GEODYN-L lets researchers model wave propagation through fractured rock. Applications range from monitoring near-field explosives to direct metal laser sintering for additive manufacturing to calculating the impact effects of asteroid deflection. Once augmented with the quartz and ruby data, GEODYN-L will be able to predict further results with the team’s new technologies. Herbold describes a complementary relationship between simulations and experiments. “Our models can include all of the nonlinear interactions between grains, but we don’t know how the combined effects result in material response,” he says. The team will perform sensitivity studies to analyze those responses and refine the code. In this way, modeling helps close gaps in experimental data, strengthening GEODYN-L’s role as one of the Laboratory’s valuable predictive capabilities.

(top) Force inference results are shown for 6 of 24 load steps in an experiment, in which the peak was approximately 66 newtons (N). Strain among quartz grains is depicted along a color spectrum, with highest compression levels in blue and highest tension levels in red. (bottom) Prominent force chains along particle contact networks in the cylinder are shown, with isolated grains indicating where force chains diverge. 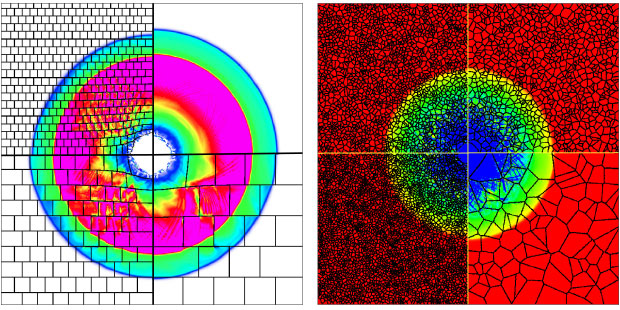 As a massively parallel physics code run on supercomputing systems, GEODYN-L has the capability to simulate nonlinear wave propagation through solid rock. In the two simulations shown, the changing intensity of a wave propagating from the center of a material sample is depicted as a colored spectrum within a matrix of solid particles (black-outlined shapes). Each simulation has quadrants of different particle sizes (or, in the left simulation, three sizes and a continuum in the upper right), demonstrating how particle size can be varied according to the material simulated. Data from the Livermore team’s upcoming experiments will help improve the accuracy of frictional and tensile variables in the code.


Making Sense of the Ordinary

Lawrence Livermore’s investigations of grains and their behavior go back many years, including such efforts as simulating powders under dynamic loading (see S&TR, June 2010, Exploring the Unusual Behavior of Granular Materials) and modeling the microstructural effects of radiation on grain-boundary networks (see S&TR, March 2016, Understanding Materials at the Nanoscale). Multiple microscopy techniques have been used to characterize grains and grain boundaries in metals through a process called crystal orientation mapping (see S&TR, December 2014, Crystals Go under the Microscope). Meanwhile, another LDRD project is measuring granular materials’ responses to shock waves to improve the Laboratory’s computational capability in shock physics.

Despite these advancements, making sense of the collected data presents a hurdle. Published studies use statistics and probability to quantify force chains and define force and grain boundary distributions. Beyond these, no standard metrics exist for quantifying the link between force chains and macroscopic behavior in granular materials. “The biggest challenge with these materials is that no first-principles models exist. We have to come up with the methods of quantification on our own,” notes Hurley. “For instance, it’s not clear what aspect of a contact network will be most important for predicting a particular material property, so we’re exploring new ways of analyzing the data.” Hall introduced the Livermore team to the Gini coefficient, which is normally used in economics to measure income inequality. In physics, the coefficient’s representation of inequality within a frequency distribution helps describe force heterogeneity in various locations throughout a material sample. By calculating trends in vertically oriented forces in relation to exterior force from the piston, the Gini coefficient enables the team to generate numerical measurements of force homogeneity and heterogeneity.

Knowing how and when granular media fail supports the Laboratory’s overall national security mission. From a geoscience perspective, grain behavior under stress has implications for load-bearing sand and soil infrastructure, such as in landslide and earthquake mitigation or penetration for hydraulic fracturing and recovering buried munitions. Herbold adds, “Predicting the mechanical response of a granular material can help our military design better runways in the field or identify suitable locations for underground structures.” The research’s relevance even extends to pharmaceutical pill packing and the storage of agricultural products. Observes Hurley, “Granular materials are everywhere.”