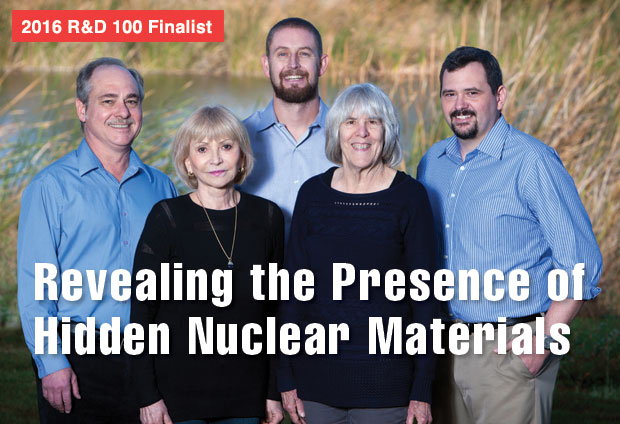 Illicit trade in highly enriched uranium and plutonium poses a significant threat, especially if those materials are used in a weapon of mass destruction. Moved clandestinely in small quantities, these special nuclear materials (SNMs) are easy to hide. A Livermore team, led by Natalia Zaitseva, has developed a novel method for growing solid organic crystals from stilbene—an aromatic hydrocarbon known to effectively detect the fast, high-energy neutrons emitted by SNMs. The technique enables larger crystals to be grown more quickly than with conventional crystal growth processes for developing stilbene-based radiation detectors. The development team was an R&D 100 Award finalist in 2016.

When neutrons pass through stilbene crystal, its molecules absorb some of the neutrons and emit photons, a process called scintillation, producing a unique, measurable spectrum of light. Uranium and plutonium yield spectra particular to each isotope, and stilbene is the most effective scintillator for capturing neutrons and reliably discriminating them from other kinds of radiation. However, stilbene crystals large and inexpensive enough to use in radiation detectors have been difficult to grow. Consequently, today’s scintillation-based detectors typically use cheaper, more easily obtained organic liquids, which are also less sensitive, somewhat toxic, flammable, and challenging to use in the field. Thus, they are not ideal for quickly and definitively detecting the presence of high-energy neutrons from SNMs that may be hidden in cargo ships, trucks, and other transport.

Industrial manufacturers typically use the high-temperature, melt-growth process to produce many solid crystalline materials. With this method, crystallization is conducted by cooling an initial liquid melt until it becomes a solid. Unfortunately, the melt–growth process for stilbene is very slow and produces only small crystals.

Zaitseva’s team developed a faster way to grow larger crystals (greater than 10 centimeters long) by first dissolving the hydrocarbon in an organic solvent. Inside a crystallization tank, the solution gradually crystallizes onto a tiny stilbene seed crystal as the environment within the tank undergoes controlled temperature reduction. Whereas conventional methods of growing stilbene result in crystal growth rates of a few millimeters per day, the solution-grown technique produces crystals at a rate as high as 20 millimeters per day.

The final product of the team’s novel crystal-growth technique is a pure single crystal of stilbene that offers much higher performance than the team’s previously designed plastic scintillators (see S&TR, October/November 2012, A Solid Solution for Neutron and Gamma-Ray Differentiation)—technology that garnered an R&D 100 Award in 2012. In addition, tests of the stilbene crystals have shown that the material has greater light output and superior high-energy neutron discrimination compared to liquid scintillators. “These crystals work much better than anything else at detecting high-energy neutrons,” says Zaitseva. “We developed the commercial production process to make them available in the marketplace.”

From Laboratory to Industry

Livermore’s commercial partner INRAD Optics licensed the technology and has ramped up the solution-growth method to make much more stilbene commercially available. Zaitseva’s team is continuing to work with INRAD to develop methods to further increase production rate, reduce cost, and meet the growing demand for these materials. Zaitseva foresees the solution-growth method could also be used to develop functional crystals from other organic solutions.

At sufficiently low cost, crystalline stilbene-based radiation detectors could protect sea- and airports, stadiums, power plants, and other large facilities, as well as help authorities interdict the smuggling of SNM. Accurate neutron detectors also have application in research settings including studies of particle and nuclear physics.