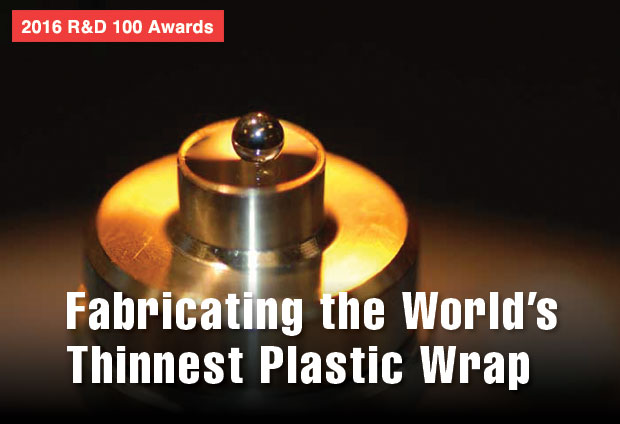 Thin polymer films are important for various applications, including optics, microelectronics, and micromechanics. At Lawrence Livermore, these films are crucial to experiments conducted at the National Ignition Facility (NIF), where they are used in targets to suspend deuterium–tritium fuel capsules inside tiny gold-plated cylinders called hohlraums. However, even extremely thin films have the potential to negatively affect target implosions during an experiment. “This freestanding film is similar to a ‘barely there’ plastic wrap, which must also be pliable enough to stretch over a container without breaking,” explains Salmaan Baxamusa, a materials scientist at Lawrence Livermore.

In industry, freestanding films are typically created by dissolving a polymer material into a solvent and then depositing that mixture onto a substrate. Lifting the film from its deposition substrate—a process known as liftoff—is perhaps the most critical step in fabrication, and several techniques have been developed to help facilitate this operation. One method uses a sacrificial interlayer between the film and the substrate to create a physical separation between them. The film and the substrate separate once a suitable solvent, typically water, dissolves the sacrificial layer. However, this approach has its limitations. First, the sacrificial layer must be deposited smoothly and uniformly, which becomes more challenging over large areas and difficult to accomplish consistently. Second, interactions between the sacrificial layer and the polymer can create imperfections in the film. Finally, film deposition must be compatible with the properties of the interlayer—if the interlayer is dissolved in water, then the film itself must be deposited using nonaqueous techniques.

Livermore scientists have used another separation method in which household glass cleaner is applied to the substrate as a surfactant. The glass cleaner can help the film release more easily, but the film can sometimes stick or stretch during liftoff. In addition, since household glass cleaner is a commercial product, the manufacturer could change the cleaner’s formulation, reducing its efficacy. To combat these problems, Livermore scientists, including principal investigators Baxamusa and Michael Stadermann, along with colleagues from General Atomics, have developed an R&D 100 Award–winning liftoff technique called polyelectrolyte enabled liftoff (PEEL). The method enables the creation of ultrathin films without the need for glass cleaner or a sacrificial material between the film and the substrate. 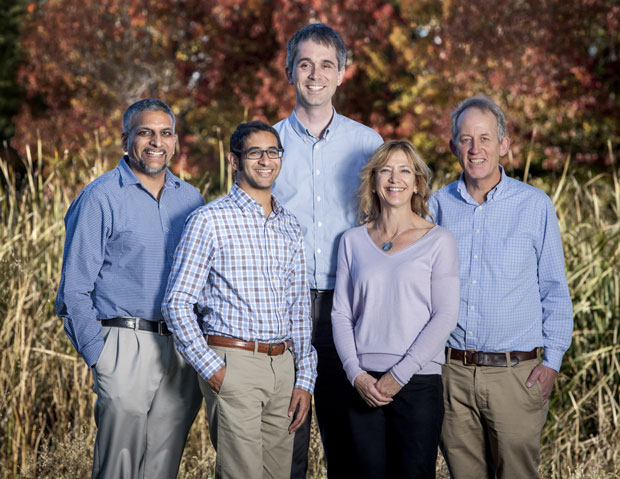 The new PEEL technique was discovered while the team was using a sacrificial material that happened to be positively charged. “I was going to reuse the wafer [substrate], but all the previously applied material had not washed off. When I dipped the substrate into water, the film lifted off beautifully,” says Baxamusa. More serious experimentation with this technique led the scientists to ultimately develop PEEL, which works via direct delamination of the film from the substrate.

Direct delamination requires the strain energy in the film to exceed the interfacial energy resisting separation, which is usually not possible for very thin films (those less than 45 nanometers thick). However, with the PEEL technique, scientists achieve direct delamination by pretreating the substrate with a layer of an electrically charged polymer known as polyelectrolyte. Scientists then rinse the substrate thoroughly with water, leaving behind a single layer of the polyelectrolyte that sticks tightly to the substrate. The chemistry of the modified surface decreases the interfacial energy resisting separation enough to easily delaminate films—even ones less than 10 nanometers thick.

PEEL technology provides a host of advantages over previous liftoff approaches. Namely, the method is self-optimizing, reproducible, and scalable to large areas; works reliably over numerous batches; and does not contaminate the water used to delaminate the film. In comparison to the use of sacrificial material, Stadermann says, “Normally, you add something to the substrate and then spread it out somehow, which results in a bumpy surface. PEEL always produces a smooth surface with no spreading required.”

The thin plastic films can support loads from milligrams to grams, and the method also allows a wider range of materials to be used in the process. “The PEEL technique can be used to dispense various materials at new, ultrathin thicknesses,” says Baxamusa. “The condition,” adds Stadermann, “is that you have to be able to dissolve the material in a solvent and cast it.” In addition, the substrate must have a positive or negative charge—a minor caveat considering that the most common substrates, glass and silicon, have negative charges.

Currently, PEEL is used to create compliant load-bearing polyvinyl-formal membranes for NIF targets. This capability is important to NIF because it can produce films less than 45 nanometers thick, which has allowed experimentalists to verify that film thickness directly affects the performance of imploding fuel capsules.

The new technological innovation could have other potential applications, including for wound healing, filtration, sensing, and catalysis. “The produced films could even be used as substrates for other processes, allowing us to deposit something on essentially nothing,” says Stadermann. The team aspires to further promote PEEL so that the technique may find additional uses. “We have developed a manufacturing method for creating ultrathin films that enables manufacturers to choose which polymers to use, with confidence that the materials will be compatible with the PEEL process,” says Baxamusa. Thanks to Livermore ingenuity, a technique for creating the world’s thinnest plastic wrap could have countless possibilities.