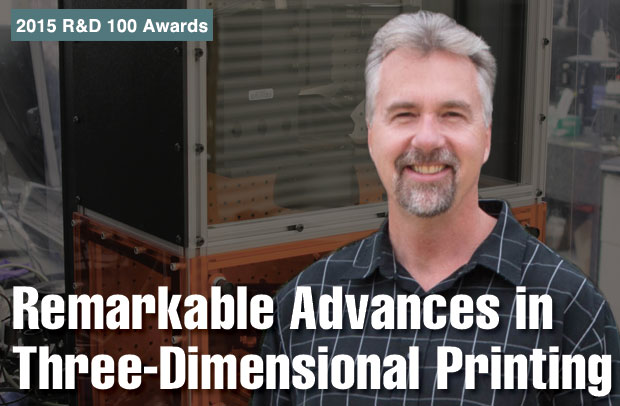 Over the last decade, additive manufacturing (AM) has burgeoned into a reliable, sought-after capability, enabling rapid prototyping and production of components for automotive, medical, and electronic applications, among others. A variety of techniques is used for AM, in which three-dimensional (3D) structures are built up by sequentially layering one material on top of another in a desired pattern. However, these methods are limited by the size of components they can produce, the scale of component features, or overall production speeds.

Moran’s creation is a new take on projection stereolithography, wherein ultraviolet (UV) light illuminates a digital photomask that reflects the light and an image of the component to be fabricated through a series of reduction optics onto a photopolymer liquid resin. As the resin cures, it hardens into the shape of the image. DLP-based stereolithography can create features with fine details at high speed, but only over a small area. Conventional stereolithography typically produces larger objects at lower resolution. These size and speed limitations usually result from the way 3D printing machines write the images that the computer generates to physically build an object. “Traditional stereolithography machines require either mechanical stage movement to make large parts (limiting speed and size) or the rastering of laser beams to expose pixels in series (limiting detail and speed),” says Moran. LAPμSL combines the extraordinary detail and speed inherent to DLP stereolithography with a larger scan area. The machine can produce bigger, more complex objects at a speed of 13.67 cubic centimeters per hour with feature sizes down to 10 micrometers.

LAPμSL uses a digital micromirror device (DMD) containing several hundred thousand microscopic mirrors arranged in a rectangular array that correspond to the pixels in the image. Each mirror can be set to reflect light onto or out of the system. In this way, the mirrors form the pattern of the image and then project the image onto the build plane. Typically, projection stereolithography systems cast the image onto a single area. The size of this image therefore determines the build area. Larger parts require the build area to be physically moved via mechanical means and are limited by the cost a user is willing to pay for mechanical stages and fixturing.

LAPμSL’s innovative setup eliminates the need for mechanical stage movement. A pair of scanning mirrors moves the DMD-produced image around a large build area, overlapping and piecing smaller images together like a mosaic. “Instead of having a single static exposure with millions of mirrors, LAPμSL scans over a wide area, multiplying and overlapping the high-resolution images,” says Moran. When all these “pieces” have been projected into their respective places on the build plane, they create a larger picture with significantly more detail. This mosaic technique is also what makes the device so fast. Spadaccini, the director of the Laboratory’s AM initiative, says, “LAPμSL is a huge step forward in bringing high resolution and high speed to additive manufacturing.” 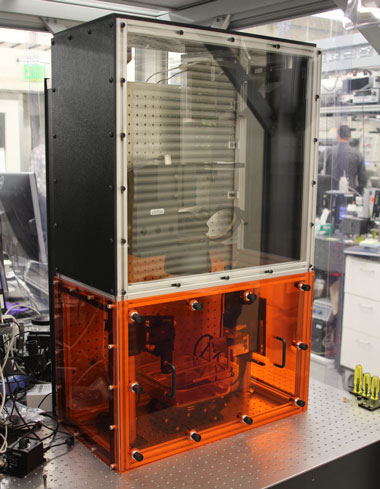 The LAPμSL system prints three-dimensional centimeter-size products with microscale features (up to 10 micrometers).

Another benefit of using LAPμSL is that it is not limited to producing a single large part. “As many parts as can fit on the build plane can be produced at once, making LAPμSL well suited for higher volume production,” says Moran, whose work was funded by the Defense Advanced Research Projects Agency. (Original work at Livermore on projection microstereolithography was funded by the Laboratory Directed Research and Development Program.) LAPμSL-produced structures can be used straight out of the system or as templates for additional processing in which the structure is coated with metal, ceramic, or other material. In addition, resin can be removed from a completed structure via chemical means or heat to create extremely light, hollow tube structures.

LAPμSL is currently only available for customers at the Laboratory and some external collaborators, but the technology has market potential. Moran, who was also presented with a 2015 Federal Laboratory Consortium Outstanding Technology Development Award for LAPμSL, says the technology has wide-ranging applications. “It can be applied to everything from medical and biotech to structural materials,” he says. “It’s exciting to see how the technology is evolving.”