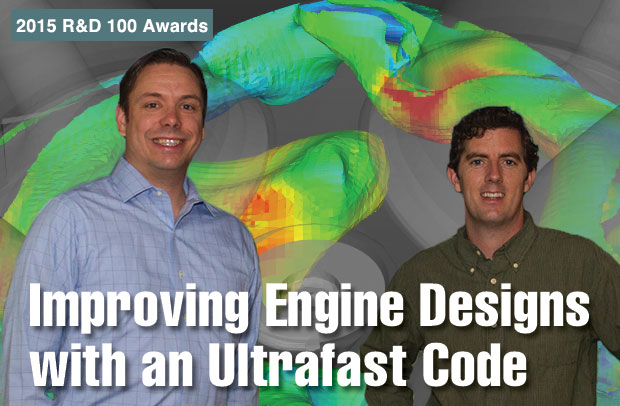 The complex interactions of intermediate chemical species can involve tens of thousands of reaction pathways. Consequently, even with high-performance computing systems, existing codes can require nearly a day to resolve a few seconds of reactions in a simplified simulation of gasoline combustion, thus limiting their usefulness in the engine-design process.

Livermore engineers Matthew McNenly and Russell Whitesides have developed an innovative computational method that significantly speeds up modeling the behavior of chemical systems. A 2015 R&D 100 Award–winning technology, the Zero-Order Reaction Kinetics (Zero-RK) software package simulates chemically reacting systems in a computationally efficient manner. “The Zero-RK solver allows orders-of-magnitude faster simulation of these systems than is currently available with other software packages but still maintains the accuracy of the results,” says McNenly. “The reduction in time-to-solution will be a huge benefit for those designing next-generation engines based on conventional fuels and newer biofuels, giving them insight into the chemistry of fuel reactions and producing results in days instead of months or years.”

Zero-RK calculates the thermo-physical properties, reaction-rate coefficients, and production rates necessary to simulate the evolution of species in a chemically reacting system. Species are the molecules representing the initial reactants, final products, and stable and unstable intermediates. In a natural gas engine, for example, the methane fuel reacts with oxygen to form the products water and carbon dioxide. This process can be modeled by a single global reaction, but greater accuracy is achieved by resolving the intermediate species that are formed during the fuel conversion—including stable ones such as carbon monoxide, formaldehyde, and hydrogen peroxide, and highly reactive radical species such as atomic hydrogen, atomic oxygen, and the hydroxyl radical.

Modeling such detailed fuel chemistry for transportation fuels has been limited in commercial combustor design because of the prohibitive computational cost. Zero-RK directly addresses this challenge by allowing design calculations to use more than 10 times the number of intermediate chemical species for the same computational cost as the best commercial solver. “In working with industrial representatives, we recognized that most companies do not possess or have access to the high-performance computing resources we have here at the Laboratory,” says McNenly. “We therefore concentrated on ways to make our algorithms more efficient, and took advantage of memory cache and vector arithmetic capabilities present in modern computing processors, so that Zero-RK can be sized to run on the workstations or small computing clusters typically available in industry.” 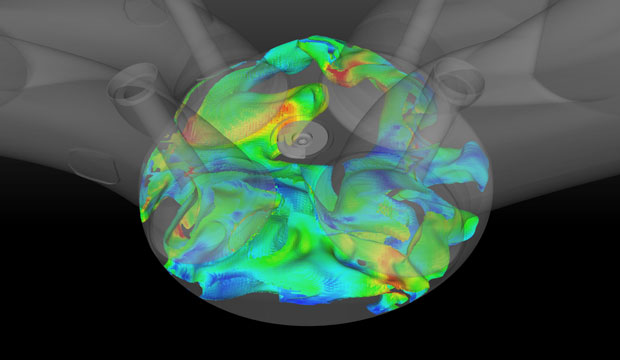 The local flame propagation speed in a gasoline combustion engine was simulated using Zero-RK as a plug-in to the computational fluid dynamics software ConvergeCFD.

The fundamental advance of Zero-RK is a numerical approach called sparse adaptive preconditioning (SAP). The SAP strategy uses iterative, nonlinear solvers to determine the future composition of a chemically reacting system. The solvers first make an educated “guess” at the solution, which is then checked by the user for accuracy. Successive refinements to the solution are then made to improve the accuracy until the user is satisfied with the quality of the result.

The key to the process is the creation of solution refinements. McNenly says, “Typically, these refinements resolve the dependencies of the individual chemical species with one another, creating a dense network of connectivity, similar to how different cables are run to a home for various technologies such as televisions, computers, and phones. The SAP approach determines the most important connections in the chemical network to create one with fewer connections, similar to a wireless router. This leaner, or sparser, network retains enough key features of the system to still make continuous refinements but at a much faster compute speed.” In addition, when solving for reacting systems involving large numbers of species, the SAP strategy solves for the future chemical composition of a system without any loss of accuracy. This approach contrasts with competing software packages that commonly use species-reduction techniques, in which species deemed “unimportant” to the solution of interest are removed to lower the simulation cost.

Zero-RK also incorporates efficient algorithms for evaluating species’ thermo-physical functions and chemical reaction rates. When coupled with sophisticated computational fluid dynamics (CFD) packages such as ConvergeCFD—developed by Convergent Science, Inc.—Zero-RK-based models can reduce the cost of chemistry simulations by a factor of seven for transportation fuels. The increased efficiency also allows combustion design engineers and researchers to include more detailed chemistry models in their simulations to better capture the fuels and reactor systems being analyzed.

Zero-RK can tackle a range of problems, from zero- and quasi-dimensional simulations of reactor systems up to full-scale simulations of industrial devices with complex three-dimensional boundaries. Zero-RK also has the ability to perform sensitivity analysis for developing chemical kinetic methods. Examples of its applicability include simulations of fundamental research devices such as shock tubes and rapid compression machines, and commercial applications such as internal combustion engines, gas turbines, rocket engines, and industrial burners.

For the largest system analyzed with Zero-RK, simulation time was reduced tenfold compared to the best competing commercial package. The software also achieved a four-thousandfold reduction in simulation time compared to the best free software alternative. These reductions translate directly to other reactor configurations. As an example, Zero-RK has already been used to develop a rapid compression machine model for Argonne National Laboratory that runs in minutes instead of days.

McNenly sees the potential for Zero-RK to benefit any field in which interaction networks are paramount, including nuclear energy, biological systems, plasma dynamics, and astrophysics. He concludes, “We believe this approach can be helpful to anyone who is looking at what happens when two things collide, when the possibility of that collision is driven by concentrations.”