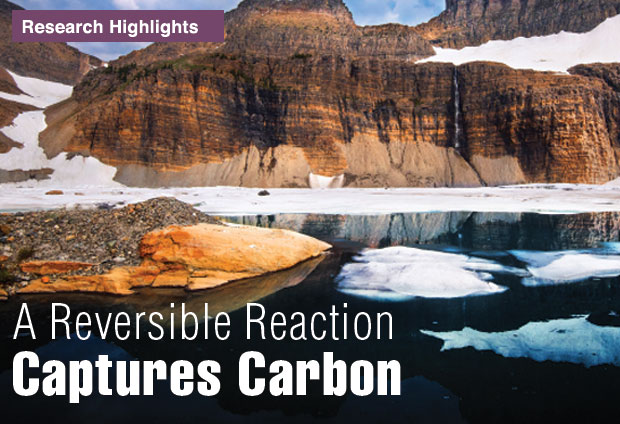 In Montana’s Glacier National Park, the number of glaciers has fallen from 150 to fewer than 30 in the past 100 years.

In 1910, Glacier National Park in Montana was home to more than 150 glaciers. Now, over 100 years later, that number has fallen to fewer than 30—just one of many signs that global climates are changing. Most scientists believe that human activities are at least partly to blame. Environmental changes that would normally take hundreds of years are happening in the span of a human lifetime, and if that rate continues, scientists see the possible repercussions including increasingly severe weather, wildlife extinction, and higher sea levels. 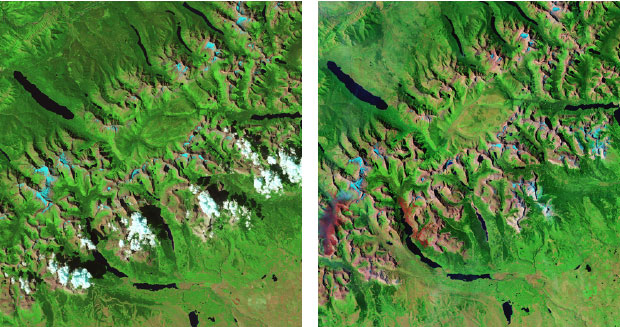 Satellite photos show the decrease in glaciers between August 1984 and August 2015. (Images courtesy of the National Park Service and NASA, respectively.)

To combat climate change and other anthropogenic environmental impacts, researchers have identified and analyzed major sources of pollution. One of those sources, and perhaps the most influential and well known, are greenhouse gases. Greenhouse gases include carbon dioxide (CO2), methane, nitrous oxide, and fluorinated gases. In the United States, CO2 constitutes approximately 82 percent of total greenhouse gas emissions, making it a critical factor in environmental research.

CO2 is released through a variety of human activities, from driving cars to producing electricity, but the biggest concern is CO2 emitted from large-scale sources such as power plants and industrial sites. In the United States, emissions from such large-scale sources account for more than 50 percent of total CO2 emissions. In fact, 2.8 billion tons of CO2 per year are generated by power plants alone. Reducing these emissions is one way to lessen the amount of CO2 added to the atmosphere, but determining how to reduce that output in actual practice has been problematic (see S&TR, May 2004, The Siren Call of the Seas: Sequestering Carbon Dioxide; and S&TR, May 2005, Locked in Rock: Sequestering Carbon Dioxide Underground). Ideally, CO2 would be separated from power plant flue gas before leaving the smokestack and entering the atmosphere, but this process—known as carbon capture—is prohibitively expensive (see S&TR, January 2017, Toolset Promotes Carbon-Capture Solution). Installation of a carbon capture and sequestration system increases power plant costs by 96 percent. In addition, conventional carbon capture technology, which typically uses amine solutions as sorbents, requires low temperature and pressure for CO2 separation and elevated temperature and pressure for regeneration. This process is energetically inefficient and actually increases the fuel consumption of coal-fired plants by 20 to 40 percent. 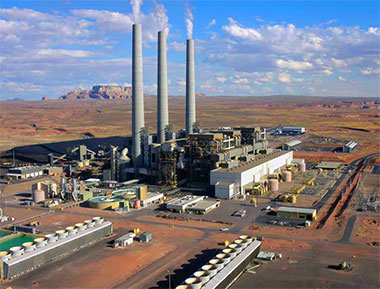 Current technology for separating carbon dioxide (CO2) requires drastic pressure and temperature changes in flue gas towers, seen in the center of the photograph. These expensive modifications can consume 25 to 40 percent of a power plant’s energy. New technology developed at Lawrence Livermore could be placed in a plant’s existing heat exchange and separate out hot CO2 instead of having to cool it first, thereby lowering costs. (Photo courtesy of the National Renewable Energy Laboratory.)

In response to this challenge, Lawrence Livermore materials scientist Patrick Campbell and Livermore postdoctoral researcher Maira Ceron Hernandez have developed a new CO2 separation technology in a Laboratory Directed Research and Development Program project. Their technology relies on the newly discovered phenomenon of a reversible CO2 reaction in molten hydroxide—a process that can capture carbon efficiently and cost effectively before it leaves the smokestack.

“The reversibility of the reaction is what really makes this technique special. It was not a known phenomenon before,” notes Campbell. The team stumbled upon the potential for reversible CO2 capture when former Laboratory employee Matt Merrill—the project’s original principal investigator—discovered past research on molten carbonate fuel cells. Campbell explains, “Several groups noticed the carbonate fuel cells were producing CO2 because water was involved. Matt had the idea to try to reverse CO2 absorption by recreating those conditions.”

In the scientific community, the reaction whereby molten potassium hydroxide, when combined with CO2, irreversibly converts to a solid-phase carbonate and water is well known. By experimentally varying temperatures and mixtures of hydroxides, the team discovered that molten hydroxides will reversibly react with CO2 to form carbonates at temperatures greater than 250°C, as long as enough water is present to balance the hydroxide system. “We found that the amount of water is really important to accomplish reversibility,” says Ceron Hernandez. The discovery, which defied conventional expectations, led the team to try to optimize the molten hydroxide phase with which the CO2 reacted. The ideal mixture would have a low melting temperature and a high dehydration temperature to keep the carbonates dissolved. The scientists found a lithium–sodium–potassium hydroxide eutectic mixture that fit the bill, with lithium added to increase carbonate solubility and sodium and potassium included to lower the melting point.

The major costs of traditional carbon separation derive from the drastic pressure and temperature changes needed to absorb and release CO2. The team therefore endeavored to develop a membrane separation system that would take advantage of the partial pressure gradient between CO2 on either side of the membrane (high on the flue gas side, low on the sweep gas side) to naturally drive separation. This membrane would contain the optimized hydroxide mixture which, by reacting with CO2 to form carbonates, would allow CO2 to be selectively removed from the flue gas.

For this process to be successful, the team needed a porous solid support material that could contain the highly caustic hydroxide melt in its pores via capillary forces while withstanding the high flue gas temperatures. Ceron Hernandez discovered such a candidate when she came across a 1992 article illustrating the use of ceramic materials with sodium hydroxide solutions. Using information gleaned from that article, Ceron Hernandez began to test potential ceramic materials and eventually settled on three options—yttria-stabilized zirconia, cerium oxide, and silicon carbide. In a tale reminiscent of Goldilocks and the Three Bears, Ceron Hernandez recounted her experimental process: “For cerium oxide, we couldn’t get the right pore morphology—the pores were too big. With silicon carbide, or commercial foams, not only were the pores too big, but we were also concerned about the lifetime of the material.” After multiple trials, Ceron Hernandez finally found the ceramic material that was just right—the yttria-stabilized zirconia. She further discovered that out of two different zirconia types—fully stabilized and partially stabilized—the partially stabilized zirconia performed the best in the presence of water. She says, “We weren’t sure why, but our theory is that the crystallinity of the partially stabilized zirconia affects the material’s resistance to molten hydroxide.” 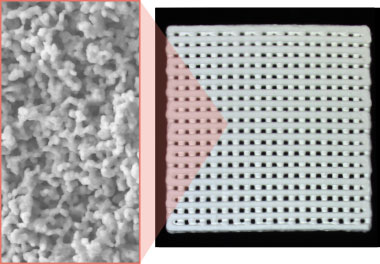 The ceramic porous material created with yttria-stabilized zirconia is heat and hydroxide resistant and is therefore ideal for use with flue gas temperatures of 300°C to 650°C. The production process is compatible with additive manufacturing techniques such as projection microstereolithography and direct ink writing (DIW). A DIW-produced part is shown.

With the best ceramic material identified, the team then tackled the challenge of producing the porous membrane. With no suitable membranes commercially available, the team members developed their own. “We were inspired by another Laboratory scientist, Eric Duoss, and his work with additive manufacturing,” explains Campbell. The duo modified existing Laboratory methods for their particular application. Ceron Hernandez adds, “Other Livermore scientists were printing full density ceramic parts using a polymer resin loaded with ceramic particles. We needed the porosity, so we just adapted their methods.” Taking advantage of the Laboratory’s additive manufacturing technology, Campbell and Ceron Hernandez managed to produce porous ceramic materials compatible with additive manufacturing techniques such as direct ink writing and projection microstereolithography. 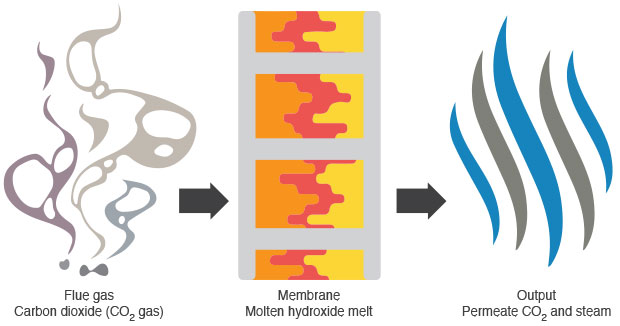 The dual-phase membrane technology allows CO2 to be continuously separated. A gas separation membrane containing the optimized molten hydroxide solution held in a porous material selectively turns CO2 into carbonates. These carbonates are then transported across the membrane by diffusion, which is driven by the difference in CO2 partial pressure on either side of the membrane. Water—as steam—on the sweep (right) side is critical for enabling the reverse reaction, that is, recovering the captured carbon for storage by converting the carbonate back into CO2.

To make the porous membrane, the team put a mixture of ceramic nanoparticles into a polymer resin, turning the material into a plastic. After sintering and burnout, pores had formed where the polymer had been. “We are sintering to the point where the particles are lightly fused together, leaving residual porosity,” says Campbell. The team surprisingly had no difficulties embedding the hydroxide into the porous ceramic material. Campbell says, “The hydroxide flowed into the pores like water in a paper towel. We didn’t even need a vacuum to pull it through.” With a robust membrane enabling continuous separation, the sequestration technology eliminates expensive infrastructure adjustments, proving both efficient and cost effective. Campbell states, “Because separation occurs at a high temperature, we don’t have to heat the system back up. Our membrane is perfect for placing in a power plant heat exchanger, where steam exists on one side and exhaust on the other, which naturally separates the CO2. This approach helps lower costs.” 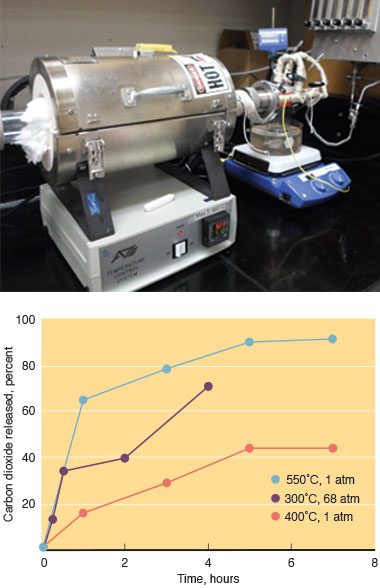 (top) Tests conducted in the tube furnace shown indicate that carbonate is converted to hydroxide upon exposure to humidified nitrogen, releasing CO2. (bottom) At atmospheric pressure (1 atm), CO2 release was highest at 550°C, but by increasing steam pressure to 68 atm, the same conversion could be achieved at 300°C, significantly reducing energy costs.

Campbell’s and Ceron Hernandez’s technology has wide applications, including more than just large-scale carbon capture and sequestration. Campbell says, “In addition to applying the technology to large point sources of CO2—such as cement and steelmaking factories—the porous materials themselves have their own applications.” Another unique aspect of the project was the team’s composition, spanning myriad disciplines. Marcus Worsley, a project consultant, has expertise in porous materials; Matt Merill is an electrochemist; Sangil Kim, a former Laboratory employee assisting on the project, has experience with high-temperature membrane characterization; and Ceron Hernandez and Campbell are chemists. Swetha Chandrasekaran conducted the direct ink writing. Campbell states, “This is a cross-disciplinary project. You need extensive experience in different areas, and all that experience was needed to make the project successful. The Laboratory was perfect for that because it fosters a unique collaborative environment.”

Moving forward, the duo plans to publish their research and focus on rolling out the technology. They have already filed three records of invention and two patent applications. “The big picture is that we’re all worried about carbon dioxide,” Campbell says. “Currently technology for capturing CO2 from power plants exists, but the capturing process is very expensive and energy intensive. Our new process provides a more efficient and lower cost CO2 separation platform.”