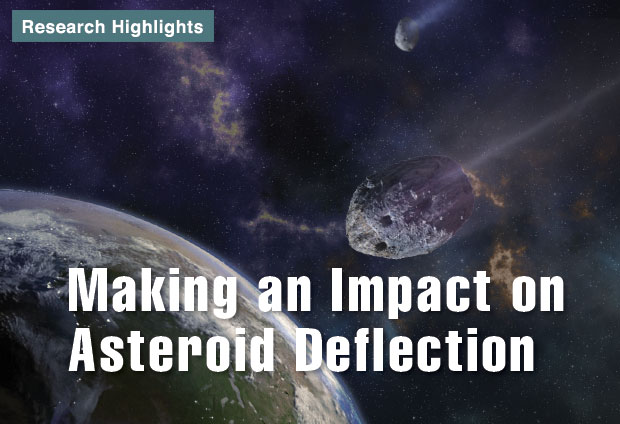 Making an Impact on Asteroid Deflection

When it comes to asteroids—rare but potentially cataclysmic threats to global security—the best defense is a good offense. The most hazardous planetary objects are near-Earth asteroids (NEAs), those found to be in orbits that allow them to enter Earth's neighborhood. Most large NEAs have been identified and plotted, but much remains unknown about smaller bodies, including how many exist. NEAs ranging in size from only tens to hundreds of meters are difficult to detect because they are often too small and dim for telescopic observation. The National Aeronautics and Space Administration’s (NASA’s) Planetary Defense Coordination Office oversees detection and follow-up investigations of these objects as they move through the solar system, watching for one that could potentially collide with Earth.

Earth-bound objects only a few kilometers across have already caused global catastrophes, such as the impact that wiped out all nonavian dinosaurs and many other species 66 million years ago. More recently, the Chelyabinsk meteor measured only 20 meters in diameter before it exploded over the eponymous Russian city in 2013, injuring hundreds of people and damaging many structures. Livermore’s planetary scientists Megan Bruck Syal, Paul Miller, Michael Owen, and other members of their interdisciplinary team are researching ways to prevent asteroids from reaching Earth in the first place. The strategy is known as asteroid deflection.

What began in 2011 as a project funded by the Laboratory Directed Research and Development Program has grown into ongoing activity that includes modeling various asteroid deflection methods. Now, Lawrence Livermore is collaborating with NASA and the Johns Hopkins University Applied Physics Laboratory (APL) to support a NASA mission known as the Double Asteroid Redirection Test (DART)—a proposed full-scale asteroid deflection test tentatively scheduled to launch in 2020. 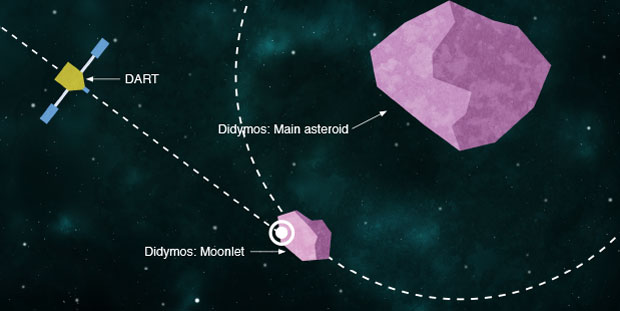 The proposed Double Asteroid Redirection Test (DART) will provide the first test of the deflection of an actual asteroid using kinetic impact. Earth-based telescopes will observe the binary asteroid system Didymos as the DART spacecraft impacts the smaller of the two asteroid bodies, which is only 150 meters across.

Deflection has become a significant area of focus in planetary defense research. Livermore-directed simulations of deflection by means of nuclear explosions have yielded valuable understanding of scenarios in which a large asteroid bears down on Earth with little warning. (See S&TR, December 2009, Too Close for Comfort.) Additional Laboratory research includes predictive modeling using energy and density inputs based on actual NEAs observed in the solar system. (See S&TR, December 2013, Averting Impact: Modeling Solutions to Prevent Asteroid Collisions.) The Laboratory’s planetary defense team builds on these efforts by modeling a nonnuclear deflection method known as kinetic impact.

The kinetic impact method involves ramming an impactor—an uncrewed spacecraft—against an asteroid to transfer momentum that pushes the asteroid away from its Earthbound trajectory. If undertaken sufficiently far in advance, the most effective direction in which to move an asteroid is along the direction of its orbit. Over time, as the asteroid continues along its path, deflection away from the point where the craft nudged it will accumulate. The objective is to permanently alter the asteroid’s orbit so that the distance between it and Earth is large enough to assure safety.

Rockets can transport only a limited amount of mass to an asteroid, thus kinetic impact is most feasible against NEAs less than a few hundred meters across, as well as those with warning times of at least a decade before their orbits intersect Earth’s. Even within these parameters, the variables associated with the kinetic impact method are numerous. The research requires experts from many fields working together to build models incorporating realistic asteroid properties and to run simulations on large computer clusters. Bruck Syal states, “The Laboratory is the perfect place to attack a problem like this.”

The Livermore team uses Spheral, an open-source code, for many of its kinetic impact simulations. Bruck Syal notes, “To model an asteroid’s response to deflection, we need a very good shock physics code and very capable computing resources.” Run on Livermore’s RZ-Zeus and RZ-Merl supercomputers, Spheral is an adaptive smoothed particle hydrodynamics code that allows researchers to perform meshless simulations. With this approach, they can focus on local effects of the spacecraft and its target asteroid without the computational burden of “meshing” variables from the surrounding space. In this way, the team can also understand what happens to the pieces, known as ejecta, that break off at the point of impact. As Spheral developer Owen elaborates, “The code lets us model the physics of failure and fracture with a great deal of accuracy.” 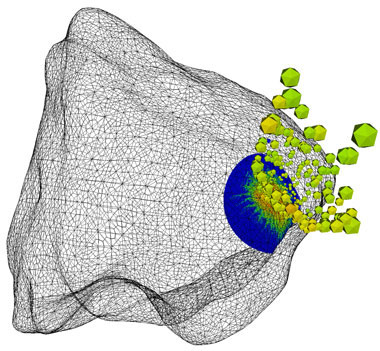 Laboratory researchers are using Spheral, an adaptive smoothed particle hydrodynamics code, to model the asteroid Golevka as it is impacted by a 10,000-kilogram mass traveling at 10 kilometers per second. Ejected pieces breaking away from the asteroid add to the total momentum imparted to the body, helping further nudge it away from its Earthbound course.

In addition to size, predictive modeling must take into consideration a host of other variables, such as the asteroid’s composition, porosity, shape, rotation, and mass; the impactor’s velocity and angle of impact; and velocity of the resulting ejecta. These factors and their myriad combinations underscore just how challenging modeling is in kinetic impact investigations. Bruck Syal points out, “Simulations require considerable time to separate out the effects of all these variables.” For the purpose of investigating the effects of different asteroid properties, the team assumed a 1,000-kilogram aluminum sphere as a simplified spacecraft model and NEAs composed of silicon dioxide, a material frequently used in planetary impact modeling.

One critical variable the team studied is asteroid porosity. They found that an asteroid’s porosity and density are more significant than its composition in determining the effects of kinetic impact. Porosity in the asterioid absorbs energy as compaction occurs, resulting in less ejecta being thrown off at the impact site. However, because a highly porous asteroid has less mass for a given size, the impactor would need to impart less momentum to deflect the body.

Momentum is the quantity of most concern in kinetic impact simulations, but it is not only the momentum imparted by the impactor that interests researchers. Because asteroids have little gravitational pull, ejecta escaping away provide additional or “bonus” momentum to the asteroid. Without this help from the ejecta, the momentum delivered to the asteroid would come from the impactor alone, as in a lump of clay hitting a solid object. A key objective of the team’s work is to estimate the amount of bonus momentum generated by a kinetic impact.

How fast the impactor needs to travel and where it needs to hit also depend on the asteroid’s size and shape. “Accounting for realistic shapes makes kinetic impact much harder to model,” says Owen. An ideal scenario, in which the impactor hits a perfectly smooth, round asteroid dead on, is unlikely. Local shape effects—the influence of specific nooks and crannies at the site of impact—could cause ejecta to move in different directions away from the impact crater, redirecting thrust and thereby reducing the bonus momentum. Using the dimensions and irregularities of a real asteroid named Golevka, the team modeled 10,000-kilogram impactors colliding at 10 kilometers per second and varied the site of impact. Results indicated that topography, such as a sloped or concave surface, may dampen the effectiveness of the kinetic impact method. However, accounting for such irregularities—that is, solving for the bonus momentum in simulations—would inform impactor specifications in a real deflection event. 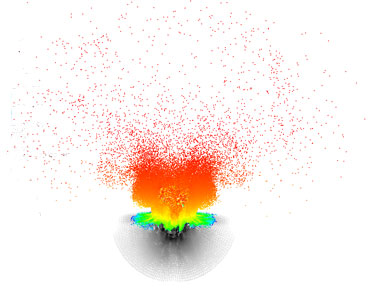 In this simulation for the DART mission, a 400-kilogram impactor has hit Didymos’s moonlet at 6 kilometers per second. Spheral’s meshless numerical method allows the Livermore team to evaluate the evolving ejecta velocity field. Here, the innermost 13 meters of ejecta from the impact point are modeled, with the grayscale cutout indicating accumulated strain inside the asteroid (below escape speed) and colors denoting velocities exceeding the 5-centimeter-per-second escape speed.

The Laboratory’s simulations highlight the importance of continued research in planetary defense and illuminate the field’s uncertainties, all of which will come under scrutiny ahead of the DART test. DART will target Didymos, a binary asteroid composed of a main asteroid (approximately 700 meters across) around which orbits a smaller moonlet (approximately 150 meters across). As Earth-based telescopes carefully observe and characterize the system, DART will impact the moonlet at 6 kilometers per second—more than 13,000 miles per hour, or more than 25 times an airliner’s cruising speed. The impact is expected to reduce the moonlet’s velocity by approximately 1 millimeter per second—a decrease that will be quantifiable from Earth. “DART provides a rare opportunity to test the kinetic impact technology at full scale,” notes Bruck Syal.

In preparation for DART, the Lawrence Livermore team will continue investigating various impact scenarios, including benchmarking and simulations of Didymos’s variables. When DART hits the Didymos moonlet, the impact will alter the object's orbit around the larger asteroid. “This will be the first such test of deflection for planetary defense purposes,” explains project lead Miller. Ground-based telescopes will monitor changes to the moonlet’s orbital period, providing an indication of how much deflection occurred and, therefore, how much bonus momentum was imparted. DART, if approved to go forward, will test the efficacy of the kinetic impact method, further strengthening the foundation of NEA deflection as a viable planetary defense strategy against a potentially catastrophic threat.