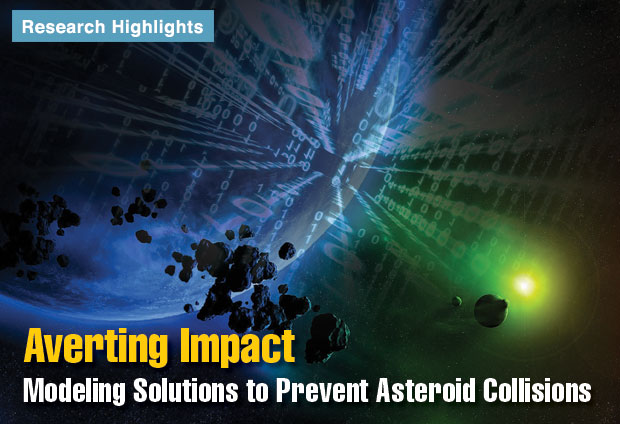 The story is common in science fiction: A large asteroid is on a collision course with planet Earth, and scientists are working to save the world. In February 2013, the scenario became a little less fictional when a meteor nearly 20 meters in diameter streaked through the sky above Russia. The midsized object packed quite a wallop, exploding in an air burst over the city of Chelyabinsk. The resulting shock wave damaged more than 7,000 buildings in six cities across the southern Ural region. About 1,500 people were treated for injuries, many caused by glass shards from shattered windows. The atmosphere absorbed most of the object’s energy, equivalent to about 440 kilotons of TNT (trinitrotoluene), nearly 30 times more energy than was released by the atomic bomb detonated at Hiroshima.

The 2013 event demonstrated that an asteroid impact, although unlikely, is a real threat. Since the mid-1990s, scientists at Lawrence Livermore have been supporting government agencies such as the National Aeronautics and Space Administration (NASA) by evaluating different methods for preventing such a catastrophe. (See S&TR, December 2009, Too Close for Comfort.) Results from a project led by Livermore physicist Paul Miller are helping researchers better understand how an astronomical object headed toward Earth can be deflected or disrupted.

“Many strategies have been examined for dealing with a hazardous asteroid or comet that has the potential to impact Earth and significantly damage a region,” says Miller. One proposal involves colliding a spacecraft into the asteroid to deflect its course. Another approach would use lasers to melt and ablate portions of the object’s surface, with the resulting jets of material providing a thrust to change the object’s orbit.

Of all the mitigation strategies, the most effective approach is using a nuclear explosive to either disrupt or deflect the asteroid. In disruption, the explosive acts like a hammer blow, smashing the asteroid into pieces that then fly off course or are too small to cause damage. In deflection, the energy deposited by the nuclear blast heats the asteroid’s surface to a temperature that vaporizes material, thus nudging the asteroid in the opposite direction. According to Laboratory astrophysicist David Dearborn, a nuclear explosive would impart 10 to 100 times more momentum to the object than other proposed methods. Says Miller, “For scenarios with little warning time before impact or when the object is large, nuclear explosives often are the only option.”

This project, which is funded by the Laboratory Directed Research and Development Program, draws on the expertise of nearly a dozen Livermore scientists and includes collaborators from NASA, University of Colorado, University of California at Santa Cruz, Jet Propulsion Laboratory, and other national laboratories. The team is focused on developing the modeling capability to evaluate nuclear approaches that will deflect and break up an incoming asteroid. By better understanding the available threat-mitigation options and their outcomes, the researchers will improve confidence in the effectiveness of a nuclear response should the need arise.

“The Laboratory is one of a few places worldwide with the simulation capability and the knowledge of nuclear-explosives effects to conduct this research,” says Miller. The scenarios considered include deflecting a dense solid asteroid by striking it at the apex of its orbit or dispersing a “rubble-pile” asteroid—an agglomerate of boulders, rocks, and dust. By applying uncertainty quantification techniques, radiation hydrodynamics codes, and advanced algorithms, the team is modeling energy coupling to an asteroid, how that object’s material composition affects energy deposition, and what path the debris will take as it is dispersed.

Asteroids and comets vary in size, density, composition, dynamics, and internal structure. The Livermore team is thus considering cases that span observed behavior and properties. “Asteroids are notoriously nonspherical,” says Kirsten Howley, a postdoctoral researcher working on the project. “Different shapes and materials can affect how and where the energy from an explosion is deposited and distributed.” Characterizing an object’s surface material helps researchers determine how deeply energy would be deposited and to accurately model what happens to that material once heated with energy from a nuclear explosive. “We are dealing with complicated phase changes, material that is solid, liquid, and vapor at different times and depths,” says Howley. “The more we know about an asteroid’s composition, the better our results.”

Bring on the Computers

The team is using different simulation capabilities to examine the physical processes involved in a nuclear detonation, the subsequent energy production and deposition, and the material’s response. Says Miller, “We are faced with a wide range of length and timescales, and the behavior we are modeling is described by plasma physics, fluid dynamics, and solid mechanics. We also need to link the code results, so we can track what happens through the various stages.”

One of the team’s early simulations made by Ilya Lomov modeled a 500-meter-diameter asteroid with a realistic shape as it was deflected by a 750-kiloton nuclear explosion, which deposited 150 kilotons of energy. “Most of the energy output in a nuclear detonation comes in the form of neutrons and x rays,” says Laboratory astrophysicist Seran Gibbard. “We are especially interested in neutrons because they penetrate deep into material.”

She notes that the dominant force in a deflection attempt would come from the surface material that is melted or vaporized. The momentum generated for the deflection would be closely tied to energy-coupling issues and the material’s equation of state. Results from the team’s simulations indicate that bulk porosity, which affects a material’s strength, is an important factor in the amount of damage and cratering induced on an asteroid’s surface by a hypervelocity impact.

“We want to estimate the minimum momentum in various scenarios to know how much push a nuclear device can deliver in different situations,” says Livermore scientist James Elliott. “For these calculations, we considered the size, shape, and composition of the asteroid and the energy from the explosive.”

The researchers began with a one-dimensional simulation using quartz (silicon dioxide), a relatively well-understood mineral with high melting and vaporization energies. Determining the proper mesh size for the hydrodynamics simulation is important to avoid large uncertainties while keeping the run time reasonable. A mesh resolution of less than 0.2 centimeters to a depth of at least 1 meter covered most energy density scenarios. Once the researchers determined the lower bounds on the blowoff momentum in one dimension, they extended the results to two and three dimensions and to other materials. “We are now expanding the work to include various sources, such as photons, and a range of asteroid compositions,” says Howley.

An alternative to deflection is disruption, or blasting the object to bits—an approach that would work well with small asteroids or those composed of loosely bound rock fragments. When the team modeled the disruption of a monolithic iron sphere 50 meters in diameter and with 5 percent porosity, the cloud of fragments expanded so much that few of them impacted Earth, and no pieces larger than 3 meters in diameter remained. Fortunately, Earth’s atmosphere protects the planet from objects less than about 10 meters in diameter.

When a simulated blast was applied to a rubble pile, the shock set the loosely aggregated boulders in motion. “Our simulation captured the behavior inside each boulder as well as its interaction with its neighbors,” says computational physicist Eric Herbold. Material near the energy-deposition site vaporizes, melts, or fails, contributing to blowoff that imparts momentum to the assembly of boulders. 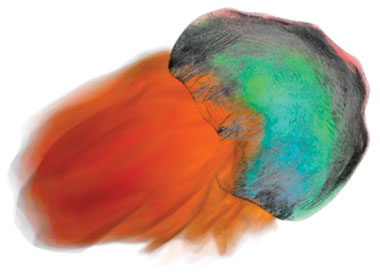 GEODYN simulated this scaled model of the Geographos asteroid, which shows a realistically shaped object about 500 meters in diameter, driven by a 750-kiloton nuclear explosion that deposited 150 kilotons of energy. Orange indicates variations in the ejecta’s energy density, the blue–green hues show deviatoric stress levels, and gray represents damage. 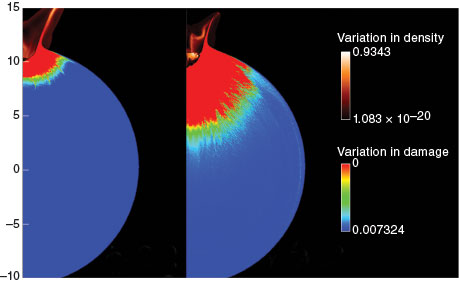 GEODYN simulations show the effect of bulk porosity on an object’s response to a hypervelocity impact. The blue–red color scale depicts the degree of damage inflicted on an object with bulk porosity of (left) 20 and (right) 30 percent. A material’s strength decreases as porosity increases, which affects the amount of damage and cratering.

Simulations also modeled debris dispersal after the disruption, allowing researchers to observe how fragments spread over time and space. The object’s orbit is crucial in determining the time available, the difficulty involved in sending a spacecraft to the object, and the debris dispersal paths following the explosion. “We also have to pin down uncertainties in the deflection velocity after the disruption event because they determine the probability that fragments might impact Earth,” says Wasem. He notes that an actual deflection attempt would have multiple sources of uncertainty. “We may not have accurate information on the object’s composition or its total mass. These factors increase uncertainty in the calculated deflection velocity delivered to the object, which can create a final positional error associated with the attempt.”

To evaluate the propagation of errors, the team created a fictitious scenario using the orbital parameters of 2011 AG5, a 140-meter-diameter near-Earth asteroid. Simulation results showed that deflection attempts are more effective at certain points in the object’s orbit, for example, when an asteroid is closest to the Sun. Varying a spacecraft’s orbital parameters or launch date also changes the confidence level for mission success. 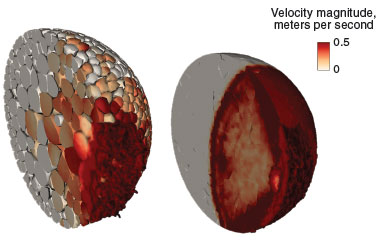 GEODYN-L simulations compare two realizations of porous asteroids, each with 2,380 individual pieces in a (left) rubble pile and (right) fractured consolidated configuration. The incident wave is at approximately the same location at (left) 7.1 and (right) 0.9 seconds, indicating a large contrast in response. Material near the energy deposition region vaporizes, melts, or fails, contributing to blowoff that imparts momentum to the remaining assembly of boulders. 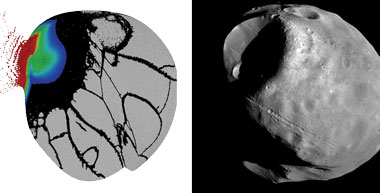 Researchers used the SPHERAL code to model a high-speed impact such as the one that created the large Stickney crater on Phobos, a moon orbiting Mars. (left) Results from the simulation compare well with (right) a photo of the crater.

The research team extensively tested the algorithms and codes used in the work. A large-scale validation problem integrated several aspects of nuclear deflection and disruption to model the impact that created the large Stickney crater on Mars’s moon Phobos. “The problem is challenging,” says Miller. “Previous attempts to simulate the crater formation resulted in completely destroying the virtual Phobos.” Using SPHERAL, Livermore scientist Mike Owen and Jared Rovney, a summer student from Yale University, modeled the interaction of a high-speed impactor with Phobos. The results compared well with photos of the crater, thus helping to validate the methodology.

Future work will consider comets, which tend to be much bigger than near-Earth asteroids. “Comets are less likely to impact Earth than an asteroid, but they are still a serious concern,” says Miller. “Because of their size, they have the potential to cause global devastation or even extinction. And they are typically discovered with little warning time.”

The asteroid deflection and disruption project has been made possible by the Laboratory’s broad science, technology, and engineering expertise. Says Miller, “We have the capabilities necessary to address this problem. Should the world be faced with an impact event, the question will be how best to stop it. Our work will provide decision makers with options they can consider to help them meet the challenge.”