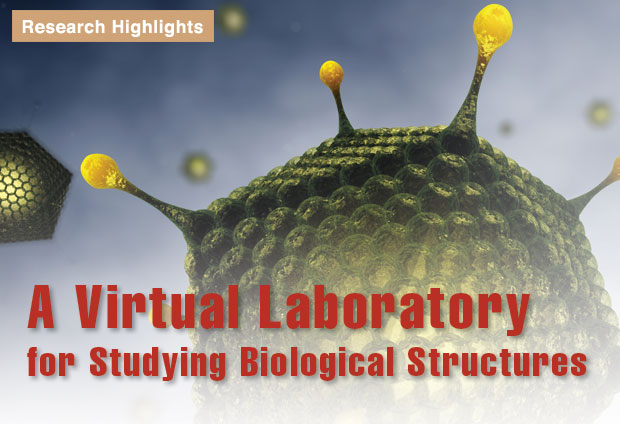 The structure of complex biological macromolecules, such as proteins and DNA—the building blocks of life—can provide essential clues about their biological function. Since the early 20th century, x rays have been used to study the underlying crystalline structure of materials. More recently, researchers have turned to powerful x-ray free-electron lasers (XFELs) for probing the internal structure of proteins. Using XFELs, scientists can obtain diffraction patterns from small (submicrometer) protein crystals at room temperatures to build high-resolution three-dimensional (3D) images of their structures, even capturing the dynamic changes of the material on short timescales in response to external stimuli. (See S&TR, December 2015, Elusive Protein Structures Revealed by Advanced Lasers.)

The SLAC National Accelerator Laboratory’s Linac Coherent Light Source (LCLS)—the world’s most powerful XFEL—has become a key tool for studying complex biomolecules. The facility has already been used to image structural changes in light-absorbing proteins and to characterize dense materials, including graphite. Researchers will take a major step forward in structural biology research when they start using XFELs to image single biomolecules that comprise viruses and bacteria. This capability is not yet possible with conventional experimental methods, either because the biomolecules are too small, noncrystalline, or cannot be expressed in a large enough quantity.

As part of SLAC’s Single-Particle Initiative, Lawrence Livermore researchers and LCLS collaborators are working to determine, over the next decade, if atomic-scale imaging of individual biomolecules is possible, and if so, how to design and optimize future experiments. As part of this effort, Laboratory scientists and computational experts are using Livermore’s high-performance computers to develop, adapt, and run advanced computer codes that can accurately model the experimental parameters needed for this research.

XFELs use bunches of individual electrons moving through a vacuum chamber at nearly the speed of light to create x-ray beams that bombard a target material. During an experiment, the beam’s photons excite the electrons in the target, and some photons scatter in a distinctive pattern, called a diffraction pattern, that relates to the material’s structure. The diffraction pattern is recorded using x-ray detectors, and computer software pieces the individual snapshots of the material’s internal movement during its exposure to the high-intensity radiation into a 3D image. This image helps determine the material’s molecular structure.

In the early 2000s, Livermore physicists Stefan Hau-Riege, Richard London, and Abraham Szöke began modeling the x-ray imaging process with a focus on understanding and alleviating the effects of radiation damage sustained by the molecule. According to Hau-Riege, although Livermore’s simulation expertise is supported by a host of novel codes, none of them had all the capabilities needed to accurately simulate the processes in radiation-exposed single biomolecules. To help remedy this issue, they adapted existing hydrodynamics and molecular dynamics (MD) codes to account for the relevant physics considerations necessary for atomic-scale imaging.

Using these codes to simulate future LCLS experiments on single biomolecules, Hau-Riege and collaborators have established a virtual laboratory that uses Livermore’s high-performance computers to mimic extreme states of matter and address mission-relevant science questions. Simulations lessen experimental costs by allowing researchers to more quickly optimize parameters, such as beam duration and wavelength, which also helps researchers to best use their allocated laser time and increase the likelihood of an experiment’s success. 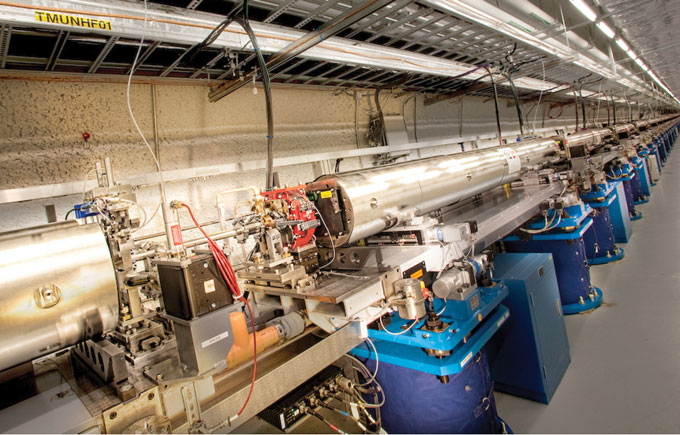 The SLAC National Accelerator Laboratory’s Linac Coherent Light Source (LCLS)—the world’s most powerful x-ray free-electron laser (XFEL)—is the first machine of its type to probe matter with hard x rays. In the LCLS Undulator Hall (shown here), short pulses of electrons travel back and forth through a 100-meter-long stretch of alternating magnets. The process produces the extremely bright x rays that are used to image structural changes in complex biomolecules, such as proteins.

The foundation for the Laboratory’s simulation work on single biomolecules was Livermore’s domain decomposition molecular dynamics (ddcMD) code. (See S&TR, July/August 2006, Keeping an Eye on the Prize.) The code uses the fundamental properties of particle interactions to identify a material’s macroscopic properties such as equations of state, conductivity, and diffusivity. “We use what we know about a material’s fundamental properties to improve our understanding and simulations of its macroscopic properties,” says Livermore physicist Frank Graziani, who has led the decade-long effort—called the Cimarron project—to improve ddcMD for plasma modeling.

Traditional Laboratory hydrodynamics codes, such as HYDRA or CRETIN, were designed to model the evolution of systems whose electrons are at equilibrium, meaning that their statistical properties do not change over time. When an x-ray laser radiates a target, the electrons in the material are knocked far out of equilibrium—some electrons are very fast, others are slow, and some electrons leave the molecule and thus increase its charge. Material in such an excited state transforms into a plasma. “Livermore has many simulations that are suitable for modeling plasma experiments,” says Hau-Riege, “but with these established simulations, we found a discontinuity between studying native molecules (those in their original functional state) and molecules that have become part of a plasma by the intense XFEL radiation. Understanding plasma dynamics for this application requires us to study time-dependent physics during the transition.”

To address this issue and better match simulated processes with those that happen in an XFEL experiment, the team, in collaboration with Jon Weisheit from the University of Pittsburgh, adapted the ddcMD code to incorporate atomic physics phenomena. (This work was performed as part of the Cimarron collaboration.) The new code tracks every atom and electron to characterize the microphysics of the plasma. Of particular interest is the interaction of radiation with atoms and electrons—one of the least understood aspects of XFEL experimental data.

The team has exploited other microphysics codes and proof-of-principle experiments to verify the empirical models used in their adapted MD code. Similarly, because this code was co-developed by several groups at Lawrence Livermore, it can be used to validate models for other Laboratory programs, such as those in the Weapons and Complex Integration Principal Directorate, in addition to being useful for simulating diverse LCLS experiments. Hau-Riege says, “It’s quite impressive that the plasma codes we use for programmatic applications can be applied to a variety of research areas.” 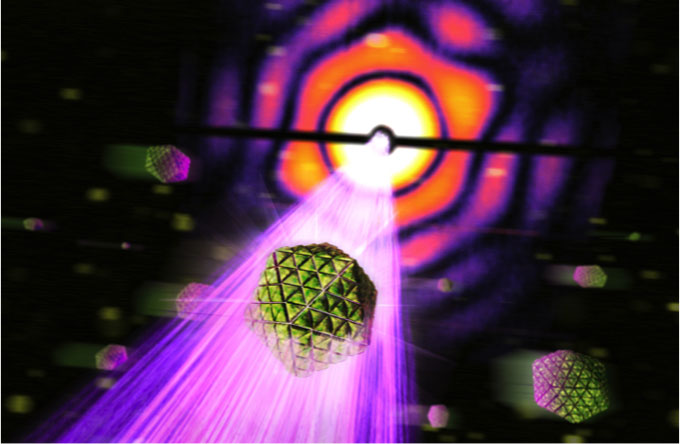 As part of SLAC’s Single-Particle Initiative, Livermore scientists are helping develop an advanced capability for imaging individual biomolecules, which comprise viruses and bacteria, using the LCLS XFEL. In this artist’s rendering, a 20-sided structure from a bacterial cell, called a carboxysome, is struck by an LCLS x-ray pulse (purple). (Image courtesy of SLAC’s LCLS.)

Single biomolecule imaging would enable a system’s evolution to be tracked at the smallest relevant time and length scales. However, obtaining high-resolution diffraction patterns for such materials is part of the challenge of making this capability a reality. “Since the diffraction pattern is never a direct image, it can still be skewed,” explains Hau-Riege. “With too much intensity, the material experiences more damage, and the resulting diffraction pattern becomes distorted. On the other hand, with too little intensity, we cannot record a clear pattern.” Adding more photons to the beam improves the clarity of the diffraction image, but it also increases the temperature of the material, which causes image distortion.

Furthermore, materials typically destruct when radiated by intense XFEL beams, thus sometimes destroying the material before the diffraction pattern can be captured. The short, intense LCLS XFEL pulses should help researchers acquire diffraction data faster and more efficiently prior to the material’s destruction. Hau-Riege and his team will conduct simulations of matter–radiation interactions to tailor future experimental parameters to ensure high-quality diffraction patterns can be recorded.

Harnessing state-of-the-art resources and expertise, collaborations between national laboratories and academic institutions often lead to breakthrough scientific research. As part of SLAC’s Single-Particle Initiative, Livermore researchers and LCLS colleagues will use advanced high-performance computer codes and modeling to bring single biomolecule imaging closer to fruition. Such a capability will help advance research in many disciplines including biodefense, medicine, and energy.