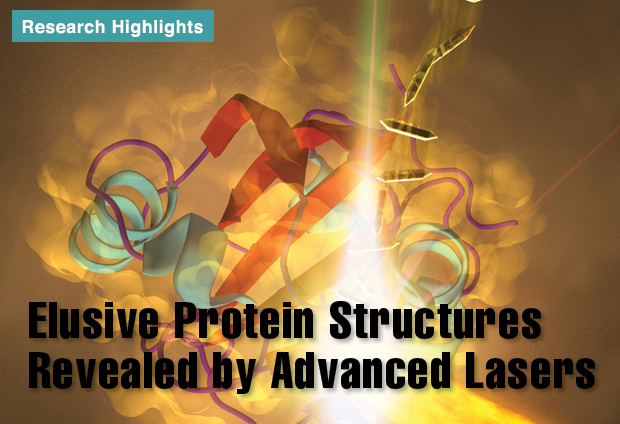 In this artistic rendering, samples of crystallized photoactive yellow protein are sprayed into the path of the x-ray laser beam of SLAC National Laboratory’s Linac Coherent Light Source (LCLS). The proteins are simultaneously exposed to blue light to trigger shape changes in the protein’s molecular structure—changes captured by the ultrashort laser pulses. (Image courtesy of SLAC.)

More than a billion times brighter than synchrotron sources and capable of producing x-ray pulses a quadrillionth of a second long, x-ray free-electron lasers (XFELs) are opening doors onto scientific realms previously closed to investigation. From exploring matter under the extreme conditions found in the interior of planets to unraveling the fast processes involved in magnetization, researchers are turning to XFEL systems such as the Linear Coherent Light Source (LCLS) at SLAC National Accelerator Laboratory to gain insights into many natural phenomena. One of the most intriguing areas of research involves investigations into the atomic-level structural details of proteins—the molecules of life.

Matthias Frank, Stefan Hau-Riege, and other Lawrence Livermore scientists are working with national and international colleagues to further our understanding of these mysterious macromolecules. To have an impact on this field, the Laboratory must bring together diverse expertise, including advanced molecular simulations and innovative sample preparation; elucidate processes important in XFEL diffraction, such as ultrafast dynamics; and conduct experiments on important light-sensitive proteins.

The structure of a biological macromolecule, such as a protein or DNA, is often directly related to its biological function. Therefore, determining the atomic structure and dynamic changes of the structure of a protein—including large protein complexes—is key to understanding the role such proteins play in important biological processes. Membrane proteins are of particular interest, given that they perform many vital functions in cells. For instance, receptor proteins in a cell’s membrane relay signals between the cell’s external and internal environments, while transport proteins move molecules through the membrane. Cell adhesion protein molecules allow cells to identify each other and interact—a critical function in immune response. Membrane proteins of all kinds are paramount in medicine, representing the targets for well over half of today’s therapeutic drugs.

Many techniques are used to examine the structures of proteins and other biological macromolecules, with synchrotron-based x-ray crystallography being one of the most common. In this method, x rays created in a synchrotron bombard a sample of crystallized protein. As the x-ray photons pass through the neatly arrayed crystals, some are diffracted, forming two-dimensional diffraction patterns that are recorded by imaging x-ray detectors. From such two-dimensional patterns obtained from various irradiation angles, researchers can build a three-dimensional picture of electron density in the protein molecules and from that determine molecular structure. However, the x rays damage the molecules they interrogate, and this damage must be mitigated by using a relatively large crystal (typically 50 micrometers or more in diameter), limiting exposure, and distributing the damage over a large number of protein molecules. In addition, not all proteins form crystals of sufficient size and quality for conventional x-ray crystallography. For instance, most of the proteins in the lipid layers of a cell membrane do not easily form crystals large enough or ordered enough for this technique. Thus, the structures of the vast majority of these important macromolecules remain unknown. Of the more than 100,000 solved protein structures listed in the National Protein Data Bank, only about 600 are structures of membrane proteins, and of those only about 100 are from human membrane proteins.

In work conducted at Livermore and elsewhere, XFELs are providing new ways for researching these important proteins. Using the x rays from XFELs, scientists can obtain diffraction patterns from small (submicrometer) protein crystals at room temperatures and build high-resolution three-dimensional (3D) images of their structures, even capturing how their structures change on short timescales following external stimuli. X-ray pulses from XFELs are so short and intense that useful diffraction patterns are produced before the radiation destroys the crystals—“diffraction before destruction,” as the principle has been called. “We are using Livermore’s world-leading high-performance computing resources to alleviate the effect of radiation damage,” says Hau-Riege, who uses complex molecular dynamics codes—developed in support of the Laboratory’s national security mission—to understand damage dynamics in the proteins at the atomistic level and learn how to suppress, delay, or computationally correct the worst effects of radiation damage.

Given that each microcrystal exposed to an XFEL pulse is destroyed and that many diffraction images from such microcrystals of a protein are needed to determine the high-resolution 3D structure, the bioimaging community developed a serial data-acquisition approach, called serial femtosecond x-ray crystallography (SFX), for capturing a large number of diffraction patterns from individual microcrystals. In SFX, microcrystals flow in a stream of water, lipid, or other fluid that keeps the protein crystals hydrated. These microcrystals are, one by one, exposed to intense femtosecond XFEL pulses at the repetition rate of the XFEL (120 hertz in the case of LCLS), and a large number of diffraction patterns from randomly oriented crystals are captured. “In this way, we can collect hundreds of thousands of x-ray diffraction ‘snapshots’ in a matter of hours,” explains Frank. 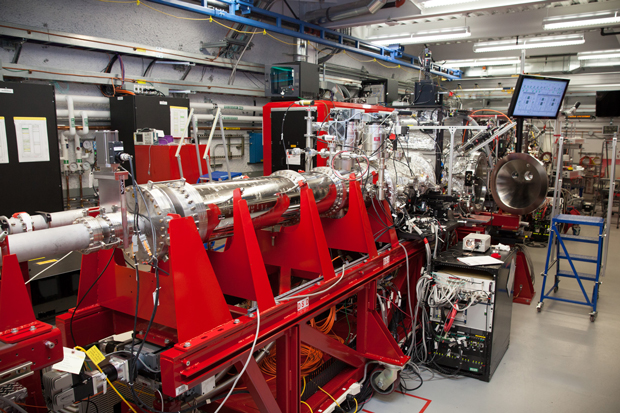 The coherent x-ray imaging instrument at LCLS is a key instrument in the scientific community’s research on using x-ray free-electron lasers (XFELs) to determine protein structure. X rays with wavelengths shorter than 10 nanometers are produced by a process of self-amplified spontaneous emission, yielding pulses of high beam intensities and laserlike properties. These ultrashort wavelengths enable the interrogation of proteins previously out of reach of crystallography. (Photograph courtesy of SLAC.)

“Photosystem II is a pivotal protein that changed life on Earth by allowing the production of oxygen,” explains Frank. One of the main proteins responsible for splitting water during photosynthesis, photosystem II successively absorbs four photons and uses this energy to split water molecules into oxygen and hydrogen. An international team of researchers from institutions including Arizona State University, Lawrence Livermore, SLAC, Germany’s Deutsches Elektronen-Synchrotron and Max-Planck Institute, and Sweden’s Uppsala University used the LCLS XFEL system and the SFX technique to explore the oxygen-conversion process of photosystem II. The team collected more than 5 million raw detector frames and selected the best 53,000 frames to determine the structural differences between its unpumped (dark) state and its double-pumped state (after two photons are absorbed). They determined structural changes in the center of the molecule, where its four manganese ions reside.

In another international collaboration involving XFEL experiments at LCLS, researchers used SFX to study microcrystals of photoactive yellow protein. This light-sensitive protein found in purple bacteria senses specific wavelengths of light, functioning much like a primitive eye. When the protein absorbs a photon in the blue spectrum of light, its structure changes on timescales ranging from picoseconds to milliseconds. Using SFX, the team resolved crystal structures of some of the shorter-lived intermediate states, yielding the highest resolution protein snapshots ever taken with an x-ray laser. [Livermore’s participation in this work was funded by the Laboratory Directed Research and Development Program and the University of California (UC) Lab Fees Research Program.] Success in these and other experiments opened the way to probing structural changes on even shorter timescales.

Among the developments Frank and others are exploring are new injection systems that do not require massive amounts of sample—currently one of the major drawbacks of the SFX approach. “The flow speed of the liquid water stream that passes through the x-ray beam path is relatively high, so a lot of sample passes through the x-ray interaction region in between the x-ray pulses,” explains Frank. As a result, only a very small fraction of the injected protein crystals in the liquid jet are probed by the x rays, wasting a lot of sample. For proteins that cannot be expressed in large quantities, a different approach is needed.

A possible sample-delivery system being developed at Livermore by Frank and colleagues at UC Davis takes a fixed-target approach. Known as fixed-target SFX, this technique uses an x-ray beam to scan samples deposited on a thin membrane. The first proof-of-principle results were obtained at LCLS using microcrystals from a virulence-related protein of Francisella tularensis, the bacteria that causes tularemia—a potential bioterror agent. The team started with a 200-micrometer-thick silicon wafer covered by a 50-nanometer layer of silicon nitride. Long, rectangular 200-by-8,400-micrometer windows were lithographically etched into the wafer from underneath the nitride layer, leaving 50-nanometer-thick silicon nitride membranes through which x-rays could be shot. A drop of emulsion containing the sample crystals was “painted” across the windows. Sample-loaded wafers were mounted onto a sample holder and moved in a precise manner through the LCLS beam, so that the samples in each window were exposed to 8-kiloelectronvolt, 30-femtosecond x-ray pulses. The resulting diffraction patterns were then analyzed using the codes Cheetah and CrystFEL.

With this sample-delivery technique, experience has shown that approximately 100,000 hits and 10,000 good diffraction patterns are needed to build a high-quality 3D image of a protein structure. In an optimized fixed-target SFX experiment, Frank’s team showed that about 10,000 good hits can be obtained with around 140,000 shots at sample-covered substrates. “We showed that we could collect data at repetition rates that allow us to collect a complete data set during a single 12-hour shift at LCLS,” says Frank. 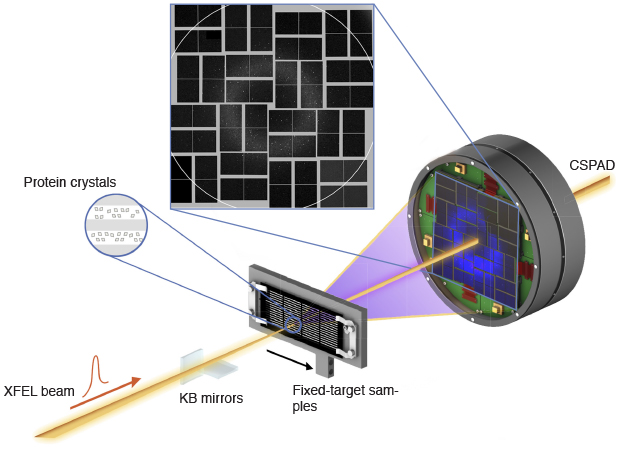 The fixed-target approach to identifying protein structures with XFELs opens the door to serial femtosecond crystallography with ultralow sample consumption and high resolution. This technique is therefore ideal for proteins not suitable for investigation with conventional crystallography, such as those that are small or difficult to crystallize in large quantities. The Kirkpatrick–Baez (KB) mirrors focus the x-ray beams onto the sample, and diffraction data are recorded by the Cornell–SLAC Pixel Array Detector (CSPAD). The large inset shows a protein’s diffraction patterns obtained with a single XFEL shot.

Issues remaining to be resolved with the fixed-target method include protecting protein crystals from the vacuum of the XFEL sample chamber, optimizing alignment of the crystals, and increasing peak and average shot rates. These issues, however, have not stopped structural biologists from jumping on the XFEL bandwagon, as evinced by the many journal papers describing research that uses XFELs to delve into the mysteries of structural biology. Meanwhile, researchers at Livermore and elsewhere continue to explore ways to capture these elusive structures. “We’ve demonstrated that we can also obtain high-resolution x-ray diffraction patterns from 2D protein crystals at room temperature,” states Frank. Many membrane proteins that have resisted traditional crystallization have shown to more readily form 2D crystals. “This work is a critical step towards future time-resolved pump–probe experiments where we can study the dynamics of externally induced changes in proteins.” The key is in the lock and turning. Before long, scientists will be able to capture fast changes in the structures of membrane proteins, viruses, and other small, elusive biological entities in near-native environments and in real time. By finally unlocking the door to a once mysterious world, these achievements will have far-reaching benefits in medicine, biosecurity, and other areas where small molecules can have a big impact.