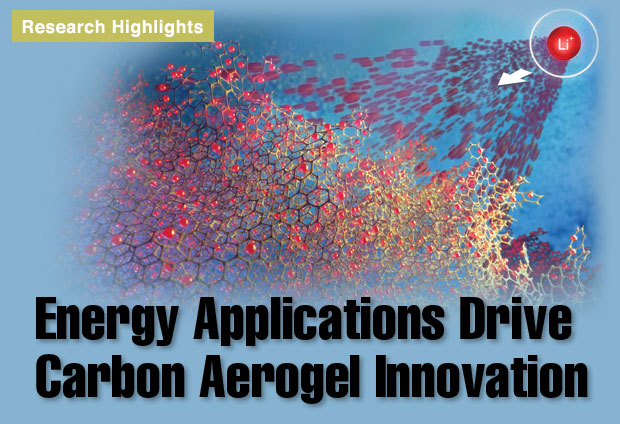 Because of their high surface area, electrical conductivity, and compressibility, the newest members of the carbon aerogel family—carbon nanotube and graphene aerogels—show great promise for energy storage applications such as batteries and capacitors. Shown is an artist’s rendering of lithium ion storage on graphene sheets. (Rendering by Ryan Chen.)

For decades, Lawrence Livermore researchers have refined methods for bringing together the best features of two remarkable materials, carbon and aerogels. Aerogels are networks of nanometer-sized particles that are interconnected to create sturdy, low-density, high-surface-area foams. The marriage of carbon and aerogels produces three-dimensional (3D) materials suitable for battery electrodes, catalyst supports, and other applications in the energy realm, thanks to their high surface area, open-pore structure, fine pore size, electrical conductivity, environmental compatibility, and chemical stability.

Two recently discovered forms, or allotropes, of carbon offer an opportunity to improve upon these properties. Graphene, a single sheet of carbon atoms, and carbon nanotubes, made of one or more graphene sheets rolled into a tube, have attracted interest in the scientific community because they offer a combination of mechanical robustness, excellent electrical conductivity, and high surface area, outshining other carbon allotropes. However, use of these promising materials has been hindered by difficulties with organizing multiple nanotubes or sheets of graphene into functional 3D structures, while retaining their special properties. Aware of this need, Livermore researchers have demonstrated that their time-tested aerogel synthesis technique can be adapted for use with these newer allotropes. This approach is enabling them to craft superior materials for energy applications.

When chemical engineer Marcus Worsley joined the Advanced Materials Synthesis (AMS) Group in the Physical and Life Sciences Directorate in 2006, the researchers were striving to create a carbon-based material that could meet the demanding requirements for onboard vehicle hydrogen storage. Group leader Ted Baumann says, “We needed a better carbon structural framework for energy storage applications, both when it came to basic building blocks and to the extended network.” Worsley, who became interested in nanotubes in graduate school, suggested using single-walled carbon nanotubes in an aerogel.

“The original method of making nanotube structures involved creating a suspension of nanotubes in water, freezing them, and then removing the ice,” says Worsley. “The nanotubes would be held together by physical interactions, but the material would not be very strong.” In addition, this method reduced both the surface area and elasticity exhibited by the individual nanotubes. Alternatively, binder materials could be added for structural reinforcement, but most of these materials diminished the electrical or thermal properties of the nanotubes. Worsley’s solution was to use sol-gel chemistry to make a conductive aerogel-based “glue” for holding the nanotubes together.

Sol-gel chemistry, a standard method for making aerogels, involves the reactions of chemicals in solution to produce a suspension of nanometer-sized particles, also known as a sol. (See S&TR, May 2005, Novel Materials from Solgel Chemistry.) The particles in the sol crosslink to form a 3D solid network called a gel. An aerogel is created when the liquid in the pores of the gel is removed using a special drying process. Because the individual particles in the aerogel network are held together through chemical bonding, the material is stronger than that produced with the freezing method. Further, the process is flexible and enables scientists to customize the structure, properties, and composition of the resulting aerogel. Molds or templates can be used to imbue the material with specific structural features, and additives can be incorporated to enhance the material’s electrical, thermal, or mechanical properties.

When the AMS team introduced a few carbon nanotubes into a standard carbon aerogel solution, they noted that the aerogel particles attached to the walls of the nanotube bundles and successfully bound them together. After gradually changing the proportions through a series of experiments, the team eventually arrived at a mixture that was mostly carbon nanotubes with a sparse population of aerogel particles. This carbon nanotube aerogel was mechanically robust, highly compressible, and more electrically and thermally conductive than carbon nanotube 3D structures created through other methods.

“Over time,” explains Baumann, “graphene replaced carbon nanotubes as the material of choice because it has more favorable properties for energy storage, such as higher surface area.” Worsley found a creative way to assemble 3D foam structures using graphene building blocks while maintaining many of graphene’s desirable properties. Other researchers typically have made 3D graphene structures using the same method they have used to make carbon nanotube assemblies—by suspending graphene oxide nanoparticles in water and then freeze-drying them. This method, however, yields small, low-quality crystal structures with poor physical properties. Worsley and his AMS colleagues used their carbon-nanotube-aerogel synthesis technique to make graphene aerogels bound solely through intermolecular attraction with 100 times better electrical conductivity than 3D graphene structures. The Livermore approach is also more scalable and much less costly than other 3D graphene synthesis methods.

Worsley and University of California (UC) at Berkeley professor Alex Zettl have since led a successful effort to enhance the physical, mechanical, and electrical properties of graphene aerogels. By baking the newly formed graphene aerogel in helium at temperatures between 1,500 and 2,500°C, the scientists produced a material with far fewer structural defects and 10 times larger crystals—up to 150 nanometers in diameter—than previously reported graphene aerogels.

“Graphene has a very specific Raman spectroscopy signature,” notes Worsley. “We found that by heating the graphene to about 2000°C, its Raman signature changes. Basically, we are crystallizing the aerogel to the point where it looks like single-sheet graphene.” By improving the quality of the individual graphene sheets comprising the aerogel assembly through the extra heating step, the team can produce superior bulk aerogel materials. The new aerogels are not only more stable at higher temperatures but also up to 10 times as conductive and up to 14 times as stiff as other graphene oxide-based aerogels.

Three-dimensional (3D) graphene structures are created using sol-gel chemistry and “baked” to achieve high-quality crystals within the graphene sheets. Their properties approach those of individual graphene sheets isolated through exfoliation, the optimal method for producing graphene.

From Test Tube to Patent

The AMS Group’s original and technologically relevant carbon-nanotube and graphene-aerogel synthesis work has generated a portfolio of intellectual property that the Laboratory has begun licensing and using to develop partnership and cooperative research agreements with industry. Annemarie Meike, a business development executive in the Laboratory’s Industrial Partnerships Office (IPO), has spearheaded the commercialization efforts for these materials. She observes, “Worsley’s work results in strong patents because it can serve as a base material for many applications. It is not unusual to see a delay before a new technology’s applications and processes emerge. However, because Livermore is known for its aerogels, and the materials have been commercialized in the past, Worsley’s work is generating a great deal of interest at an early stage.”

Hannah Farquar, an IPO market research analyst, notes, “After two scientists from the University of Manchester were awarded the 2010 Nobel Prize in Physics for their graphene experiments, many scientists began exploring how to make the promise of graphene a reality, which required the right technology for the right application. Marcus’ work was innovative and, just as importantly, he had a plan for moving forward with the technology.” Over the past several years, Worsley has worked with IPO, other colleagues, and potential industrial collaborators and licensees to identify and develop the most promising applications for graphene and carbon nanotube aerogels. These applications include hydrogen storage, electrical energy storage, catalytic support in fuel cells, and desalination using capacitive deionization.

While carbon aerogels have been used in all of these research areas before, the new materials offer additional benefits. “The more surface area the aerogel has for a given volume, the more energy it can store,” explains Worsley. “Not only does graphene have greater electrical conductivity and energy and power densities for a given mass than other options, but it’s also compressible. Because aerogels are very low density, they can occupy a lot of space, but ours can increase in density by eight times without losing performance.”

Each application has necessitated some customization of the new materials’ structure and properties. For example, both the surface area and the pore structure of traditional carbon aerogels needed to be modified to meet the challenging material requirements for onboard vehicle hydrogen storage. To this end, Livermore researchers, in conjunction with researchers at the California Institute of Technology, have used thermal activation. The controlled burn off of carbon from the aerogel structure in an oxidizing atmosphere creates new micropores (smaller than 2 nanometers) that serve as favorable sites for hydrogen uptake.

In addition, aerogels used in electrodes need very high energy densities for practical applications. Livermore researchers from the AMS and Nanoscale Integration Science and Technology groups teamed up to successfully coat the surface of graphene aerogels with anthraquinone and other molecules that undergo reduction–oxidation reactions. These coatings have yielded up to a three-fold increase in capacity for energy storage devices such as batteries and supercapacitors.

Finally, as supportive structures for catalysts, the surface of an aerogel must be modified with the addition of catalytic nanoparticles. (See S&TR, April/May 2009, Improving Catalysis with a “Noble” Material.) The AMS Group, in partnership with UC Berkeley professor Roya Maboudian and her research team, has produced hydrogen-sensing, platinum-decorated graphene aerogels with high catalytic efficiency at a reasonable cost.

Meanwhile, the AMS Group continues to explore how to build a better aerogel. Currently, the researchers are targeting the pore networks of graphene aerogels, which, until now, have had a fairly random structure. With an engineered structure, realized through 3D printing, these aerogels could achieve even better performance. The researchers have been collaborating with Chris Spadaccini’s additive manufacturing team to develop a printable graphene-based ink and modify a 3D printing method called direct-ink writing to accommodate aerogel processing. Preliminary results are promising. The 3D-printed graphene aerogels produced thus far with this method are lightweight, highly conductive, and extremely compressible. In addition, their structural integrity can be maintained over multiple compression cycles.

Zettl’s team, in conjunction with AMS researchers, has created the first boron nitride aerogels using high-quality graphene aerogels as a template. Boron nitride is typically a two-dimensional material with a similar structure to graphene. Its high thermal conductivity and thermal stability make it attractive for sensor applications. Worsley says, “For the first time, we were able to convert the graphene completely to boron with no leftover carbon, because the low porosity and high surface area of our graphene aerogels creates very little bulk material and enables more efficient conversion.” 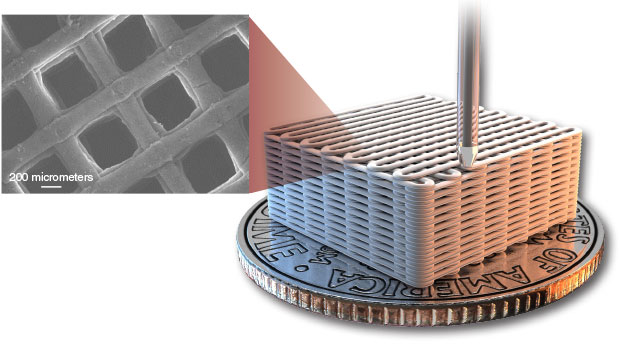 Three-dimensional printing technology can be used to create graphene aerogels with a highly ordered pore structure and thus more predictable properties. An artist’s rendering of a printed 3D aerogel microlattice is shown with (inset) a scanning electron micrograph of the actual structure.

Carbon nanotube, graphene, 3D-printed graphene, and boron nitride aerogels mark the latest in a long line of remarkable aerogel accomplishments (see the box above) motivated by the institution’s and the nation’s security, energy, and scientific needs and made possible by the AMS Group’s aerogel architects. Baumann says, “It is very satisfying to see the materials we create put to use.”