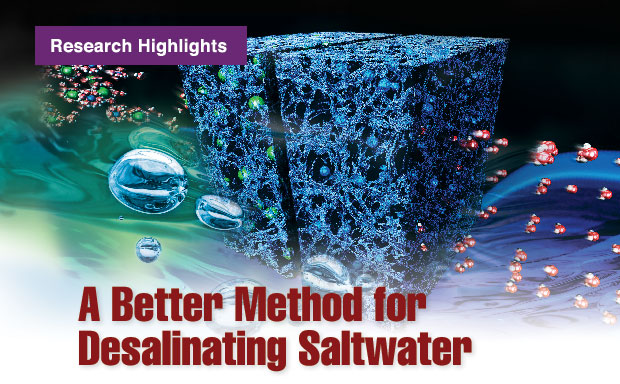 Flow-through electrode capacitive desalination (FTE-CD) uses a new hierarchical porous carbon material to create a device geometry in which the feed stream passes directly through the electrodes, resulting in significant improvements to the salt- removal rate. In this rendering, saltwater enters the carbon aerogel electrodes (blocks of porous material) on the left, leaving behind sodium (green dots) and chloride (blue dots) ions. The clean water exits on the right. (Rendering by Kwei-Yu Chu.)


In “The Rime of the Ancient Mariner,” Samuel Taylor Coleridge writes,

Water, water, every where,
nor any drop to drink

capturing perfectly the dilemma we face when looking to the ocean for drinking water. Oceans cover 70 percent of Earth’s surface and make up 97.5 percent of the world’s water, yet this water is of no use to the more than one billion people who don’t have access to clean water.

As the population continues to increase, the demand for freshwater for use in industry and households is increasing. At the same time, freshwater supplies are decreasing as glaciers melt, rivers become polluted, and freshwater is simply wasted. Water scarcity is a national security issue, and new sources of freshwater are essential to ensuring peace and prosperity on a worldwide scale.

One solution to the problem is desalination. Many areas that do not have access to potable water do have access to salty water such as seawater, brackish surface water, or groundwater. If a cost-effective way to extract the freshwater could be found, many cities, states, and countries could solve their water problems.

Physicist Michael Stadermann was originally investigating how the pore structure of carbon materials affects the performance of capacitors for energy storage, when chemist Ted Baumann showed him a new carbon aerogel with some interesting properties. Aerogels, a special class of ultralow-density materials, have a complicated, cross-linked internal structure that gives them the highest internal surface area per gram of any known material.

The new carbon aerogel has the electrical properties of traditional aerogels but has much larger pores with diameters of micrometers versus nanometers. It also is mechanically robust and can be machined and fabricated into different sizes and shapes.

A key feature of this aerogel is that the walls of the big pores are themselves porous, with pores just nanometers in size. Hierarchical porosity allows water to easily flow through the large pores at low pressure, while the small pores give the material an enormous surface area. One gram of the aerogel contains up to 3,000 square meters of surface area, an area equal to more than 10 tennis courts.

This new aerogel did not quite meet the specifications for energy storage that Stadermann required for his original project, but it does look promising for capacitive water desalination. In capacitive desalination, saltwater flows through a capacitor with two electrically charged electrodes, and the positively and negatively charged sodium and chloride ions that make up the salt are captured on the surface of these electrodes. The aerogel is an ideal material for the electrodes because it is porous enough to let the water through and has a vast surface that can hold the ions.

Stadermann and Baumann, along with Lawrence Scholar Matthew Suss and his advisor at Stanford University, Juan Santiago, began exploring how to optimally use the material in capacitive desalination. Capacitive desalination using carbon aerogels was pioneered at Livermore in the 1990s. The first devices used aerogels with small pores, and the water flowed between the electrodes. The method required long desalination cycles and could only treat moderately brackish water in a single charge. In another method, initially proposed in the 1970s, water flowed directly through the electrodes. That method failed because the electrode materials were unreliable.

Because the new carbon aerogel has such large pores, the researchers wondered if they could use monolithic aerogel materials with flow-through electrodes. Their idea was to build a capacitor with two hierarchical carbon-aerogel electrodes. The water would flow through the entire capacitor instead of through a small channel between the electrodes. Thus, the capacitor could potentially desalinate more water in a shorter period.

This micrograph of carbon aerogel shows that the pores in the FTE-CD module are large enough to let water through. (inset) The walls of the big pores are themselves porous. These smaller pores give the material its enormous surface area.

Suss developed a computer model to explore the feasibility of the idea. When the model showed that significantly faster and more efficient desalination could be achieved by flowing water through the electrodes, he built a prototype flow-through electrode capacitive desalination (FTE-CD) module. When a small potential (about 1 volt) is applied to the capacitor, the entire internal surface of the aerogel electrostatically attracts salt ions: sodium ions to the negative electrode and chloride ions to the positive electrode. As the pump pushes in more saltwater, the freshwater is flushed out, and more and more salt is captured in every electrode. Because the water now flows through the entirety of each electrode, all the desalinated water that was formerly trapped in the aerogel can be collected.

When the module’s surface becomes saturated with salt, it can be cleaned by simply removing the voltage. The charge can be used again by transferring it to another module, thereby recovering the energy, and the ions can be released into the remaining water and rinsed out.

A single module can serve as one stage of desalination. As the water becomes less salty, it can be moved into a new module. Ocean water can be desalinated in eight passes, and brackish water such as that from river mouths, saline aquifers, or wastewater can be desalinated in two or fewer passes. Experiments using FTE-CD modules showed that the device removes three times as much salt per charge and desalinates water 10 to 20 times faster than other capacitive devices.

Looking back to the start of the project, Stadermann says, “Desalination is not the kind of work the Lab typically does, but we’re good at it because we have the infrastructure and a history in this field. With drought throughout the Midwest, our research is in the national interest and within the scope of a national laboratory.” 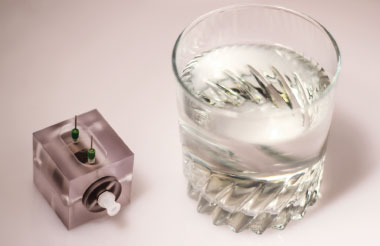 This prototype FTE-CD module, shown next to a glass of water for scale, provides one stage of desalination and can be coupled with more modules, depending on the level of desalination desired. The size and shape of the module could be made compatible with those in reverse osmosis plants and could conceivably be used in retooling such a plant.

Desalination plants require so much infrastructure and energy that they are only cost effective at a large scale, but a great need exists for smaller operations. FTE-CD modules are quite scalable and can be used individually or in stages. They require very little energy to charge the capacitors and very little pressure to pump water through the modules. The energy is simply stored in the capacitor, so it can be easily recovered or transferred to other modules. Furthermore, because desalination is done in stages, the salinity of the resulting water can be precisely controlled.

The team is continuing work on improvements to the FTE-CD modules. Solar power could potentially be used as the energy source. Also, researchers could develop a gravity-fed module to force water through the capacitors.

A wide range of possible applications exist for the FTE-CD modules including for industries that use partially desalinated water for their processes. The military might provide soldiers with small desalination units for their packs, or slightly larger desalination systems could be carried in military transport vehicles. Other possible applications include using the modules to filter water in disaster areas or to soften household water supplies.

Some industries require large amounts of water and are looking at ways to switch from freshwater to brackish water or ocean water. For example, FTE-CD could be used for hydraulic fracturing, or “fracking” as it is commonly called, where large amounts of water and other fluids are forced through shale or other rock formations to release petroleum or natural gas. Salinity of water used for fracking can rise to more than three times the level of seawater, but the FTE-CD modules could keep the salinity at a consistent and desirable concentration.

FTE-CD modules could be built to be compatible with membrane modules in RO systems, without the infrastructure needed to support RO. As the cost for FTE-CD decreases, RO modules could potentially be replaced with FTE-CD modules. Cost-effective, modular, and scalable desalination would solve one of the world’s most pressing problems, and FTE-CD is one tool that will bring us closer to the goal of freshwater for all.