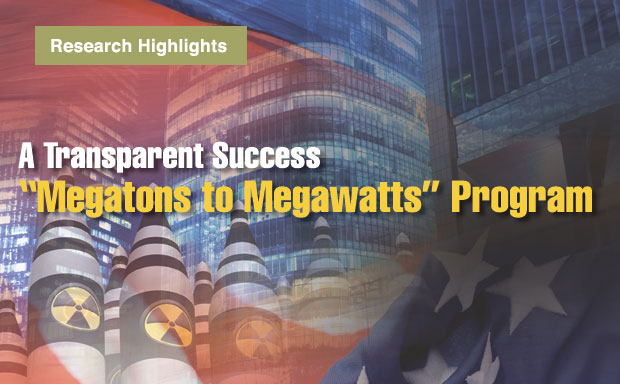 In 1993, the U.S. and the Russian Federation signed a historic nonproliferation agreement designed to permanently eliminate excess uranium from dismantled Russian nuclear weapons by “recycling” it into fuel for U.S. power plants. Now, just months away from its 20th anniversary, the 1993 U.S.–Russian Highly Enriched Uranium Purchase Agreement is within sight of its negotiated finish line: the conversion of 500 metric tons of highly enriched uranium (HEU)—an amount equivalent to approximately 20,000 nuclear warheads—into low-enriched uranium (LEU). The effort yielded enough reactor fuel to supply 10 percent of the annual electricity in the U.S. since 2000.

The agreement, which demonstrates the commitment of the two countries to their nuclear disarmament obligations as delineated in the Treaty on the Non-Proliferation of Nuclear Weapons, is an unqualified success, and many organizations and individuals deserve plaudits for its achievements. The Department of Energy/National Nuclear Security Administration (DOE/NNSA) and the Russian State Atomic Energy Corporation (Rosatom) negotiated and signed the purchase agreement and the associated implementation documents. The United States Enrichment Corporation (USEC) in the U.S. and Techsnabexport (TENEX) in Russia act as Executive Agents to the agreement and implement the commercial aspects of the program. The national laboratories, including Lawrence Livermore, also play key roles in this international effort, most notably in the monitoring activities that ensure the nonproliferation objectives of the agreement are being met.

Transparency from “Soup to Nuts”

Early in the agreement’s history, both countries realized it was vital to set up a process for building confidence that the HEU weapons material was actually being converted to LEU and then further refined into a form suitable for nuclear power. Such an effort required that the conversion processes and the flow of materials be transparent to both countries. DOE/NNSA and Rosatom established the HEU Transparency Program to develop and implement the necessary protocols.

According to Dan Decman, Livermore’s program manager for the HEU Transparency Program, Laboratory personnel coordinate the presence of the U.S. monitoring team and the U.S. equipment required to verify the irreversible conversion. The U.S. monitoring team includes Livermore staff, and the Laboratory is the repository for monitoring data gathered by the team. Additionally, Livermore is responsible for providing health and safety (H&S) support for all U.S. team members.

“The HEU Transparency Program requires that both Russian and U.S. monitors have access to the uranium-processing facilities of each other’s countries,” says Decman. Russian monitors are allowed access to the Portsmouth Gaseous Diffusion Plant in Piketon, Ohio (which was used by USEC for processing the Russian uranium until May 2001), the Paducah Gaseous Diffusion Plant near Paducah, Kentucky (which was used for uranium enrichment after Portsmouth), and four U.S. fuel fabrication facilities. In turn, U.S. monitors are allowed access to four Russian Federation facilities: Siberian Chemical Enterprises in Seversk, Mayak Production Association in Ozersk, Ural Electrochemical Integrated Enterprise in Novouralsk, and Electrochemical Plant in Zelenogorsk. For Decman and others, several trips to Russia are required each year to verify the material conversion and flow of uranium. The duration of a trip is typically one week, but some past visits have been as long as two months.

The U.S. team is involved in monitoring the entire process in Russia, from “soup to nuts.” The Russian HEU starts its journey through the HEU Transparency Program when it arrives in sealed containers at Seversk and Ozersk from the Russian weapons dismantlement sites. The material is in the form of actual weapons parts, so the U.S. monitors must interrogate the contents of the containers and determine what materials are inside as well as the percentage of fissile uranium (uranium-235) without breaking seals or otherwise breaching the containers. Decman says, “We inspect these initial containers, including their seals and receipt documents, and nondestructively analyze the uranium inside to confirm its weapons-grade status.” These analyses are performed using a Livermore-developed nondestructive assay (NDA) system (described in “Getting the Assay” below).

Next, the shavings are burned in gloveboxes to create oxides. The U.S. monitors can observe the entire oxidation procedure—from the initial feed into and withdrawal from the oxidation equipment to the final analysis of the withdrawn oxides. The monitors apply U.S. tags and seals to the oxide canisters, which are then shipped to Novouralsk or Zelenogorsk for fluorination and blending down. Fluorination and blending down also occur onsite at Seversk.

In the fluorination process, the oxides are converted into uranium hexafluoride gas. This gas is combined with “blendstock” LEU, which is very low-enriched uranium containing 1.5 percent of uranium-235. The end result is an LEU product that contains 5 percent or less of uranium-235 and is suitable for reactor fuel. The original HEU is about 90 percent uranium-235.

Collecting the data that demonstrate how much uranium-235 exists at each step in the process is challenging. In 1996, the U.S. and Russia agreed on the use of NDA equipment to provide uranium enrichment meter measurements for the HEU Transparency Program. In the enrichment meter method, the enrichment of a sample is proportional to the rate of the 186-kiloelectronvolt gamma rays emitted by the uranium-235. The method, which has been in use since the 1970s, works well for measuring bulk, homogeneous uranium samples. It is the standard technique for uranium enrichment measurements for the International Atomic Energy Agency and has a well-established track record.

Livermore’s portable NDA system uses a collimated sodium iodide scintillation detector, a portable multichannel analyzer, and a laptop computer. Each NDA system is calibrated with uranium standards either at Livermore or at the Y-12 National Security Complex in Oak Ridge, Tennessee. The U.S. monitors have used these systems since 1997, taking between 2,500 and 3,000 measurements annually.

Since 1999, the program has also used NDA equipment to continuously monitor the blend-down process. The blend-down monitoring system (BDMS), developed by Oak Ridge and Los Alamos national laboratories, measures the enrichment and uranium-235 mass flow rate of the uranium hexafluoride gas as it is mixed with blendstock-LEU and then blended down to form product-LEU. “The blend down is a critical step in the process, and monitoring this material transition satisfies one of the primary nonproliferation goals of the HEU Transparency Program,” says Decman.

Developers of the NDA systems faced the unusual challenge that the equipment had to be low-tech for the program. “At the national laboratories, we’re used to implementing the ‘latest and greatest’ technology,” says Decman. “However, the systems developed for this program had to be simple, and they had to be reliable. The blend-down monitoring systems, which are deployed in Russian plants, need to operate continuously, with very limited access available to the U.S. monitors. The systems also had to be modular in design to accommodate maintenance and repairs in a timely manner.”

The conversion process of Russian HEU into LEU suitable to fuel U.S. nuclear power plants is monitored by teams from the U.S. and Russia at key points in the process. (UF6 is uranium hexafluoride, and UO2 is uranium dioxide.)

An Eye on Health and Safety

The Laboratory provides H&S support to the HEU Transparency Program and to all U.S. monitors, including interpreters, who make the long trek to the heart of Russia. Since 1998, Livermore’s Radoslav Radev has been the leader of the H&S efforts and has helped to develop a comprehensive H&S Plan, now in its 11th edition. “The plan has evolved as the conditions and regulations in Russia have changed,” says Radev.

Included in the plan are the types of radiological and industrial exposures one could encounter from plant to plant, H&S training requirements, and administrative and engineering controls to mitigate potential hazards. The plan also provides information to help monitors acclimate to travel in Russia such as occupational safety signs that may be encountered and general tips on industrial H&S while working in Russian facilities. The H&S Plan is available to monitors 24/7 on the Web.

Livermore is also responsible for external and internal dosimetry service for all U.S. monitors. The Laboratory provides and analyzes thermoluminescent dosimeters that measure radiation doses from external sources. Radev notes that the dosimetry is complicated. “We have to take into account how extended airborne travel at high altitudes and multiple exposures from airport x-ray security screening affect the measurements,” says Radev. “Also, some security personnel, particularly in airports, are unfamiliar with the dosimeters carried by U.S. monitors. We’ve had cases in which the traveling dosimeters have been questioned, delayed, and even removed.” Because monitors are not allowed to enter a nuclear facility without a dosimeter, emergency dosimeters are maintained at two locations in Russia. “We have to be prepared,” says Radev. “Each trip is approved well in advance, and its duration and timing are fixed.”

At the conclusion of each trip, U.S. monitors provide a bioassay sample that is used by Livermore to determine any potential internal dose from uranium compounds that may have entered the body via ingestion, inhalation, or open wounds. Livermore’s external and internal dosimetry procedures are DOE-lab accredited and meet federal requirements. The Laboratory provides each monitor with an annual dose report and provides HEU Transparency Program management with post-trip dose reports, quarterly bioassay reports, and annual health physics reports.

This year, the U.S.–Russian Highly Enriched Uranium Purchase Agreement and the accompanying HEU Transparency Program are winding down in an orderly fashion and on schedule. The oxidation process is now in its last phase. Most of the fluorination will be complete by the end of summer. In the fall, the final blend downs will take place, bringing the program to an end. Decman notes, “This enduring mission over the years has been a team effort of many national laboratories and an amazing collaborative effort. It’s difficult to think of a similar program that has had this level of success over such a stretch of time.”

Both sides can no doubt agree that the two-decade effort has been a great achievement. Although the blend-down and monitoring activities are ending, Rosatom and TENEX plan to continue making LEU at their facilities, selling it directly to U.S. utilities. In fact, TENEX already has signed contracts to provide fuel for reactors in the U.S., once the agreement is completed. The HEU Transparency Program deserves a portion of the accolades for the agreement’s achievements. The efforts of Livermore and the other organizations involved served to assure both governments that the HEU did indeed come from dismantled weapons and the resultant LEU did indeed become reactor fuel. Thanks to the program, some of the world’s most destructive weaponry was converted into the very electricity that powers our homes, schools, factories, and businesses.